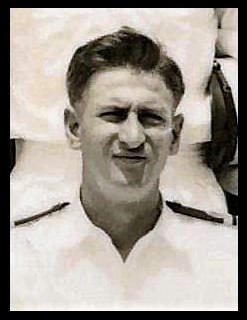 Peter James Arnold was born on 29 April 1932, in Perth WA, and enlisted in Royal Australian Navy (RAN) as a Cadet Midshipman on 01 January 1946. His first posting on 30 January was to HMAS Cerberus (Flinders Naval Depot) at Crib Point, South of Melbourne, where he joined the RAN College to begin his training.

As a 13-year old Cadet Midshipman, Arnold found college life to be busy and spartan – including sleeping in a hammock. But the college provided excellent educational opportunities, and fellow students kept fit with plenty of sport and training activities, including having to ‘double’ everywhere. Cadets who showed promise had the opportunity to pursue specialist training in the UK.

In December 1949, Arnold sailed to the UK on RMS Orontes. Promoted Midshipman (E) on 01 September 1950, he spent two years training with the Royal Navy (RN), concentrating on naval engineering. On 01 January 1952 he was made Acting Sub-Lieutenant. During his time with the RN Arnold was posted to six different training depots, including the Fleet Air Arm station HMS Vulture, and twice to the aircraft carrier HMS Indominable, ending with a three month course at the Royal Navy Engineering College, Plymouth, where he was selected for Air Engineering training [in 1954], and confirmed Sub-Lieutenant. On 30 April 1953 he embarked on RMS Strathmore for return to Australia.

Disembarking at (home port) Fremantle Arnold took FS Leave. His next posting on 10 July 1953 was to the County Class heavy cruiser HMAS Australia for work experience. Then on 25 January 1954 he was drafted to the aircraft carrier HMAS Vengeance where he qualified as a Watch Keeper. Around this time Arnold requested to do flying training on completion of his Air Engineering Course, but this was not approved.

On 07 August 1954 Arnold embarked on RMS Stratheden for the UK where he was posted to ‘Manadon’ the Royal Navy Engineering College at Plymouth, where he was promoted to Lieutenant on 01 April 1955, with the year-long A/E Course ending late in August 1955. On the 29th, Arnold (with wife Barbara) embarked on P&O Liner SS Himalaya for Australia.

The family arrived at HMAS Albatross, the Naval Air Station at Nowra (NAS Nowra) south of Sydney on 10 October 1955. Having passed the Air Engineering Course, Arnold renewed his request to undergo flying training. This was approved and on 07 January 1956 he was posted to RAAF Uranquinty where he joined a Basic Flying Training Course flying Tiger Moths.

After gaining experience with the Tiger Moths and completing flight safety and navigation tests, Arnold then transferred to RAAF Point Cook, near Melbourne, where he was enrolled in the Elementary Flying Training School, converting to the more advanced piston-engine Wirraway training aircraft. Upon successfully graduating from Pilots Course 25, on 03 March 1957, Arnold returned to NAS Nowra where he began an Operational Flying School 1 course; an advanced flying training program aimed at preparing pilots for front-line service.

Following the OFS course Arnold gained a wealth of experience at NAS Nowra when variously assigned to 851, 725 and 724 Squadrons, flying Sea Furies, Fireflies, Vampire Jet, including completing conversion to the Fairey Gannet anti-submarine ASW aircraft on 21 February 1958. In March 1958 he joined 816 Squadron, a front-line squadron, flying Fairey Gannet aircraft. 816 Squadron then embarked on the carrier HMAS Melbourne for exercises in 1958, and again early in January 1959 for several weeks ‘work-up’ exercises before disembarking to NAS Nowra. 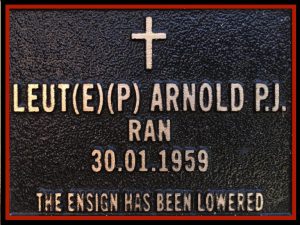 On 30 January 1959, Lieutenant Arnold was tasked to fly Fairey Gannet XA332 from the Fairey Aviation workshops at Bankstown to NAS Nowra. On route, according to witnesses at Miranda 19 km south of Sydney, sections of the tail unit were seen to fall from the Gannet, with the aircraft crashing into the ground in a ball of fire.  Peter James Arnold was killed leaving a wife and child. It was tragic end to a 13-year navy career, and a great shock to all.

The Gannets were immediately grounded for inspection, and a full Board of Inquiry and Coroner’s Inquest were established to examine the reason for the crash. While a dislodged cotter pin was a suspect, the exact cause of the empennage failure could not be determined.

You can read a little more about Gannet XA332, including the transcript to Board of Inquiry into Peter Arnold’s tragic crash, here.