Mansfield Barrymore Allan Brown was born on 23 January 1923 at Terowie, SA, the son of Mrs and Rev Allan Brown. He was educated at Prince Alfred College, Adelaide, on a Finian Scholarship. Later he was employed as a bank clerk at the Commonwealth Bank head office in Adelaide. On 6 December 1941 he enlisted in the Citizen Air Force (RAAF). The following day Japan bombed Pearl Harbour – then Darwin on 19 February 1942.

Brown, previously an Air Training Corps Cadet, signed-up for aircrew and was posted for basic training at nearby Parafield. Here he progressed through the courses, graduating as Aircrew V (P). On 25 June 1942, he was drafted as a Leading Aircraftsman to Bradfield Park, Sydney, for several weeks then to Ascot Vale, a training base near Melbourne prior to being posted to Canada on loan to the RCAF for further aircrew training.

Sailing from Melbourne on 29 July 1942, Brown arrived in Canada on 19 August and transferred to the Royal Canadian Air Force Depot at Edmonton. The next move, on 23 September 1942, was to No 1 Service Flight Training School at Calgary. On 31 December 1942 he was promoted to Sergeant and on 21 January 1943 was transferred to RCAF Vulcan, for further instruction at No 2 Flight training School, transferring to No1 Flight Training School at RCAF Macleod on 25 March 1943.

At some point after completing his training in Canada Brown went to the UK, where he was attached an RAF aircrew unit for further training, then for service with a squadron (details are unavailable due to a gap in records for 1944/5). At the end of WW2, Brown returned to Australia – disembarking on 29 September 1945. On 20 November he was promoted to Flight Lieutenant, then demobilised in December 1945.

Returning to Adelaide he went to University on a Creswell Scholarship; but then re-enlisted in the RAAF on 31 November 1946. Brown was posted to the Central Flying School at RAAF Point Cook where he took a General Service Training Course. Following that he began duties as a Flying Instructor, continuing until 6 January 1948 when he resigned from the RAAF.

A more active flying career was a likely motivation for Brown to join the RAN Fleet Air Arm (FAA), which was recruiting Pilots and Observers at the time. On 6 January 1948 he enlisted in the RAN FAA as a (probationary) Acting Lieutenant (P), and was drafted to HMAS Cerberus (FND), south of Melbourne, for a conversion course. On 14 June he was drafted to the destroyers HMAS Bataan and Quiberon for training in shipside duties and seamanship.

This ended on 11 September 1948 when he was seriously injured in a motor accident (in which his father died). Brown was admitted to Auburn and Concord Hospitals in Sydney, then transferred to Adelaide General Hospital (his mother lived in Adelaide), for specialist treatment until March 1949. He then returned to Cerberus for assessment and drafting to the cruiser HMAS Australia on 23 March 1949, where he was confirmed Lieutenant. 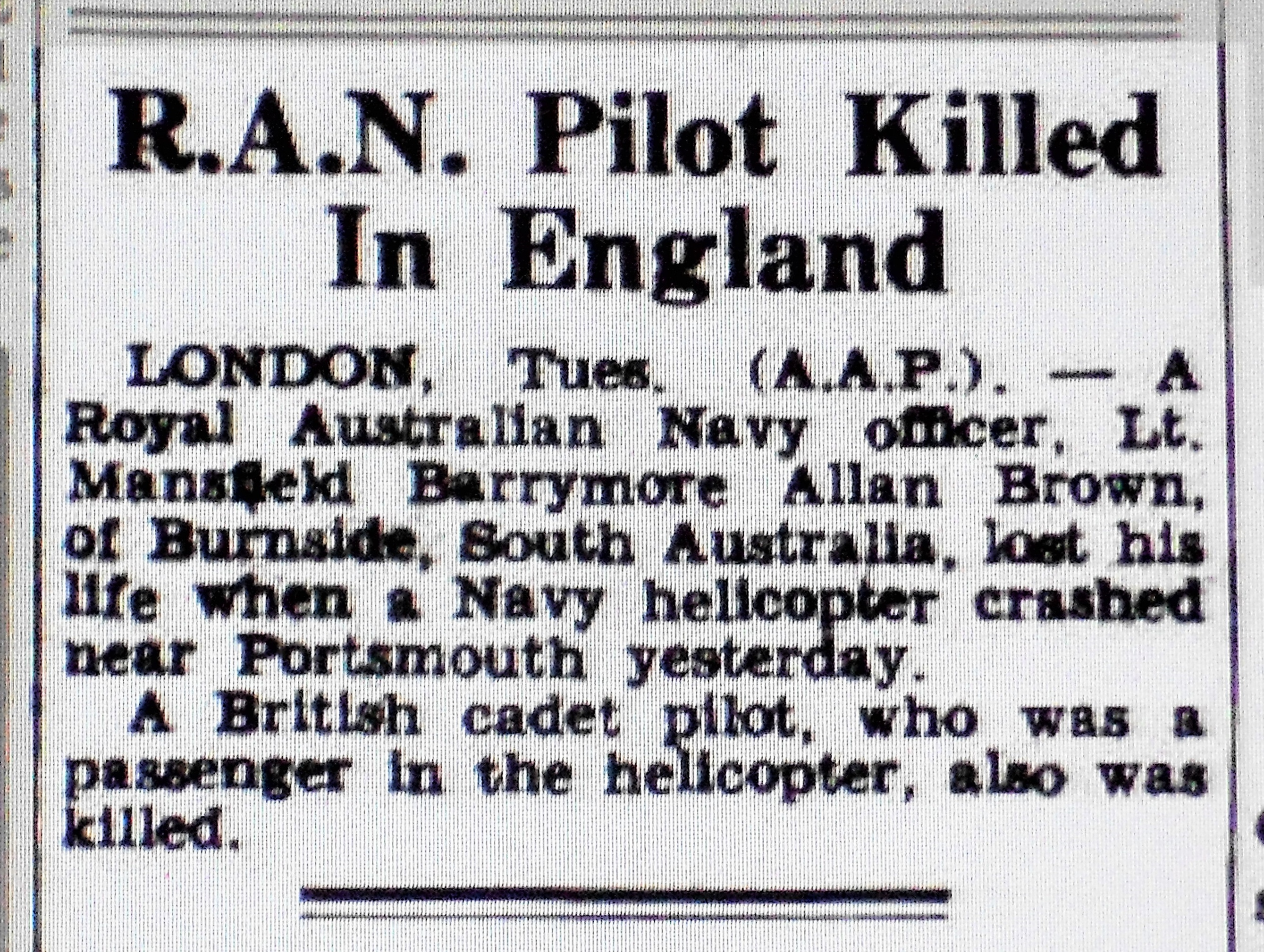 In March 1950 Brown was assessed fit for flying duties, and in May he attended a special navigation course at HMAS Watson. In June 1950 he took passage on the aircraft carrier HMAS Sydney 111 to the UK (Sydney was collecting the 21st CAG) for a refresher flying course with the RN FAA, converting to naval aircraft at HMS Daedalus RNAS Lee-on-Solent; then to HMS Fulmar RNAS Lossiemouth. In January 1951 he was drafted to HMS Siskin RNAS Gosport for a helicopter course with 705 Squadron. On 25 June 1951 Lt Brown RAN was killed flying a Westland Dragonfly helicopter, serial VZ961. The local newspaper reported the following:

Portsmouth Evening News, Monday 25 June 1951. ‘Machine explodes over Portchester. Two officers under training in HMS Siskin, Gosport were killed when their helicopter exploded and crashed into Cams Bay, Portchester, this morning. The machine, which was partly buried in the mud, was a Westland Sikorsky Dragonfly. It crashed about a quarter of a mile from Wicor School, but did not catch fire. The machine crashed from about 500 ft. Workmen from Wicor dump plunged through the mud in a rescue attempt, but found both men had been killed. Parts of the helicopter were scattered over an area of several hundred yards’.