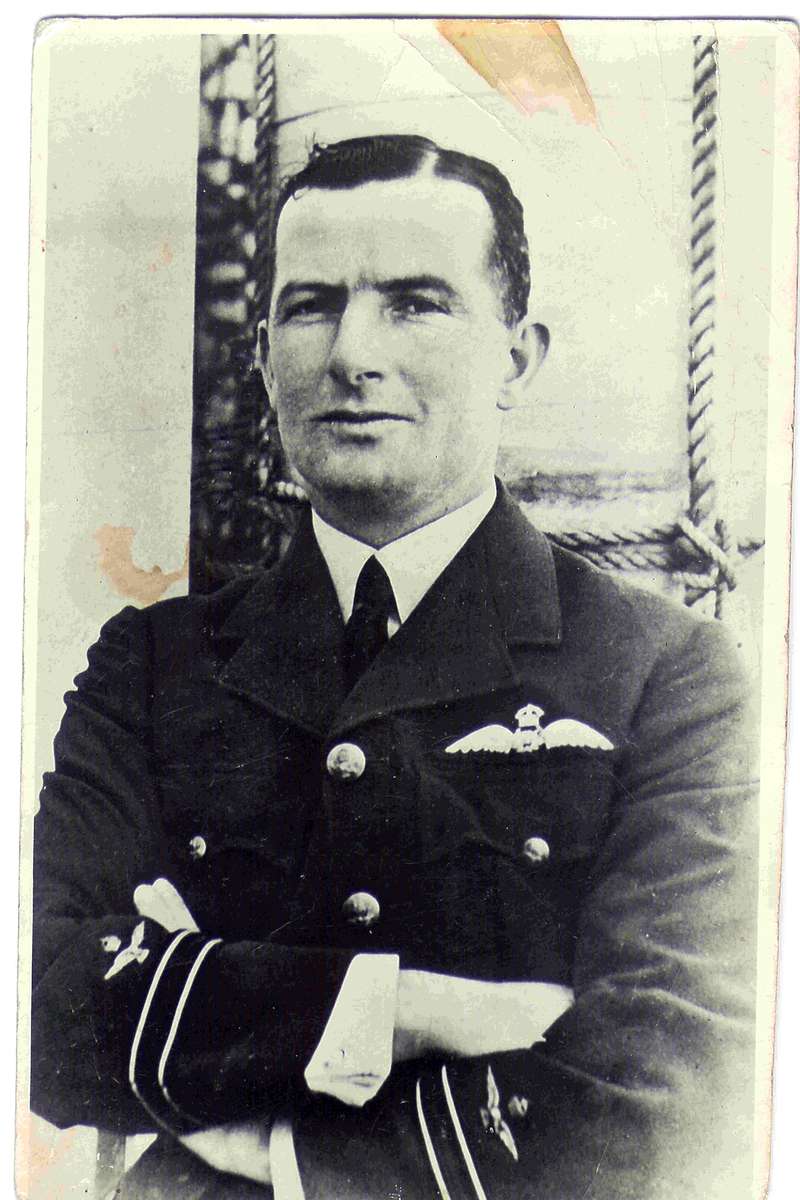 George J. I. Clarke was born on 22 September 1907, at Charters Towers, Qld., to George Thomas Clarke and Elizabeth Clarke. His father was killed at Gallipoli in 1915 and his mother married again; she is noted in next-of-kin as Elizabeth Bradford, Chatswood, NSW. There is no information about George Clarke’s childhood or schooling, but obviously he was a bright lad as he passed the tough entry examinations for admittance to the Royal Australian Naval College at Jervis Bay, NSW.

On 01 January 1921, Cadet Midshipman Clarke entered the RANC, HMAS Creswell, at Jervis Bay. The life of a junior Cadet was active with education of a high standard, and sports activities encouraged. When ‘Passing Our’ in December 1924 he won the prize for French and was promoted to Midshipman on 15 May 1925. To broaden his experience, ln 1926 he was posted to the cruisers HMAS Brisbane (1) and Melbourne (1). Early in 1926 he, with other Midshipmen, went to the UK for service and training on RN ships for the next two years. On 1 September 1927 he was promoted to Acting Sub-Lieutenant and Sub-Lieutenant on 16 April 1928. In May 1928 he was acknowledgement for his essays written for the Junior Officer’s War Course at Greenwich. He then spent the next two years serving on HMAS Canberra (1) and Australia (11). On 16 October 1930 he was promoted to Lieutenant RAN.

As a Midshipman Clarke had served on the aircraft carrier HMS Eagle in the Mediterranean and China Station, also HMAS Canberra and Australia had Seagull 111 amphibians embarked – the idea of a flying career would have been appealing. Because the RAAF provided the RAN with aircraft, pilots, and maintainers [the RAN supplied observers and telegraphist/gunners, with a few naval officers trained as pilots], Clarke took the opportunity to transfer to the RAAF for training with RAAF 101 Fleet Cooperation Flight. For the RAN ship-borne aircraft were important for reconnaissance, gunnery spotting, and submarine surveillance.

On 15 January 1930, Sub-Lieutenant Clark RAN was seconded to the RAAF for three years. In July 1932 he was drafted to HMAS Albatross, the RAN seaplane carrier, attached to RAAF 101 Flight, flying Seagull 111 amphibians. Because Albatross was about to be placed in reserve, his posting ended on 31 January 1933. Clark’s secondment to the RAAF was then extended for a further year. He was retrenched on 14 January 1934 thus ending his contact with the Navy – until WW11

As Clarke’s RAAF records (at the time of writing) have not been released, the date he was actually discharged is not known; but he remained on the reserve list of the RAAF. In the mid-1930s Clarke became a commercial pilot and was employed by W.R. Carpenter Aerial Service, which was part of a big trading company that had been active in New Guinea and surrounding islands since 1919. The W.R. Carpenter Aerial Service was later amalgamated with Mandated Airlines. When WW11 erupted on 2 September 1939, Clarke was recalled for service in the RAAF.

Flight Lieutenant Clarke joined RAAF 9 Flight Cooperation Unit, flying Seagull V and Walrus amphibians, based at Richmond. He then embarked on the cruiser HMAS Australia (11), under the command of Captain Robert R. Stewart. The first nine months of WW2 were spent on the Australian coast, followed by Australia performing convoy escort duties between Fremantle and Cape Town up to July 1940. Then sailing between Cape Town and Freetown, on the African West Coast, as part of the Dakar Squadron observing the Vichy French fleet. During this time Australia’s Seagull V A2-24 amphibian would have been in constant use. In July HMAS Australia sailed to the UK where her Seagull V was sent to Saunders Roe on 8 August 1940 for overhaul, and was replaced by Walrus amphibian L2247 on loan from the RN.

In September 1940 HMAS Australia took part in ‘Operation Menace’ patrolling off Dakar where units of the Vichy French navy were located. This included several French cruisers and the battleship Richelieu. ‘Operation Menace’ involved a powerful RN fleet, the objective was to install General de Gaulle and a Free French force at Dakar to prevent the Germans seizing Dakar and the French warships. The belief that Dakar would welcome de Gaulle was optimistic and ill-founded with the French shore batteries opening fire on the British fleet with RN ships being damaged, and the Vichy French governor refusing to negotiate.

On 24 September HMAS Australia was engaged in a general fleet bombardment of the French fleet and batteries at Dakar. During the attack Australia was subject to high level bombing by French twin-engine Glenn Martin aircraft. On 25 September 1940, Australia and HMS Devonshire moved towards Dakar to attack French ships and shore batteries. During this engagement Australia was hit aft twice, and the Walrus aircraft that Clarke was flying to call the fall of shot was attacked by Vichy French Curtiss Hawk 75A aircraft, and was seen to crash into the sea.

In a brief description of the incident HMAS Australia’s Captain Stewart reported, ‘At 0917 a Walrus aircraft was observed to have been shot down astern of HMS Barham. Two of the crew were seen to have bailed out. It is with deep regret that I subsequently confirmed that it was my spotting aircraft.’ What is not said is that the three crew members of the Walrus were Flight Lieutenant George John Isaiah Clarke (P) RAAF; Lieutenant Commander Francis Kevin Fogarty (O) RAN and Petty Officer Colin Kenneth Bunnett (T) RAN.

All were posted missing as a result of enemy action and their bodies were never recovered.  Because of the intensity and accuracy of large calibre gunfire from the Dakar Harbour it was impossible for the ship to get near their position. Yet, the reports from the Walrus whilst spotting for gunfire was a contributing factor in HMAS Australia coming off lightly from the enemy’s gunfire.

Various reports about the French Vichy fighter attacking the Walrus state it was seen to fall out of control into the sea. The conclusion is that Clarke did not escape and was killed in the aircraft, but his two crew members were seen to make parachute descents. Several unofficial reports from private papers say that shortly after the parachutists landed in the water they were killed by a salvo that exploded near them.

In December 2018 the FAAAA received a letter from a relative of George Clarke, which resulted in the photograph above.   The letter also included the following account:

“Following the publication of my advertisement in the Vet Affairs magazine I received a very informative email from Peter Taylor from WA, whose father was a crew member on Australia 11 during the bombardment off the coast of Dakar. He had kept an illegal diary and had written a fully detailed entry of the events of the day George Clarke died. Peter sent me a copy of the page from his father’s diary.

‘George had been catapulted into the air but was only airborne for twenty minutes before he was shot down. The two men who bailed out of the plane, LtCdr W. Fogarty and PO/Tel C Burnett were last seen making very strongly for shore but the water was almost alive with sharks. We know they died but it would be kinder to believe, hopefully, that it was a bombardment that killed them. A destroyer had been sent to pick them up but was ordered back in line as the forts opened fire on them.’

His diary records that the ship Resolution opened fire with AA guns and shot down the French fighter ‘plane which destroyed the L2247 Walrus 11 piloted by George Clarke. His diary vividly recalls how it feels to be under constant attack, the damage to the ships, noise, engagement with the French ship Richelieu.” 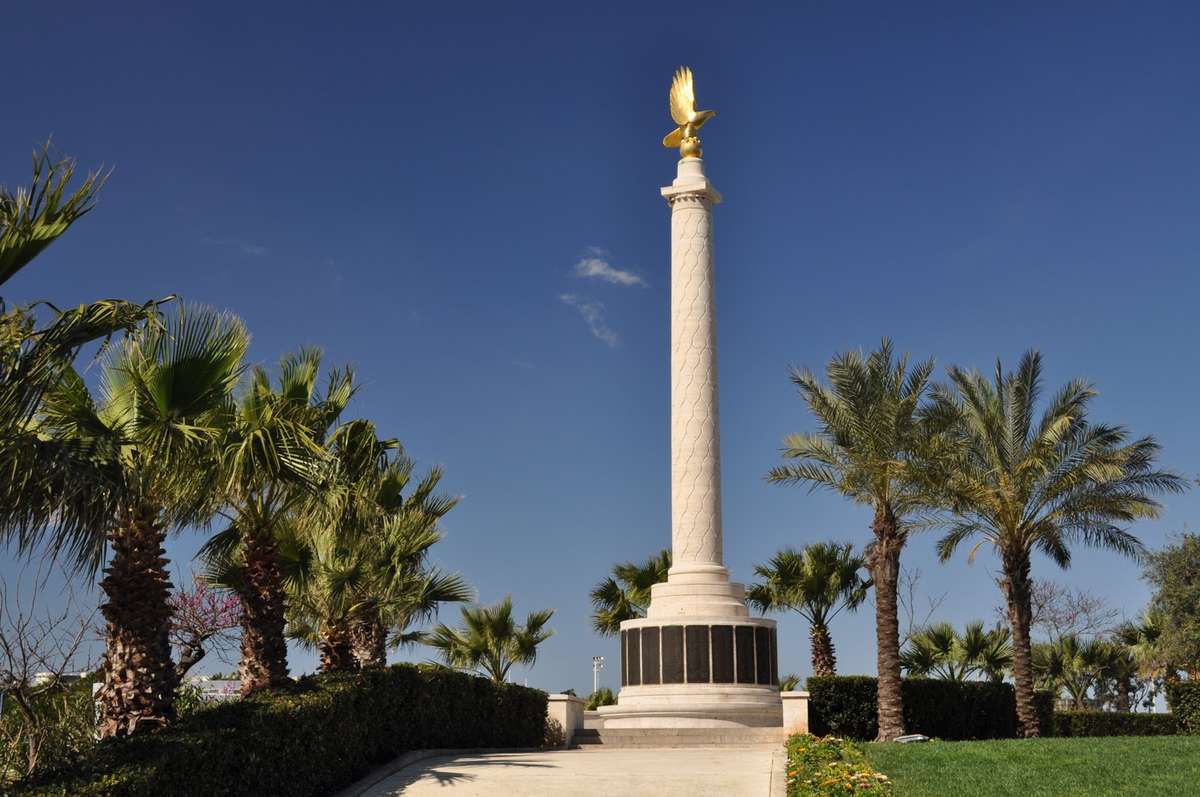 FLTLT George Clarke’s name appears in the Commemorative Area at the Australian War Memorial, Canberra. His name is also engraved on the Malta Memorial (see photo left), for airmen with no known grave. 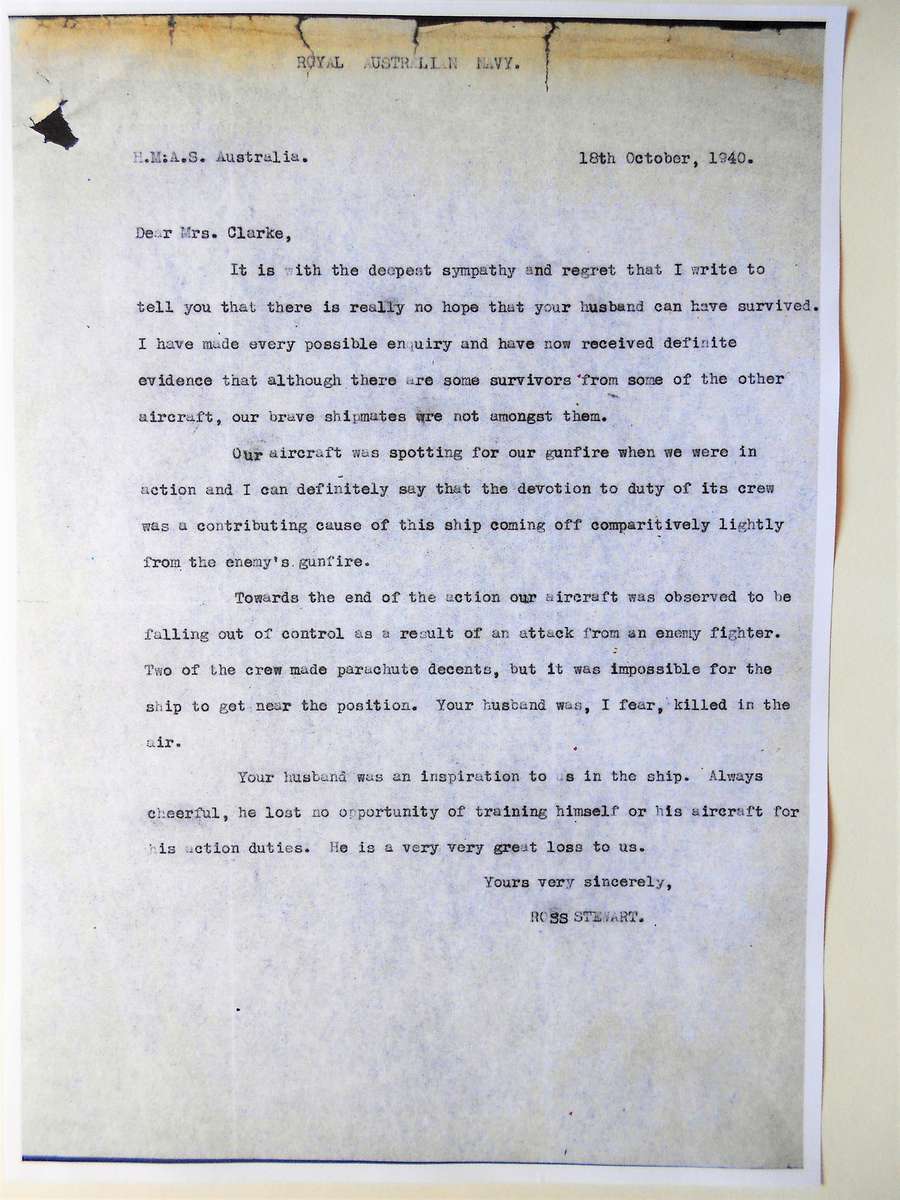 Left.   Letter from Captain Ross Stewart, Commanding Officer of HMAS Australia, to Mrs Clarke advising there was little hope that her husband had survived. 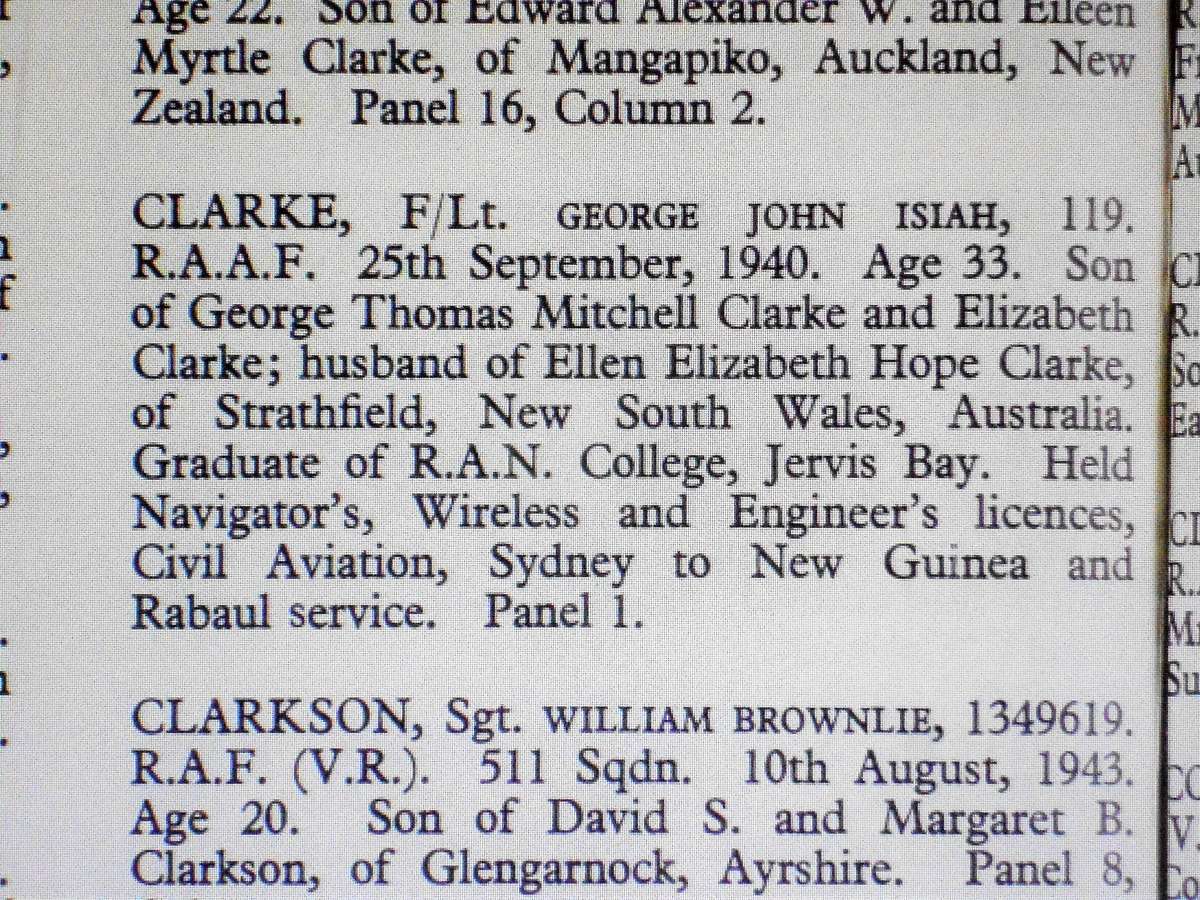 Docment 2. DVA Record indicating that F/Lt George John Isaiah Clarke S/N 118 Served in the RAAF from 2 September 1939 to the date of his death on 25 September 1940. 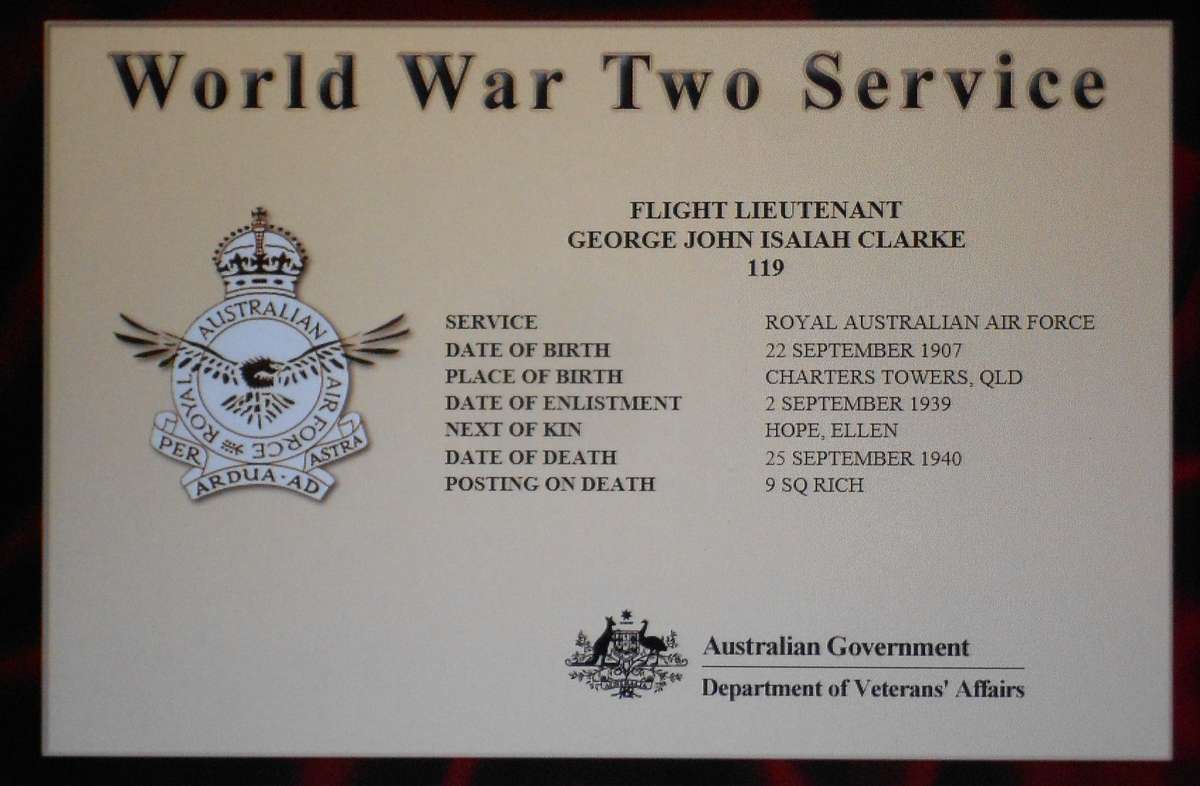 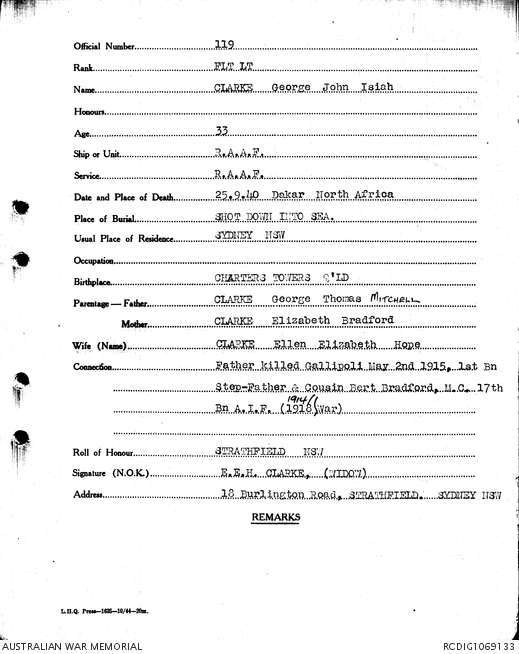 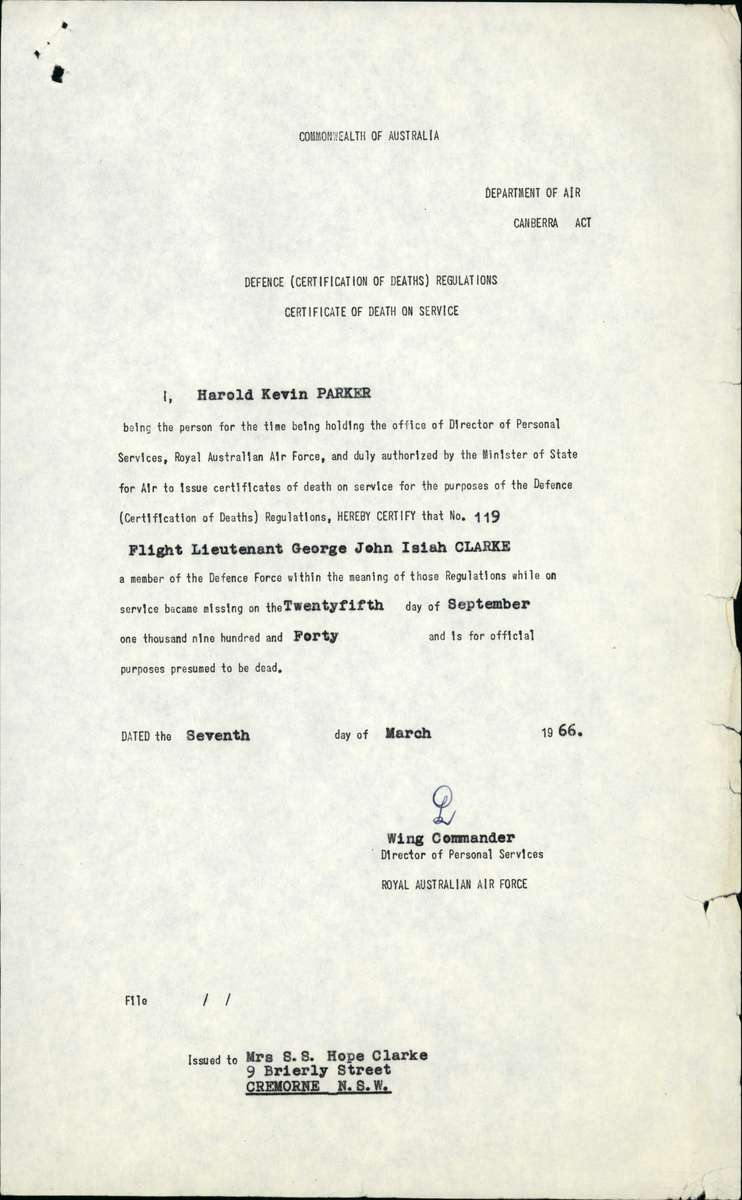 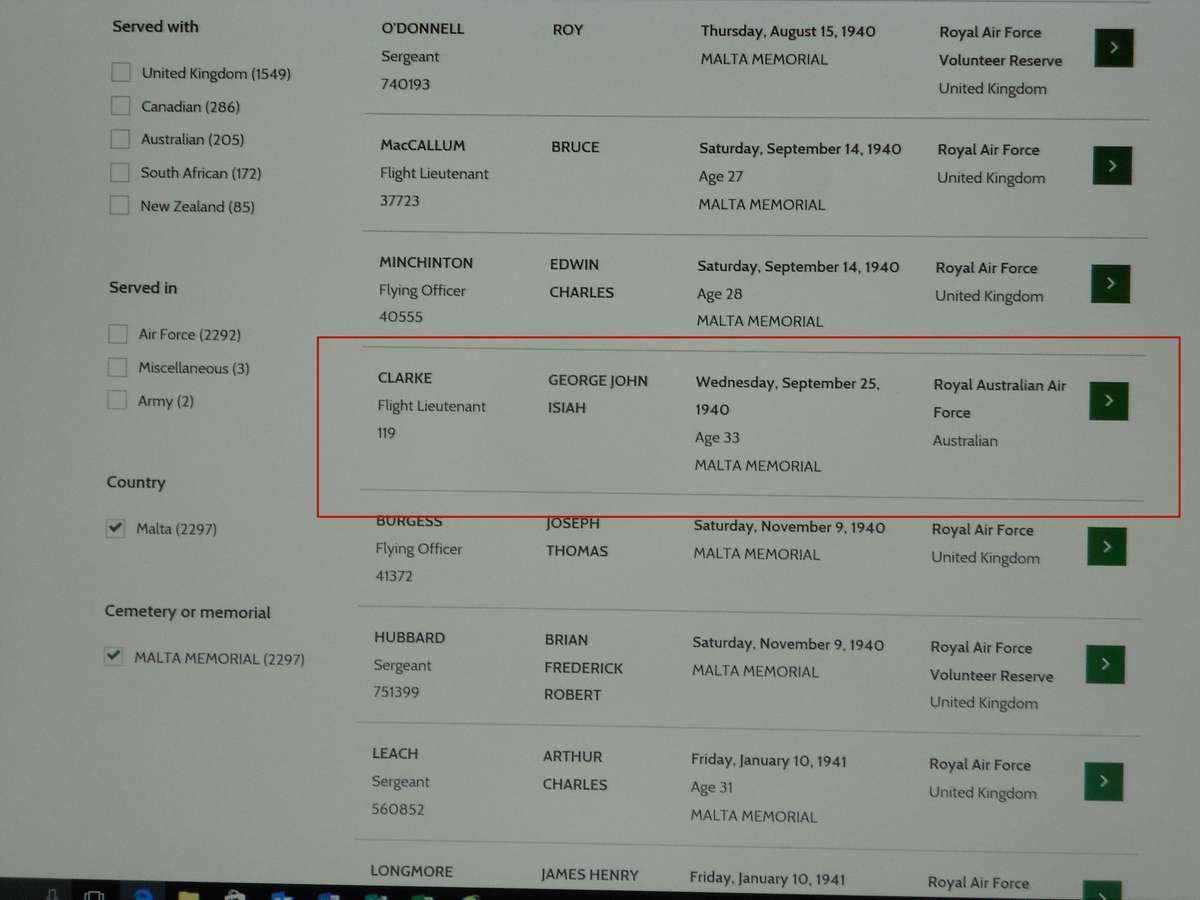 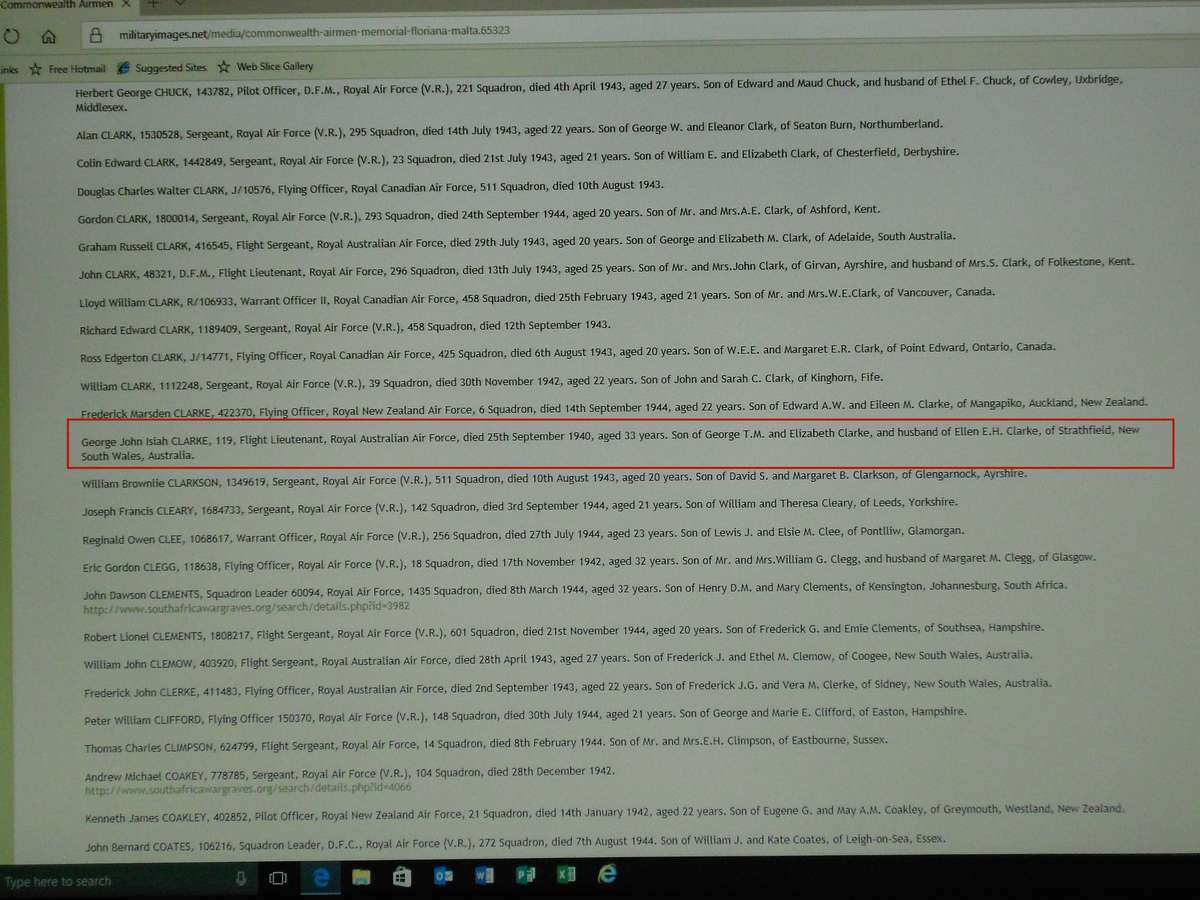 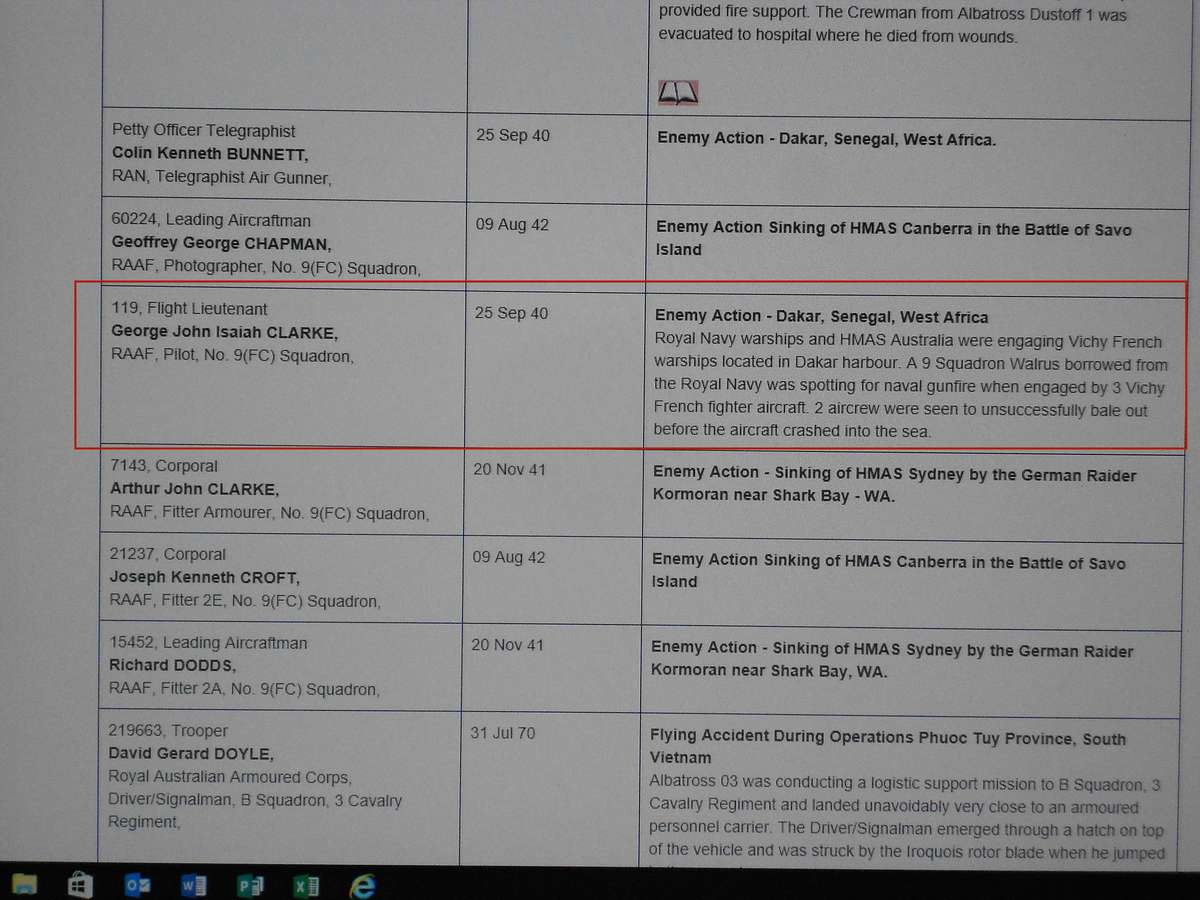 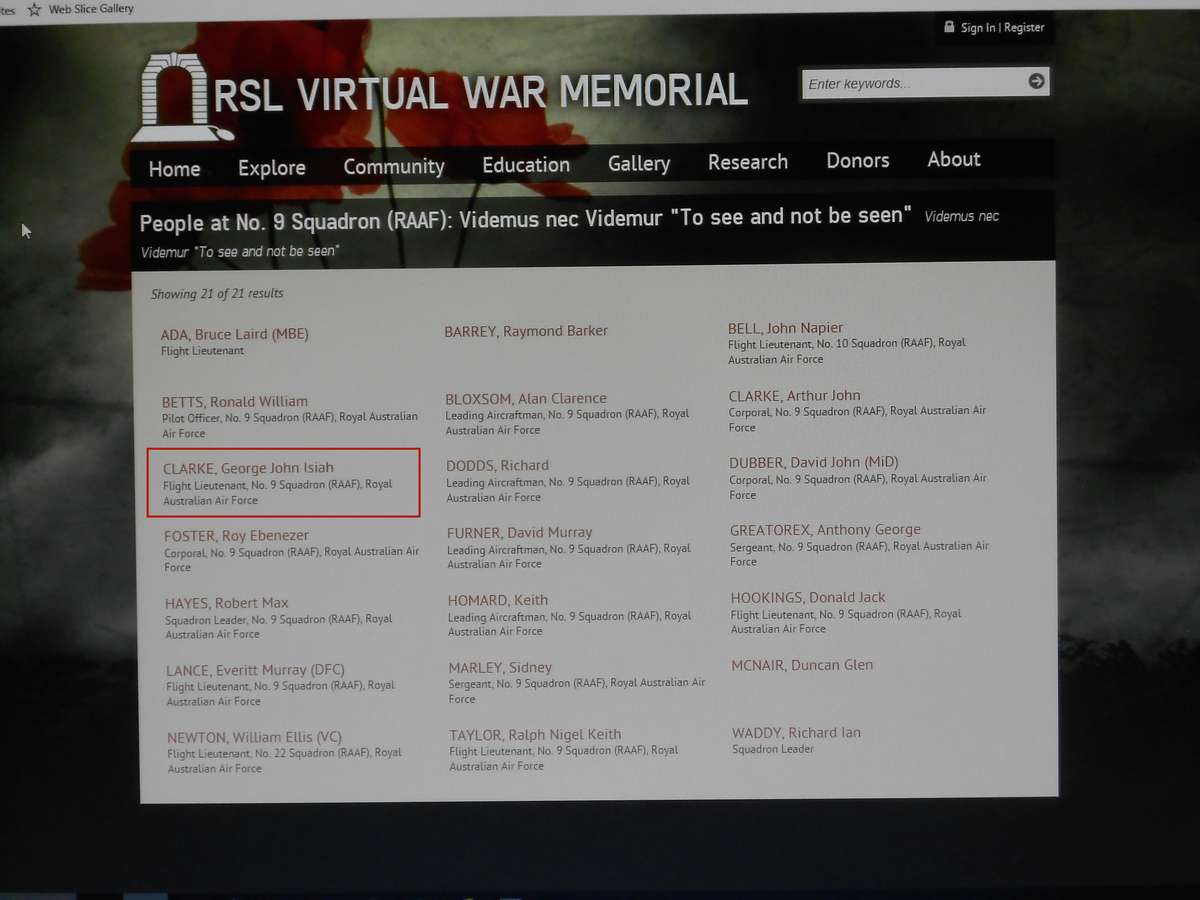 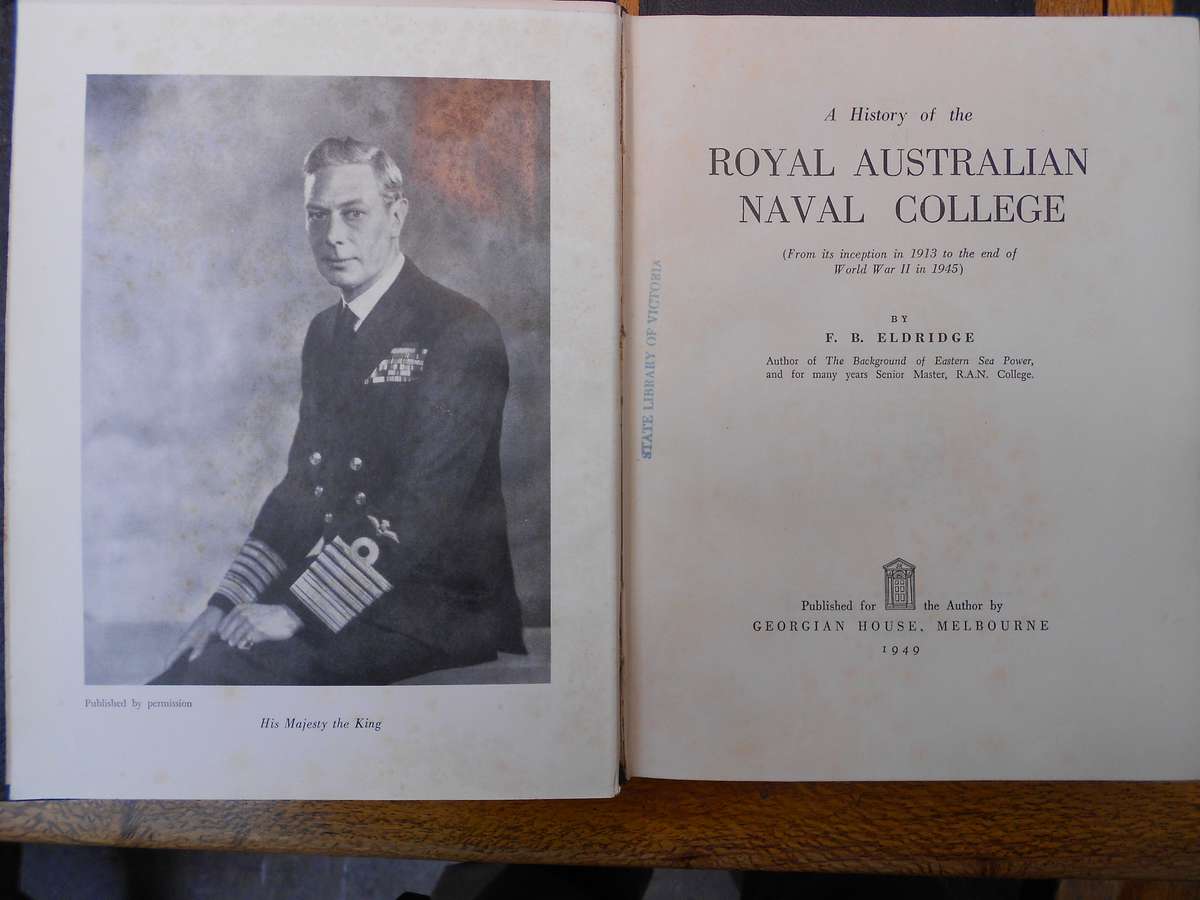 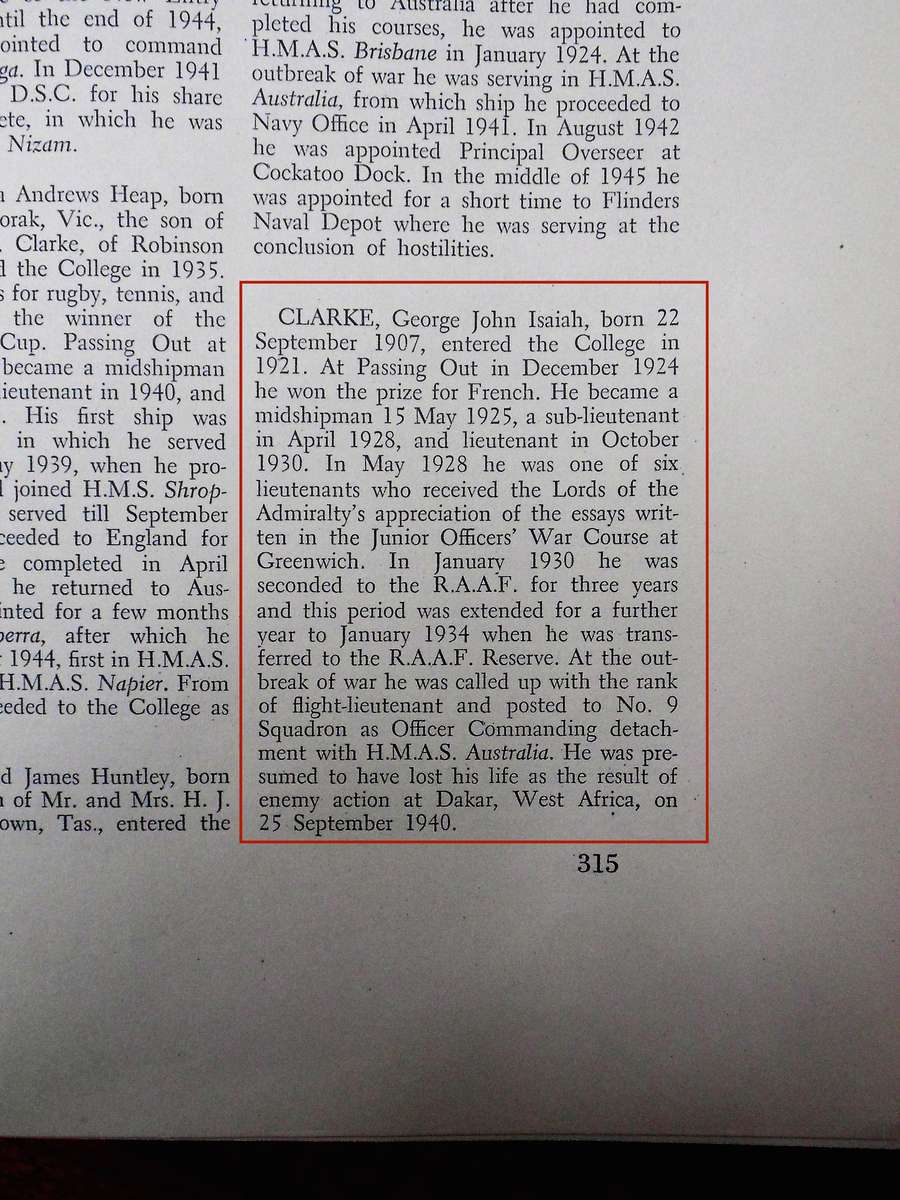 Below:  Document 10. A Record of Service (Officers) for Clarke George John Isaiah, setting out his record of RAN service and noting that he was promoted to Lieutenant RAN on 16 October 1930. 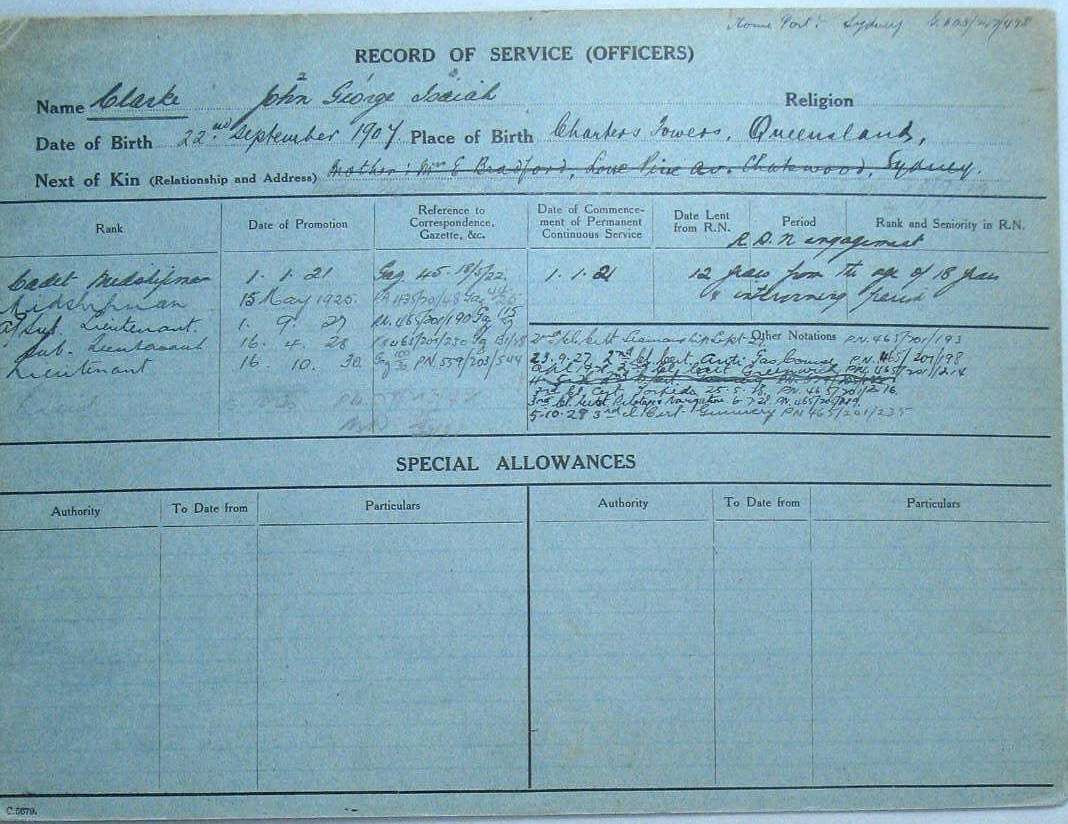 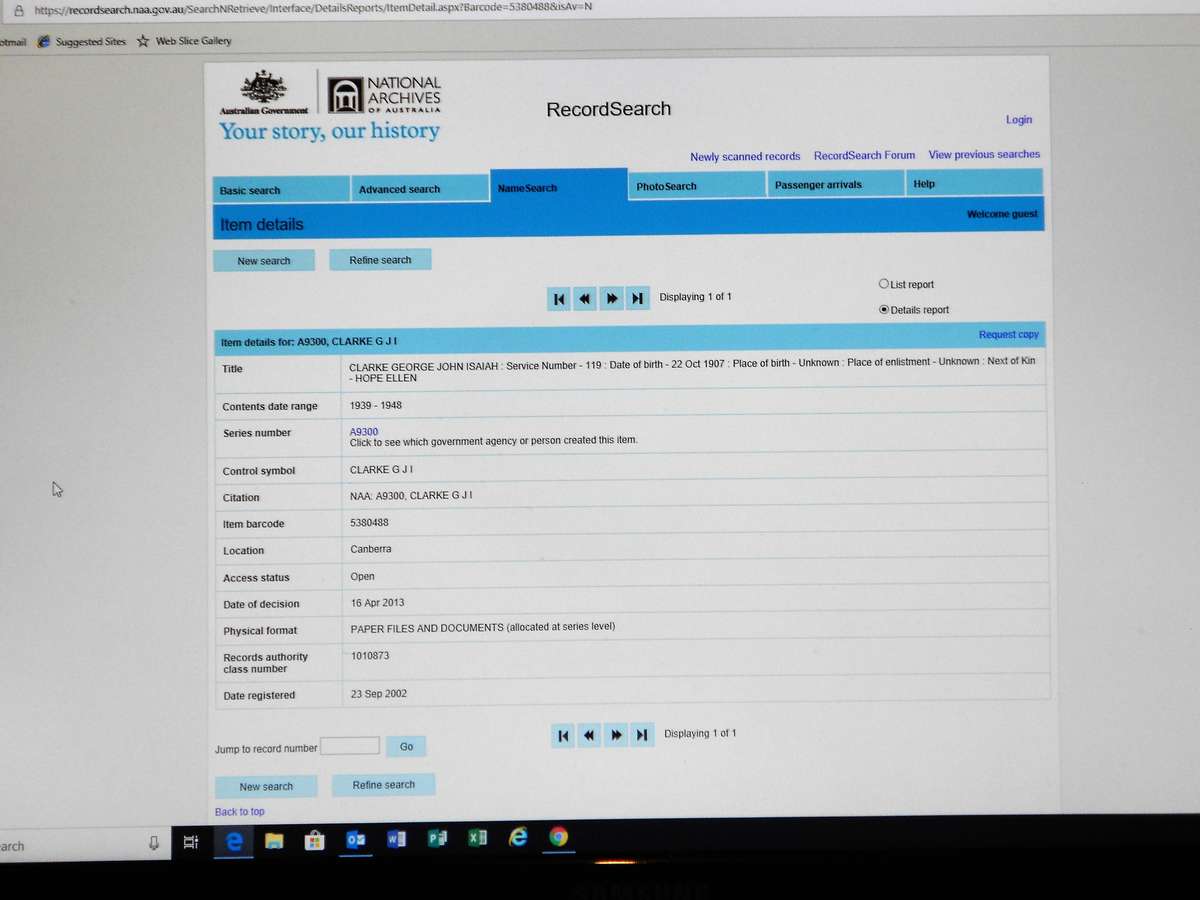 Below. Document 12. A photograph of the Malta Memorial listing Flight Lieutenant G.J.I. Clarke upon one of its panels. 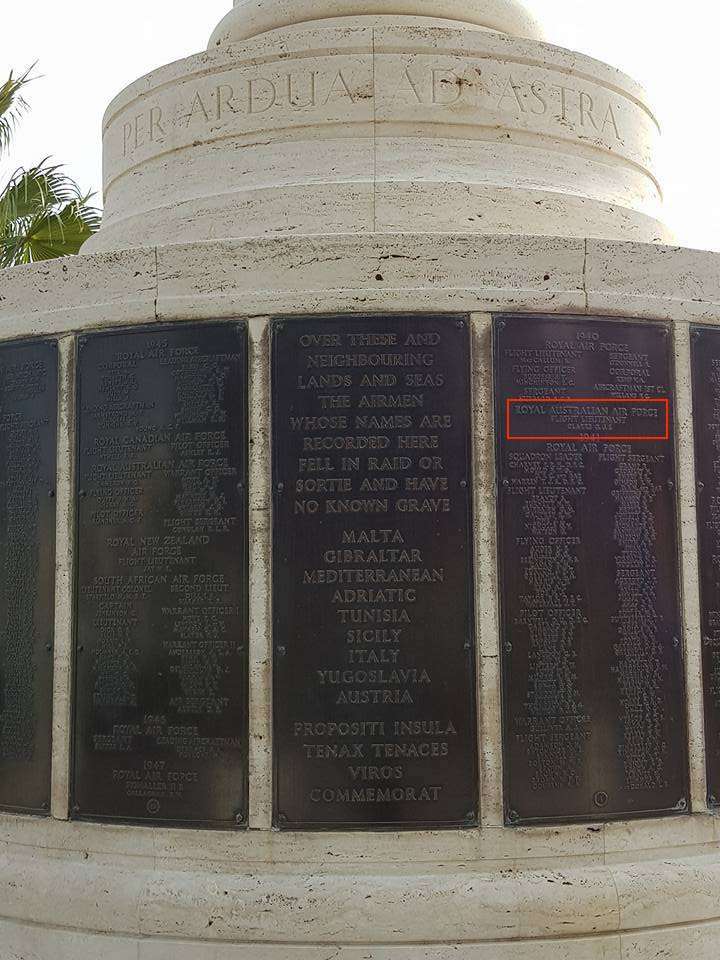 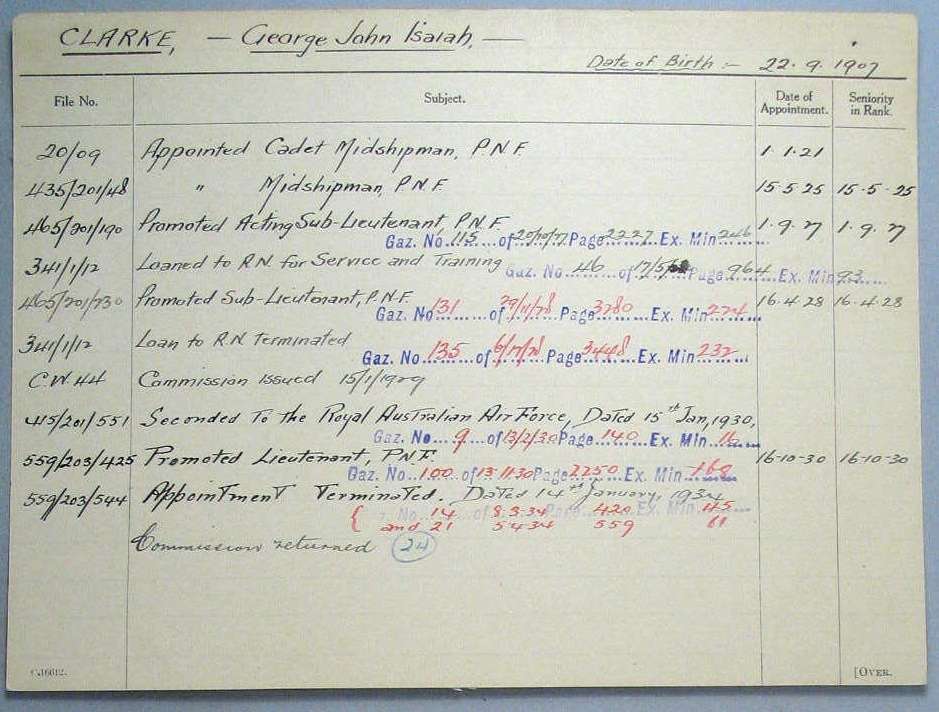 Below.  Document 14.  Record of Service – Officers. 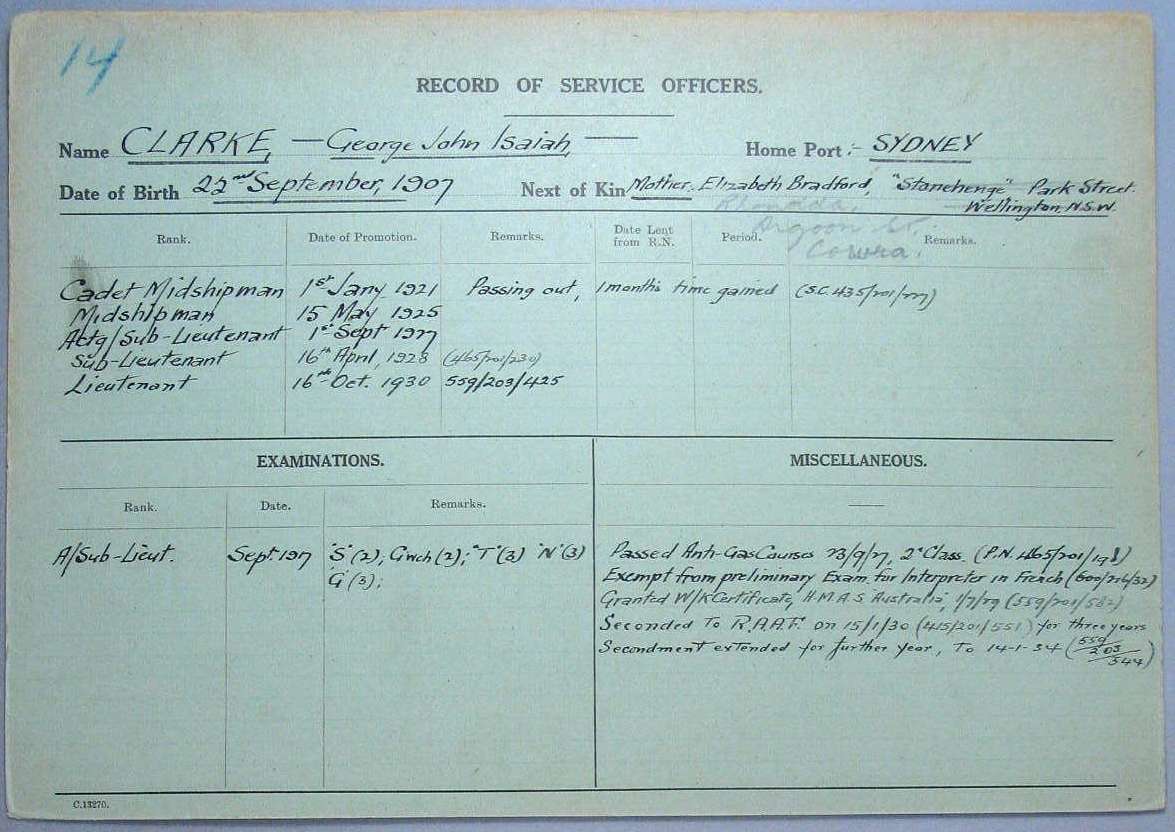 Below. Document 15. Extension to document 14. 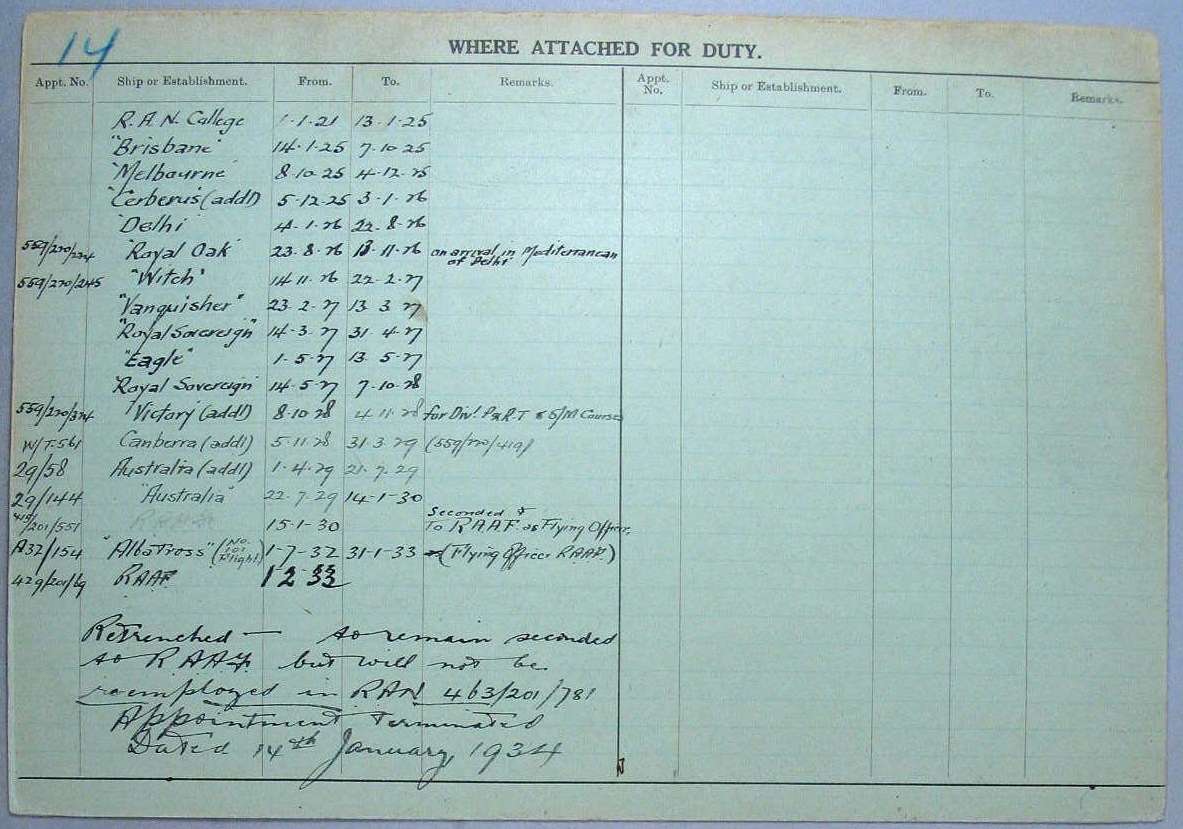