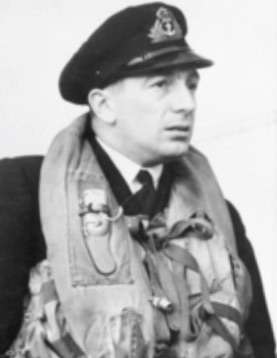 Lieutenant Keith Elwood (“Nails”) Clarkson DFM RAN was killed in action on 5 November 1951 whilst flying a Sea Fury in Korea.  He was the Senior Pilot of 805 Squadron and was a highly experienced ex-RAAF pilot.

Clarkson had served with distinction in the second World War, including in an incident when he was shot down by an ME109 over Tunisia on 2 April 1943 (see his personal diary insert at the foot of this page).  Following the war he joined the fledgling RAN Fleet Air Arm and was commissioned as a Lieutenant before being posted to 805 Squadron, which was part of the Sydney Carrier Air Group sent to Korea in 1951.

Clarkson was conducting a strafing dive on a truck that was probably part of a flak-trap, from which he did not recover.  Aircraft circling the wreckage were twice hit by 20mm anti-aircraft fire.   The 805 Squadron Diary entry for that day was as follows:

’52 Flight were first airborne and once more the Han River was the target. Troop concentrations were rocketed and strafed followed by an Armed Recce heading north from Packichan. it was during this recce that 52 leader was hit while making a strafing run on a possible truck at BT.670155. The aircraft rolled over on its back and dived into the ground, breaking into many pieces. No sign of life or of fluorescent panels were seen. One aircraft returned to the ship and the remaining two carried out Rescap over the area. Few enemy troops were seen and were strafed  and some rockets put into a slit trench. Both aircraft were hit and soon had to land at Kimpo, being short on fuel.

The Diary would like to record the courage and determination of Lieut Keith Clarkson and say how much he was admired and respected by all pilots in the Group.  His loss will be felt very deeply.’ 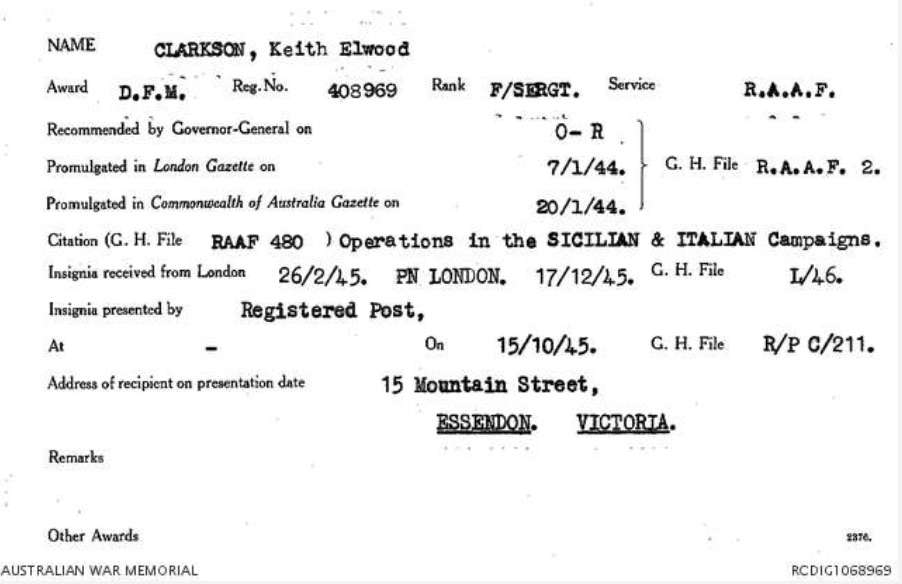 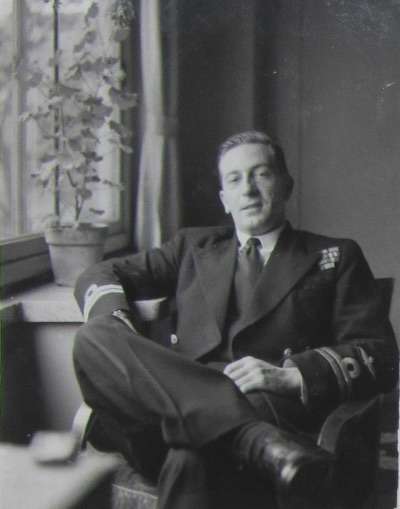 Clarkson’s body was never recovered in Korea, but in a fitting tribute his medals were donated to the Fleet Air Arm Museum on Tuesday 20 November 2018 by Kenny Best, the nephew of Clarkson’s late sister, June Best.  A Spitfire from Temora conducted a flyover in memory of the veteran.  (Images South Coast Register) 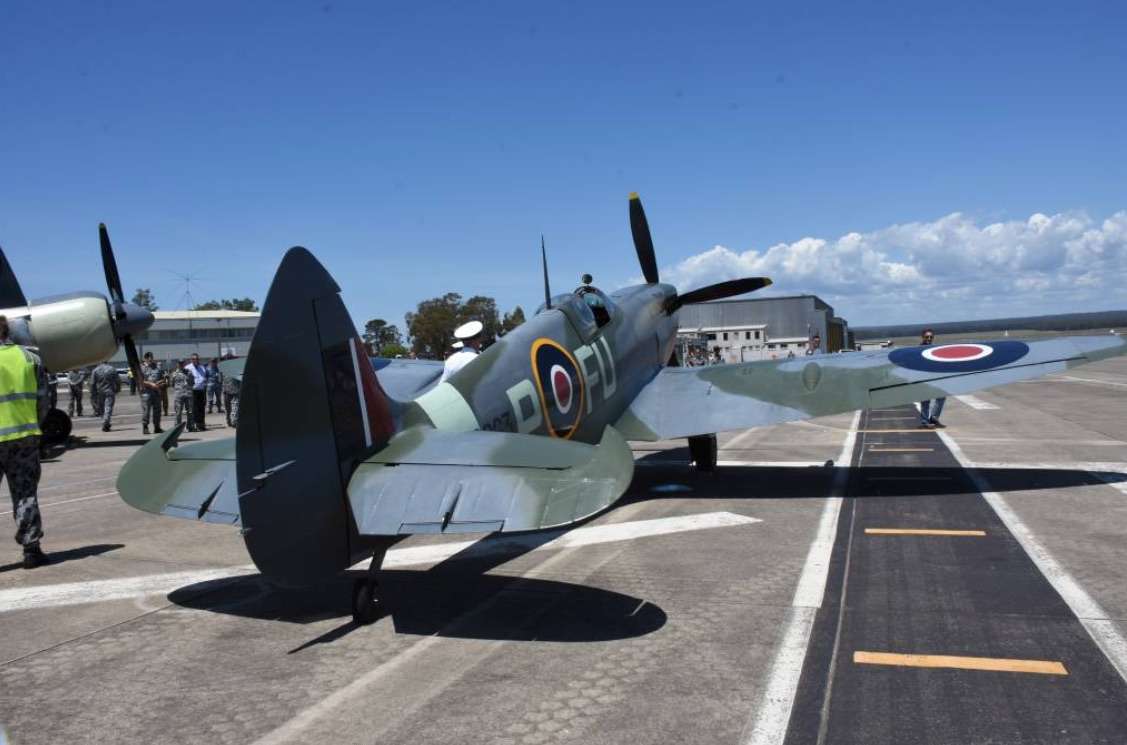 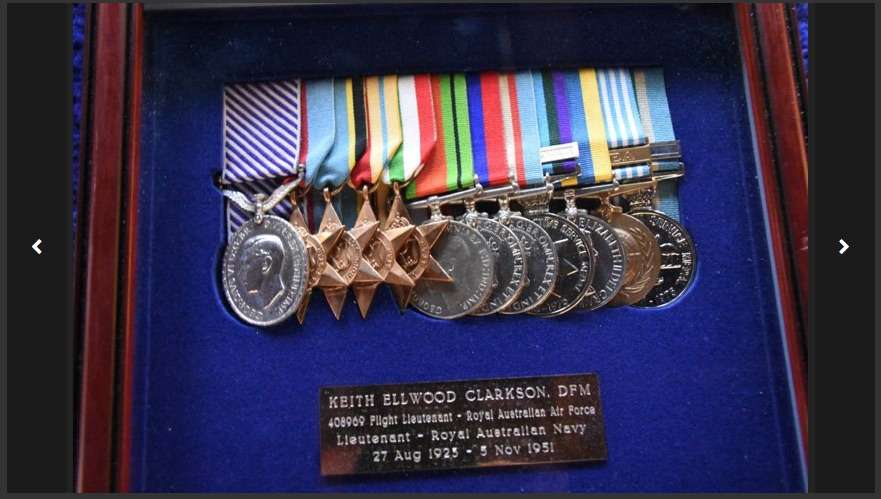 Right: CAPT Darren Rae, CSO to COMFAA, accepts LEUT Clarkson’s medals on behalf of the Navy from Mr Kenny Best, his sister’s nephew.  (Image South Coast Register). You can see the page about this presentation here.

“Up to the second of April we were not very active but then we got some good weather and did a lot of flying. On the third of April we took a bunch of Mitchells over to bomb a ‘drome. We were flying in two lots of six; I was yellow two in the commanding officer’s section Flight Lieutenant Cox being my Number One. On the way back, Cox and I saw two ME109’s below so the two of us peeled off and went after them. The right hand one broke away and started climbing and we followed him up. Cox fired at him, but missed, and then I fired a short burst at about 250 yards with 10-20 deflection. I saw an explosion in front of his tailplane but had to leave off, as Cox went down in a hell of a dive to 10,000 foot. We climbed back to about 13,000 foot and saw two or three 109’s kicking about. We were all by ourselves and the rest of the squadron had lost us and our position was about 15 miles southwest of Medjez-el-Bab (Tunisia). 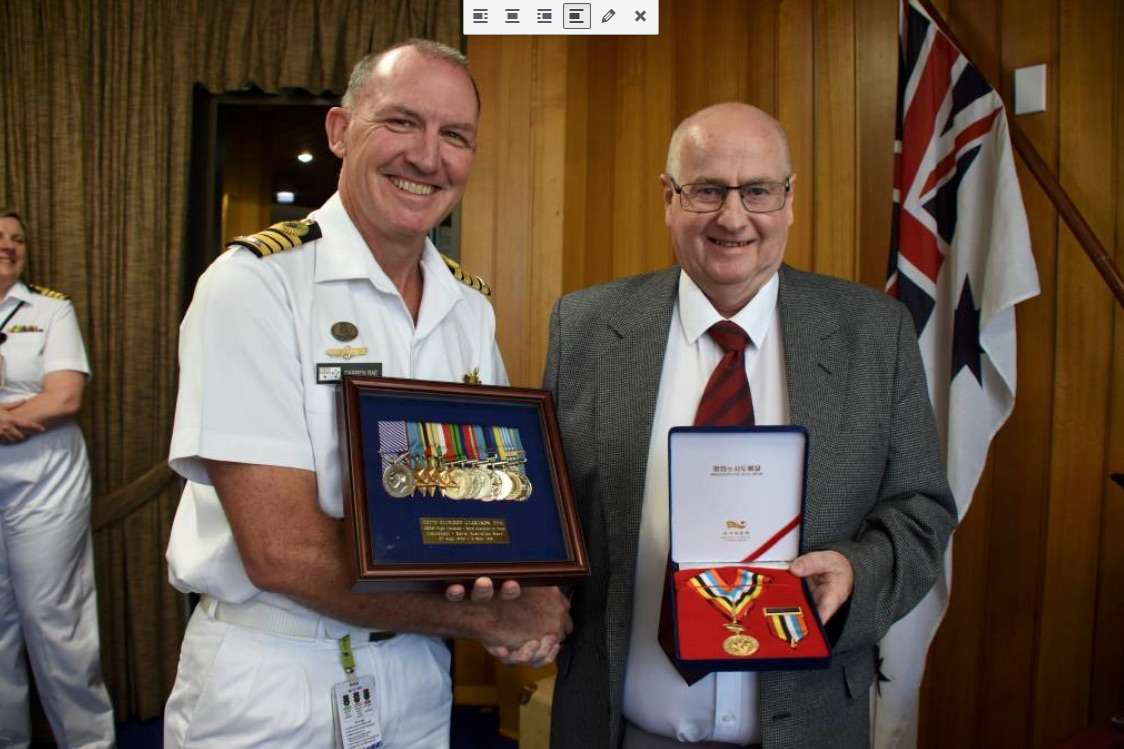 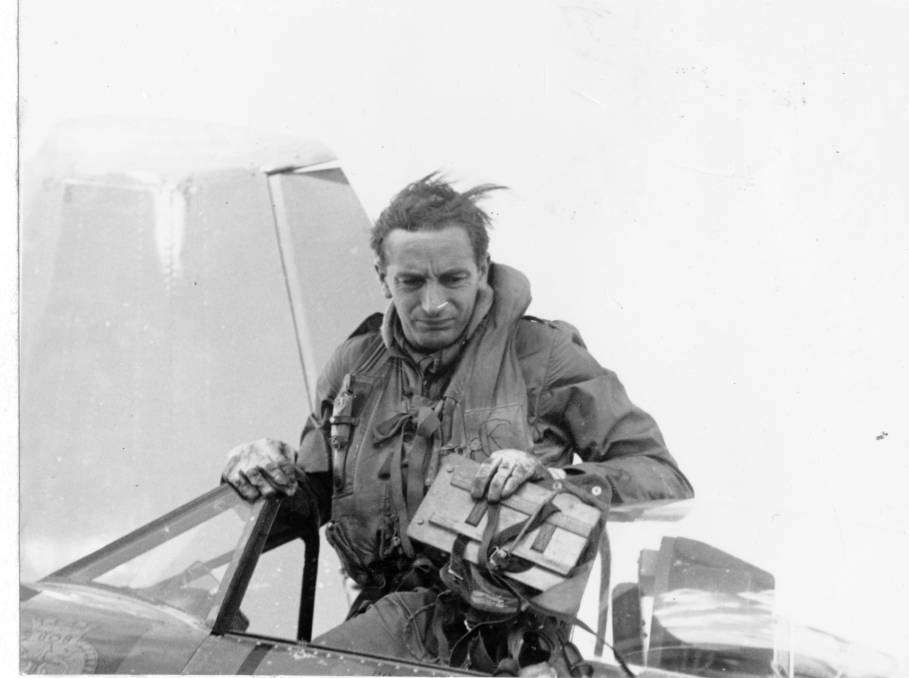