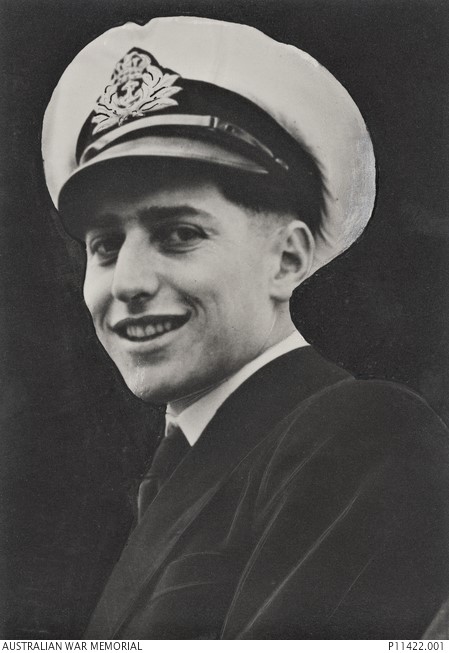 Ronald James Coleman was born at Hampton, Victoria, on 06 April 1929. Prior to joining the Navy he was a cost clerk in civilian life. On 03 May 1948 Coleman enlisted in the RAN at Melbourne as a Recruit Pilot and was posted to HMAS Cerberus south of Melbourne to begin basic training. On 04 August 1948 having passed a selection course to determine his suitability for pilot training, Colman was rated Probationary Pilot.

Having completed his initial training at Cerberus, Coleman was posted to RAAF Point Cook  in August of 1949 for pre-flight training. Point Cook Flying Training School tutored RAN trainee pilots up to “RAAF wings” standard, including flight theory and ab-initio flying in Tiger Moths, and the more powerful Wirraway aircraft. In November Coleman was in a flying accident (no details) and admitted to Heidelberg hospital for five weeks. After resuming his flying training in the New Year, he was awarded his provisional Wings on 10 August 1950.

Recommended for fighter training and promoted to Acting Sub Lieutenant, Coleman returned to HMAS Cerberus on 03 September 1950 for a Short Divisional Course. He was then drafted to the UK for Operational Flying School (OFS) training, taking passage on RMS Orontes. In October Coleman arrived at the Royal Navy Air Station (RNAS) HMS Fulmar in NE Scotland, where he started his (OFS part 1) fighter course. In January 1951 he moved to RNAS HMS Seahawk at Culdrose, Cornwall, for advanced (OFS part 2) training – this time flying the front-line Hawker Sea Fury fighter aircraft. After an intensive course of flying his next posting was to HMS Phoenix at Portsmouth for naval administrative training. 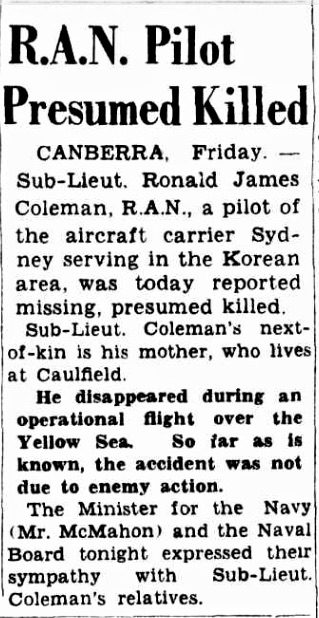 His next posting was to HMS Victory Barracks at Portsmouth for a technical course, then HMS Siskin at Gosport for firefighting and safety equipment training, ending in June 1951. Coleman was now ready to return to Australia and having secured air transport he arrived at HMS Cerberus in July 1951. After taking leave, in August he was posted to HMAS Albatross (RANAS Nowra) where he joined 805 Squadron a front-line fighter squadron equipped with Hawker Sea Fury aircraft.

When Coleman arrival at RANAS Nowra, the aircraft carrier HMAS Sydney (111) was conducting ‘work-up’ exercises in preparation for a UN deployment to Korea; to relieve the carrier HMS Glory due for refit in Australia. Sydney departed for Korea on 31 August 1951 embarked were 805 and 808 Squadron Sea Furies and 817 Squadron Fairey Fireflies.

On 03 September 1951 Colman was promoted to Sub Lieutenant (P). Upon reaching Kure, Japan, and having relieved HMS Glory, from 04 October to the end of January 1952 HMAS Sydney conducted a series of 10 patrols along the North Korean coast attacking communist communications and forces that were invading South Korea. (You can read about this conflict here.

It was during HMAS Sydney’s second last patrol, on 02 January 1952, that Sub Lieutenant Coleman became separated from his leader while flying a Carrier Air Patrol exercise over the Yellow Sea, and was never seen again. An extensive search was conducted in poor visibility and low cloud, but nothing was found except a patch of oil on the surface which may or may not have been from an aircraft hitting the sea. After many fruitless hours the search was called off, and Coleman was declared missing in action, presumed dead.  He was only 22 years old.

The name of Sub Lieutenant Ronald James Coleman RAN is recorded at the AustralianWar Memorial, Canberra, in the Commemorative Area, Panel 1. And at the United Nations Memorial, Busan, South Korea, Wall 1, ID 115260714

Coleman’s brother Leslie Harold Coleman served with 77 Squadron, RAAF, in Korea in 1954, and only passed away recently, aged 90. 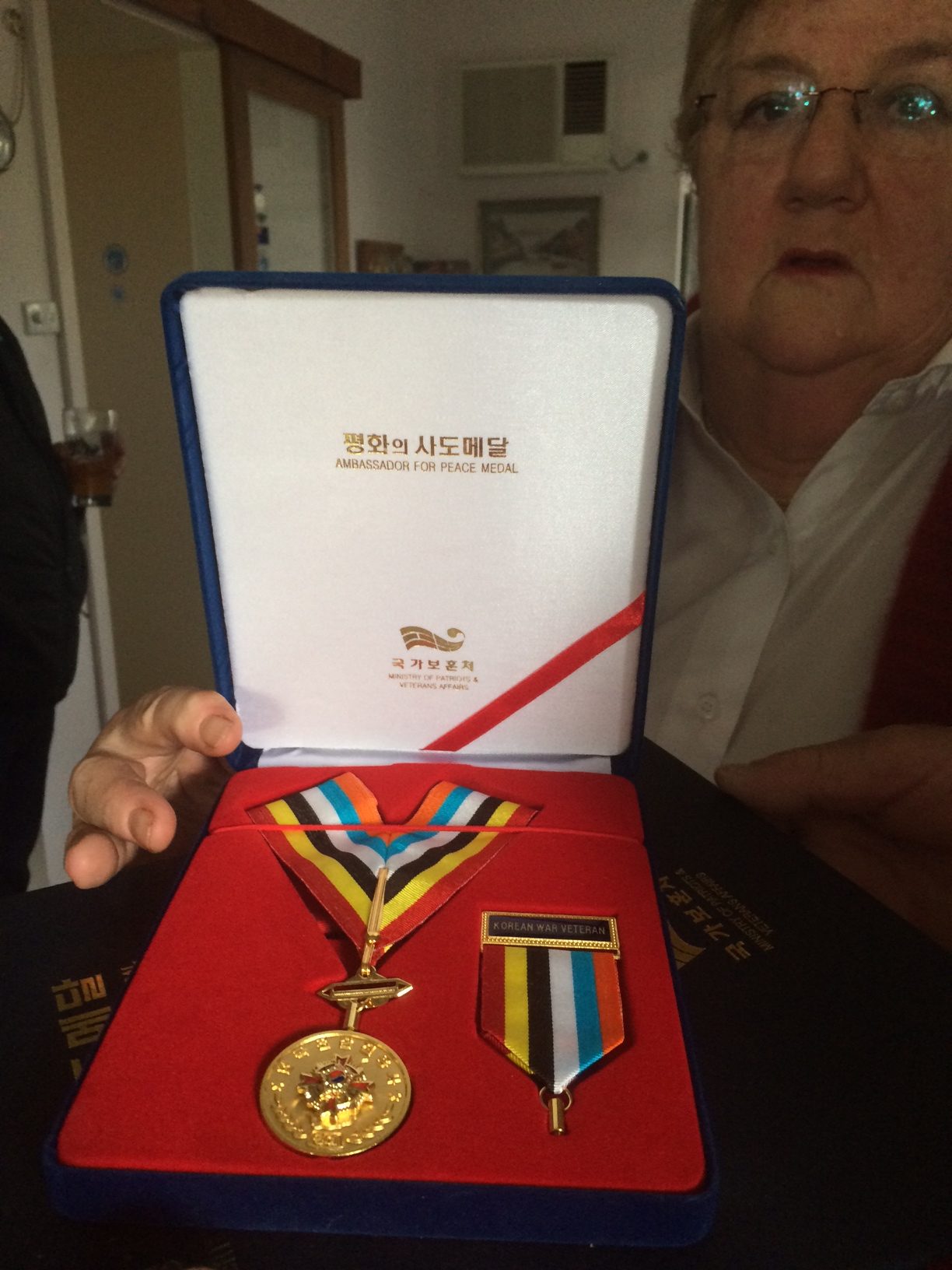 Ron Coleman’s medal of Gratitude from the South Korean people (Government) to those who served and lost their life for the Koran people. This was given to Les, Ron’s late brother, a few years ago by the Consulate General of Korea. (Photo courtesy Jeff Roseman, Ron’s cousin). 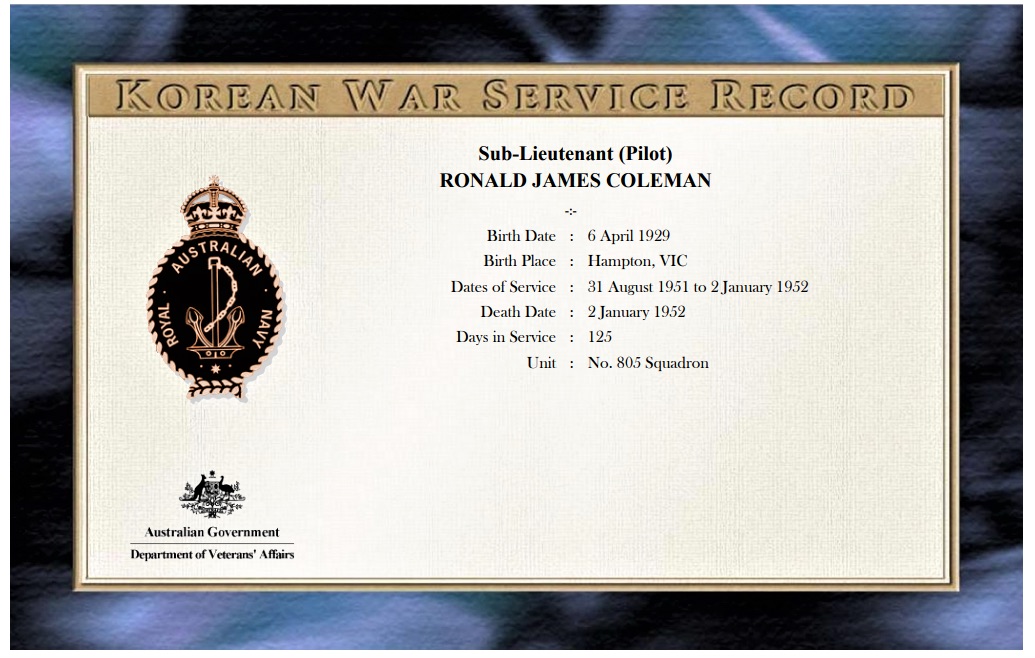