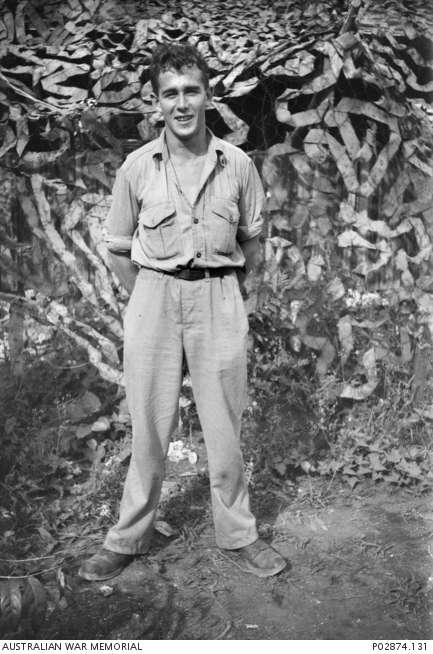 Neville Stanley Faulks was born on 20 July 1923, at Ryde NSW, to Jessie and Thomas Faulks. He was one of a large family living near Wallendbeen, a small country town in the heart of a wheat and sheep producing district, in central New South Wales. Faulks had a sound education and in 1938 achieved his Intermediate Certificate with good passes in nine subjects. As this family lived on a working farm – when he left school he assisted his father in running the property.

When WW2 was declared in September 1939, the Australian government called on able bodied men to register for military service. On 16 September 1941 the 18 year-old Faulks signed-up with the RAAF Reserves at a recruiting centre at Harden, near Wallendbeen. On 6 December 1941 he was called-up and enlisted for aircrew, service number 420930. He received his initial training at RAAF Bradfield Park No2 Training School, Sydney.

On 20 February 1942 Faulks was posted to RAAF Temora, in country NSW, as a Trainee Pilot and began flying DH82 Tiger Moths. That September he moved to RAAF Uranquinty for further flying instruction with the more powerful Wirraway, a general- purpose military aircraft. Having gained a level of experience, Faulks was sent the following year to the RAAF No20 Training School at Mildura Vic., for conversion to other more advanced aircraft, and to graduate as a pilot. He then spent several weeks at Ascot Vale near Melbourne doing high altitude training before returning to Mildura ready for drafting to a front-line squadron.

In April 1943 Faulks was attached to RAAF 79 Squadron at Laverton, which was being equipped with P40 Kittyhawk and Spitfire aircraft. 79 Squadron soon began operations against the Japanese from Goodenough Island near the eastern tip of New Guinea, then at Kiriwina, Los Negros and other islands. Faulks was promoted to Flight Sergeant on 14 July 1943. 79 Squadron conducted defensive patrols, engaged enemy aircraft, and raided Japanese airfields and strongholds.

[The following excerpt is from ADF Serials about Spitfire A58-142] On 10 February 1944, after having oil thrown-up onto the windscreen some eighty miles into an escort mission from base, F/Sgt N. Faulks, piloting A58-142 as Blue Four, on returning to base suffered an in-flight engine fire on approach. He was forced to land some 100 yards short of the end of the strip. Pilot was only slightly injured. On 14 July 1944 Faulks was promoted to Warrant Officer.

In April 1944, after a year flying with 79 Squadron, Faulks arrived back in Australia to take-up a role as a training instructor, arriving at RAAF Mildura on 26 June 1944. His experience of flying Kittyhawk and Spitfire aircraft in front-line service benefitted trainees, and his performance records show he was a highly regarded instructor. On 16 August 1944 he applied for a Commission which was granted and the following month he was promoted to Pilot Officer.

With the war in Europe ending and the arrival of the RN British Pacific Fleet in Australia early in 1945 with its aircraft carriers, the idea of becoming an RN Fleet Air Arm (FAA) pilot appealed to Faulks and he applied to transfer to the RN FAA. He was discharged from the RAAF on 25 July 1945 with the rank of Flying Officer.

On 26 July 1945 Faulks was appointed (probational) Sub Lieutenant (A) RANVR and drafted on loan to the RN FAA Mobile Naval Operating Base (MONAB), HMS Nabthorpe, at Schofields, west of Sydney NSW. The base (MONAB 3) trained ex-RAAF pilots transferring to the RN FAA – learning naval techniques including carrier deck-landings. [Later many of these former RAAF pilots would join the RAN FAA]. Faulks sought an extended service commission in the RN, which was subject to his transfer to the RAN. This was granted and his transfer to the RN is given as 7 March 1946.

In early March 1946 the RN aircraft carrier HMS Implacable was in Sydney Harbour preparing for a refit, scheduled from 15 March to 29 April. On 12 March Implacable was at sea off the NSW coast disembarking aircraft to HMS Nabthorpe at Schofields prior to entering dry dock. Faulks was on Implacable, and according to the book Fleet Air Arm Aircraft Since 1946, by Ray Sturtivant, he was the pilot of an 801 Squadron, Supermarine Seafire F.XV, with a Rolls Royce Griffon VI engine, which stalled on take-off, over the bows into the sea. The 801 Squadron Diary for 12 March states: ‘In the forenoon Sub/Lt Faulks ditched on take-off and was not picked up.’

Because the body of Sub Lieutenant (P) Neville Stanley Faulks, RANVR, was never recovered he was posted ‘missing presumed dead’ on 12 March 1946.

Neville Stanley Faulks name is on Panel 9A in the Commemorative Area at the Australian War Memorial Roll of Honour, Canberra. 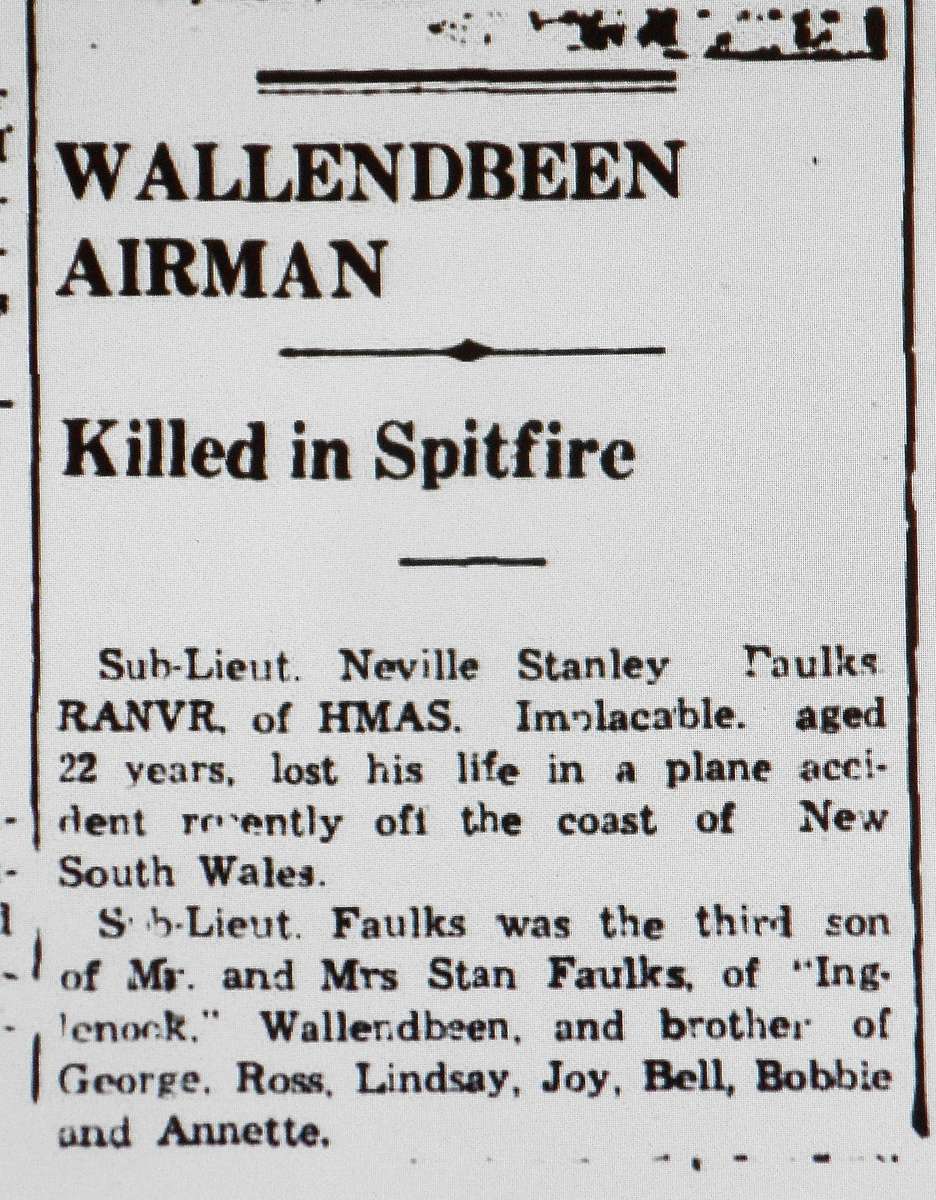 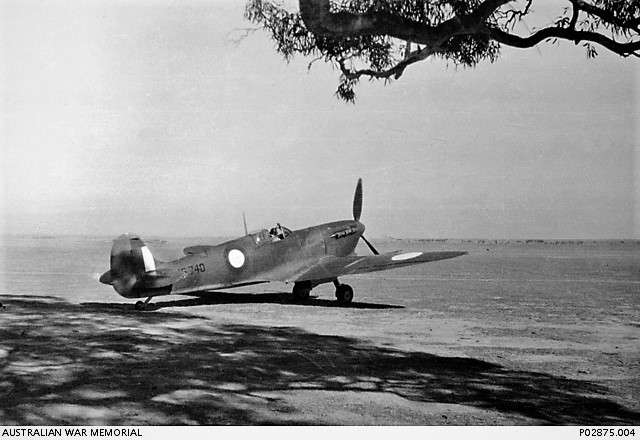 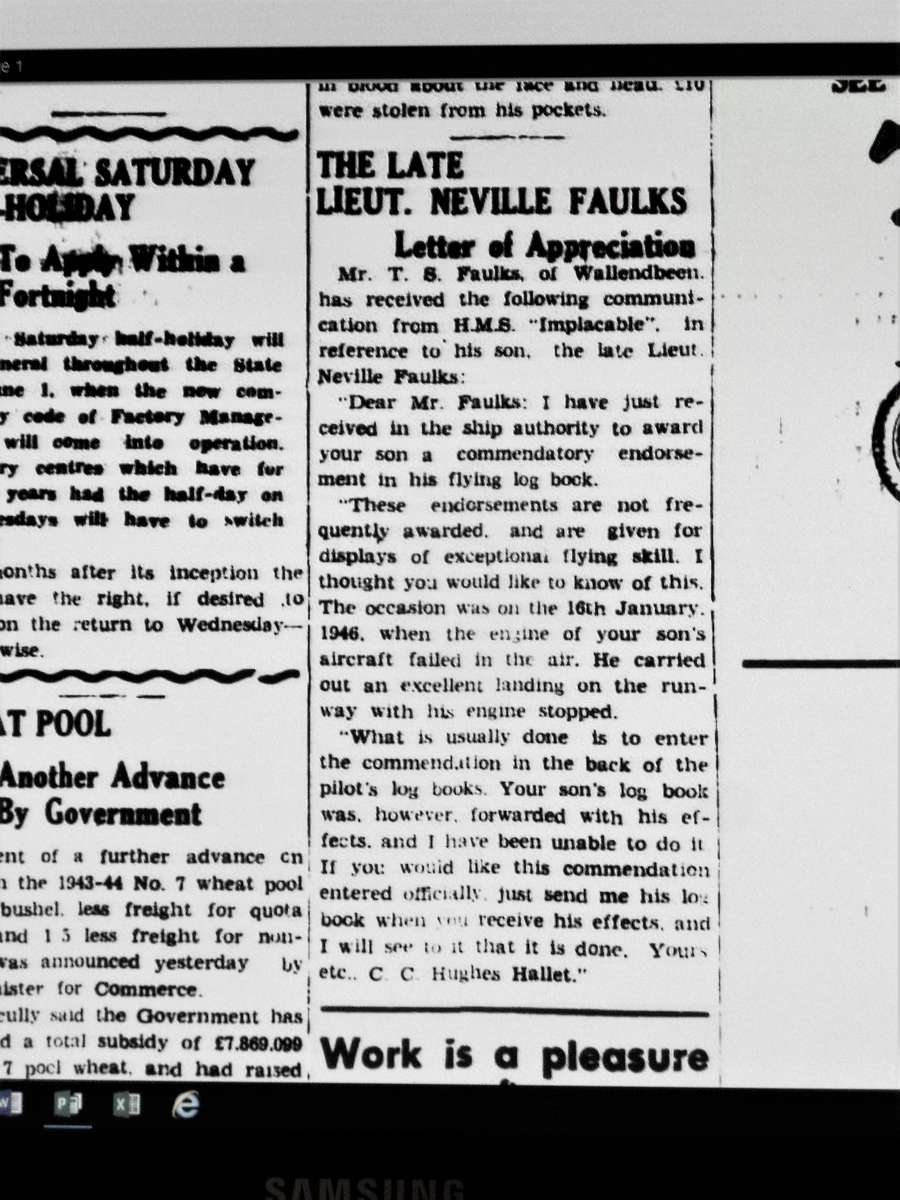 Left above: Clipping from ‘West Wyalong Advocate’ 25 March 1946, page 2. (This says Faulks was killed in a Spitfire, which is assumed to mean Seafire). (Trove)

Left: According to the AWM Faulks is the pilot of this Spitfire at a training airfield in Victoria. (AWM).