Douglas Reeves Hare was born on 14 April 1921, at Sydney NSW. He grew up at Strone Avenue, Wahroonga, and would have been educated at the local high school. He also had an interest in music as he was a brass bandsman. Little is known about his employment before he was enlisted, except as a general clerk at Wahroonga Hospital. His father Rueben Hare is listed as next of kin, living at the Strone Avenue address.

With the bombing of Darwin on 19 February 1942 meant Australia was under attack. Royal Australian Air force (RAAF) squadrons were defending northern Australia and searching the seas for Japanese submarines. Earlier Douglas Hare had answered the mobilisation call and joined the 8th Field Ambulance, then on 24 December 1941 he enrolled in the RAAF Reserve. As a hospital worker he may have been in an exempt occupation and delayed seeking active service.

That changed on 20 June 1942, when Hare enlisted in the RAAF Permanent Forces, at Sydney NSW, as an aircrew volunteer. On 14 August he began pilot training at RAAF Temora No 10 Flying School, flying Tiger Moths. Then to No 5 Training School at Uranquinty, NSW, for further experience. Hare progressed through the ranks and in 1943 was a Flying Officer with 452 Squadron. Upon return to Australia, he became an instructor and was promoted to Flight Lieutenant whilst with No 2 Training Unit. His RAAF record shows he was assessed as well above average. Hare resigned from the RAAF on 23 July 1945 at his own request.

On 26 July 1945 Hare enrolled in the Royal Australian Naval Volunteer Reserve and was appointed Acting Lieutenant (on probation). Approval was then given to transfer to the Royal Navy (RN), subject to returning to the RAN, this meant Hare was on loan to the British Pacific Fleet, RN Fleet Air Arm. His first posting was to HMS Nabthorpe (MONAB 3) RN Air Station, at Schofields, near Sydney NSW. On 8 November 1945 Hare’s transfer to the RN came into effect; unfortunately, his RN records are not available, but he was one of the many RAAF pilots who joined the RN FAA.

On 6 May 1948, at HMS Vulture (RNAS St Merryn) in the UK, Acting Lieutenant Hare’s time with the RN FAA ended. On 21 December 1948 he was drafted to the RAN’s new ‘flat top’ carrier HMAS Sydney, commissioned at Devonport on 16 December 1948. This draft was to allow him to gain watch-keeping experience and proficiency in other naval duties – a vital part of the transition to the RAN, enabling him to be confirmed in his rank. Furthermore, HMAS Sydney was about to commence acceptance trials in UK waters – and would be exercising with her Firefly and Sea Fury Squadrons. On 18 May 1949, Hare was confirmed as Lieutenant (P), while sailing to Australia, arriving at Sydney Harbour on 28 May 1949,

On 12 June 1949, after taking accumulated leave, Lieutenant Hare (P) arrived at HMAS Albatross (RANAS Nowra) where he was attached to 816 Squadron, part of the 20th Carrier Air Group (CAG), as Air Warfare Officer, flying Fairey Fireflies. Hare was posted to HMAS Sydney as part of the CAG, prior to him being transferred to 805 Squadron as Air Warfare Officer flying Sea Fury aircraft. He returned to 816 Squadron in September 1950 for flying duties as Squadron Senior Pilot, a position he held until November 1951. During this time the CAG (816 and 805 Squadrons) operated variously at RANAS Nowra or at sea were embarked on HMAS Sydney.

On 15 November 1951, Hare was drafter to the heavy cruiser HMAS Australia, again to be further acquainted with General Service naval duties, apart from his Fleet Air Arm role. It was during this time on HMAS Australia that Hare was married to his fiancé, Margaret, on 17 January 1952. On 22 February he was promoted to Lieutenant Commander, and was drafted back to HMAS Albatross on 6 April 1952 for Sea Fury flying duties with 805 Squadron as Commanding Officer. 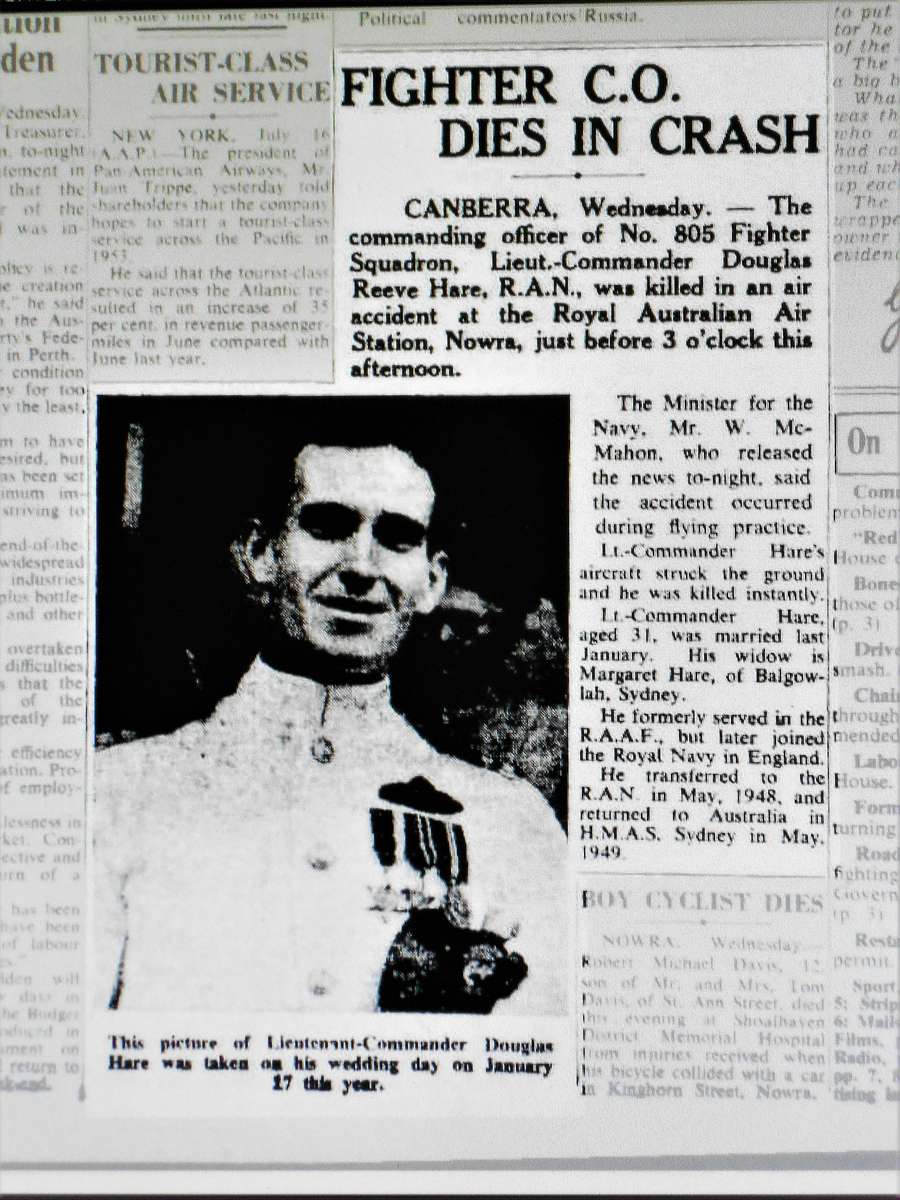 The RAN Sea Fury was a powerful, high performance fighter, one of the fastest piston engine aircraft produced – and they were in popular demand for demonstrations at air shows everywhere. The formation aerobatics performed by the Sea Furies at the air shows required constant practice, superb team work and precision timing. To watch a Sea Fury performance was a thrill for young and old.

It was during one of these aerobatic practice sessions at RANAS Nowra, while rehearsing a formation roll with three other Sea Furies, at about 3 pm, on 16 July 1952, that Lieutenant Commander Hare (P) RAN was killed when the wing tip of his Sea Fury struck the runway at high speed. The resulting impact with the ground shattered the aircraft, killing Hare instantly.

During the 10-years Douglas Reeves Hare served with the RAAF, RN and RAN, he was known as a conscientious and gifted aviator, respected and well liked by officers and men. He was awarded the 1939-42 Star, The Africa Star, the Pacific Star, and Return from Active Service badge.

Top.  Douglas Hare at the age of 21, on enlisting in the RAAF.

Right: A group of former RAAF fighter pilots who joined the RAN aboard HMAS Sydney. Hare is second from the left (AWM). 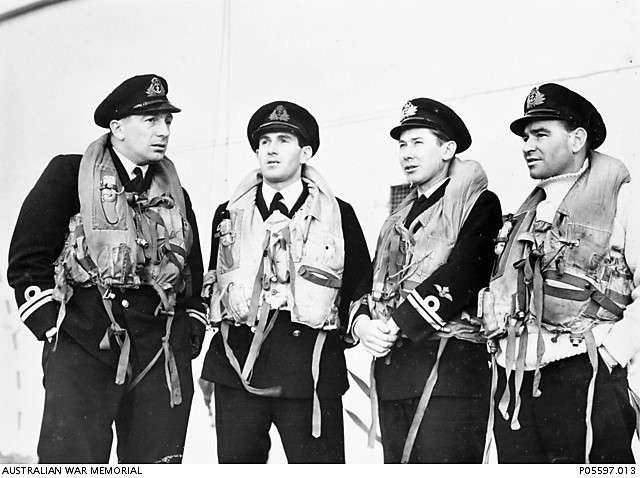 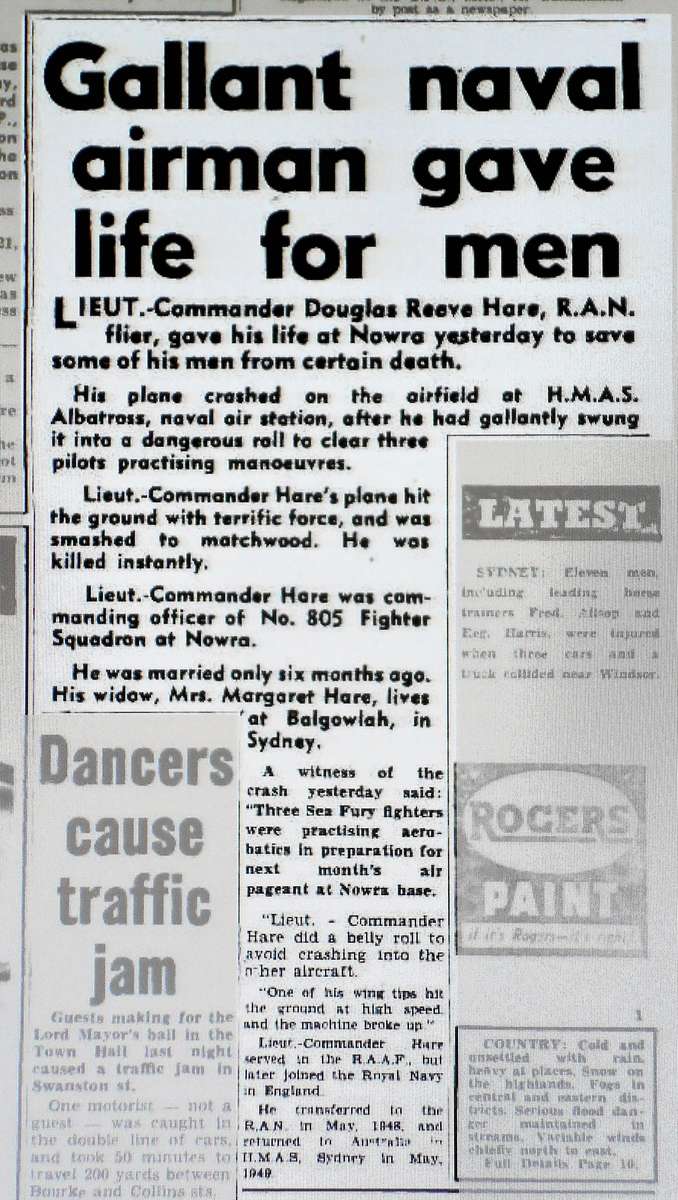 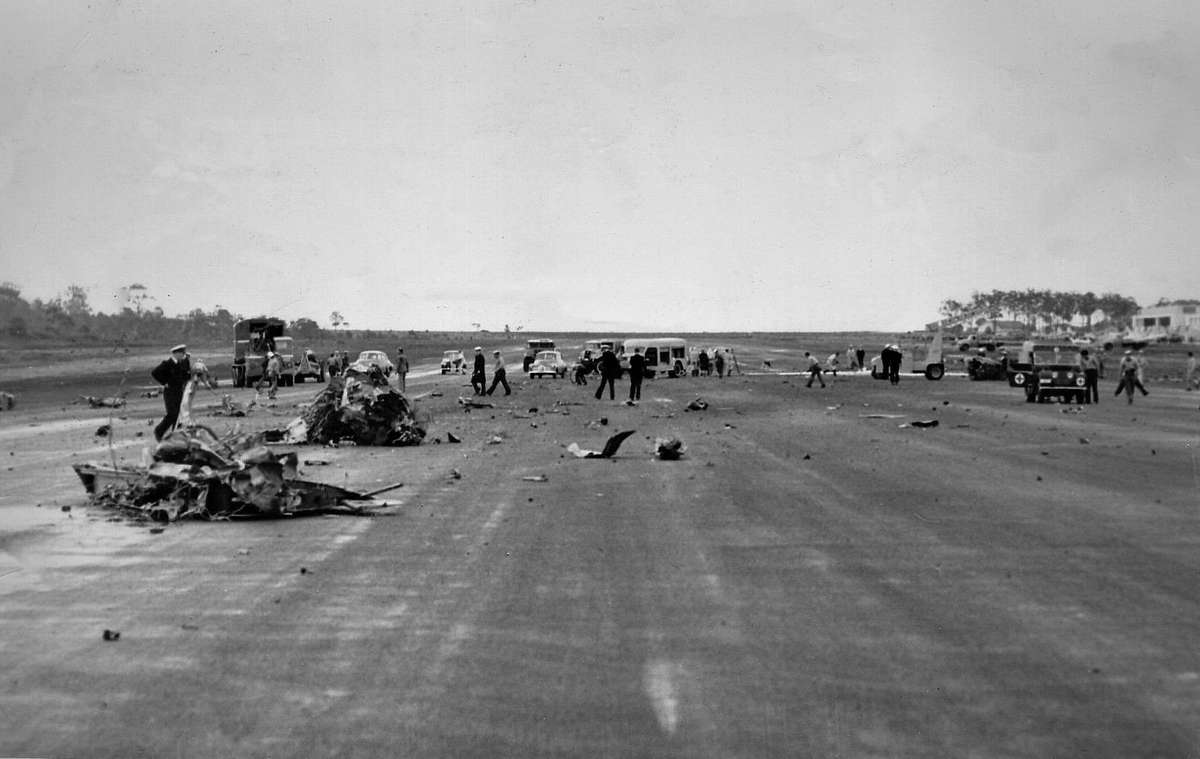