John James Hoath was granted a commission in the Royal Air Force Reserve (RAFR) on 24 November 1937 as an Acting Pilot Officer on probation, class A, and on 23 September 1938 he was confirmed as a Pilot Officer. Hoath relinquished his RAF commission on 16 January 1939 when he transferred to the Air Branch of the Royal Navy as a Sub Lieutenant. On 16 September 1940 he was appointed Lieutenant Hoath (P) RN.

At the time of writing details of Hoath’s RN career are not available, but it appears he was attached to the Fleet Air Arm’s 700 Squadron. The squadron was formed at RNAS Hatston on 21 January 1940, to act as a pool for amphibians and floatplanes embarked on RN cruisers and battle ships. Because of their special handling requirements, Hoath would have trained to fly these aircraft when catapulted from a warship – including the Supermarine Seagull V/Walrus.

In September 1940, Vichy French fighters attacked HMAS Australia’s Walrus, at Dakar West Africa, sending it crashing into the sea with all crew killed. This led to Lt Hoath’s posting to Australia on 11 November 1940 (Australia was at Liverpool in the UK) on a ‘temporary basis’ pending the arrival of a replacement pilot from the RAAF’s 9 Squadron – the Fleet Cooperation Unit, which provided the pilots and aircraft for the RAN cruisers.

On 6 April 1941, HMAS Australia and Hobart, having crossed the Tasman Sea, were approaching Wellington NZ, ready to escort Troop Convoy US10 from New Zealand to Ceylon (Sri Lanka). At 1336; position 40 degrees 40.6’ S, 174 degrees 09.1’ E, Lt Hoath’s Supermarine Seagull V, A2-24 (Walrus), was catapulted from HMAS Australia. But the aircraft failed to rise and crashed into the sea. HMAS Hobart ‘s Seagull V was flying nearby and alighted on the water rescuing the badly injured Observer (Pilot Officer R. Clark) and Telegraphist/Gunner (Leading Airman G.A. Stephenson) from the sinking aircraft. Both survived the crash. Despite a lengthy search Lt Hoath’s body was not found – declared missing presumed dead.

Below left: The RAAF preliminary report into the crash of Seagull V A2-24.  This was the only known case of catapult failure of this type.  Below right (1)  Hoath’s aircraft,  A2-24, on an earlier launch (RAN image). (2) J.J. Hoath’s Lee on Solent Memorial engraving (Image by Frank Grant). 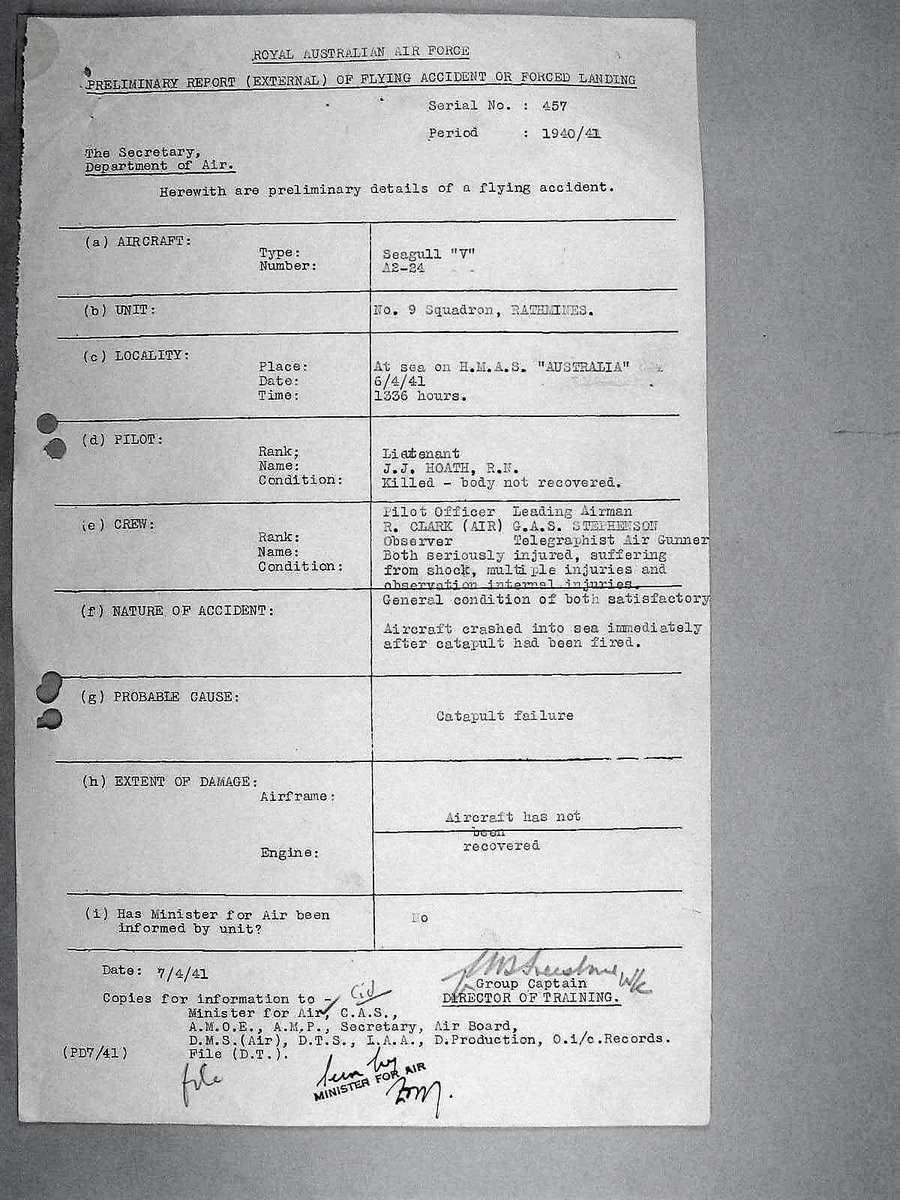 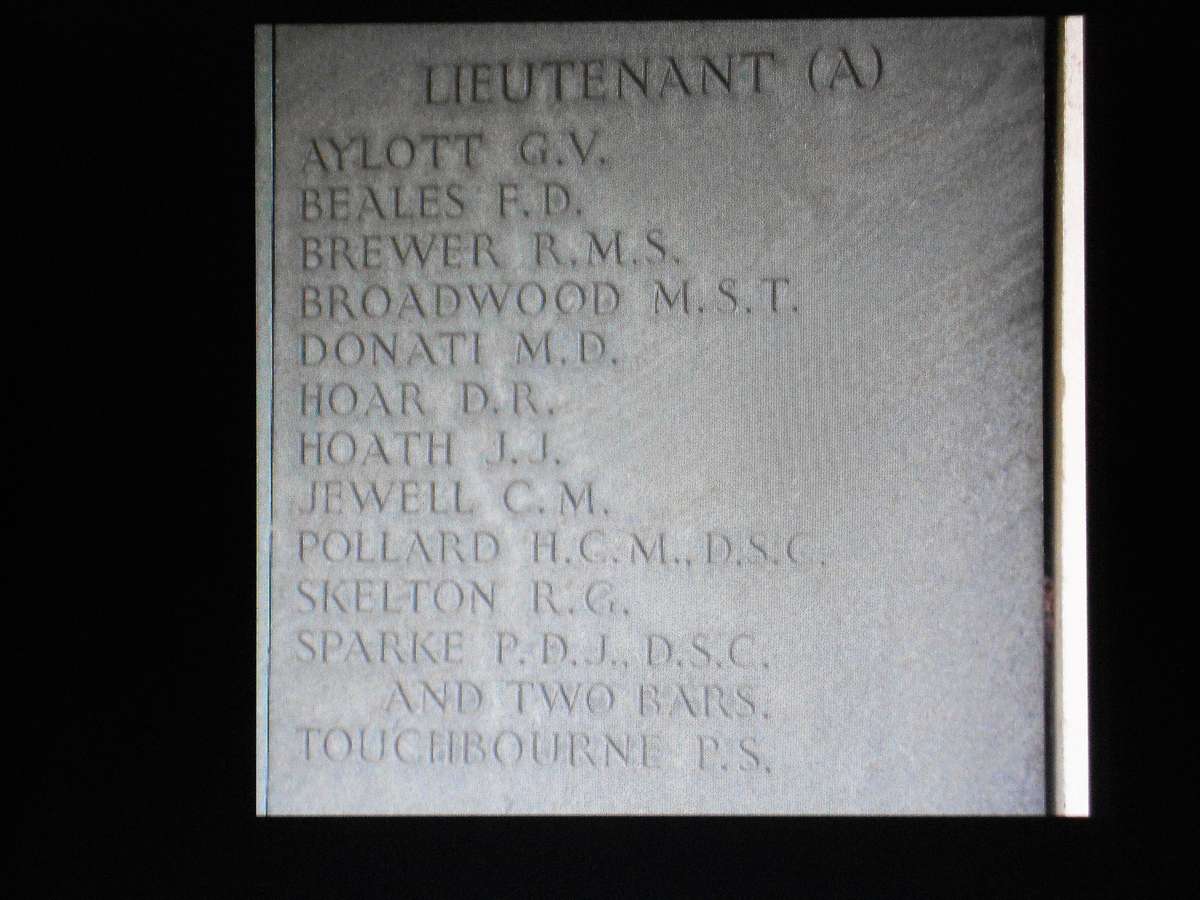 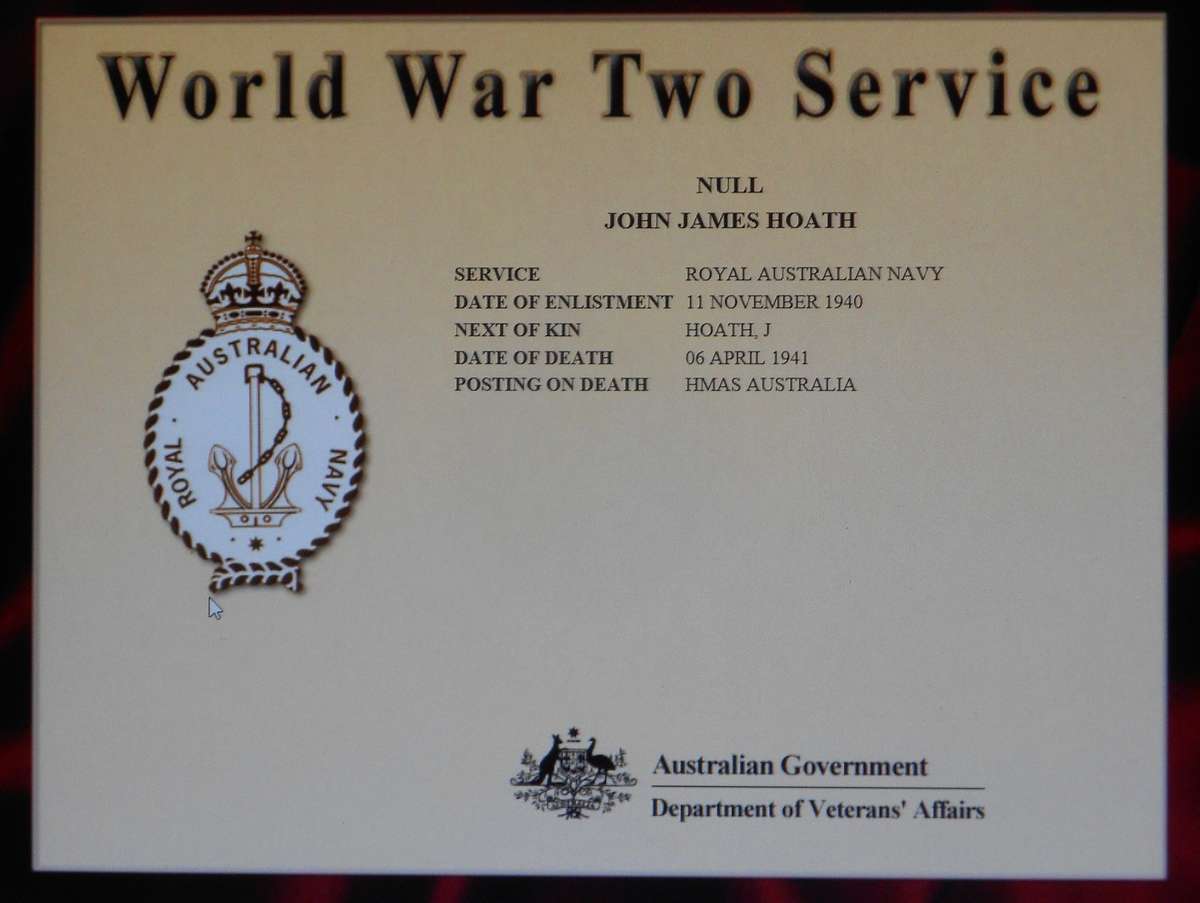