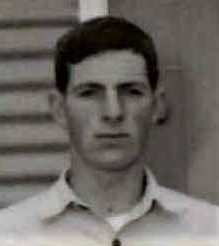 John Morgan Hutchison was born on 17 February 1945 at Brighton Vic. He enlisted in the Royal Australian Navy (RAN) at Melbourne and was posted to HMAS Cerberus (Flinders Naval Depot) at Crib Point (south of Melbourne) in October 1962. There, as a Probational Midshipman (Aircrew), he commenced basic training and was assessed for suitability as aircrew.

Having successfully completed his basic training Hutchison started the aircrew selection process where he was graded for training and nominated for the next pilots flying course. On 06 January 1963 he was posted to RAAF Point Cook, near Melbourne, where he was enrolled in the No 1 Basic Flying Training School.

RAAF Point Cook basic training covered practical subjects including flight theory and aerodynamics, navigation and operational procedures. Flying instruction was in dual-control Winjeel piston-engine trainers under the guidance of tutors until a standard was reached that permitted solo flying. Once trainee pilots began flying solo they worked through a series of exercises that concentrated on navigation and control of the aircraft while conducting various manoeuvres. Having successfully completed the course they moved to the next phase of their training.

On 11 November 1963, at RAAF Pearce W.A., Hutchison joined No. 49 Advanced Flying Training School (AFTS). Pearce air base, 47 km north of Perth, has a long airstrip suitable for jet aircraft which was ideal for the DH Vampire turbojet trainer aircraft that trainees were converting to. The Vampire jet was a big step-up from the Winjeel trainer, requiring careful attention to jet engine foibles. The benefit of the Vampire’s dual-controls and side-by-side seating for pilot and instructor greatly assisted the transition to solo flying. An important aspect of the AFTS Course was instrument flying and night flying, both essential in naval aviation.

Unfortunately some of Hutchison’s records are faded and illegible, but it appears he successfully completed the AFTS Course and graduated on 03 May 1964. On the following day he was promoted Acting Sub Lieutenant and granted a 7-year Short Term Commission in the RAN. Although presented with his ‘pilots brevet’ it was issued on a provisional basis until he had completed arrested landings and been catapulted from an aircraft carrier.

His next posting, on 23 May 1964, was to HMAS Albatross, the RAN Air Station at Nowra south of Sydney, where Hutchison joined 724 Squadron and began conversion to the anti-submarine AS1 Fairey Gannet turbo-prop aircraft. The next step was to successfully complete an Operational Flying School (OFS) course, which he finished on 26 October 1964. The OFS course is aimed at bringing pilots up to strict operational flying standard and involves many hours of intensive flying in the Gannet on day and night-time exercises, including gaining deck landing qualifications.

Having passed his OFS course Hutchison was posted to 816 Squadron the front-line anti-submarine squadron which embarked on the aircraft carrier HMAS Melbourne on 14 January 1965 to commence ‘working-up’ exercises prior to departing for South East Asian waters where Melbourne was conducting patrol duties the during the Indonesian ‘Confrontation’.

To detect Indonesian boats smuggling arms or infiltrating Malaysia, Fairey Gannets flew night-time patrols along the Strait of Malacca. Returning after a night sortie on 24 March 1965, Hutchison touched down on Melbourne at 0431 in Fairey Gannet WN456. The aircraft caught an arrestor wire, but the deck-hook broke allowing the aircraft to race unrestrained along the flight deck. Despite heavy braking the aircraft crashed over the ship’s port side into the sea. Two of the crew were rescued but after a lengthy search Hutchison was never found – the sea is his grave. ‘Hutch’, as he was known, was a popular and likeable young man and his loss was deeply felt by all.

A/SBLT John Morgan Hutchison is remembered at panel 3 in the Commemorative Area of the Australian War Memorial, Canberra. You can see his page here.

You can read a little more about WN456’s accident here.