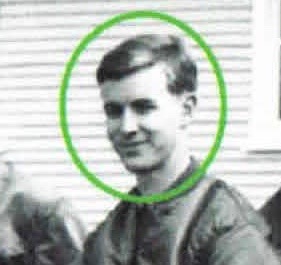 MIDN Michael Lynch, pictured at the end of his Basic Flying Training in July 1966.

Michael Lynch was born in Cobram (Victoria) on the Murray River on November 2 1945. His father Bernard Lynch was a well-known cricketer who would have played test cricket for Australia except for the intervention of the Second World – Bernard was Vice Captain of the Melbourne Cricket Club 1st XI and played in their winning premiership teams with Australian Test Cricketers. Mick spent many happy hours at the MCG watching cricket and his beloved Demons winning their premierships in the 50s ad 60s and saw them win their last one in 1964.

Mick lived most of his life in East Bentleigh with his father and mother Renee and his three younger siblings Margaret Mary, Christopher and Bernadette.

He was educated at St Patricks Murrumbeena and Christian Brothers College St Kilda where he was a good scholar and student and very popular with his peers and teachers He enjoyed all sports and represented the school in football, tennis and swimming.

Mick always had a love of aircraft and enjoyed making and flying model planes. This passion was encouraged by his uncle, Leo Linehan, who was in ARDU and Aviation Medicine at Point Cook, and who took him to air shows to climb over aircraft.

Mick had decided he wanted to be a pilot but his mother didn’t want him to fly (the Vietnam war was in progress). After long discussions she agreed he could he could join the services only if he got a job in the civilian workforce for 12 months first, so Mick dutifully went off and worked for The Customs in Melbourne.

Exactly 12 months to the day he applied to join the Navy and after preselection was one of the few chosen from the hundreds that had applied.

He joined the Royal Australian Navy as a Midshipman in March 1965 for Officer Training at HMAS Cerberus in Victoria. After a period of consolidation at sea aboard HMAS Sydney, he began basic flying training at RAAF Point Cook in November 1965 on the Winjeel aircraft. On completion in July 1966 he began advanced flying training on Vampire Jet aircraft at RAAF Pearce in Perth Western Australia. Mick attained his “wings” and graduated from Pearce in November 1966 with about 240 flying hours, of which 112 were in the Vampire.

Following graduation he was promoted to Sub-Lieutenant and began flying at the Naval Air Station at Nowra in New South Wales in February 1967 in Fleet Support roles with 724 Squadron. Over the next nine months Mick flew about another 112 hours on the Vampire Jets on regular fleet exercises involving tracking, radar calibration and tactical sorties with individual ships, multiple ships and for sorties with the Australian Army. He also achieved about 50 hours in the Dakota DC3 in preparation for conversion to the Grumman Tracker aircraft in January 1968 and then for operations on the aircraft carrier, HMAS Melbourne.

Mick had a girlfriend for many years, Christine Davis from Murrumbeena, and they decided three weeks before he was killed they would get engaged. He had purchased the ring.

Mick and his friend, Wally Gascoigne, flew two Vampires from Nowra to RAAF Laverton on 29th September 1967 for the workup for HMAS Parramatta in Port Phillip and Bass Strait following the ship’s refit at Williamstown dockyard. On October 11th 1967, he took off from Laverton with a passenger, Flying Officer Roy Barkley, on a serial connected to this task. (Barkley was reportedly due to start ground school for pilot’s course a few days later). During take-off his Vampire suffered a catastrophic failure of a rear engine bearing and being unable to abort in time, struck an obstacle at the far end of the runway and burst into flames. Both occupants were killed.

(With thanks to Tony Baillie) 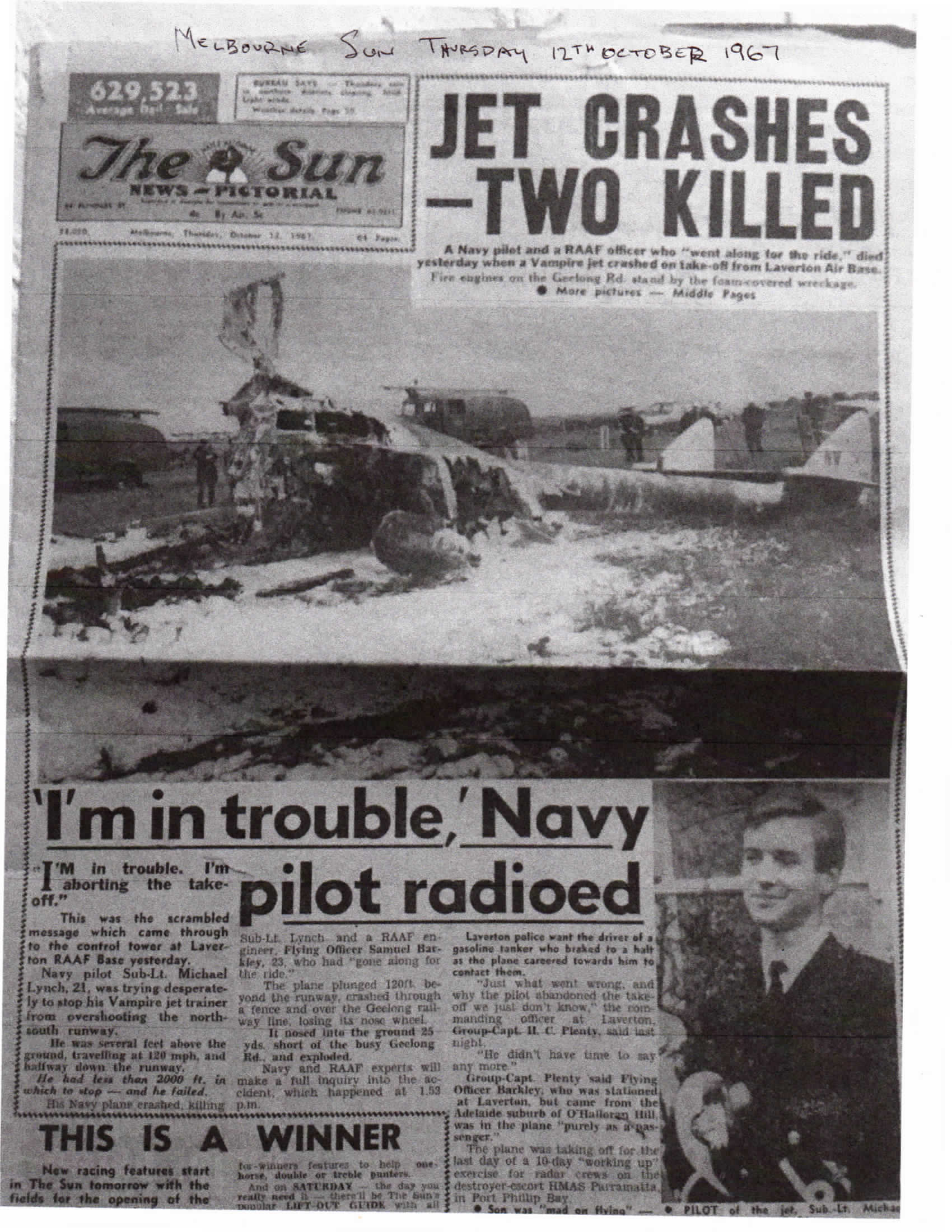 Below. Forty-six years after the accident, a freeway bridge close to the scene was named after the two lost aviators, with a plaque telling of the tragic story. 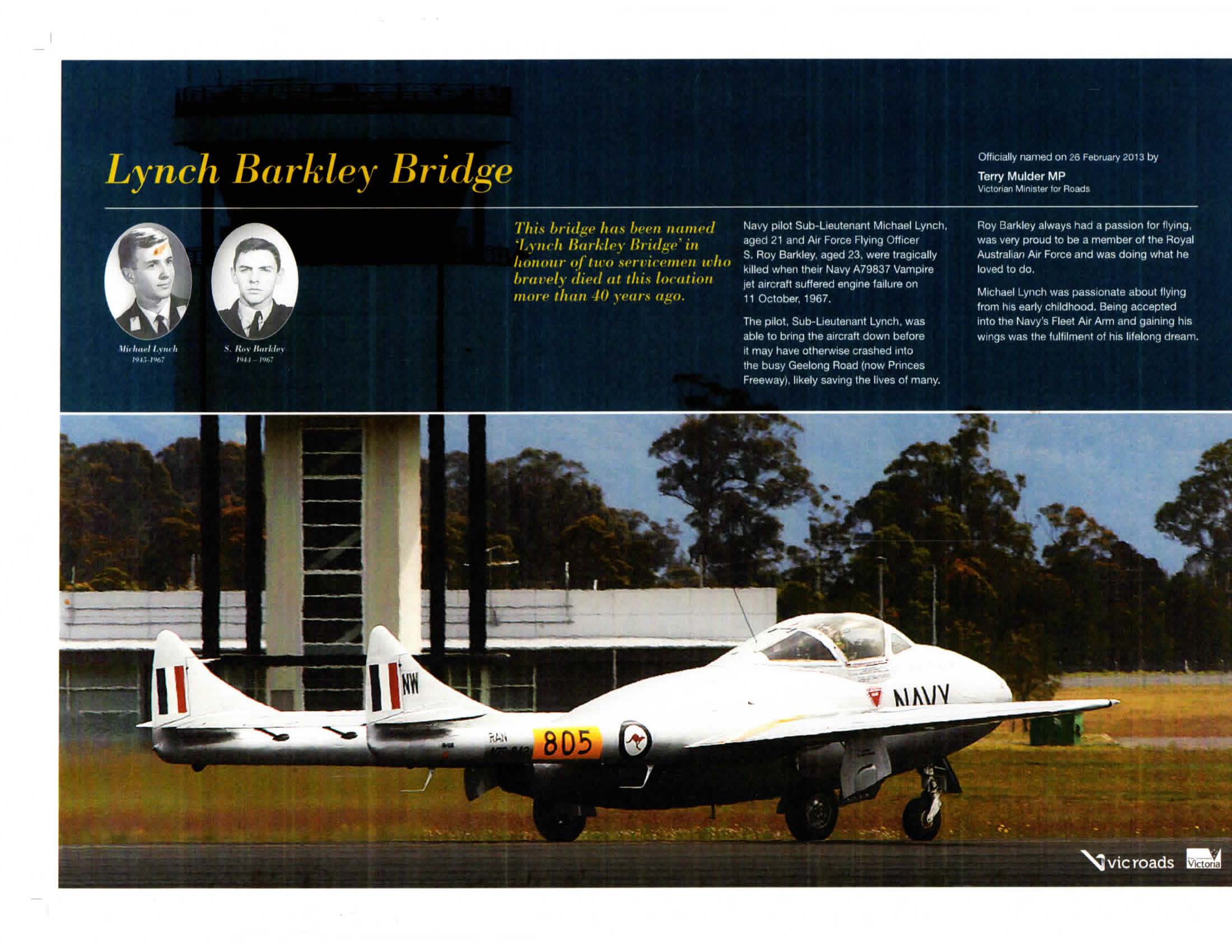