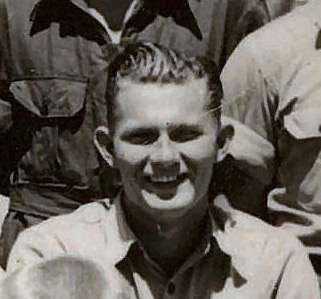 Leon Anthony Mauritz was born on 09 August 1936, at Morawa, an agricultural town and service centre in the ‘wheat belt’ of Western Australia, 370 km North of Perth. On 14 June 1957 he enlisted in the Royal Australian Navy (RAN), at Perth for a 6-year period, official number R53150. At the time of enlistment his employment is listed as schoolteacher.

Having joined as a Recruit Naval Airman his first posting was to Flinders Naval Depot (HMAS Cerberus) at Crib Point, South of Melbourne, where he began his basic naval training and was assessed for aircrew training. His next move, on 20 September 1957 was to HMAS Albatross the Naval Air Station at Nowra South of Sydney, rated as Provisional Naval Airman (Aircrew). Although some records are incomplete, at Nowra he would have continued his airmanship training, and maybe have gained some basic flying experience in a training aircraft.

On 06 January 1958, Mauritz was drafted to HMAS Kuttabul near Garden Island Dockyard, Sydney. Again records are incomplete, but the move would have been linked to his training with visits to ships, including the aircraft carriers HMAS Melbourne (ll) and Sydney (lll) together with navigation and anti-submarine subjects. It is likely there was a delay for trainees awaiting a pilot training course as on 13 October 1958 he was drafted to RAAF Pearce W.A., where he was enrolled the Basic Flying Training School to continue his airmanship training; first flying Winjeel trainers, then converting to Vampire jet trainers.

At RAAF Pearce the training was intensive, and it appears Mauritz applied himself well, as it is noted he was promoted to Provisional Naval Airman (P). He also successfully completed the Number 32 Pilots Training Course, becoming the most proficient pilot in weapons. Upon graduation at Pearce, on 15 April 1959, Mauritz was promoted to Acting Sub Lieutenant (P) and granted a 7-year Short Service Commission. He then returned to HMAS Cerberus (FND) for a Short Service Officers Course, covering duties as an officer and other divisional and administrative responsibilities.

On 28 May 1959 Mauritz was drafted to HMAS Albatross (RANAS Nowra). On 13 July 1959 he joined 725 Squadron, a fixed wing training unit where he began conversion to the Fairey Gannet anti-submarine aircraft. This was an important, advanced phase in his flying training. As the Gannet was the RAN’s front-line anti-submarine warfare (ASW) aircraft there was a plenty to learn. Training began in a dual-control Gannet trainer, progressing to solo flying with many lengthy exercises to build-up skills. Additional training included an Operational Flying School (OFS) course, aimed at bringing pilots up to front-line standard.

As Mauritz was scheduled to join 816 Squadron (the front-line ASW squadron) in early 1960, part of his training focused on single-engine exercises. The Gannet was a twin-engine turbo-prop aircraft with contra-rotation propellers on a single hub. By closing down one engine fuel could be conserved and flying time extended. On 15 October 1959, Mauritz was flying 725 Squadron AS1 Fairey Gannet, serial WN458, practising single-engine landings as part of his OFS, when his aircraft lost height and crashed in bushland 6 km from Nowra airfield.

The 805 Squadron Diary recorded the event as follows:

‘In the afternoon the O.F.S. carried out a circuit and landing practice during which Sub Lieutenant Mauritz crashed while attempting a single engined landing.  S/Lt Mauritz survived the crash in which the aircraft caught fire and was totally destroyed. He was taken to the sick bay via helicopter and ambulance suffering from serious burns and remains on the seriously ill list.’

Mauritz was subsequently transferred to Balmoral Naval Hospital, Sydney, where he died on 28 December 1959. He is buried in the Karrakatta Cemetery, Perth, Section EA Grave 169A.

A/SBLT (P) Mauritz RAN, age 23, was a talented and dedicated pilot, showing great promise in his chosen career in the RAN Fleet Air Arm. The crash and its aftermath was a deep shock to everyone, and a reminder of the sacrifice paid by a young man in the service of his country. 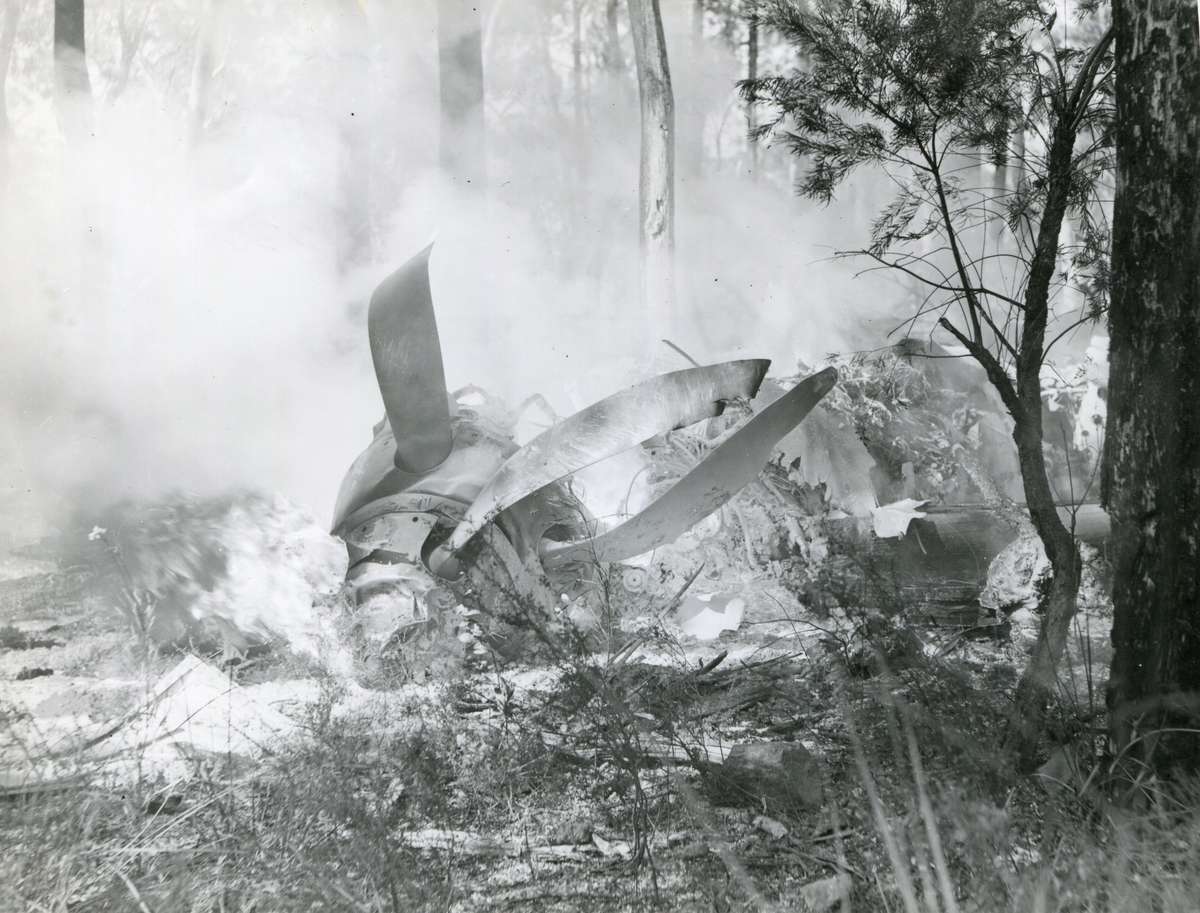 Above: the remains of S/Lt Mauritz’s aircraft after the accident. He survived the impact but died some two months later in hospital.

Below Left.  In late 2019 the Fleet Air Arm Association tracked down S/Lt Mauritz’s grave to Karrakatta cemetery in Perth.  The grave was neglected and the headstone lettering illegible.  The President of WA Division attended the site to attempt to refurbish the headstone and lay a fresh wreath of flowers on it, in memory of the young life lost.  Regrettably the lettering on the stone was of the ‘stick on’ variety and not much could be done.  The left hand page of the headstone reads: “In Loving Memory of Leon Anthony Mauritz Sub Lt RAN Fleet Air Arm Crashed Nowra NSW 15 October 1959. Died Balmoral NSW 28 December 1959 Aged 23 years.”

The photograph to the right shows the President of the WA Division, Mr. Greg Kelson, attending to S/Lt Mauritz’s grave at Kattakarra Cemetery. The grave also contains the remains of his mother, Beryl Mauritz, who passed away on 29 January 1982. Mauritz is buried next to Midshipman Ian Caird, another Naval Aviator who lost his life in a flying accident some two years earlier.   This part of the cemetery is earmarked for conversion to a ‘lawn area’ in the future, but the graves will remain under the turf with appropriate markings. 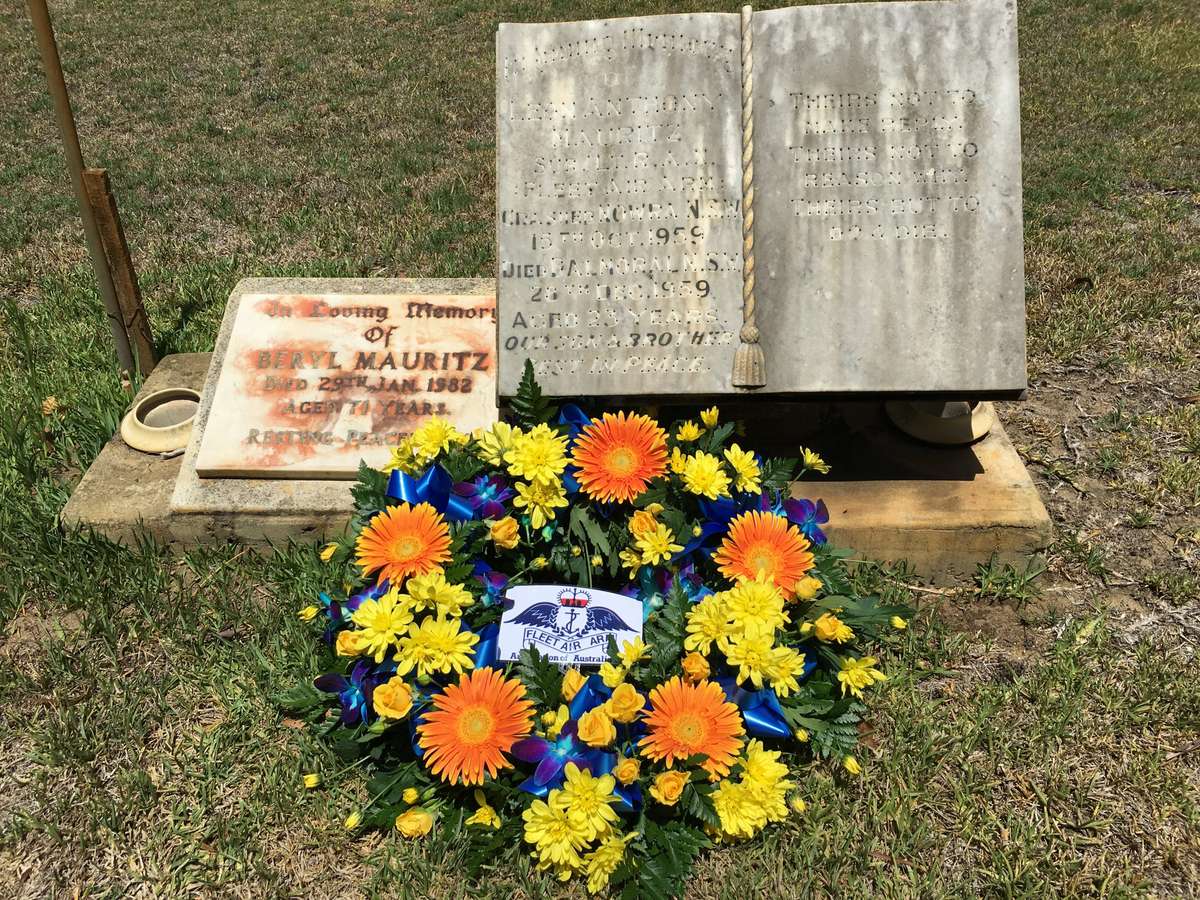 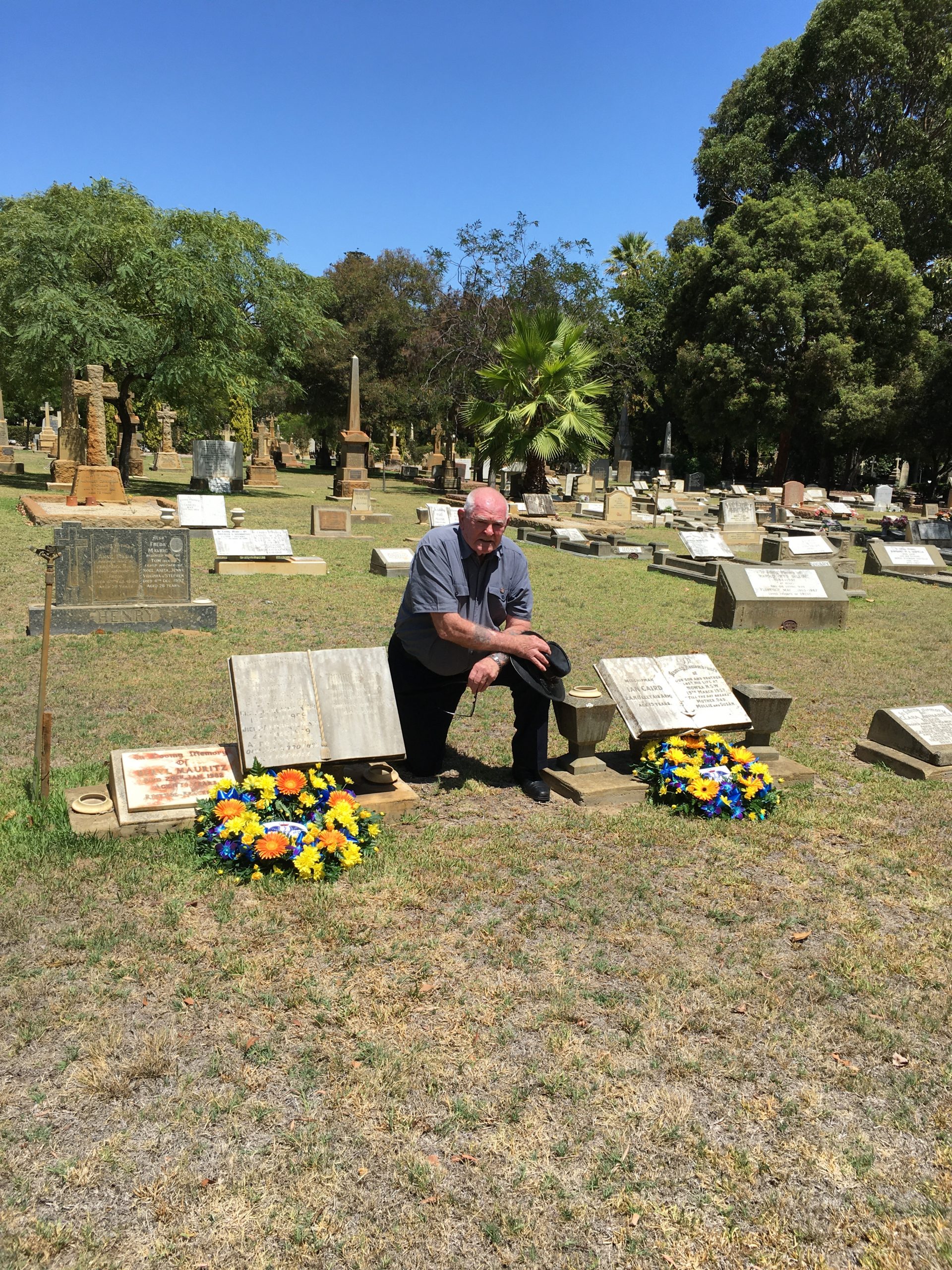