Richard Glyn Owen was born on 18 February 1929, at Wrexham, Denbighshire, UK. The details of Owen’s service in the Royal Navy (RN) are not available, but it seems he enlisted in the RN Fleet Air Arm (FAA) as a Midshipman Trainee Pilot, circa 1948/9. Following a medical check and aircrew assessment course, he was selected for pilot training. His first draft would have been to the Elementary Flying School at HMS Siskin, Gosport.

After successfully completing his EFS course, Owen would then have gone to RAF Syerston to continue his training to ‘wings’ standard. He would then have posted into the RN FAA base at HMS Fulmar (RNAS Lossiemouth), Scotland, for his Operational Flying School (OFS part 1) training. This involved converting to naval aircraft; navigation exercises; night flying and deck landing exercises on RN carriers. Owen would then begin his OFS part 2 training – in this case flying the Hawker Sea Fury as a fighter pilot.

On 1 September 1950, Owen was promoted to Acting Sub Lieutenant (P). Having completed his OFS part 2 course, the priority would be to gain further operational experience with a squadron operating from an aircraft carrier – to qualify for arrested landings, catapult take-offs and flight deck drill. When not at sea he would be assigned to a Squadron based at one of the numerous RN air stations. On 16 November 1952 Owen was promoted to Acting Lieutenant (P) and confirmed Lieutenant on 8 April 1953.

In the 1950s an exchange program operating between the RN and RAN gave aircrew the chance to be posted (on a short-term loan basis) for duties with the RAN FAA. On 20 June 1953 Lieutenant (P) Owen RN embarked on Flight BA704 for Sydney, Australia, on loan for approximately 12 months. Arriving on the 24 June, he reported to HMAS Albatross (RANAS Nowra) where he joined 808 Squadron, a front-line Hawker Sea Fury squadron, for flying duties.

On 10 September 1953, Owen joined 805 Squadron, a front-line Sea Fury squadron that was part of the Carrier Air Group (CAG) assigned to HMAS Sydney, which was preparing for her second deployment to Korea. The Korean ceasefire was declared on 27 July 1953, however, so the task for Sydney was to monitor the ceasefire and patrol the Korean peninsula.

805 Squadron (with 850 and 816 Squadrons) embarked on HMAS Sydney on 21 September 1953. Sydney then sailed north to Hervey Bay Qld for ‘work-up’ exercises to boost the Squadron’s efficiency and reset the ship’s routine for Korea. Afterwards, Sydney returned to Sydney Harbour to replenish, and on 17 October 1953 she departed for Korea, sailing via Fremantle, Singapore, and Hong Kong (where she relieved HMS Ocean). On route Sydney continued to ‘work-up’ the squadrons, exercising with HMS, USN, HMCS and HMA ships.

Sydney commenced her Korean duties on 20 November 1953. Her patrols worked to a schedule with the squadrons conducting flights along the ceasefire line and the coast; interspersed with re-supply trips to Kure, Sasebo, and other Japanese ports. This second Korean tour was generally quiet, but the winter weather was bitter, hindering some operations. On 1 May Sydney completed her patrol duties and sailed for Australia via SE Asia; arriving at Jervis Bay on 10 June 1954 where the squadrons disembarked to RANAS Nowra.

In March 1954 Owen requested that his loan period with the RAN be extended for a further two years, which the Admiralty granted. Because his service records lack details, it appears the reason for the request relates to his future marriage [to fiancé Mary – regrettably no dates or details are available].

On 27 July 1954, Owen transferred to 808 Squadron where he assumed duty as Senior Pilot, and for a short time he acted as squadron CO. With 808 Squadron due to be de-commissioned in October ‘54, Owen transferred to 723 Squadron, a second-line squadron providing fleet support, and assisting the Australian Joint Anti-Submarine Warfare School, based at RANAS Nowra, during ASW exercises.

About 26 Km from RANAS Nowra, there is a satellite airfield at Jervis Bay used by Nowra for aircrew training, emergency landings, and for positioning aircraft engaged in fleet operations, radar and W/T calibrations, gunnery spotting, ASW exercises and other uses – services generally provided by 723 Squadron. It was the most likely reason that Owen was flying Sea Fury VX753 over Jervis Bay airfield on the morning of Thursday 16 September 1954.

Apparently, the aircraft was manoeuvring at low level around the airstrip when it spun into the ground killing Owen. At the request of his wife Mary he was buried at sea. Accordingly, late in the afternoon of 17 September 1954, HMAS Tobruk embarked mourners and sailed from Jervis Bay, proceeding to the 100-fathom line where the body of Lieutenant (P) Richard Glyn Owen, RN, with full naval honours, was committed to the deep. 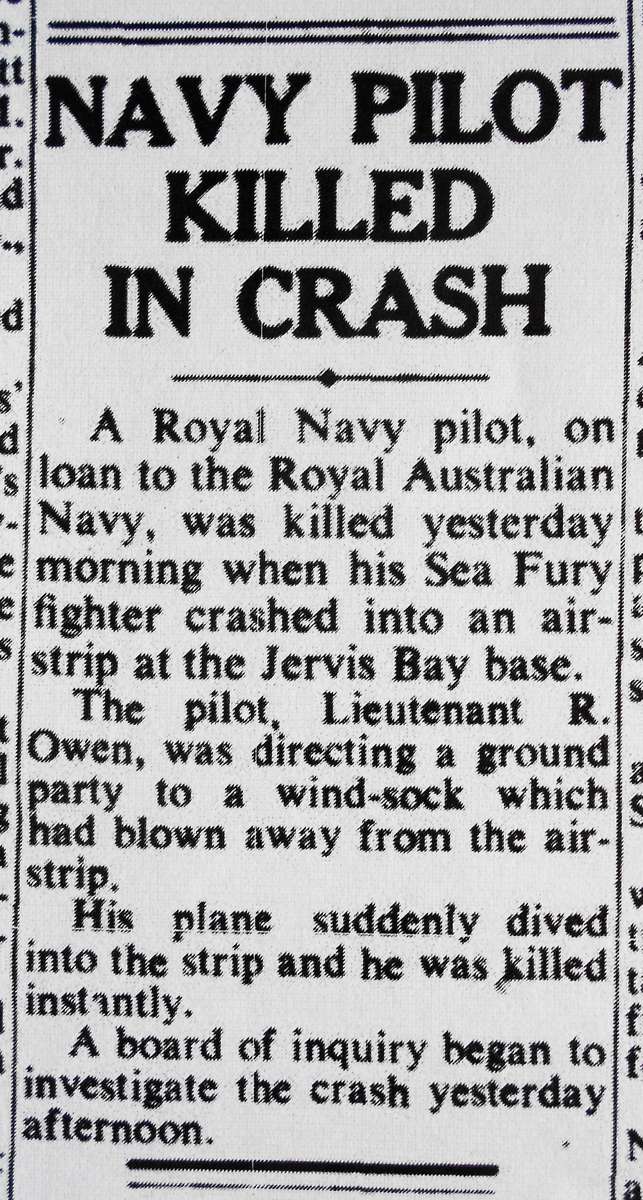 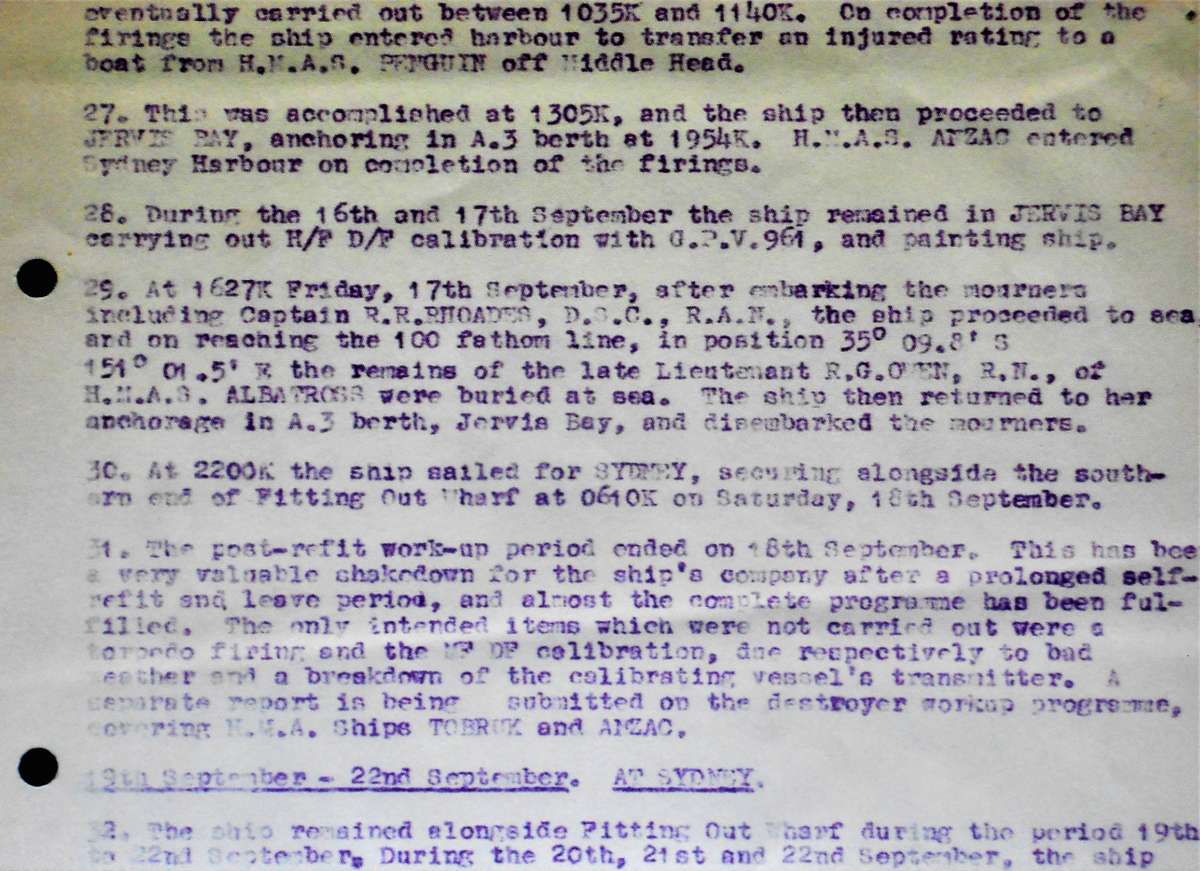 Note:  This RoH entry was the subject of some correspondence in November 2019, between the webmaster and a person who knew him as a young man in the UK.  The following is an excerpt from one of the emails:

“…Glyn, as I knew him, was 12 years older than me but I retain a clear recollection of him in his uniform as a Cadet off to BRNC Dartmouth where I was to follow him, and I still remember the shock when his mother, who was a close friend of my mother, received the news of his death. At our village war memorial, where on Remembrance Sunday I have the honour of reading out the names of the fallen in both World Wars, I also make mention of those who have given their lives since in their country’s service. It is fitting that after many fruitless lines of enquiry with our Ministry of Defence I have managed to track him down at this time through Google! I shall certainly have him in mind next year at this time. Thank you for having a “Pom” on loan to the RAN on your Roll of Honour.”