James Donovan SLATER and Edward Joseph EDMONDS were killed when their Firefly aircraft crashed into Beinn Uraraidh, Northern Ireland, on the morning of 25 September 1951.

Both men, from the Royal Australian Navy, were in training with No.737 Squadron at Prestwick but part of their combined training was detached to No.719 Squadron at Eglinton in Northern Ireland.  On the day of the crash the two took off in Firefly WB336 for a “controlled anti-submarine patrol exercise”, they were to take off and receive orders once airborne, they had been briefed with a safety height of 3000ft and were only to fly below that height should they encounter cloud and were ordered to remain below any cloud.  The weather was reported as being good that day, being mainly sunny with some scatter cumulus, especially around the Scottish islands.  Cloud was reported to be covering the hills on Islay during the morning of the 25th September 1951.

Their initial orders were to take departure from Portrush, near Coleraine, on a bearing of 024° for 30 miles and commence a grid search.  These orders were acknowledged at 10:19 and the aircraft took up course for its patrol area (30 miles at 024°T from Portrush would have taken the aircraft into the area around the Mull of Oa in the south of Islay).

Further orders were transmitted to the aircraft at around 10:30 and were repeated numerous times until 11:00, but none of these transmissions were acknowledged.  These were for the aircraft to abandon the grid search and adopt a sonobuoy dropping pattern.  At 11:10 the aircraft was declared missing as no contact of any kind had been made since 10:19 and a search by air and sea was started immediately.

A report of wreckage some 10 miles NW of Portrush was received from a RAF Lancaster at about 12:30 but this turned out to be unconnected and the search was switched the the Islay area after 14:15.  The wreck was spotted by an FAA Barracuda (one of the last Barracudas still in service at that point) at 15:40 on Beinn Uraraidh, it and later other aircraft circled the spot until a ground team arrived at nightfall (approx 19:20 BST).

The aircraft had broken up over a wide area along a roughly ESE to WNW line with wreckage being spread for about 1/3 of a mile. 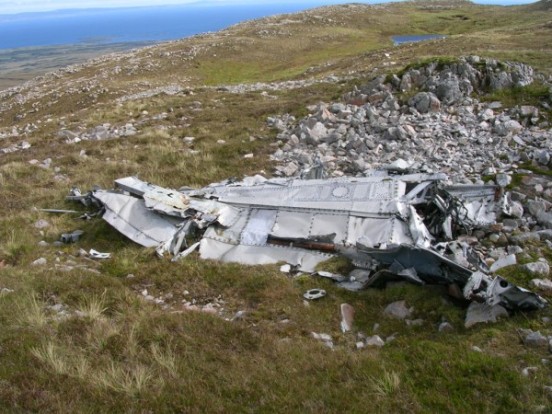 Both men were buried in St Canice’s Church of Ireland graveyard.  Their headstones read:

Edmonds was a trainee pilot on number 4 course at Point Cook in Victoria. He was flying solo in a Tiger Moth practicing aerobatics and put the aircraft into a spin at 4000 ft, but the aircraft did not respond to the recovery procedures. G forces prevented him bailing out and it spun into the ground in a flat spin. He survived with a small cut on his forehead. The following day, doing the same aerobatics with an instructor, he did a slow roll. When the aircraft was fully inverted the control column jammed and could not be moved. The instructor ordered Edmonds to bail out, but the weight on his Sutton harness made it impossible to remove the pin to release the harness. Accordingly, the instructor kicked the control column and broke the pencil jamming his control column. On landing Edmonds decided that flying was not for him, but he changed his mind and elected to do the Observers’ course with the Royal Navy in Northern Ireland. He was the first initial Australian to qualify as an Observer.

Prior to joining the Navy Edmonds was an ice hockey player in the Victorian team. He had a keen sense of loyalty to his country. His father was a TPI – the result of war service in New Guinea in WWII.

Edmonds had married a WREN a few months before his death. His widow Norma had a daughter and both migrated to Australia and settled in Victoria, where he had been born.