Barry Thompson was from Sydney and joined the RAN circa 1953 as  an aircrew trainee. He was selected for pilot training and, after flying instruction with the RAAF, he and his RAN pilot course-mates were sent to the UK for operational flying school. The course included weaponry and other operational flying skills plus deck landing on RN carriers. The aircraft flown were Hawker Sea Furies.

At that time the Korean War was taking place and because the RAN’s only aircraft carrier HMAS SYDNEY was involved, Thompson and co-graduates were sent to the British carrier HMS WARRIOR, for consolidation. WARRIOR in fact was sent to Korean waters and so the Australians became veterans of war very early in their careers.

After Korea Thompson and course colleague Ron McIver were sent late in 1954 to UK for training in all-weather-fighters (AWF) with the intention being for them to join the RAN’s new Sea Venom squadron on its formation. AWF training for RAN pilots was to be conducted with the Royal Air Force, firstly on Meteor 7 twin engine jet aircraft in Wales and then on Meteor NF 11s,  a two-seat intercept radar fitted aircraft in which the radar would be operated by an Observer. They were to join up with RAN Observers at Leeming in Yorkshire for intercept radar advanced training. So in 1955 Thompson teamed up with LEUT Keith Potts for this training which lasted about 4 months with most of the flying conducted by night. 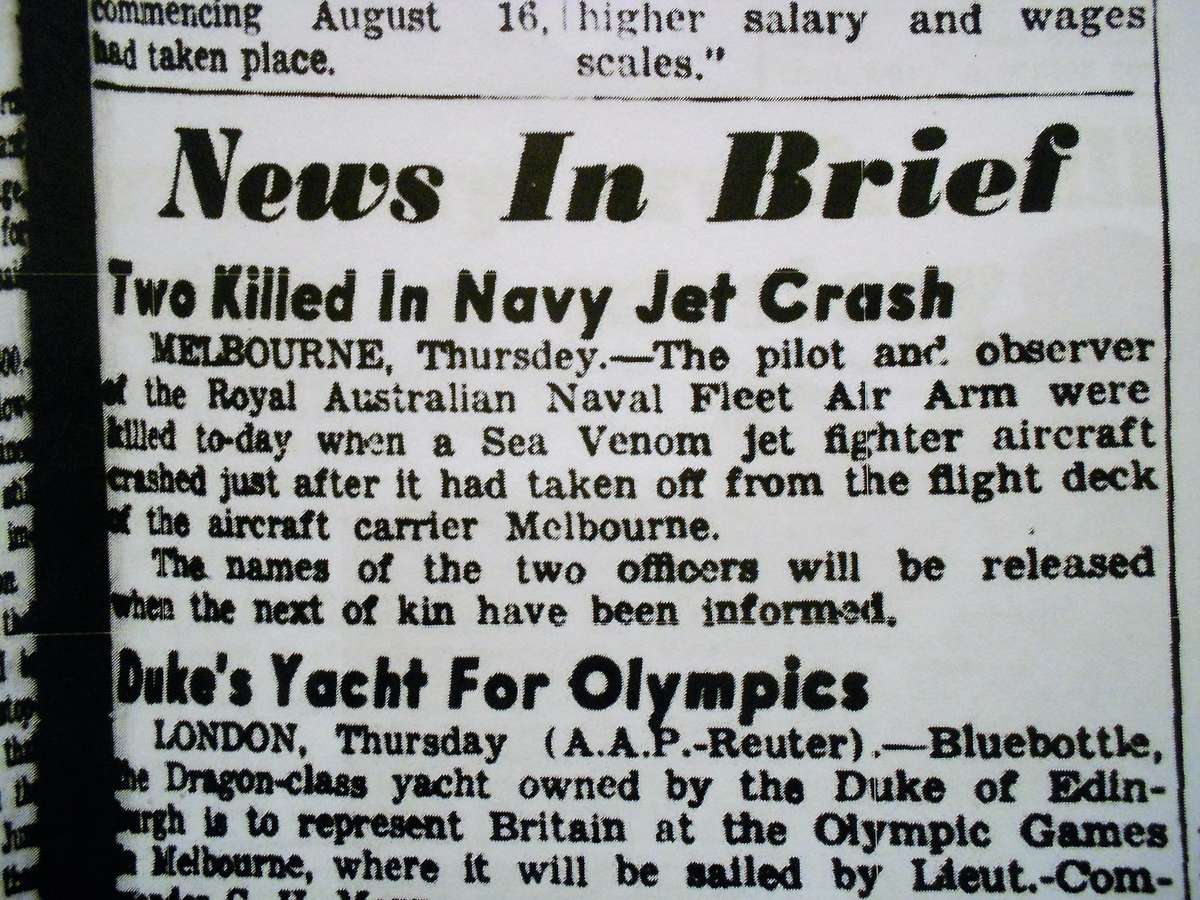 On completion of the RAF All Weather Fighter Course in 1955, Thompson and colleagues joined what was to become RAN 808 Sea Venom Squadron at RNAS Yeovilton in Somerset UK. The RAN’s first group of 4 AWF crews, including the CO (desig) LCDR George Jude, had already joined the Squadron which used RN Sea Venoms then being superceded in Royal Navy squadrons  by the larger de Havilland Sea Vixen AWF fighter. 808 Squadron was commissioned into the RAN in a joint ceremony at RNAS Culdrose in Cornwall on 23 August 1955. The RAN’s new Sea Venoms were being built at de Havilland’s factories in UK.

While at Yeovilton, Thompson’s long time fiancée Robin came over to England and another marriage was celebrated in a beautiful church in Yeovil. The happy couple took up local residence. Robin was a ballet dancer and when back in Australia some of the Squadron had the opportunity to see her perform in Swan Lake in Sydney.

In March 1956, the Squadron personnel embarked in HMAS MELBOURNE, the RAN’s new aircraft carrier, for passage back to Australia. Also onboard were new Sea Venom Mk 53 AWF aircraft and the new Fairey Gannet ASW aircraft. All the aircraft were cocooned to prevent corrosion from the elements. With spares and other stores and a number of private motor vehicles belonging to various members of the ship’s company, the ship was up to capacity in space and weight.

Voyaging through the Mediterranean, the Indian Ocean and western Pacific, MELBOURNE reached  Fremantle in April 1956 and after a short stay sailed to arrive in Jervis Bay for unloading.

After settling into NAS Nowra, receiving their new aircraft on completion of preparation, the Sea Venom and Gannet Squadrons were reformed and joined HMAS MELBOURNE in Jervis Bay in September 1956. The squadrons then began to get into the routine of operations at sea. After only a few weeks when the ship was off Hervey Bay in Queensland, tragedy struck. Two Sea Venoms were to be launched by catapult and the lead aircraft piloted by LEUTs Thompson and Potts mounted the catapult and on launching dropped the starboard wing and flew into the sea. Both of the crew were lost and their bodies never recovered.

The cause of this terrible accident could never be proven – some thought the ailerons had likely not been selected to power (as opposed to manual), others that the aircraft stalled but no cause could be firmly established without the aircraft wreckage.

A funeral service was held aboard HMAS Melbourne near Hervey Bay on 8 August 1956. The ship hove to, and two crosses were delivered into the sea by the Padre, in a very moving ceremony (see photo below).  The incident resulted in the Sea Venoms being grounded and offloaded, with the ship then proceeding to SEATO with Gannets for the remainder of the exercise.

Information courtesy of Neil Ralph.
Any further information about LEUT Thompson and/or this accident would be appreciated. 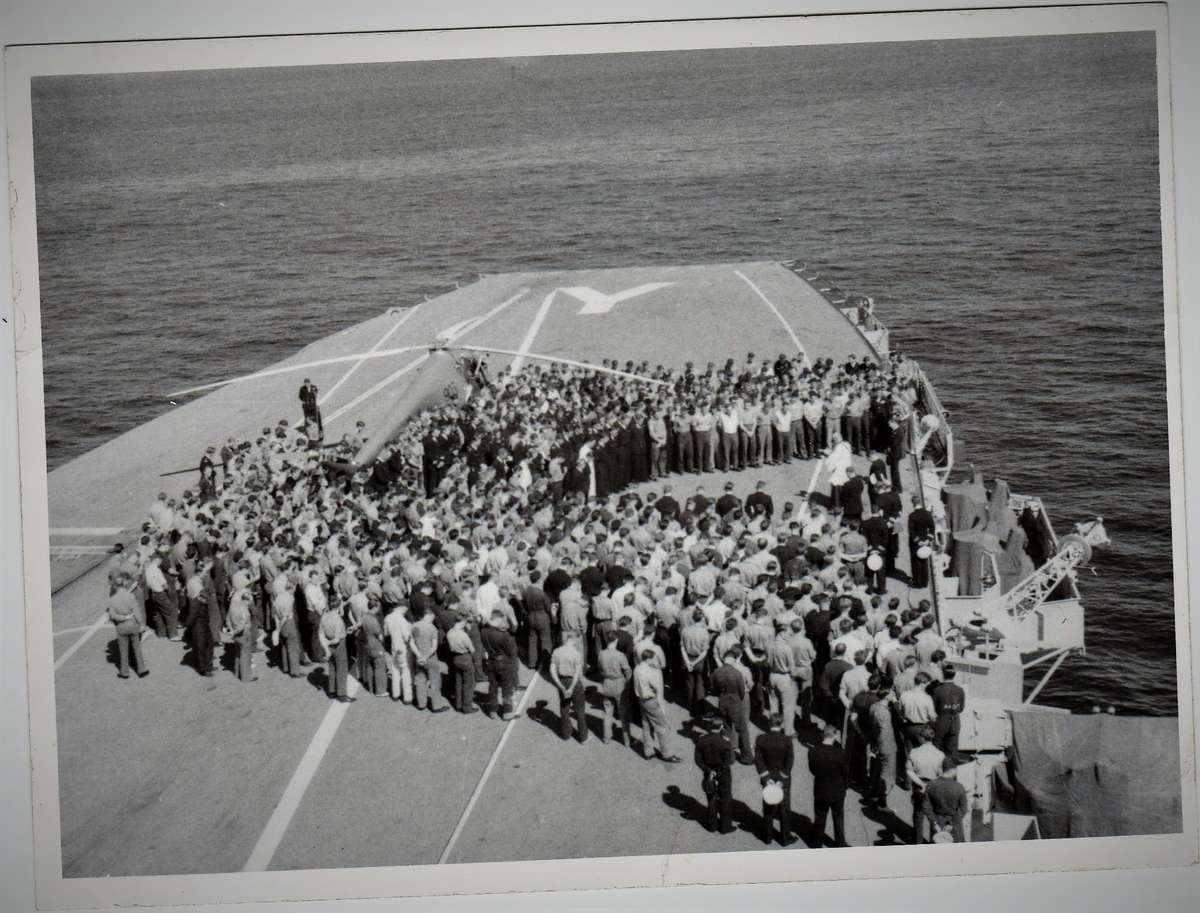