Brian Henry Francis Wall was Born on 6 July 1926 at Colombo, Ceylon (Sri Lanka). His mother Emily Wall of Darling Point, Sydney, was listed as his next-of-kin. Details of Wall’s early life and education are not available, but records show that he joined the Royal Navy (RN) on 1 May 1944 as a Dominion Special Entry Cadet. He graduated from the RN College with First Class Certificates for six subjects and Second Class Certificates for the remaining three – an excellent result.

Wall was promoted to Sub Lieutenant on 1 September 1946. Although his Branch is not specified, it is assumed to be General Service as there is no reference to the RN Fleet Air Arm (FAA). But in 1947/8 the RAN was advertising for officers and sailors to transfer to the newly formed RAN FAA. This may have been the motivation for Wall to seek a transfer from the RN to the RAN – which the Admiralty granted on 19 January 1948. Wall’s passage to Australia was by air – via a lengthy RAF Training Flight, arriving at Sydney on 27 February 1948.

On 28 February Wall reported for duty at HMAS Penguin where he completed transfer formalities and was appointed Sub Lieutenant RAN PNF. He was then drafted to the Tribal Class destroyer HMAS Bataan on 3 April 1948. Bataan was active in Australian waters, with trips to New Zealand and SE Asia, including two visits to Japan and Korea. Having gained his watchkeeping certificate, Wall was promoted Acting Lieutenant on 30 June 1948, then confirmed Lieutenant in October 1948. The records are unclear, but at some stage Wall was drafted to HMAS Woomera then HMAS Kangaroo. At around this time he was assessed suitable for FAA Observer training.

On 2 June 1950 Wall embarked on HMAS Sydney for passage to the UK, where he would begin his Observer Course (Sydney was visiting the UK to collect the 21 CAG aircraft). After arriving in the UK Wall spent a short time with Sydney while the ship ’worked-up’ with the 21 CAG aircraft, then on 4 September 1950 he was transferred to HMS Merlin (RNAS Donbristle) in Scotland for the start of his Observers Course. RNAS Donbristle was an important FAA training base with a focus on navigation and practical exercises.

The next move, on 13 October, was to HMS Daedalus (RNAS Lee-on-Solent) in Hampshire, a major FAA Technical Training Centre and Survival School. This was followed, on 1 February 1951, by more Observer training at HMS Vulture (RNAS St Merryn) at Cornwall with radar and fleet exercises over the ocean. Arriving at HMS Gannet (RNAS Eglington), Northern Ireland, in August, he began a series of anti-submarine exercises which continued until November 1951.

Wall’s ability as an Observer was highlighted as he finished the course top of the class of eight. Having completed his Observer Course, Lt Wall (O) embarked on RMS Strathnaver for the return journey to Australia, arriving on 22 November 1951. After taking a leave break, on 14 January 1952 Wall reported for flying duties at HMAS Albatross (RANAS Nowra), the main RAN FAA base, where he was assigned to 816 Squadron, one of the front-line Carrier Air Group squadrons.

816 Squadron was equipped with Fairey Firefly AS5 aircraft. They had a crew of two (Pilot and Observer) and could variously carry bombs, depth-charges, or unguided rockets, with some equipped with 20mm cannons. As anti-submarine work was a major part of 816 Squadron’s duties, it was important for new aircrew members to begin a program of exercises that would bring them up to front-line standard. Wall as an Observer played a key role in plotting flight plans, operating the ASH radar, and positioning sonar buoys (hydrophones) in anti-submarine operations. These intensive training exercises were carried out during daylight hours and at night-time.

It was during one of these training exercises that Wall was an Observer in a Firefly conducting a night-time anti-submarine patrol along the South Coast of NSW, when it was reported overdue. Its last reported position was south of the coastal town Moruya. Although it was late at night an intensive search began. Air Sea Rescue craft from Jervis Bay were dispatched and aircraft from Nowra flew a search pattern up to 30 miles out to sea, together with RAAF aircraft. Several RAN ships from Sydney were sent to quarter the area.

The search continued for several days, but no trace of the Firefly or its crew was ever found. On Tuesday 19 February 1952 Lt (O) Brian Henry Francis Wall RAN and the pilot A./Sub Lt (P) Douglas Hamilton Saunders were declared missing presumed dead.

Below:  A Fairey Firefly of the type in which Wall and Saunders were lost. 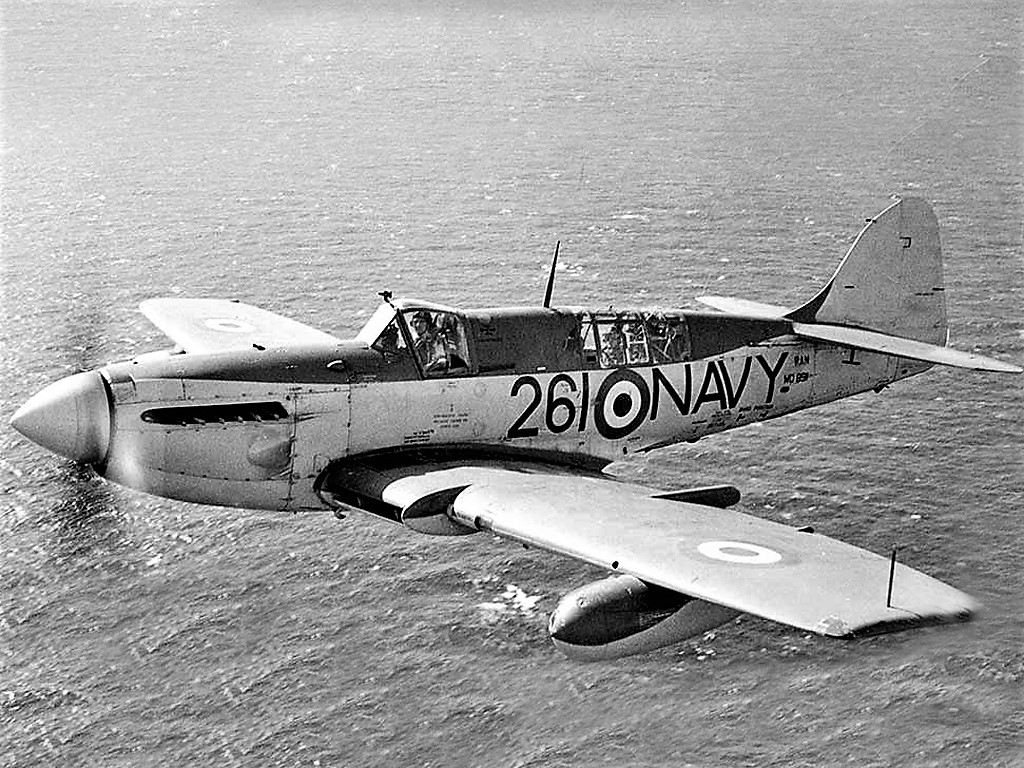