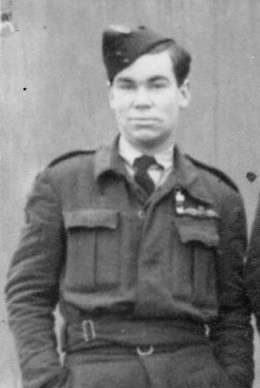 Wilson as a Flight Sergeant in the RAAF in February 1945.  At the time he was a Lancaster captain.

Keith Wilson was born on 8 April 1924 at Alberton, a suburb of Adelaide, South Australia. A city renowned for its parklands and healthy, sunny environment. No details are available about his childhood or education, but upon leaving school he was employed as a Postal Assistant.

Following the Japanese bombing of Darwin on 19 February 1942, the Australian government mobilised the army and air force. On 29 April 1942, at the age of 18, Wilson enrolled in the Royal Australian Air Force Reserve. He was soon called-up and, on 9 June 1942, at the RAAF Adelaide recruiting office he was sworn-in. His father Frederick Wilson was given as next-of-kin. His first posting was to Port Pirie Recruit School, then to Victor Harbour for additional training. On 28 December 1942 he moved to Parafield where he began his Elementary Flying Training on Tiger Moths. On 28 August 1942 he was promoted to Trainee Airman (P).

As a trainee Wilson spent time at various airfields, accruing 180 hours on Avro Anson aircraft. On 2 February 1943 he was promoted to LAC (P). Wilson was then posted overseas, embarking on a ship for the UK on 4 November 1943. He arrived in the UK in early December and joined the Advanced Training Unit, flying Airspeed Oxfords. On 26 July 1944 Wilson was promoted Flight Sergeant (P). Next, he was assigned to the Operational Training Unit, for instruction on the Vickers Wellington. After that he was posted to the Heavy Conversion Unit where he began flying Avro Lancaster bombers.

On 5 February 1945, Wilson arrived at North Killingholme, Lincolnshire, where he joined 550 Squadron flying Avro Lancaster bombers and on 26 February he was promoted Warrant Officer (P). 550 Squadron was formed in 1943 and was engaged in bombing German targets until 7 May 1945, when the Germans surrendered. The squadron also ferried food supplies to the Netherlands during the ‘Operation Manna’ relief effort. The squadron then disbanded on 31 October 1945. Earlier, on 8 April 1945, Wilson was promoted to Pilot Officer. With the war in Europe ending he boarded a ship, on 4 October 1945, for his return journey to Australia arriving on 29 October 1945.

Following the Japanese surrender, on 2 September 1945, Wilson was discharged from the RAAF active list on 19 December 1945. On termination he was eligible for the 1939-45 Star, the France and Germany Star, the Defence Medal, and the Returned from Active Service badge.

Wilson then took accumulated leave and at the age of 21 began readjusting to civilian life. Like many young men demobbed from the RAAF he sought a career in aviation, but opportunities were limited. When the Royal Australian Navy’s advertising called for pilots he applied for a transfer from the RAAF Reserve. On 3 February 1948 Wilson enlisted in the RAN as a probationary, Acting Lieutenant (P). His first posting was to HMAS Cerberus, the naval training centre at Western Port Bay, near Melbourne, here he attended a course for officers transferring to the RAN. Upon completion of the program his probationary status ended.

To gain General Service experience Wilson was posted to the Tribal-class destroyer HMAS Arunta for watch-keeping, radar training and other duties, from 12 July to 10 December 1948. He then took leave at his home port Adelaide. Having completed his RAN transfer training Wilson’s next step was to begin his Fleet Air Arm conversion course, which would take place in the UK. On 17 January 1949, Wilson boarded RMS Strathaird for the journey to England. On arrival he was drafted to RAF Syerston, Nottinghamshire, No 22 Flying Training School, where the Fleet Air Arm conversion courses took place, finishing on 29 March 1949.

His next posting, on 30 March 1949, was to HMS Fulmar, RNAS Lossiemouth, Scotland, for a ‘strike’ weapons training course, which ended on 6 July when he was transferred to HMS Gannet, RNAS Eglington, Northern Ireland, for Part 4 of his course. In early October he was posted to HMS Vulture RNAS St Merryn, near Padstow, Cornwall, where he joined 796 Squadron for familiarisation and conversion to other FAA aircraft. On 17 October 1949 he moved to HMS Dryard at Southwick, Hampshire, for a warfare training course, this course involved time at HMS Daedalus, RNAS Lee-on Solent, a major RN FAA training and administrative base where he arrived on 5 December 1949 for weapons training.

In all Wilson completed a rigorous FAA training course. On 22 May 1950 he returned to HMS Vulture, RNAS St Merryn where he was assigned to 817 Squadron – part of the 21st Carrier Air Group – which was re-commissioned on 25 May 1950. 817 Squadron was the RAN Fleet Air Arm’s second Fairey Firefly squadron. It was formed at St Merryn to train the RAN FAA’s Firefly aircrews prior to shipment to Australian on HMAS Sydney in October 1950.

The Fairey Firefly FR5 was a rugged piston-engine aircraft, with a crew of two; the pilot and observer had separate cockpits. It was originally designed as a fighter reconnaissance aircraft, but many of the 817 Fireflies were modified as AS5/6 variants for anti-submarine work. The RAN FAA Sea Fury and Fairey Firefly squadrons based at HMS Vulture had an intensive training program, including flight deck operations and fleet exercises. As part of the regime Firefly crews would do live firings at the nearby School of Naval Warfare Treligga bombing range.

On 10 July 1950, Lieutenant Keith Wilson (P) and Petty Officer Leonard Kenderdine (O) were briefed to conduct exercises at the Treligga range flying Fairey Firefly AS5 VT395. During the flight Lieutenant Wilson encountered engine trouble and decided to make an emergency landing at the nearest open space, which was Treburrick Farm near St Merryn. After making a wheels-up touch-down the Firefly hit a thick hedge row, causing the aircraft to break up and catch fire. Although badly injured Petty Officer Kenderdine managed to escape, but Lieutenant Keith Frederick Wilson (P) RAN was engulfed in flames and died at the scene. 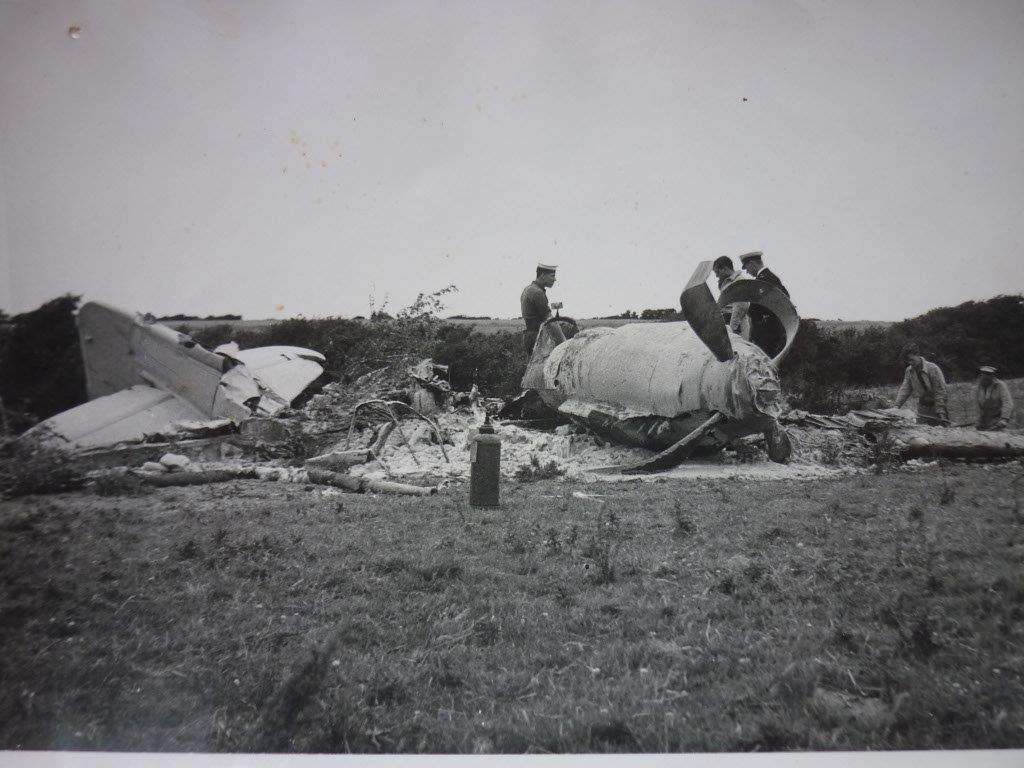 Above:  LEUT Wilson’s aircraft at Treburrick Farm, St Merryn on 10 July 1950 (image: HMS Vulture dated 10/7/50).  Below:  although not confirmed, the two photographs are believed to be of LEUT Wilson’s funeral.  The headstone on his grave at St Merryn cemetery erroneously records the date of his death as 19 July 1950. 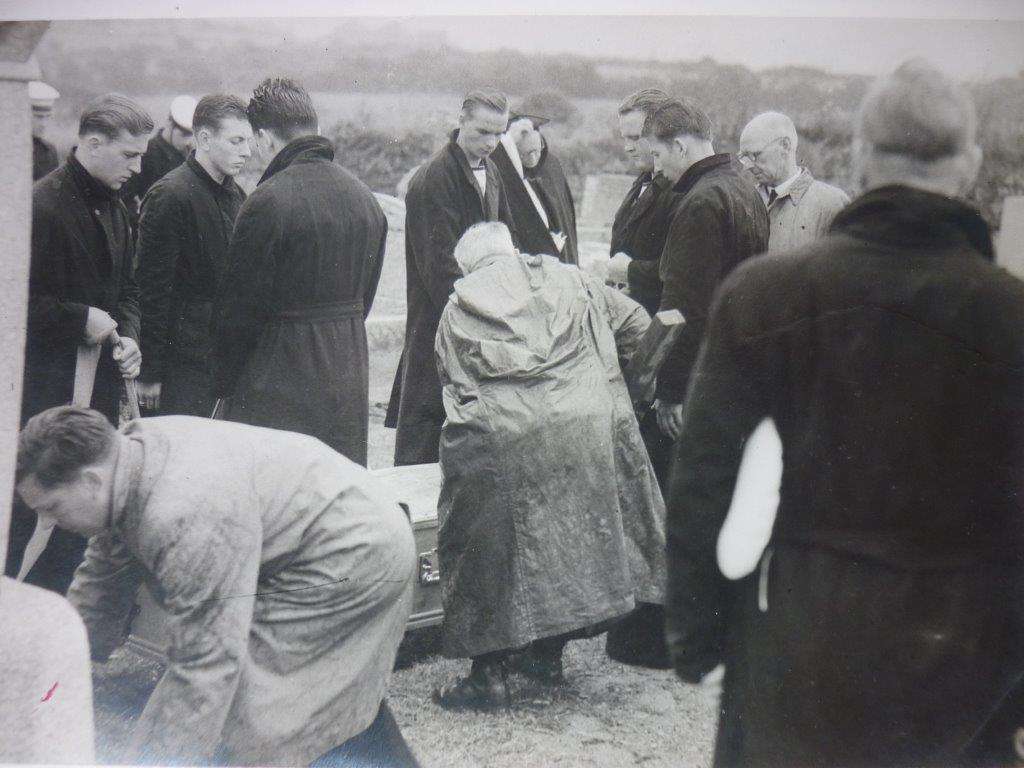 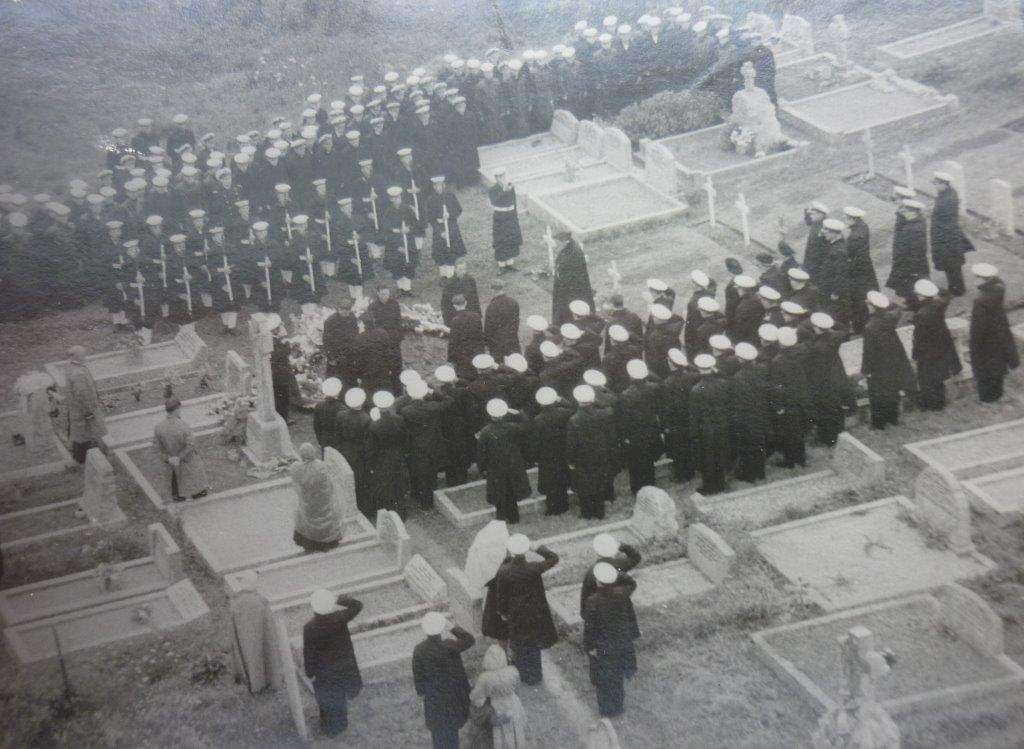 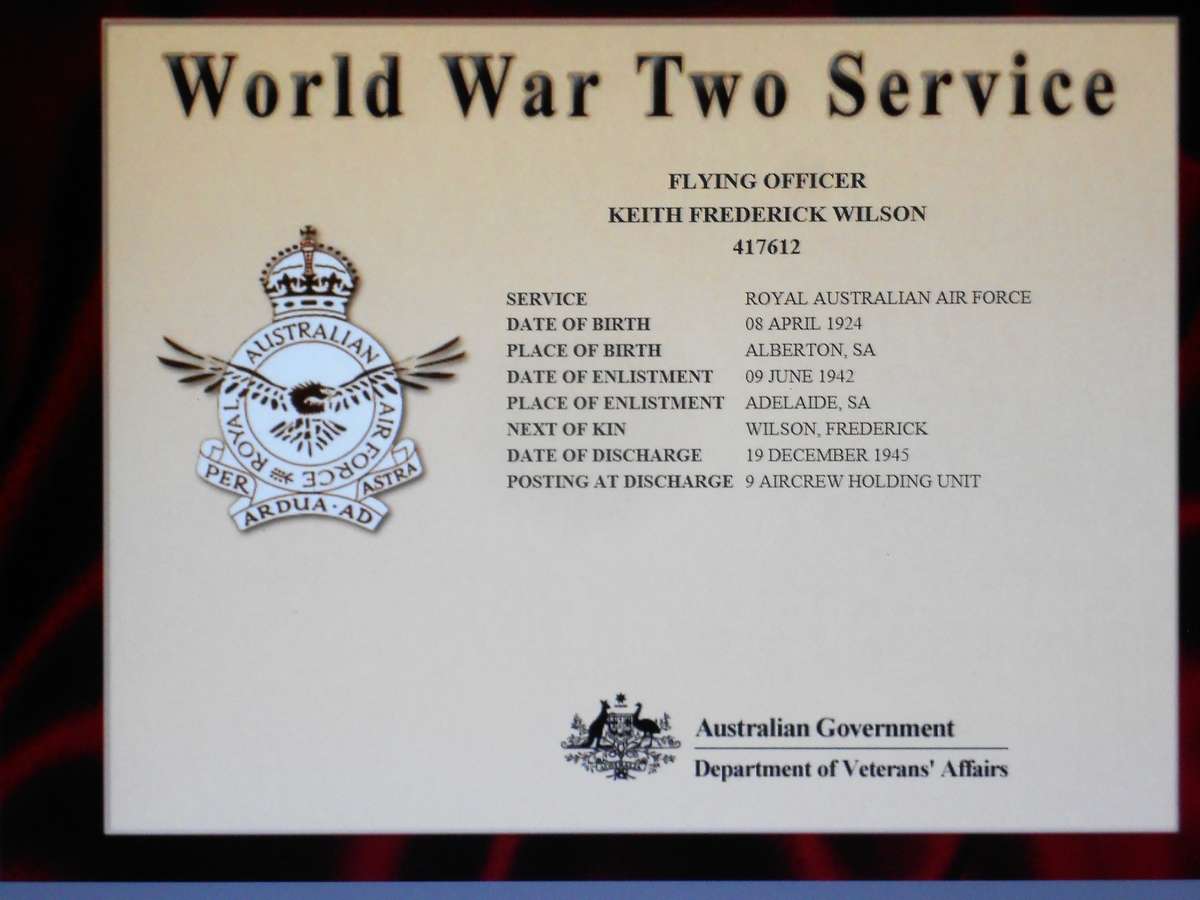