Noel Ferris was born on 27 September 1924 at Armidale, the administrative centre for the Northern Tablelands of NSW. There is no information about his early childhood, but the Armidale High School (established in 1920) is most likely where he received his education; as his teenager he was a bank clerk which required a good education.

In early 1942, with WW2 raging and the Japanese threatening Australia, the mobilisation of able-bodied men for military service was stepped-up. On 29 September 1942, just two days after his 18th birthday, Ferris enlisted in the Australian Army at Paddington, Sydney. His father William Ferris is listed as next-of-kin.

After initial training in Sydney he joined the Army Field Survey Training Unit, at Caulfield, a suburb of Melbourne, with the rank of Private. But Ferris sought a different service career; one more in keeping with his abilities and was discharged from the Army on 18 February 1943.

On 20 February 1943 Ferris enlisted in the RAAF at Melbourne Vic. Because his RAAF service records are not open for public viewing, the available information is limited to knowing that his service number was 430584. Details from RAN sources indicate he obtained his ‘wings’ and was promoted to Flying Officer with Wellington, Stirling, and Lancaster aircraft experience. At some point he was overseas attached to RAAF 463 Squadron.

There are one or two records available of his flights time in 463: for example, in a Mk. 111 Lancaster ME748 on a strike of Lutzkendorf on 8/9 April 1945 when he was hit by flak and lost both inner engines. With the aircraft rapidly losing height Ferris ordered the crew to bail out, which they did successfully.  (ADF Serials).  A further mention is made when he flew as pilot in command on Lancaster Mk.1 RF152 to Tonsberg, which was the final mission for 463 Squadron, on 25/26 April 1945 (ADF Serials).

Flying Officer N S Ferris was discharged from the RAAF on 4 February 1946. 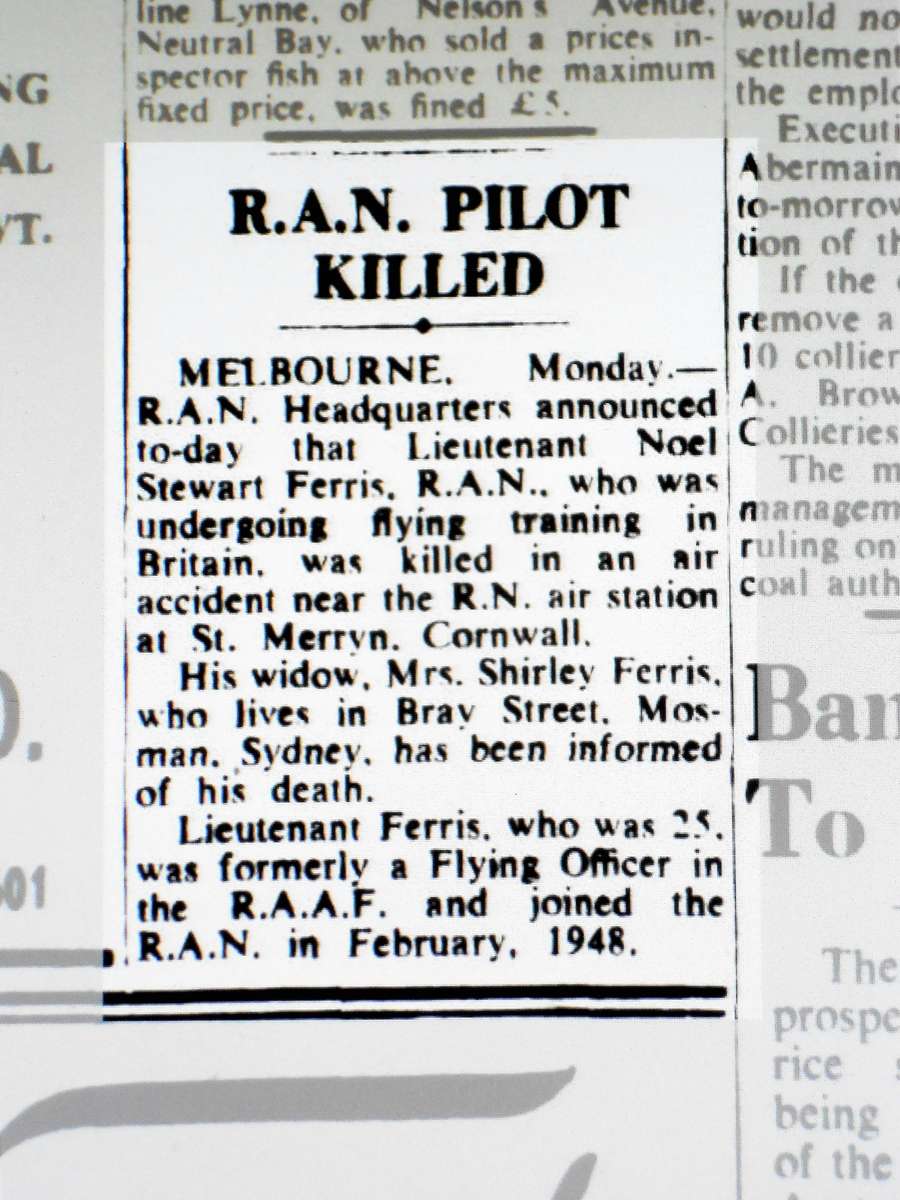 It appears that he then returned to his home town of Armidale, as on 7 April 1947 he married his sweetheart Shirley (nee Whildon) with their address given as Armidale.

As a young married man with flying experience, seeking a secure job in aviation, Ferris would have been attracted to the Royal Australian Navy (RAN) advertisements about vacancies for aircrew in the Fleet Air Arm. On 3 February 1948 he was sworn-in as a probational Acting Lieutenant (P) in the RAN, and was posted to HMAS Cerberus FND, the RAN training school at Melbourne’s Western Port Bay, for an RAN induction course. On 10 July 1948 he was confirmed as Lieutenant Ferris (P) RAN. Then for further seamanship training, he was drafted to the Tribal-class destroyer HMAS Arunta from 12 July 1948 to 9 December 1948. After several weeks leave both Ferris and his wife Shirley took passage on RMS Strathaird to the UK in January 1949, for training and flying conversion courses.

He arrived in the UK on 16 February 1949, and joined No 22 Flying Training School at RAF Syerston, Nottinghamshire. Then on 30 March he moved to HMS Fulmar RNAS Lossiemouth, Scotland, for a ‘strike’ course. The next posting on 6 July 1949 was to HMS Gannet, RNAS Eglington, Northern Ireland, for a second, high grade ‘strike’ course with live ammunition. In October he went to HMS Vulture RNAS St Merryn, near Padstow, Cornwall, exercising with 796 Squadron. Then for a warfare training course at HMS Dryad, at Southwick, Hampshire, followed in December 1949 by a further SMAC course at HMS Daedalus RNAS Lee-on-Solent, Hampshire, a major training base for the Fleet Air Arm.

By this stage Ferris would have been in the final stages of his FAA training and have been instructed in landing on the deck of an aircraft carrier. Details are not clear as to which airfield he departed from, but Ferris was piloting a Fairey Firefly FR1 (serial DK532) aircraft on 22 February 1950 and at about 4 pm, near Padstow, Cornwall, when the engine apparently failed and the aircraft crashed into the sea. He was rescued by a naval launch from Padstow, but died later. He is buried at St Merryn Parish Church, Cornwall. UK.

Following an inquest, the ‘Cornish Guardian’ reported the incident as follows:

‘The pilot of an aircraft [which crashed into the sea off Padstow on 22 February 1950] was rescued alive but later died in hospital, a post mortem examination, revealing that he died from drowning. Lt Ferris’s aircraft nosedived into the sea outside the Camel estuary.

He was picked up by a rescue launch within 20 minutes through prompt action of the people who saw the crash from the shore. It was stated at the inquest that, although it was unusual, it was not impossible for a man to die from drowning sometime after being taken out of the water. Mr R S Males, a volunteer coastguard at Polzeath, said he heard the engine of the plane splutter and cut out and saw the machine go into a vertical dive into the sea. Mr S Roberts, the coxswain of the naval rescue launch at Padstow, said he was guided to Lt Ferris by a Lancaster of Coastal Command from St Eval. While artificial respiration was being applied, Lt Ferris sat up and asked, “where am I?” The County Coroner, Mr E W Gill, recorded a verdict of cardio respiratory failure caused by the accidental crashing of Mr Ferris’s plane into the sea.”