Francis G. Gordon was born on 15 January 1913, at Portsmouth, UK, the son of Mary and Albert Gordon. At some point the family moved to Australia, although the details are not known. His mother was listed as next of kin, living in Collins Street, Melbourne. Melbourne is also where Gordon enlisted in the RAN for a 12-year term on 1 October 1930.

Gordon entered Recruit School at HMAS Cerberus (Flinders Naval Depot) on Western Port Bay, south of Melbourne, progressing to Ordinary Seaman on 15 January 1931. After further training he was drafted to the heavy cruiser HMAS Canberra in June of that year, where he was promoted to Able Seaman on 28 March 1932. His next draft was to the UK, arriving in August 1933. After spending time at Portsmouth, he joined the destroyer HMAS Vendetta (1), the day it was commissioned at Chatham on 11 October 1933. On 1 January Gordon was made Acting Leading Seaman and posted to HMAS Australia embarking on 9 January 1934.

Gordon achieved good results in Higher Education Exams, qualifying him for future promotion. His next draft was to HMAS Canberra where he was confirmed Leading Seaman on 1 July 1935. A Naval Selection Board on 4 March 1936 recommended him as a candidate for promotion to Commissioned Rank. On 29 April 1936 Gordon was made Acting Petty Officer and advised that he was selected for promotion to Officer, pending graduation from the course.

On 28 July 1936, Gordon boarded SS Maloja for the UK. He arrived at Plymouth on 5 September 1936 having been appointed Acting Sub Lieutenant. At the Royal Naval College, on 24 September 1936, he began his officer course which was completed on 26 March 1938. Returning to Australia SBLT Gordon took leave. After a period at Cerberus he was drafted to HMAS Sydney on 4 June 1938, where he gained his Watchkeeping Certificate on 16 December 1938 and was promoted to Lieutenant. This was a critical time in world affairs, as the troubles in Europe soon built to a climax; with war declared on 1 September 1939.

At some point the question of branch specialisation had been raised with Gordon. Although seamanship was his first choice, he took the opportunity to become a Fleet Air Arm Observer. Having served on HMAS Australia and Canberra, both of which operated the Supermarine Seagull 111 and later the Seagull V amphibians (with an Observer as part of the crew) Gordon would be familiar with an Observer’s duties. On 8 February 1940 he sailed on RMS Strathmore, from Melbourne to the UK, where he began his specialist naval aviation Observers course.

Gordon started his Observers course at Portsmouth, which ran from April to June 1940. [Note: Although his Record of Service card is in faded pencil, it appears that Gordon married his wife Ann at Portsmouth on 5 June 1940 – details not available]. Over the next 12 months, further training and operational experience was gained at various Royal Navy Air Stations. He was then drafted to the aircraft carrier HMS Furious and shortly after, on 14 August 1941, he was posted to the aircraft carrier HMS Victorious as an Observer. At the time Victorious was operating in the North Sea, covering Home Fleet duties up to Iceland searching for German ships and submarines.

Lieutenant Francis G. Gordon (O) RAN died on 23 February 1942 at the age of 30. He was in an 817 Squadron Albacore torpedo aircraft, one of three that took off from HMS Victorious on a night search for enemy vessels, including the German battleship Tirpitz. The aircraft did not return to the carrier and was presumed lost in snow storm 30 miles east of the Shetlands. 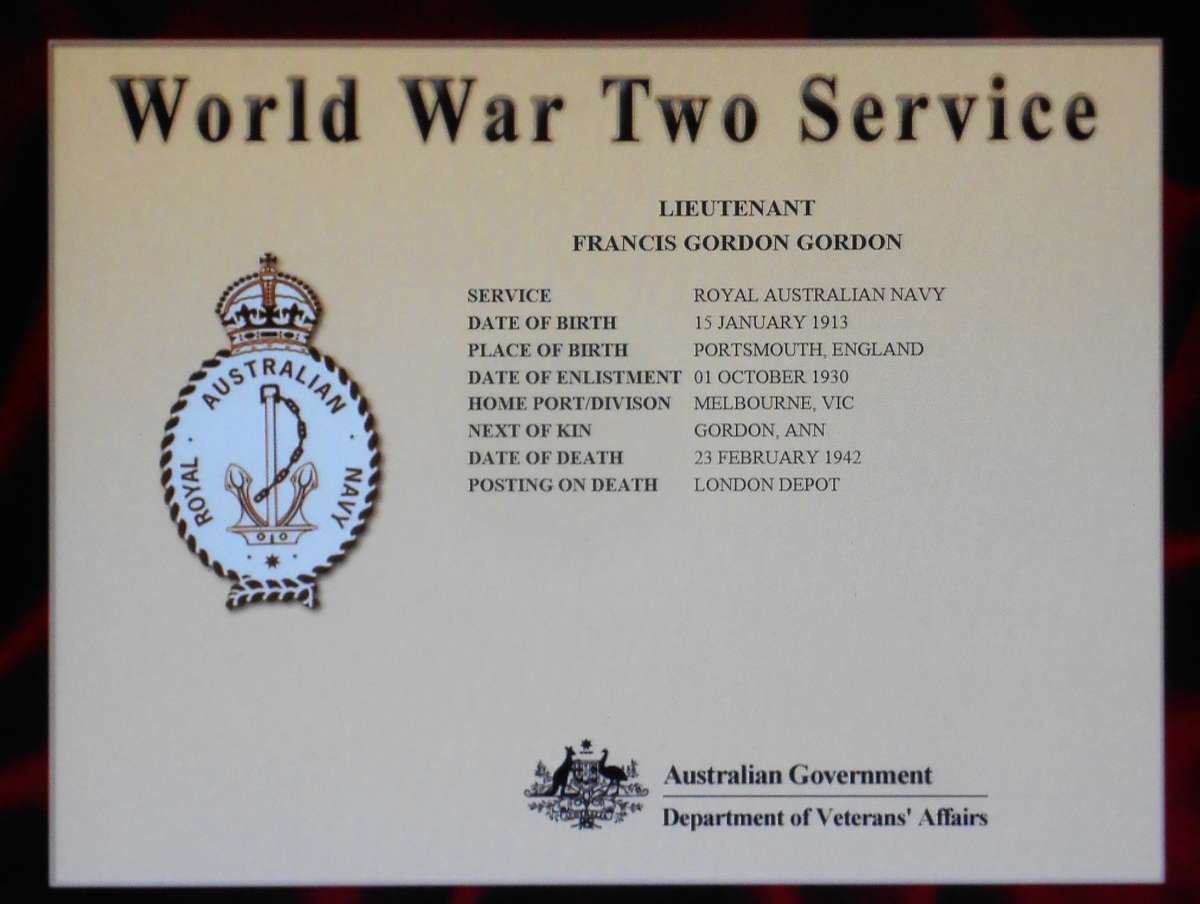