Anthony Hunten Hammond was born on 20 April 1945, at Bognor Regis, Sussex, UK. He enlisted in the Royal Australian Navy (RAN) in Melbourne on 10 August 1964 as a Recruit Midshipman (Aircrew), and was posted to HMAS Cerberus (FND) to the south of Melbourne, to begin his Recruit School Training and to be assessed for aircrew training.

Having completed his Recruit School Training, Hammond was directed to a Basic Aircrew Training Course, after which he was promoted to Midshipman. On 14 November 1964 he was drafted to HMAS Watson, a training base located on the South Head of Sydney Harbour, where he received further instruction in naval subjects.

On 8 January 1965 Hammond was posted to RAAF Point Cook near Melbourne, where after initial grading he joined the No.1 Basic Flying Training School (BFTS). Early instruction covered flight theory and aeronautical knowledge. He then moved to the Link Trainer followed by flying instruction in the Winjeel training aircraft. Having reached the necessary hours of solo flying in the Winjeel Hammond graduated from the BFTS on 12 September 1965.

His next move was to RAAF Pearce, the air force training base north of Perth, WA, where he joined the No 56 Advanced Flying Training School (AFTS). Arriving at Pearce in mid-September his training now focussed on conversion to jet aircraft, using the dual control de Havilland Vampire T-35 jet trainer aircraft. After his initial tuition with the guidance of an instructor he then began solo flying. The AFTS course was comprehensive with instrument flying, formation flying and other exercises – including night flying.

On 7 January 1966 Hammond resumed his training after taking Christmas leave. On 20 January 1966, he was briefed for his first solo night flying exercise. At about 2240 he took-off in Vampire A79-653 on runway 36 at Pearce and began a climb into the night sky. Shortly after departure he called crosswind leg but less than a minute later Air Traffic Control saw a fireball in the hills to the east of the airfield. Subsequent investigation revealed the aircraft had veered to the right and descended to strike the foothills of the Darling Ranges. Midshipman Anthony Hunten Hammond was killed instantly.

The accident was attributed to a misreading of the Attitude Indicator (AI), an instrument showing the aircraft’s position relative to the horizon. During take-off and climb the Vampire’s AI was known to show a precession error, which required the pilot to make a manual correction when flying on instruments at night or in poor visibility. If the correction was not made the aircraft would turn to the right and descend. 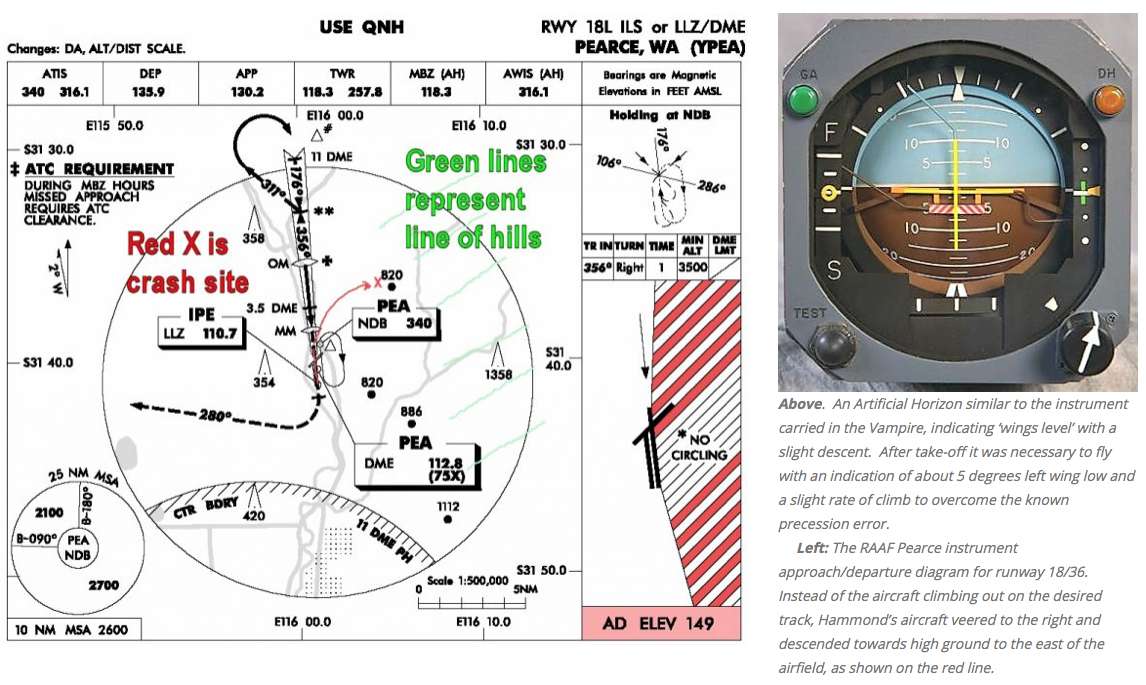 Below: Hammond’s RAN Officers’ Record of Service. His middle name, according to his Birth Certificate, was “Hunten”. This also appears in the Navy List of September 1965. Elsewhere, including on his Flying Course photograph, he appears to have used the middle initial “P” (for Patrick). It is not known where this came from.