Fireflies: Where Are They Now?

Very few of the Australian Fireflies remain in one piece.  Here are those that are known – please contact the Webmaster if you have any other advice.

Below: WD827  was sold to the Australian Air League in Blacktown in early November 1956, who parked it at their premises in Kildare Road Blacktown (see photo left).  It was transferred to the Moorabbin Air Museum (now the Australian National Aviation Museum) in May of 1973, where it was gradually refurbished to non-flying display standard.  It remains there until this day (Right photo Martin Edwards).  Further details of the refurbishment have been requested and will be posted here if received. 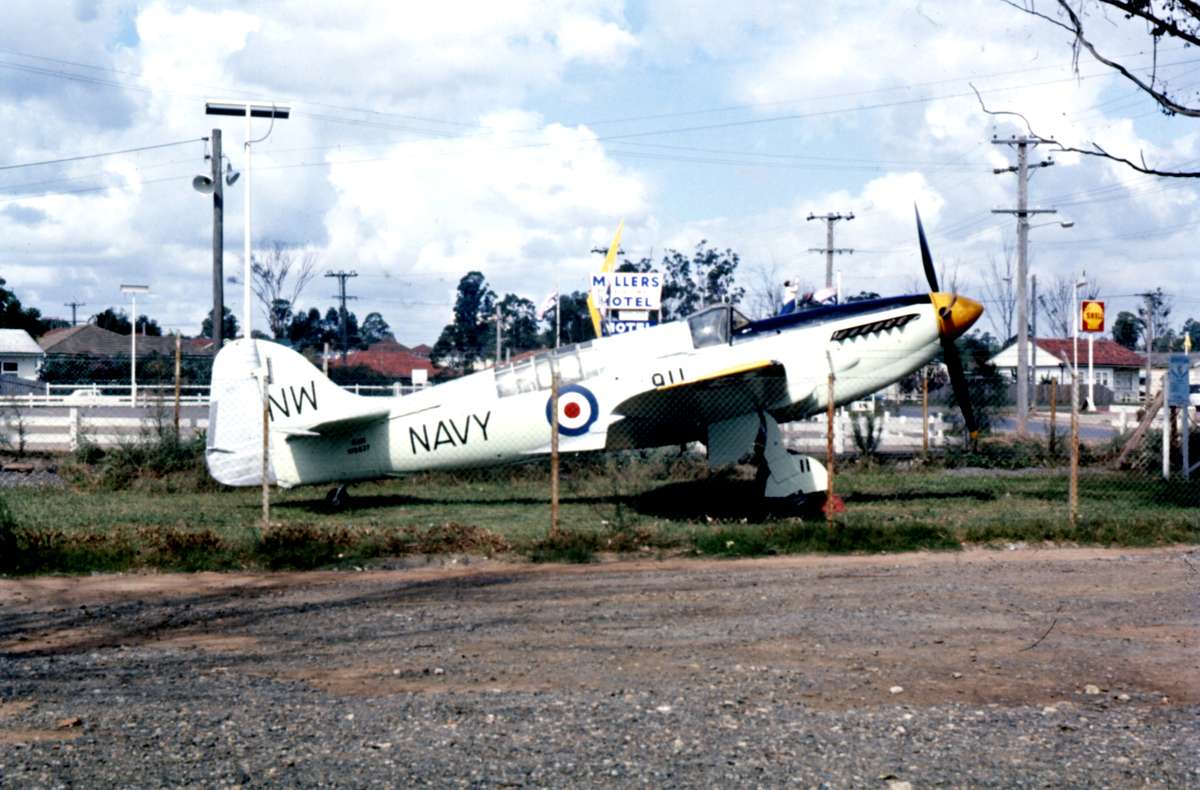 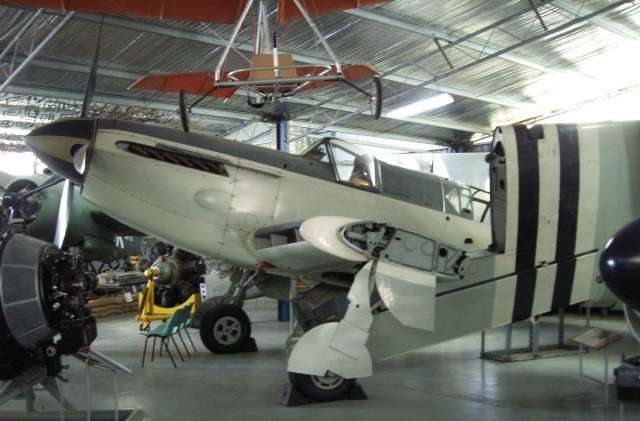 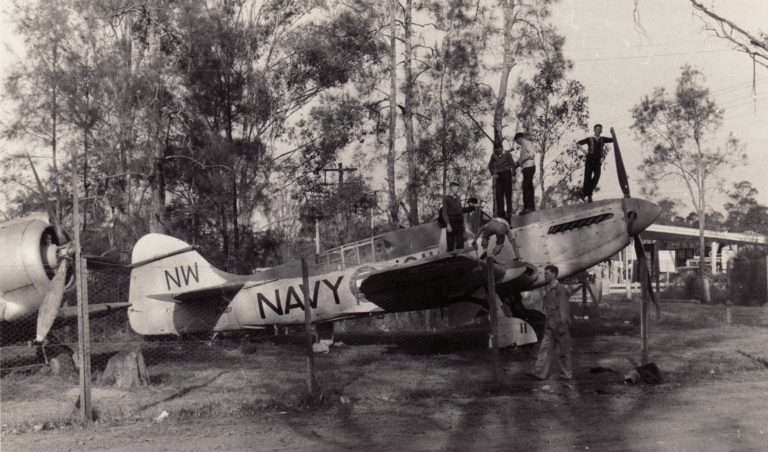 Left.  A later shot of WD827 parked at Blacktown. It was acquired from the Australian Air League for a straight swop for a single seat Vampire, and was transported to Point Cooke until it was trucked to the Museum in Moorabbin, where a couple of volunteers replaced perspex in the front cockpit, cleaned up the airframe and gave it a paint job.

At a later date another volunteer completely restored the pilot’s cockpit and the Observer’s station including new perspex over the latter. Incidentally, and on agreement, the serviceable radiators of WD827 were swapped for unserviceable units and taken to the Fleet Air Arm Museum at Nowra for attachment to a Firefly under restoration.

Below: WH632 arrived in Australia aboard HMAS Sydney in August 1953 and was placed in storage – perhaps as an attrition airframe that was never needed.  In June of 1969 it was sold to the Marrickville Air League in NSW who held it in open storage in a compound. The Canadian Warplane Heritage Museum bought the aircraft, together with a large number of spares, in June of 1978. See the remarkable story of its restoration here.   Below Left: Arriving in Halifax (photo Canadian Warplane Heritage Museum). Below Right. WH632 in flying condition. (Photo Kool Shots). 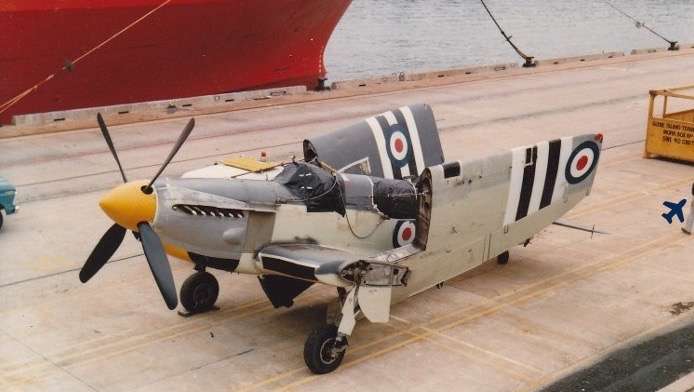 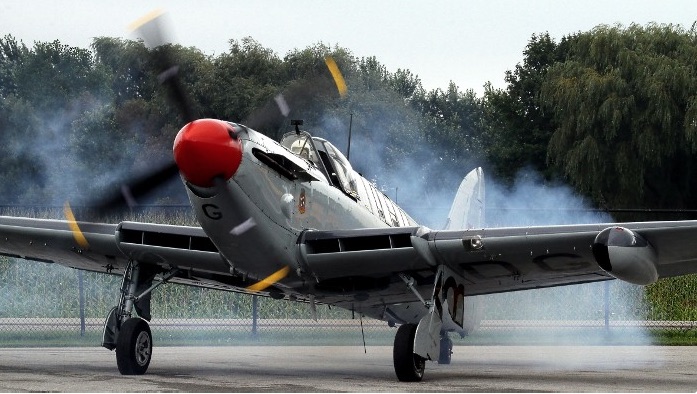 Click on image to the left to read of the remarkable restoration of WH632.

WJ109 (right) has been the FAA Museum static display aircraft since mid-1980‘s.  Previously was ALBATROSS Gate Guard alongside Sea Fury VW232, from circa 1967.  WJ109 was complete with operational engine when removed from Gate Guard duties and used as the Christmas Tree for the airworthy restoration of WD826.  At one stage (circa 1985) both aircraft were brought up to ground running and taxiing condition.  Having shed a lot of components to support the rebuild of WD826, WJ109 finally lost its engine to WD826 in 1987 when the engine from the latter was destroyed on a ground starting incident involving a Coffman cartridge starter without the correct overpressure “blow-off’ disc.   WJ109 spent many years parked in the open air and subject to weather during the construction phase of the AMOF hangar and deteriorated very badly. It was painted by British Aerospace as a favour in the early 1990‘s and another damaged engine block and propeller reduction gear was installed to enable fitment of the propeller.  Although the colour scheme, which it still wears, represents a Korean War-era aircraft with Invasion Stripes, WJ109 was a Mark 6 converted to Target Tug, and it never saw Korean service.  WJ109 is now allocated to go to the Australian War Memorial for permanent static display. At the time of publishing this (Jan19) it is in “J” hangar where it remains waiting collection by the AWM in May 2019. 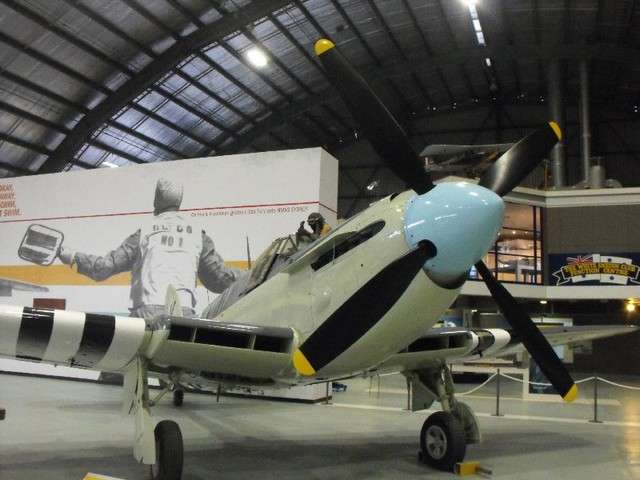 WD826  was transferred second-hand from the RN in 1953 and later (1958?) converted to Target Tug.  It operated at 723 Sqn and at Avalon, Victoria by contractors Brain and Brown to tow targets for the West Head Gunnery Range at HMAS CERBERUS. In 1966 it was flown to Bankstown for disposal but was then transferred to HMAS NIRIMBA as an apprentices training aid. In 1974 it was road transported back to ALBATROSS to form part of the “new” Fleet Air Arm Museum exhibits.  Its engine was made serviceable and was fired-up at the instant that VADM Vat Smith declared the museum OPEN. With the formation of the RAN Historic Flight WD826 underwent a strip, inspection, rebuild and repaint to make it airworthy. It flew for less than three years, and last appeared at the Australian Bi-Centennial Airshow at RAAF Richmond in 1988. The engine that had been swapped into it from WJ109 developed major internal coolant leaks, causing operations to be curtailed.  An engine rebuild and aircraft restoration was started in 1991, receiving various levels of funding and support over the intervening 25 years.  The engine was sent to the USA for rebuild, major hydraulic components were overhauled, wiring was upgraded, the propeller was overhauled and major structural repairs were carried out on the airframe.  It was repainted to represent the aircraft flown by the CO of 817 Squadron on the final deployment to HMAS SYDNEY in 1955-56.  With the disbanding and demise of the RAN Historic Flight, it was returned to the FAA Museum and is on permanent display as of December 2018.

Above: WJ109 in its display colours in the Fleet Air Arm Museum in Nowra. Below: WD826 (245/K) was brought to flying status in 1986 on the civil register as VH-NVU. The photo below is at an unknown location, but would have been taken prior to 1989 when engine problems prevented further flights. 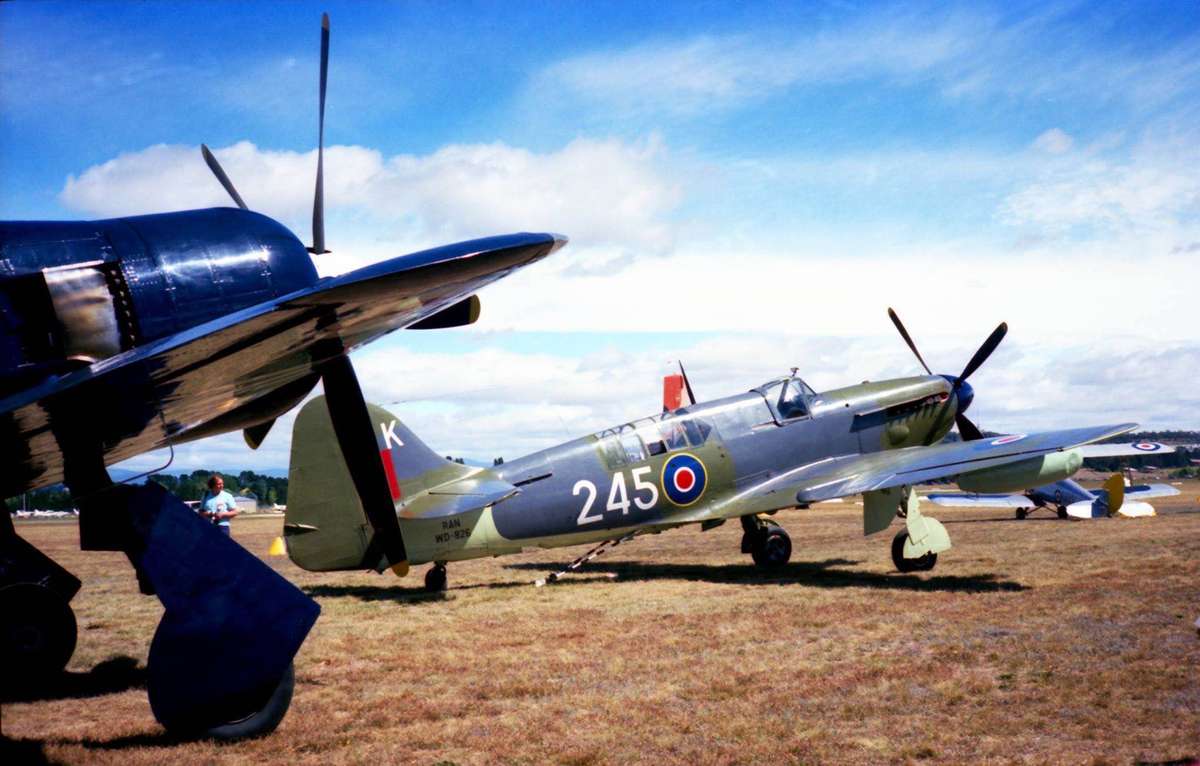 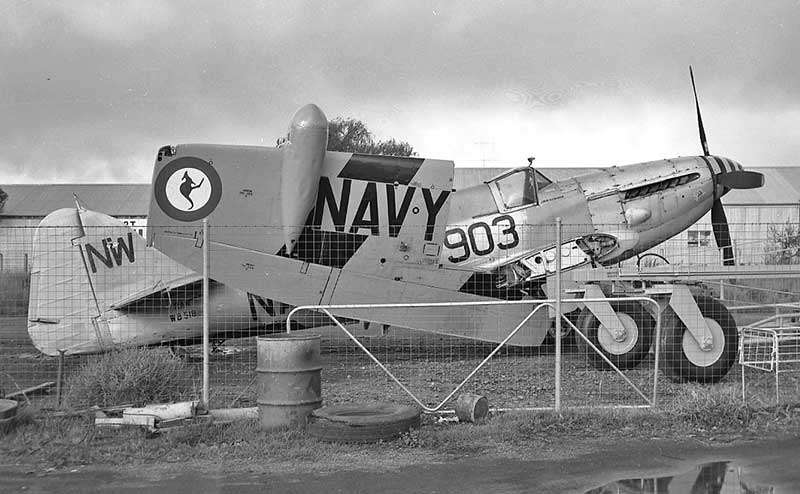 Above: Firefly TT.6 WB518 was issued to the Returned Services League at Griffith, NSW in February 1967 to be mounted on a pole as a memorial. It resides there to this day, although along the way it surrendered some of its components to help another Firefly keep flying (see story below).  In the above photograph it is parked in a Griffith trucking yard in July 1967 prior to being hoisted on to the pole. (Image Geoff Goodall). 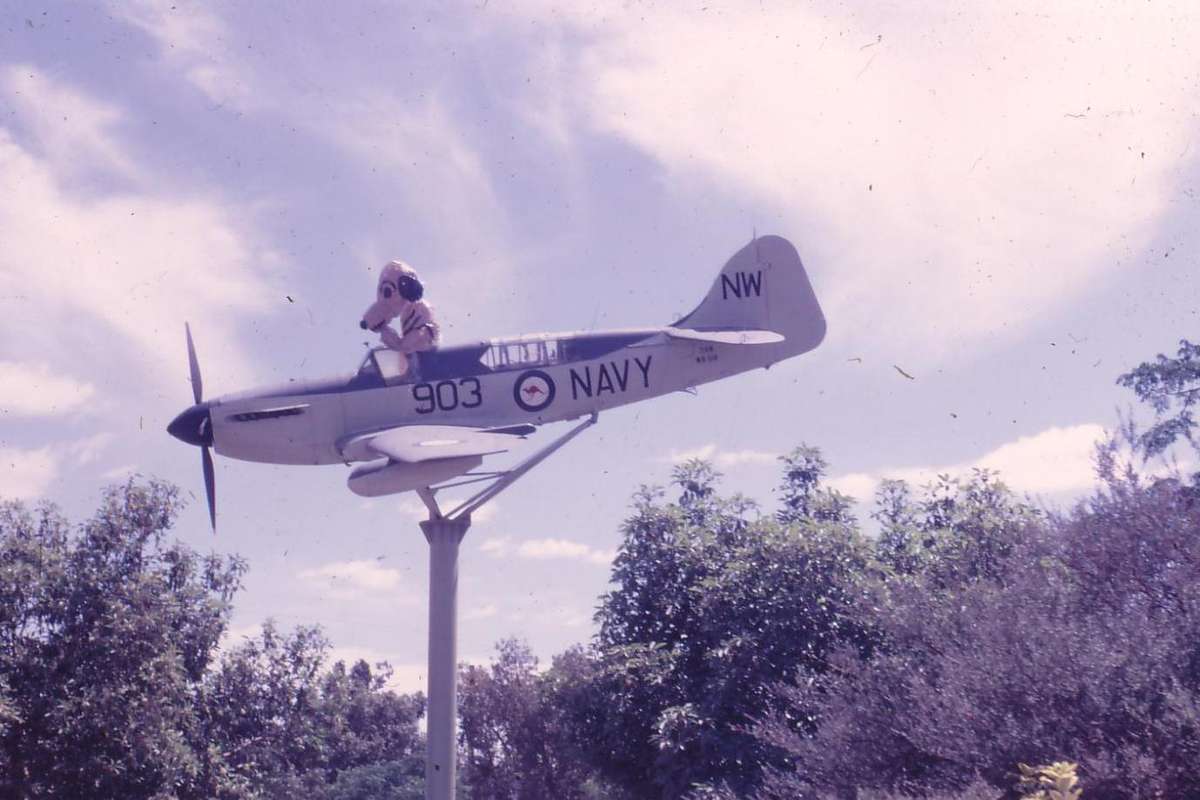 Left: WB518 survived the chopping block, although not in a particularly glamorous way.  After operational service it was converted to a Target Tug (TT6) circa 1958 and was operated by Bain & Brown Ltd. In 1966 it was sold to a private collector in Griffith, NSW and mounted on a pole at the Griffith RSL. In 1991 it was brought down and the forward fuselage used to repair damaged Firefly WD828 by the Classic Aviation Company in Bankstown. The forward (damaged) fuselage of 828 was incorporated back into WB518 which was then restored to its pole.  Of interest, the repaired WD828 is still flying in the US (see below), but the owner used the markings of WB518 as he considered it a more appropriate serial number.  In the photograph left (date and source unknown) some wag has strapped an inflatable Snoopy to the aircraft.

Right: WB518 in pristine flying condition, taken in Chino, California after a seven year restoration. (Photo: Steward L. Robotham).  You can read about this restoration here. 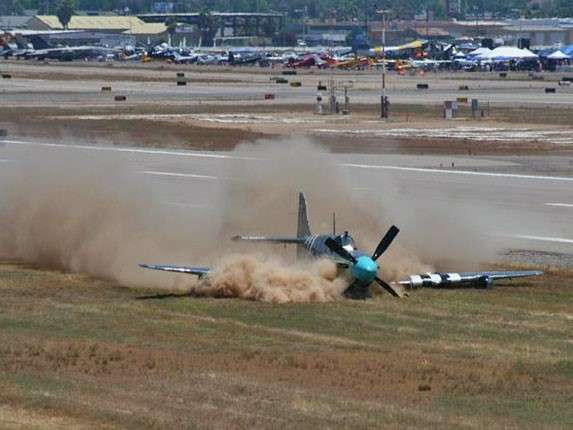 This aircraft was subsequently severely damaged when its undercarriage failed to lower at the 2012 Wings Over Gillespie airshow (see photo above – click to enlarge). It was subsequently rebuilt and rebadged as WB377, which was loaned to HMAS Sydney’s 817 Squadron during the Korean conflict. 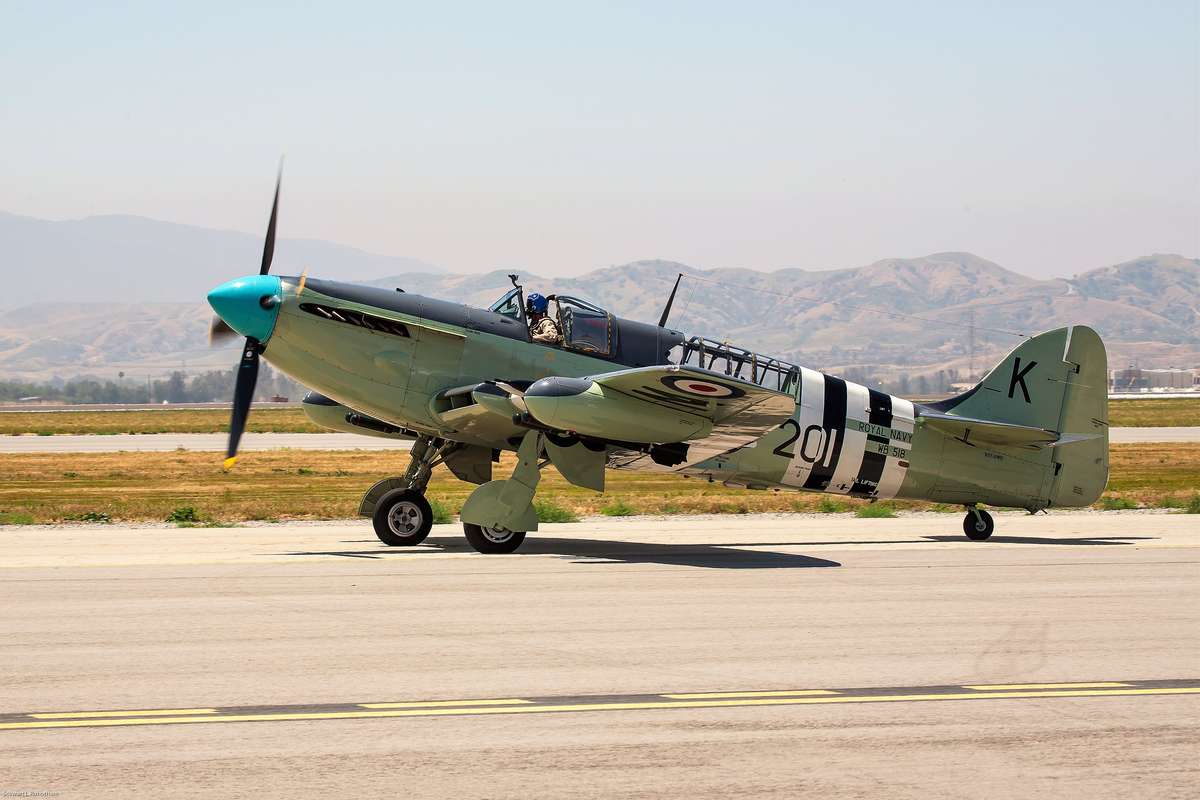 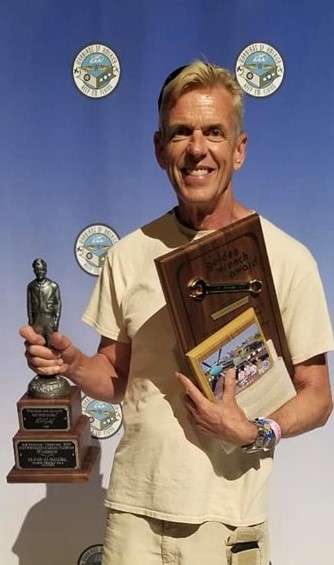 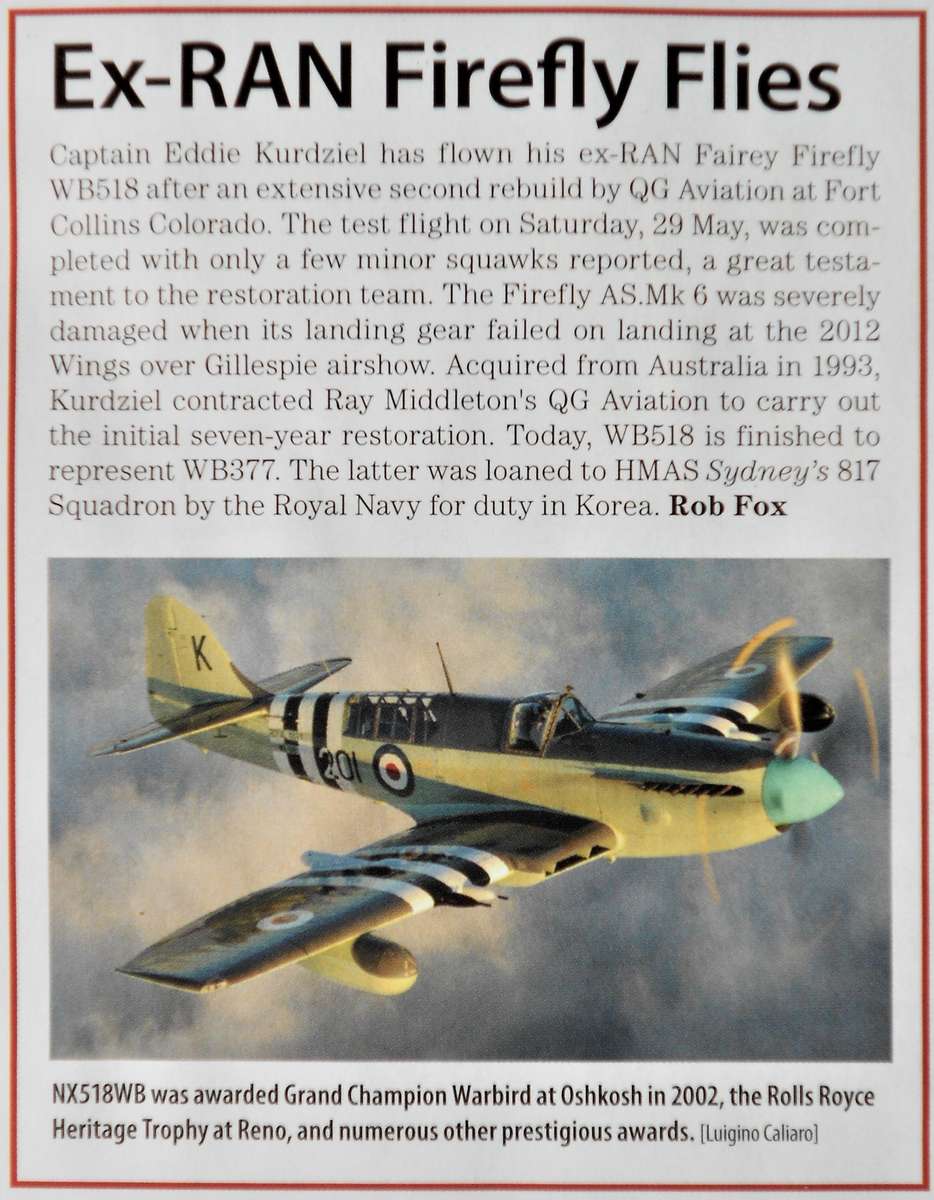 WD840 had, like most surviving Fireflies, a chequered history.  Disposed of in 1965 (reportedly for AU$640) it was overhauled the following year in Australia  before delivery to a private collector in Canada, sans engine, where it was registered as CF-CBH.  The owner fitted a bench seat for eight passengers and it was painted in civilian colours. From 1975 onwards it belonged to a series of owners in Massachusetts, Pennsylvania, Florida, Texas and Utah in the United States. During this period it was slowly being restored to its original Firefly XV configuration.  In 2012 Aeroplane Monthly reported that it had been sold to a new owner in Europe, and it was [then] under restoration at QG Aviation in Fort Collins, Colorado.  No further updates on this aircraft have been found.

Below:  WD840 in Canada, converted to carry eight passengers. 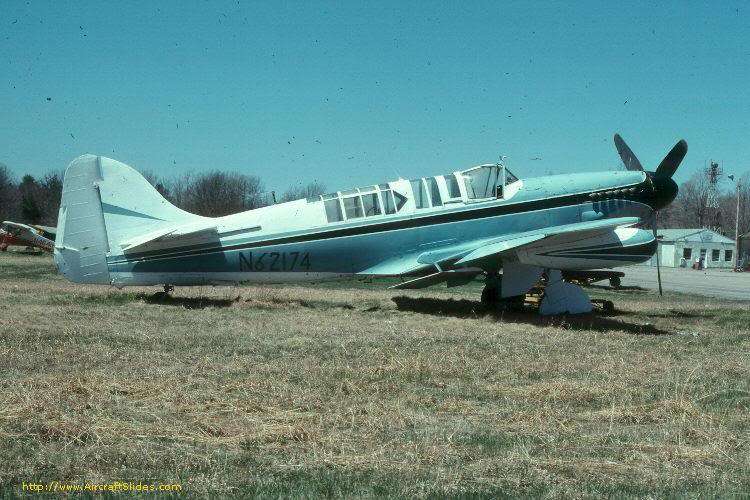 VX388 was sold to Historic Aircraft Preservation Society in the UK but was never delivered. It was later sold (reportedly for $502) to Mr Harold Thomas, Camden Airport. It is currently located at the Camden Museum of Aviation, which is a privately owned collection not open to the public.  See below:  Photos Ian McDonell (left) and Camden Aviation Museum (right). 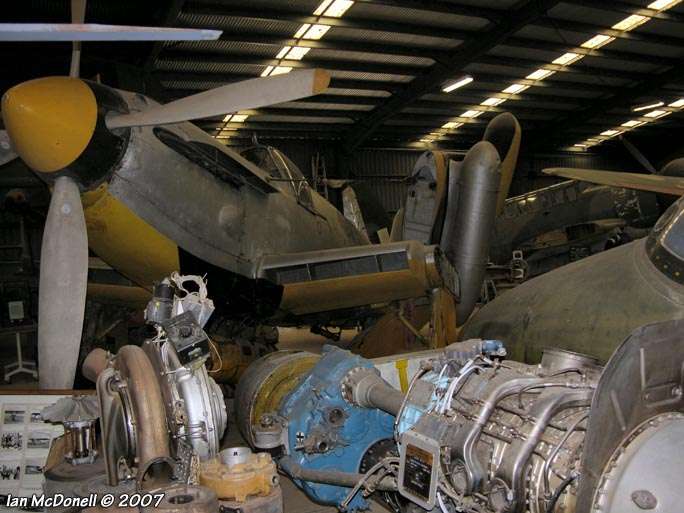 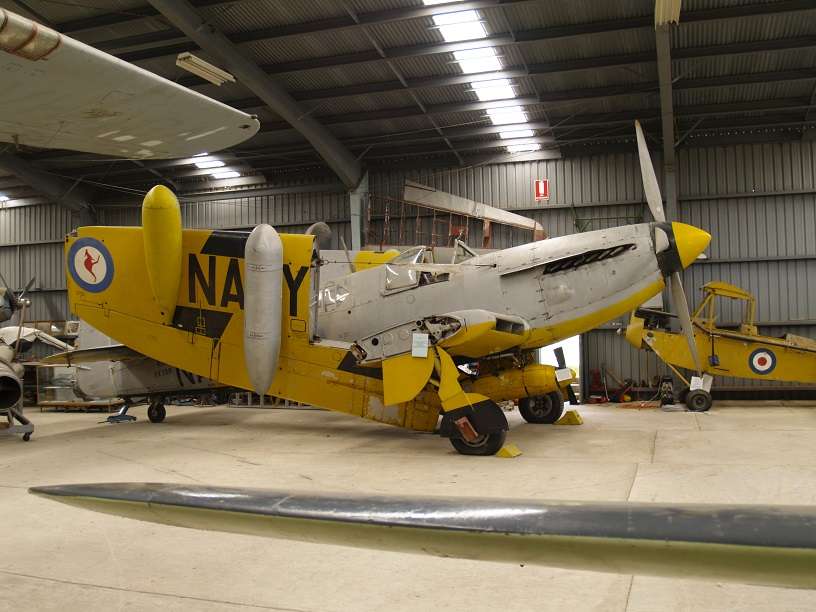 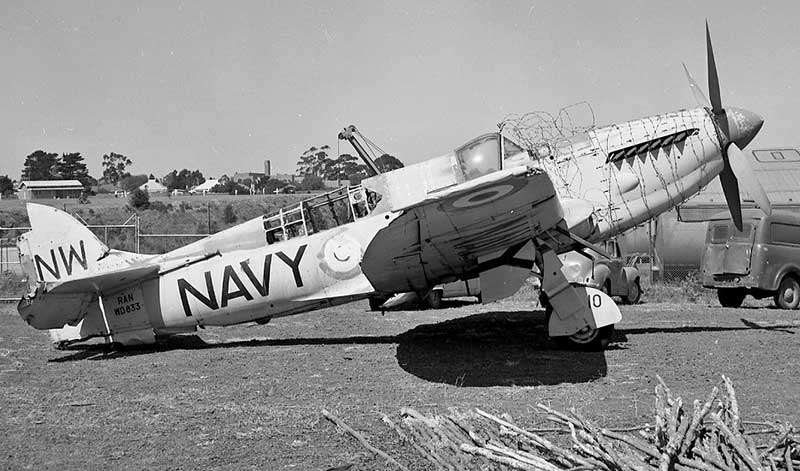 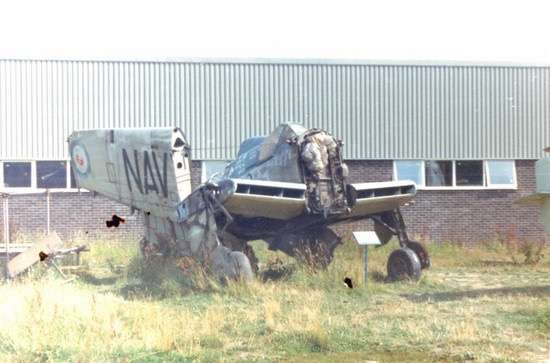 WD833 has a long history since being sold in 1960, including being reportedly seen at a car wreckers yard in the Melbourne suburb of Northcote in November 1967. (Left top. Photo. Geoff Goodall).  Later it was shipped to Scotland, where it rotted in a field from 1975 to 1981. (See Left bottom. Photo: Charles E. Mackay 1979).

The aircraft then made its way to the United States, where it was reported in 2010 as being under restoration by Len Parker in Nevada.  No further updates to its status can be found at this time.