Above: Nose oleo collapse on catapult, HMAS Melbourne 11Aug56.  The aircraft suffered minor damage and was repaired to survive until its retirement eleven years later.   Below: The Squadron Line Book entry of the incident, which in customary fashion was less than flattering.   (Image via Phil Thompson). 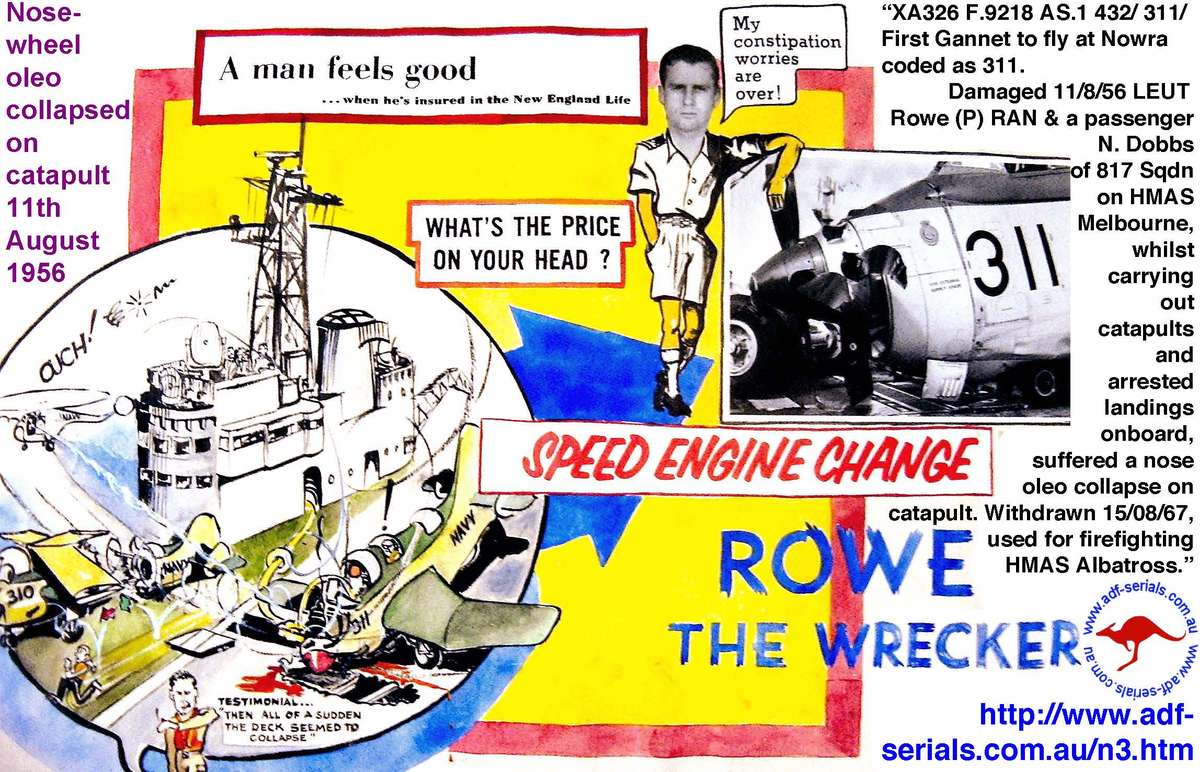 The incident is described on page 113 of  Zbigniew Patynowski’s book “Submarine Hunter” as follows:

On this occasion, when the hose wheels struck the rear edge of the hold-back plate, the nose gear down-lock pin was sheared, allowing the nose gear to retract with disastrous results!  Both props struck the steel deck at high rpm, shattering into many pieces, large and small, including several whole or near whole blades – one of which narrowly missed the rescue helicopter which was stationed for launch operations just off the port bow! There were several minor casualties amongst the catapult crew from the flying shrapnel.

The outcome of this incident was a redesigning of the hold-back plate to a tilting plate, pivoted about the centre.  This allowed the plate to be tilted back to form a ramp for the nose wheels to taxi up, and then tilt down when the wheels went over the centre and down the other side.”

HMAS Melbourne’s ROP for the month of August reported:

“During the afternoon, the nose oleo of a Gannet collapsed while the aircraft was being loaded onto the catapult. The aircrews were shattered and the flying pieces severely damaged a second Gannet in the deck part, and narrowly missed the plane guard helicopter which was hovering off the starboard bow. Happily these fragments caused only minor injuries to several members of the catapult crew. Damage to the catapult tie down loading chocks was quickly repaired by strenuous efforts of the ship’s staff. The incident has been fully reported in other papers.”

Above and Below.  Further shots of the aircraft.  In the lower image the ship’s crane is being fetched to move the aircraft. (Images via Kevin Duffey)

Below: Close up of the damage.  Photo via Jeff Chartier.