Above: One of the few available photographs of XV796 before she was lost on 24 February 1966.  The plane guard Wessex in the background was to have its own tragic accident some 15 years later.  (Defence Image via Jock Hetherington)

10/01/1964 Badged as 815. LEUT(P) Peter Adams RAN, LEUT (O) Graham Pring-Shambler and SBLT (O) Peter Coulson made a wheels up landing on the bomb bay doors at NAS Nowra,HMAS Albatross, when the undercarriage would not come down.  Aircraft was repaired and returned to Service, most probably with the side number 858.  This accident has been incorrectly attributed to XG795 in other records, but photographic evidence, together with statements from the Squadron Air Engineering Officer, Pilot and one of the two Observers is compelling.

Crashed 24/02/66 as 858. Lt(P) Fyfe RAN whilst carrying out his first night deck arrested landing on HMAS Melbourne. Pilot took his wave off too late, catching six and coming to a stop hanging over the port side by the wire. Crew rescued uninjured. Aircraft fell into the sea during subsequent attempt to lift it onboard.

Above: Fire in the Hold!  We thought this was a fire caused by a starter cartridge malfunction, but it was actually more significant than that. LCDR ‘Toz’ Dadswell (P) and LEUT Gordon Turner (O) were tasked with a rocketing display for a families day aboard HMAS Melbourne.  On attempting to start the port engine Dadswell suffered a cartridge malfunction, which was not unusual.  He got the starboard engine started but was then surprised to see his Observer standing on the deck waving his arms wildly, and a fire crew approaching the aircraft indicating he should shut down the running engine. On doing so, a wall of flame surged over the cockpit, so Dadswell made a quick exit from the aircraft.  The fire crew smothered the fire with foam.
It transpired that the Naval Airman who had loaded the starter cartridges had failed to properly secure the cap on the cartridge chamber. When the cartridge was fired it blew the heavy cap into the oil tank on top of the engine.  The starboard cartridge then ignited the six litres of oil, but while the engine was running the flames were pushed under the aircraft before curling up over the trailing edge of the mainplane.  This attracted LEUT Turner’s attention who decided to make a hasty exit.
Damage to XG796 was extensive and the aircraft was craned ashore for major repairs. Unfortunately, on flying back to Nowra the undercarriage failed to lower, requiring the pilot (LEUT Peter Adams) to land wheels-up – necessitating another period of repair (see below).  Some time later the same aircraft made headlines by plunging over the side of the ship to hang suspended.  It subsequently fell to a watery grave (foot of this page).  (Thanks to Toz Dadswell for details on this incident).

Above and Right:
Belly up landing in January 1964.  The accident was caused by a stress fracture failure of the nose wheel door actuator lug. The lug failure prevented the nose wheel doors from opening and resulted in the landing gear sequence valve remaining closed, and therefore the ‘non-activation of all remaining landing gear sequence operations.  Structural damage to the aircraft was limited due to the torpedo/ bomb bay doors opened by the pilot prior to the landing, and the undoubted skill of the pilot LEUT Pete Adams.   The aircraft was fully repaired and returned to service, most probably rebadged as side number 858.

Of the accident, Adams subsequently wrote:

“I was the driver on the day when a mechanical problem in the nose Wheel bay prevented the u/c being lowered. The landing was made on Runway 08 at about 1130 Friday 10 Jan 64.

Behind me in the middle seat was Alan Pring-Shambler and down the back looking back was Peter Coulson, a fairly new arrival on the Squadron (816). If my memory serves me well,somewhere along the way Peter became disconnected from the intercom and may have been unaware of what was to come, however, it didn’t slow him down as by the time I was scrambling out of my cockpit the ‘lookers’ were already at the runway edge.

If some wonder why both props/engines were damaged and one not shut down prior to landing: a feature of the u/c system was that the prop flight fine pitch locks could not be withdrawn to allow the engines to constant speed with the u/c up – to prevent controlproblems in normal flight. Accordingly the power response with the locks in at circuit speed was very poor. I tried an approach with one shut down and found the handling less than desirable so opted for both engines.”

Note.  This accident has, in some records, been incorrectly attributed to XG795.  The Fleet Air Arm Association of Australia has carefully examined available records and has found that this was not the case.  The accident occurred to XG796 on the specified date and flown by the crew recorded above. This conclusion was reached by examining photographs of the accident, in which the serial number XG796 is clearly visible, and by statements of the AEO, John Selby (dec)(written in 2003); Peter Adams, who was the pilot on the day, and Peter Coulson who was in the rear cockpit.  There is absolutely no evidence available to suggest that XG795 was involved in any other belly up landing.

Below:  Accident aboard HMAS Melbourne
24 February 1966 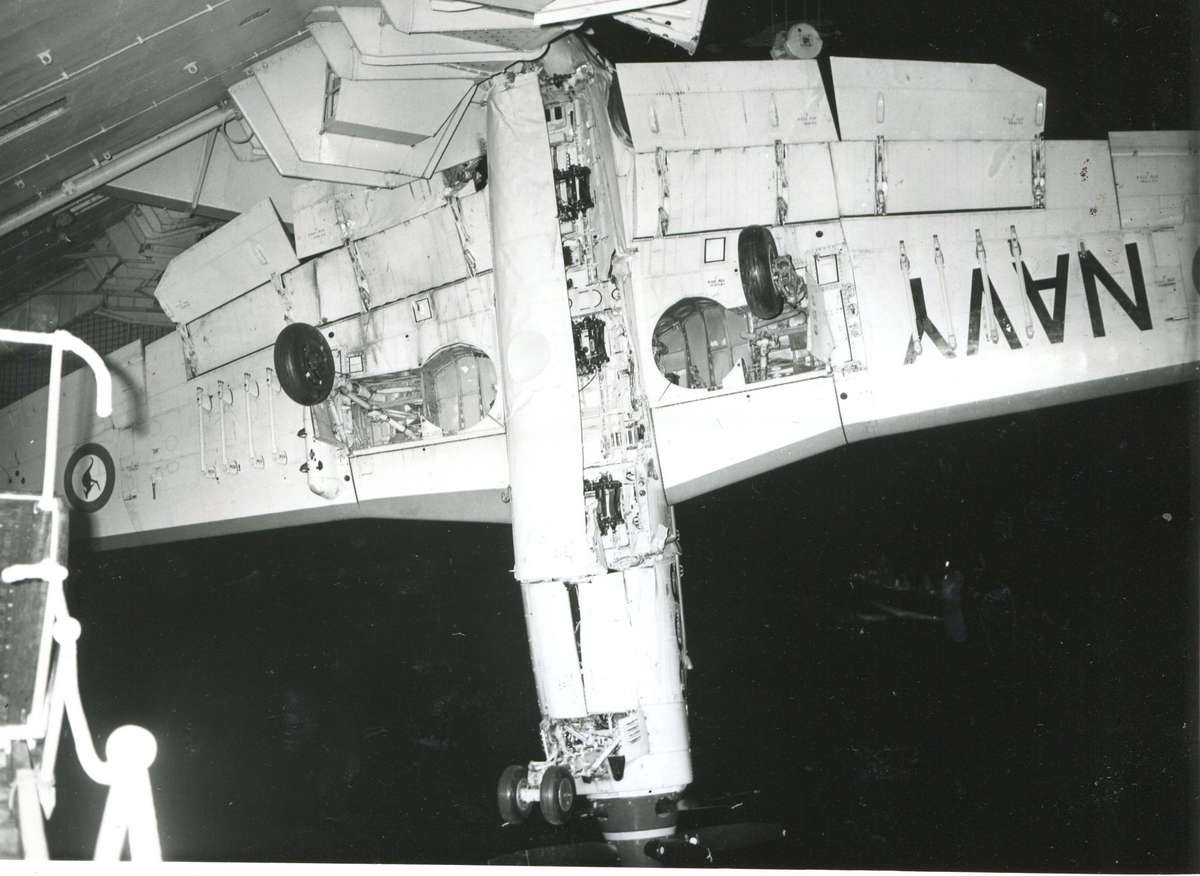 “My tenth and final encounter with XG796 was on the night of 24 February 1966 when we launched from Melbourne for a sortie that was to conclude with ‘Albie’ Fyfe’s (Albert John Fyfe) night deck landing qualification. The weather was closing in and after a few touch and goes Albie was given down hook for his first night arrest. As we crossed the round down Albie thought the ship was turning and initiated a last minute wave off. This was in the era of no Landing Signals Officers!

However, as we rotated XG796 engaged number 6 wire, with the result that the aircraft went over the port side of the flight deck. The aircraft came to a precarious stop suspended by a combination of the hook, arrester wire and the aircraft being partially embedded in a sponson below the flight deck. As Melbourne came to a stop, the aircraft moved slightly but remained suspended, pointing vertically towards the water. This was very different to 1964 as it was not pre-planned or covered in our very slender SOP’s or Pilots notes.

We communicated briefly with the ship and between ourselves before I asked ‘Albie’ to turn off the electrical system, as I was soaked in fuel from the main fuel tank. A decision was made to abandon the aircraft before any attempt would be made to recover the aircraft. The rear aircrew-man, Tom Lindsay, was recovered back on to the flight deck with the aid of a length of line. ‘Albie’ and I were in a slightly more difficult situation, as we were inaccessible from the flight deck.

We were also hanging in our harnesses and did not wish to upset the delicate balance of the aircraft by jettisoning our canopies. By carefully easing out the safety harness straps I was eventually able to gain a foothold and release my safety and parachute straps. I was then able to force my canopy open until it locked in the open position. This allowed me to ease myself out of the cockpit and to perch on the edge while ‘Albie’ did the same some six feet below.

An attempt was made to reach us using the flight deck crane but this was not possible and we elected to jump into the water. Fortunately, the double [aircraft] propellers had stopped ina perfect cross giving a relatively clear arc to jump through. To avoid hitting each other, ‘Albie’ jumped first and when he was clear I followed. We then swam to the sea boat, which was waiting clear of the aircraft, and we were recovered on board and taken to the sick bay and kept there overnight for observation and many beers.

While I did not directly observe it, an attempt was then made to recover the aircraft. The flight deck crane was attached to the aircraft lifting point but when this point was put under load in a direction of almost ninety degrees from its design load it pulled out. This was enough to disturb the balance of the aircraft and it fell into the sea and XG796 sank very quickly and never made another attempt on my life.

‘Albie’ and I finally completed his night qualification in April of that year and [we] continued to fly together regularly until the end of the Gannet era. In fact we led the last flight of four Gannets the Air Day on 8 October 1967. By then I had flown 550 Gannet sorties for a total of 640 hours. The majority embarked, and certainly had more experience than on the day that I first met XG796.”

Above Left.  After jumping from the suspended aircraft into the sea, LEUTs Peter Coulson and Alby Fyfe, the Observer and Pilot of Gannet XG796 respectively, were picked up by boat.  Tom Lindsay, the aircrewman, had already been recovered aboard. (Image Peter Coulson, via Phil Thompson).   Above Right:  Peter and Alby (Image via Phil Thompson)

Below.  Other photographs of the aircraft and its attempted recovery, which was unsuccessful. In the first image of the sequence, which has been rotated 90 degrees for clarity,  the strop from the ships’ crane can be seen affixed to the aircraft lifting point. When the weight of the aircraft was taken, however, the strong point failed as the forces upon it were at right angles to the plane in which it was designed to work.  This photo was taken at the moment of failure – you can see the distortion about the lifting point as it tore out of the aircraft. (RAN image). 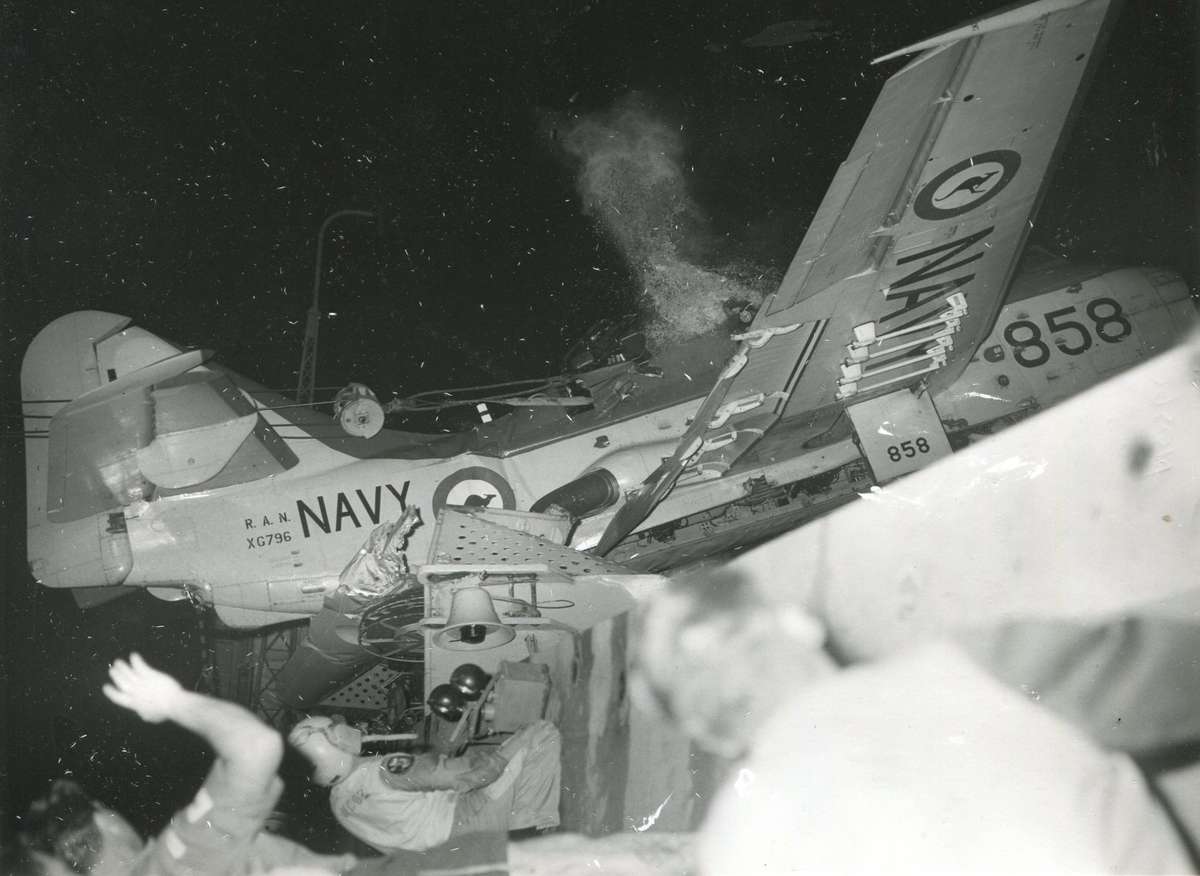 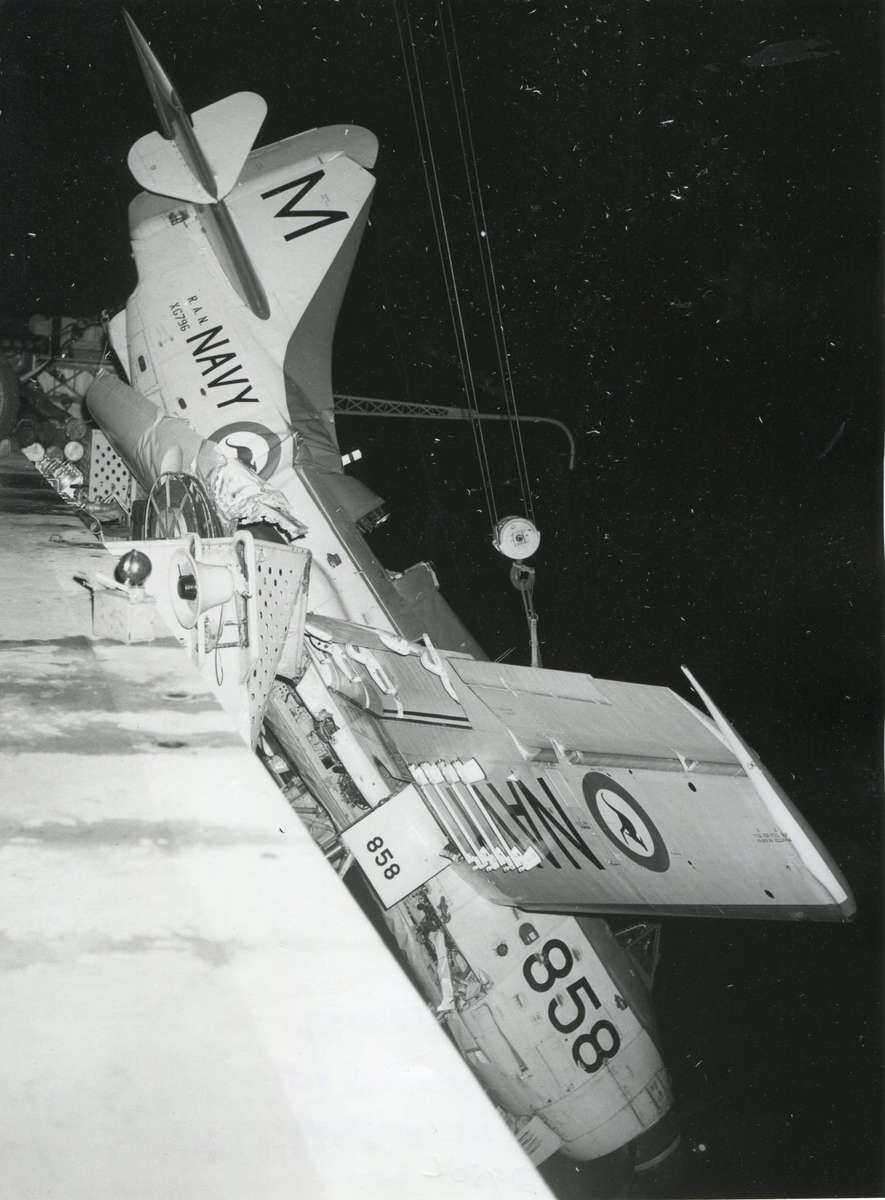 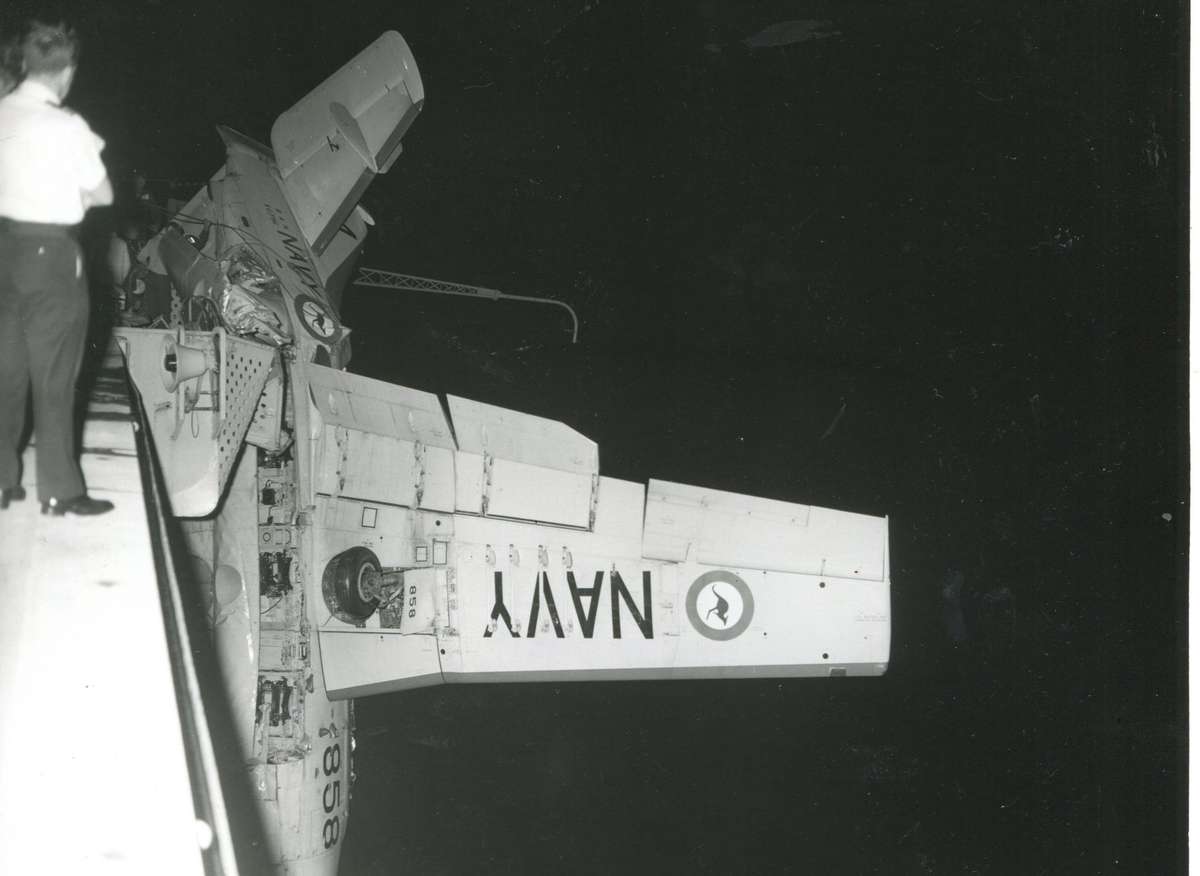 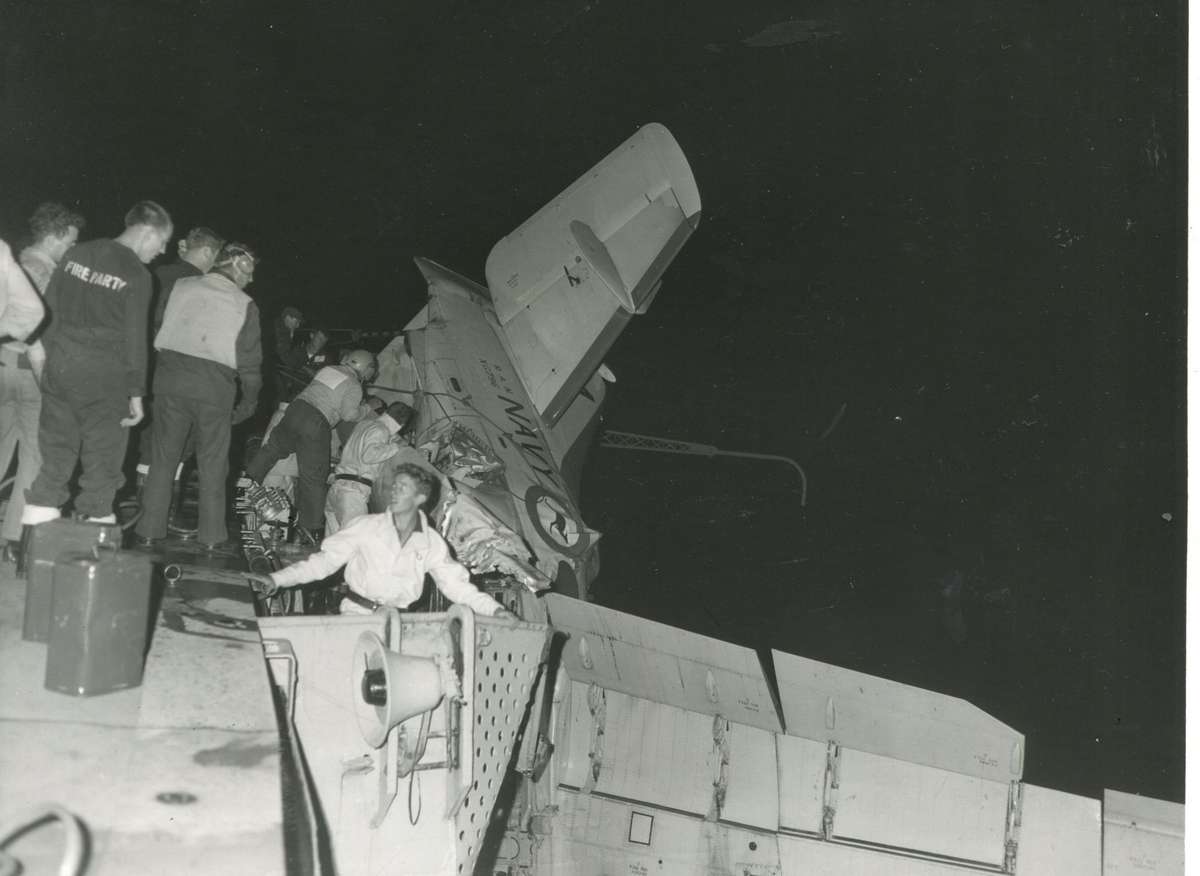 Extract from Accident Report (A25)