Did you fly or maintain the Tracker?

These memories are part of our heritage and we should capture them whilst we can.  If you can help – even  a little bit – please let the webmaster know using the ‘Contact Us’ form at the foot of this page Charles Schoch was a Navy diver and helped to recover the crew of Tracker 153608 which ditched off Melbourne on the night of 10 February 1975.   He recently sent an email recounting his role in the incident:

“…Parramatta was RESDES that night , the exercise was ﬁnished and Melbourne was recovering aircraft. I think it was about 2330 when we got the signal that an aircraft was in the water and to retrieve the crew.  I had to lay out lines and drop guard rails and be ready to get in as soon as we found the crew. When we had them sighted and alongside I jumped in and swam a line around so they had something to hang onto other than me. I think Barry had a broken leg as two of the men were telling me to get him ﬁrst. All good except I did not know who Barry was. There were only four people in the water including me and I did not leave anyone behind. I towed them about 20 metres to the ship and got them into slings to be hoisted onboard. Happy that it was a successful retrieval I grabbed an escape hatch from the aircraft that was ﬂoating nearby as a souvenir. That disappeared before I got back onboard. Two things I remember were , none of the men in the water said thanks but in the circumstance I can understand that. The other was that the Buffer got the commendation for the successful outcome. That’s how the Navy works I guess.”

(By Ed.  There were four crew members: LEUT Barry Bromfield (TACCO); SBLT Greg Rulfs (Pilot); SBLT David Palmer, and POA Joe Kroeger.  All were recovered into a Seaboat without injury).

NATOPS FLIGHT MANUAL
We have the full NATOPS Flight Manual for the S2 Tracker but it is a large file [82MB, 752 pages] so is not directly downloadable from this site. If you wish to obtain a copy please use the ‘Contact Us’ form below and we will send you a Dropbox link.

For what it’s worth, I thought I’d share some memories of embarked tracker ops in Melbourne’s last cruise Mar to Jul 1981.

I’d been lucky enough to get the last pilots appointment to VS816 (pier head jump) just before we embarked for a mother’s last deployment “up top”. A memorable Squadron environment famous for having, if memory serves, 14 Sub lieutenant aircrew, 4 lieutenants and only 3 Lieutenant Commanders under boss Terry Ford. Perhaps a bit low on experience you might imagine, but bags of enthusiasm and plenty of social. Just Trackers and Wessex Pedro on this cruise; the penultimate deployment for Melbourne.

Deck quals for all us new nuggets had taken place over the preceding 9 months, but still plenty of experience yet to be gained, most notably night quals. The older blokes told plenty of dits about the horrors of night deck ops, but as it turned out it was a doddle! Steady deck, prayers answered with a sweet night flyers moon providing all the horizon you could ask for, and the only distraction was the flare of the boss lighting a cigarette in the right hand seat as we turned base. So 2 trips with a grown up in in the RHS under benign conditions and I was night qualed. Easy work!

So come 26 Mar, I launched with SOBS (in 844 – will she ever fly again?) for 3 hours of low level manoeuvres with DLP on recovery. First thing I noticed was the deck motion as we manned up. Soon after the cloud cover extinguished the moon; as black as only embarked Navy pilots can know it, and so I found myself in an environment outside my experience.

Already fatigued, we commenced recovery, with Larry Mills intoning “decks pitching”. I couldn’t help but notice the other aircraft in the Charlie pattern consistently waving off or bolting.

Now my turn. First pass managed a decent touch and go. Second pass my first ever bolter. That was scary enough. Calls off “10º attitude and “power” ringing in my ears kept me out of the water. 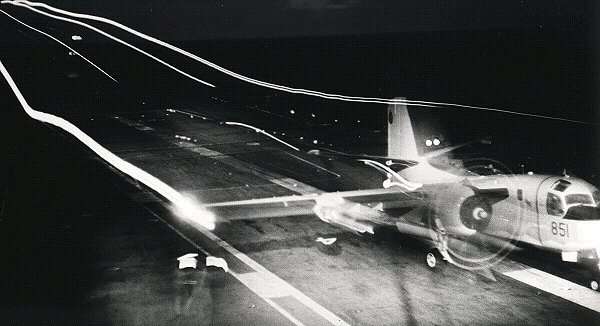 Third pass was a horror. Can’t remember much other that the ball and all centreline lights abruptly disappeared and Larry called a wave off, backed up by a bright red glow from somewhere near the mirror. Time for some coaching from the LSO. “When I waved you off I was looking DOWN on you! Do that again and you’re bingo.” Great.

Confidence duly bolstered, I asked the tacco for any advice. With eyes larger that saucers he informed me he hadn’t night flown for 5 years, and promptly ziplipped. Feeling quite alone now, as I rolled out in the groove, I started counting the children of my crewmembers, and felt so much better to know how many young lives depended on me.

This was a sweet approach now though. Rails pass. Got it nailed. In close, just had to pull the eye focus in to check the ASI for 95knots. On speed; fine, look out through the windscreen again – and the ship had disappeared! Some lights showed down under my left elbow through the bottom of the port bulging side window. To Wave off now would take out the island. So – idle, full left aileron, lots of rudder, close eyes and full backstick.

I think it was a taxy1 wire. We looked at the hook deck marks the next morning, and mine was 12 feet right of centreline, dragging left. Just as well, as we only had 8ft wingtip clearance on the island if on the centreline. I couldn’t see the deck edge as we pulled up. Port prop was definitely over the ‘oggin. Take a later wire and the port wheel would be over the edge.

Marshaller out immediately (how slick were those boys!), waving me forward to the cat for another launch. Just as I was having second thoughts, Flyco drawled, mercifully, “now we’ve got you, think we’ll keep you. Shutdown, fold sh@t spot”

Toughest night I ever knew. Turns out mine wasn’t the worst pass that night either! The great thing about a small ship with a tiny air group was that you could identify your hookmark the next day. That chip on the round-down 80’ short of 1 wire definitely wasn’t mine!

Well, I could go on about the cat failure on my 21st birthday, and bore you ad-infinitum, but that’ll have to wait for another dit session.

Absolute privilege to have done it and lived to tell the tale. Thinking of mates and those brave colleagues who went before who weren’t so lucky. RIP.