Our Heritage: The Hawker Sea Fury

Related Our Heritage: The Hawker Sea Fury Articles
Back to Heritage Index 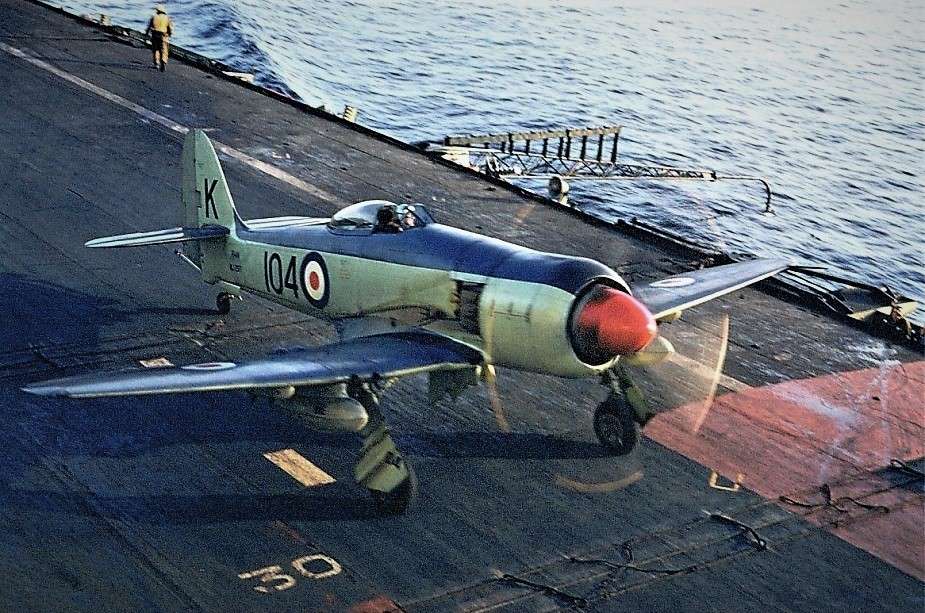 Loved by those that flew and maintained her, the Hawker FB11 Sea Fury was amongst the very first aircraft of the brand new Fleet Air Arm, and filled the gap between the bi-planes of a time just past, and the jets poised for future service.

She only served for a few years, but the Sea Fury fought in our only shooting war thus far, and did so with distinction.  She was a thoroughbred classic, as Kim Dunstan explains.

The Hawker Sea Fury was one of the outstanding piston-engine aircraft of naval aviation. Ordered by the British Air Ministry in 1942, it was designed by Sydney Camm to meet RAF specifications, with a naval version ordered in 1943. Named ‘Fury’ and ‘Sea Fury’ they were a lively, more agile derivative of the Hawker Tempest. By October 1945 several prototypes using different engines had been tested. However, with WW2 ending, and the focus on jet aircraft, the RAF cancelled its order. As the Royal Navy FAA realised its potential – and needed to replace its obsolete and Lend-Lease aircraft – the Sea Fury went into production in March 1947.

Following trials in 1946 on HMS Victorious, the Hawker Sea Fury 10 entered RN service in August 1947, followed by the Mk11 FB, which became the front-line RN FAA fighter-bomber, until replaced by the Sea Hawk in 1953.  Designed as a day-time fighter the Mk 11 was found to be a superb fighter-bomber and weapons platform. Popular with pilots and maintainers, more than 850 Sea Furies were built – including variants and two-seater trainers. International sales went to the Australian, Canadian and Netherlands navies; with land-based types to Pakistan, Burma, Egypt, West Germany, Burma, Cuba, and Iraq. Both the RN and RAN operated Sea Furies during the Korean War with considerable success. Produced at the start of the jet-age the Sea Fury proved to be a worthy competitor – much admired by those who flew them. 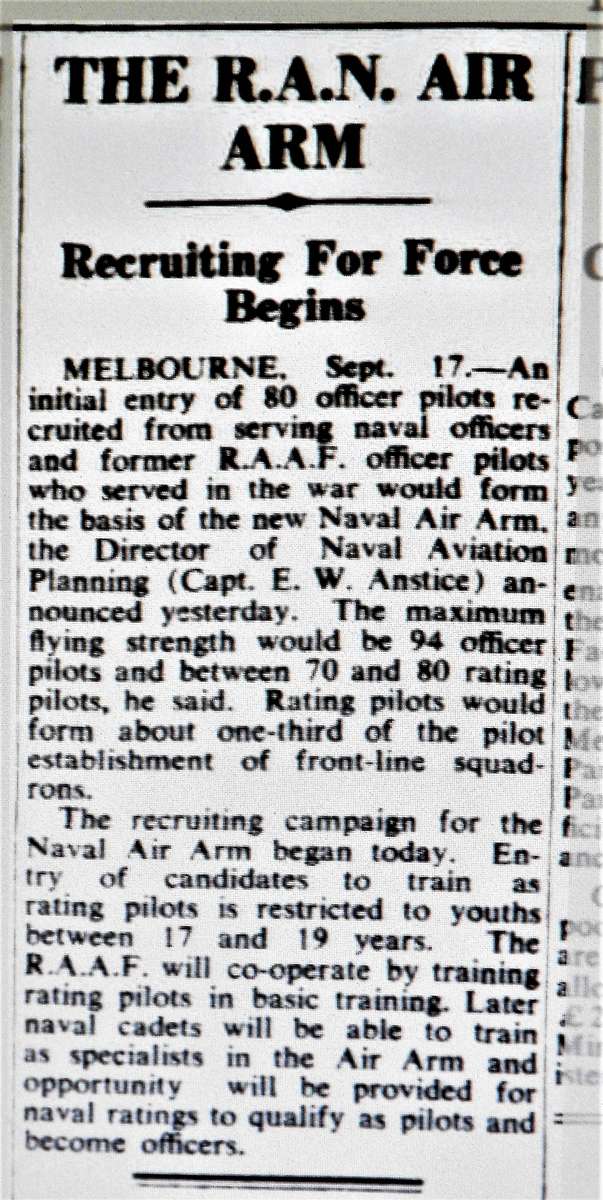 “The West Australian” 18 September 1947, which was the first announcement seeking people for the new FA.

In 1947 the Australian government approved the purchase of two light-fleet carriers and the formation of a Fleet Air Arm, with three air groups, and two air-bases. Seeking advice from British Admiralty on suitable aircraft types and training for aircrews and maintainers, the Admiralty recommended the same aircraft types used by the RN – the Hawker Sea Fury and Fairey Firefly – with training available at special Royal Navy Fleet Air Arm schools in the UK, at a cost.

This new arm of the RAN was well-timed, as several RAN officers had qualified as aircrew, and ex-RAAF, ex-RN, ex-RNZN, and RNZAF aircrew were keen to join, as were some ex-RN maintainers, together with numerous RAN sailors eager to transfer to the Fleet Air Arm. In 1947 senior Naval Air Planning staff, based in Melbourne, had begun assembling personnel to train as aircrew, initially at RAAF Point Cook to ‘wings standard,’ and sailors (including civilian recruits) converting to mechanics and maintenance trades – with all groups moving to the UK in 1948.

While the manning and training programs were progressing the first of the two aircraft carriers, (the former HMS Terrible, launched in 1944 but unfinished) was being prepared for delivery in 1948 as HMAS Sydney. The second carrier, HMAS Melbourne, was delayed while being modified and fitted with an angle deck. During 1948 the focus was on assembling the crew for HMAS Sydney and forming the 20th and 21st CAGs (Carrier Air Groups). In April 1948, King George VI approved the names for HMAS Sydney, Melbourne – and Albatross for the airbase at Nowra.

The first batch of Hawker Sea Fury 11 FBs were delivered to the RAN in May 1949. They formed 805 Squadron, becoming the RAN’s front-line fighter-bomber, operating from the aircraft carriers HMAS Sydney and HMAS Vengeance – and HMAS Albatross – the air base at Nowra. The Sea Fury was powered by a supercharged, 2,480 hp (1,850 kw), sleeve valve, air-cooled, 18-cylinder radial, Bristol Centaurus engine, driving a five-blade Rotol propeller. A single-seater, it was one of the fastest production model single-engine fighters built, with a maximum speed of 450 mph (724 km/h), and service ceiling of 35,800 ft. (10,911 m); range 700 miles (1,126 km), and up to 1,040 miles (1,674 km) with drop tanks. [figures subject to flying conditions]. 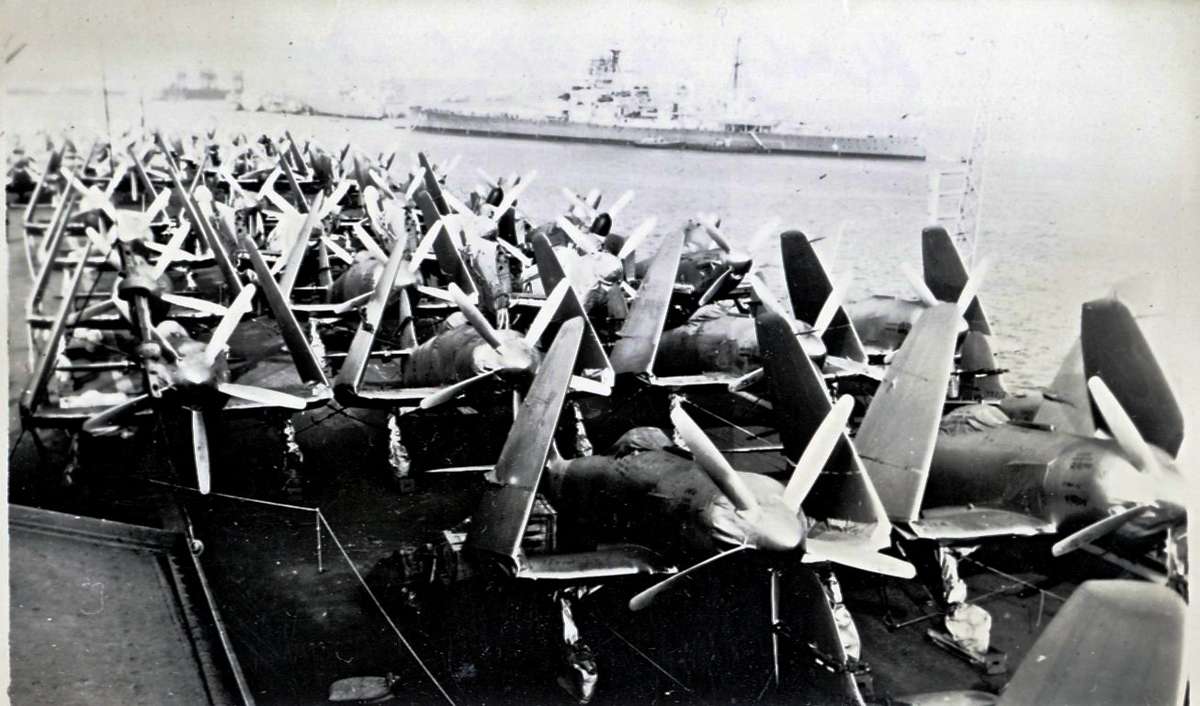 Above and Right: Packed like sardines and inhibited against the weather, Sea Furies and Fireflies are transported back to Australia aboard HMAS Sydney.  These aircraft, together with the two Air Groups formed and worked up in the UK, formed the nucleus of the Fleet Air Arm.  Below:  On arrival in Jervis Bay each aircraft was ferried ashore by barge and then transported to the Naval Air Station in Nowra by road. 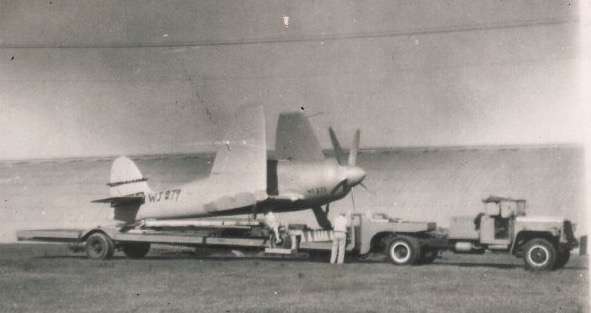 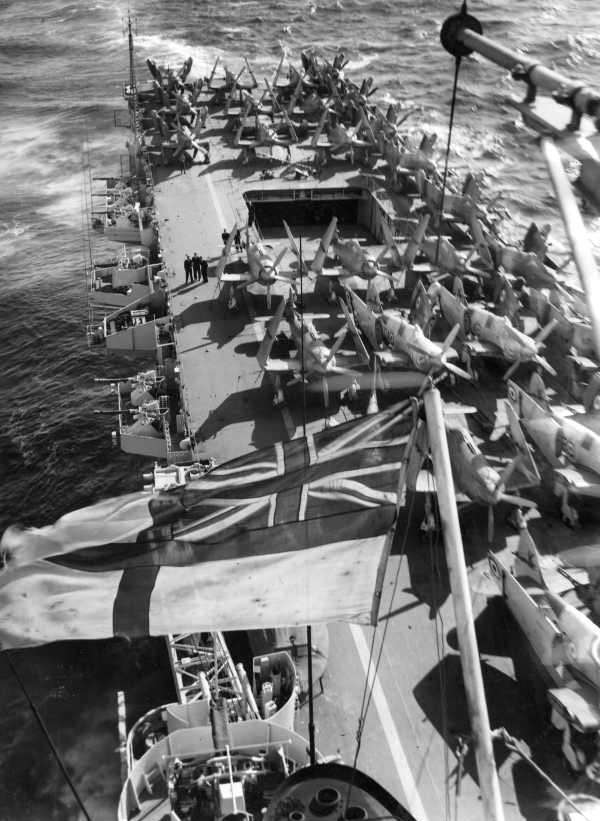 The second batch of Sea Furies and Fireflies were collected in the UK, by HMAS Sydney, in October 1950. These Sea Furies formed 808 Squadron which was commissioned on 25 April 1950 at St Merryn, Cornwall, as part of the 21st CAG. Further Sea Furies to make-up the 101 purchased were delivered by HMAS Vengeance and commercial shipping, with the last arriving in 1953. The front-line Sea Fury squadrons were 805 and 808 and for a short time 850; serving variously on HMAS Sydney, HMAS Vengeance, and at RANAS Nowra.

Both Sydney and Vengeance had hydraulic catapults. On Sydney, prior to her deployment to Korea, the catapult was rarely used even during armament programs. Instead the ‘free take-off’ method was used where aircraft would line-up either side of the flight deck to fly off one-at-a-time. The Sea Furies were often first, using about two thirds of the length of the flight deck. Sydney’s catapult was the only launch method used in Korea; Sydney also did the second trip to Korea because the catapult on Vengeance (and other defects) did not meet front-line standards. 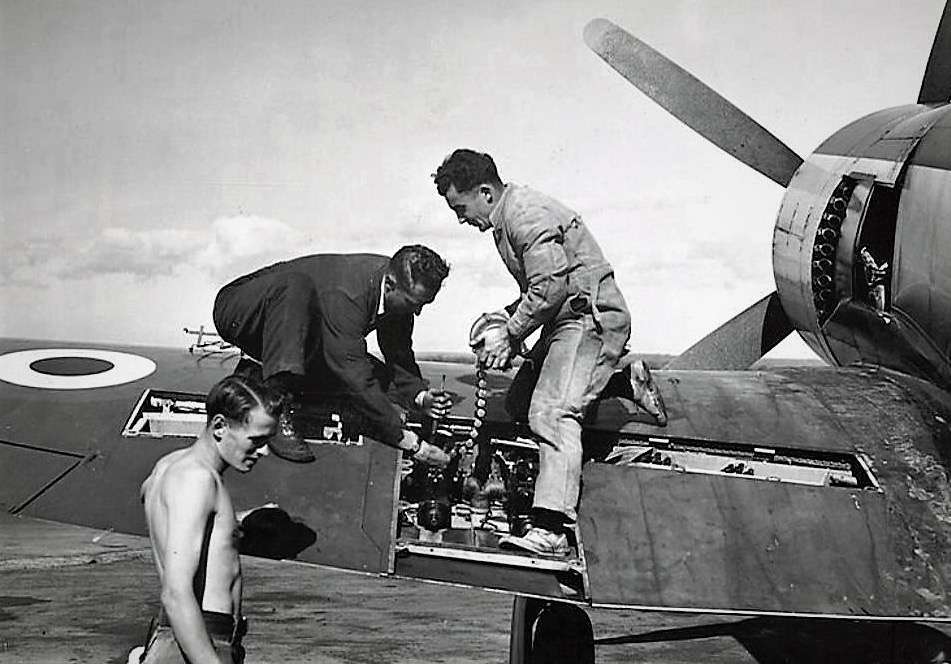 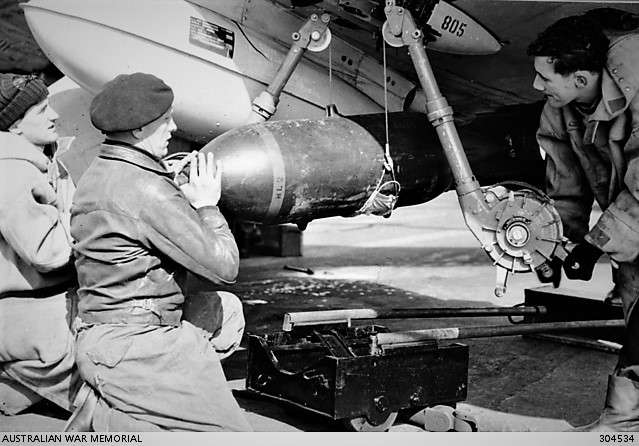 The Sea Fury 11 FB was a high-performance aircraft, in addition to its role as a pure fighter they readily adapted to a variety of tasks, including close support for ground forces, attacks on communications, anti-shipping, and pin-point target raids. A gyro gun-sight in the cockpit assisted deflection shooting. Sea Furies had a high acceleration rate in a dive, yet could quickly pull out and power up to about 10,000 ft. in a steep climb.

The Sea Fury cockpit layout was uncomplicated, with standard stick and rudder-bar controls. The seat was adjustable for height and leg reach and instruments easily visible. In flight the pilot had good forward and downward view; this together with its smooth handling characteristics at all speeds provided excellent control. On approach to a carrier, in the last moments before touchdown, the large radial engine tended to obstruct forward vision to a degree, the same issue applied when taxing or marshalling on the flight deck.

As a fighter the Sea Fury was highly manoeuvrable. Spring tabs on the ailerons and rudder produced a lightness and effectiveness in the controls throughout the speed range. The Perspex canopy offered good all-round vision and in an emergency could be jettisoned, together with a cockpit side panel. The windscreen had armoured glass, and vulnerable parts of the aircraft were protected by armour plating, including protection against gunshot from the rear. Radio equipment included VHF, IFF and homing beacon instillations. Oxygen equipment together with cockpit heating and ventilation were provided.

On 31 August 1951, following a workup with HMAS Sydney, 805 and 808 Sea Fury Squadrons and 817 Firefly Squadron sailed for active service in Korean waters. When North Korea invaded South Korea on 25 June 1950 several RAN ships were immediately deployed. HMAS Sydney arriving on 25 September 1951, relieving HMS Glory which was due for a refit. Sydney now joined with RN and USN carriers patrolling the Korean coast in support of United Nations ground forces and flying strike missions against the North Korean army. 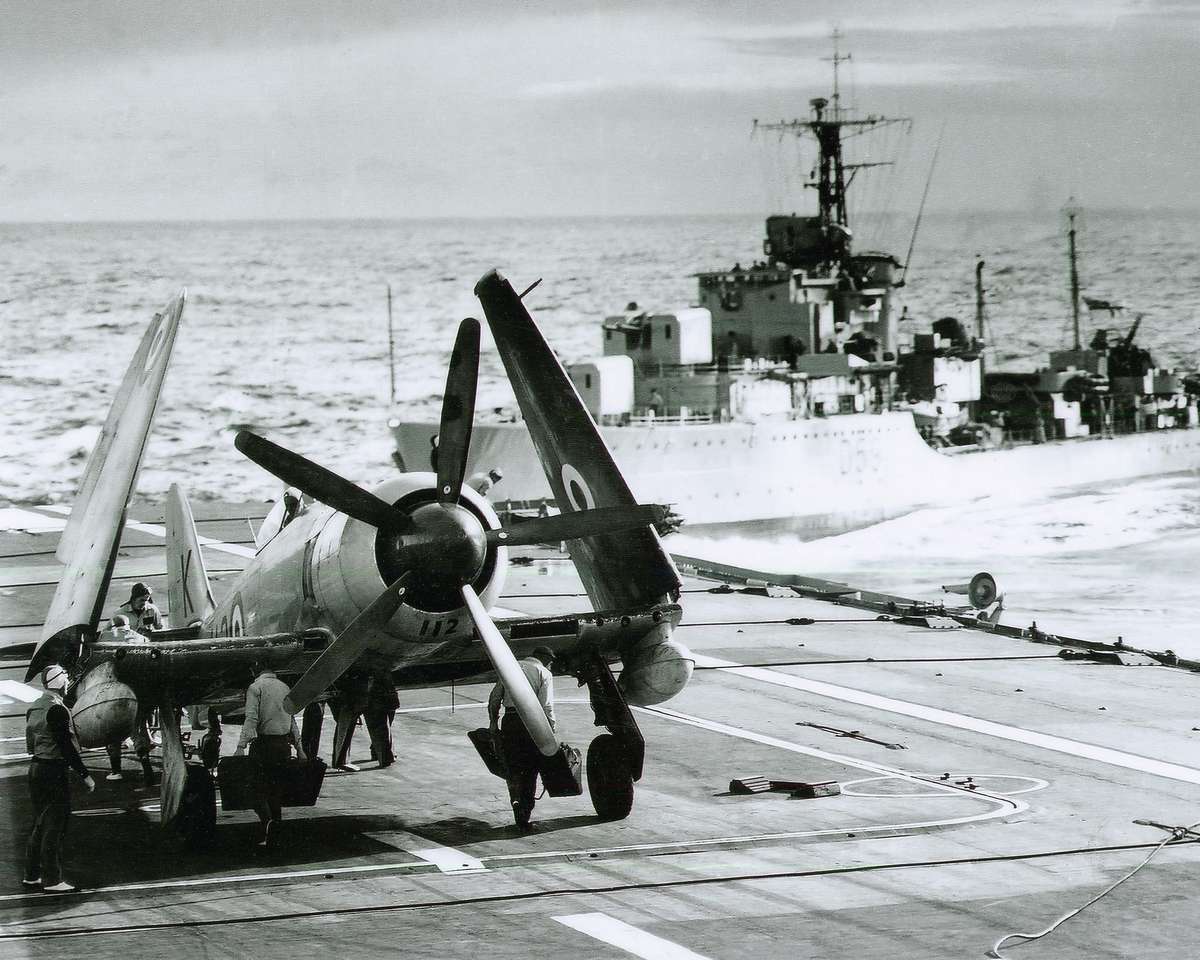 Above: A striking shot of a Sea Fury being moved. The chockmen so close to the undercarriage and the very reduced team numbers pushing it off the lift suggests the aircraft had no brake pressure. That, and the close-by Doggy, indicates it may have been a hangar reshuffle after flying was completed for the day and before a high-line or message bag transfer. Sometimes a reduced hangar handling team, like this, might pop up one or two aircraft to enable access to a potentially serviceable craft for the next day’s flying or to put a potentially extended service aircraft out of the way, up against the fire curtain that divided A and B hangars.  HMAS Anzac, a Battle Class destroyer, crosses close astern. (RAN image).

READ MORE ABOUT THE SEA FURY IN KOREA

The FAA in Korea

Carrier operations were based on 13 or 15-day patrols, sailing from Japan with replenishment at sea. The Sea Furies began operating over Korea in October 1951, with 805 and 808 attacking designated targets with 20mm cannons, three-inch rockets with 60 lb HE heads, or bombs – with the Fireflies bombing bridges and railways[1]. Other tasks involved naval gunfire spotting, escort missions and daylight CAP (Combat Air Patrol). Early in her deployment Sydney set a light-fleet carrier record when her CAG flew 89 sorties in one day.

Sydney’s encounter with Typhoon Ruth was a battle of a different kind, with the ship facing winds of 130 km/h and 45 ft. waves, resulting in damage to aircraft and equipment. HMAS Sydney ended her Korean deployment on 25 January 1952 and returned to Australia. The original plan was for the newly commissioned (RN loan) carrier HMAS Vengeance to deploy to Korea, to relieve HMS Ocean, but she was replaced by HMAS Sydney. Following the ceasefire in July 1953, HMAS Sydney was deployed to Korea in October 1953 with 805, 850 and 817 Squadrons for a second (comparatively quiet) deployment, returning to Australia in June 1954.

Prior to Sydney’s second Korean deployment the ship exercised in home waters and in September 1952 visited the Monte Bello Islands for the Atomic Tests, and in 1953 visited the UK for the coronation of Queen Elizabeth 11. 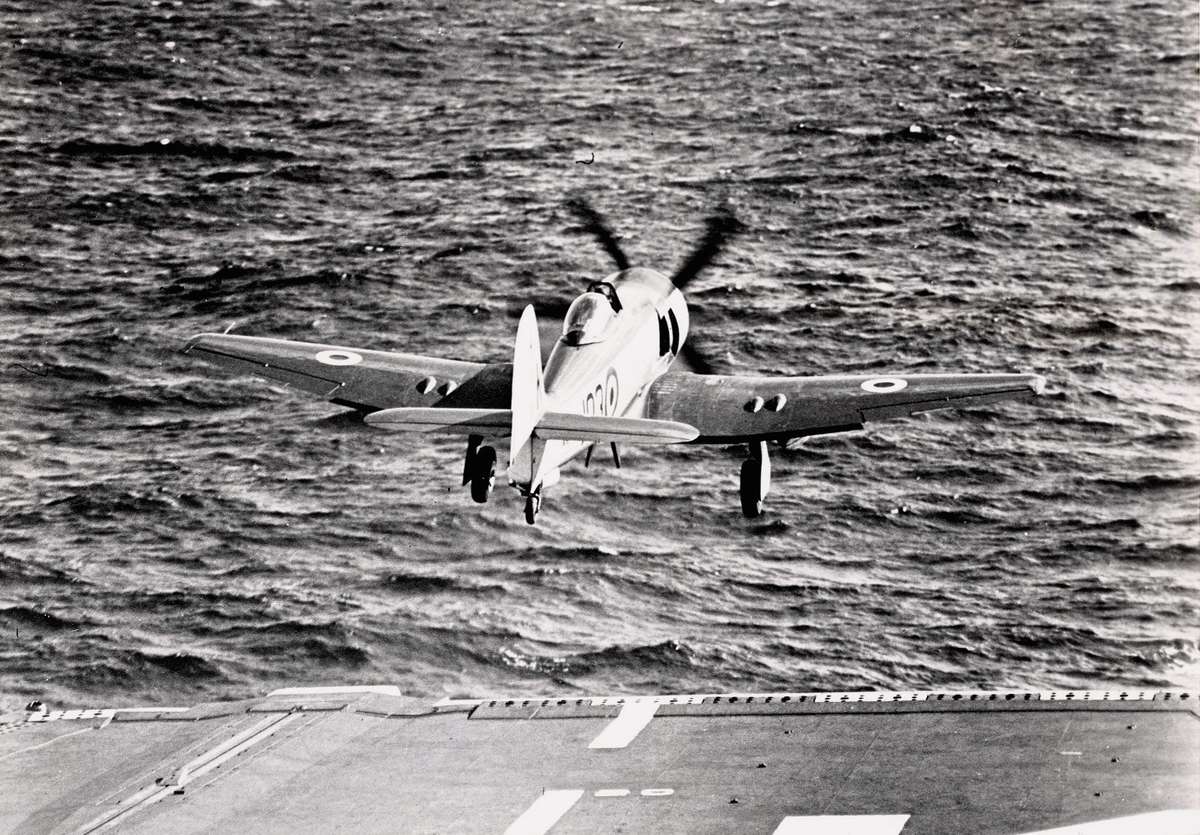 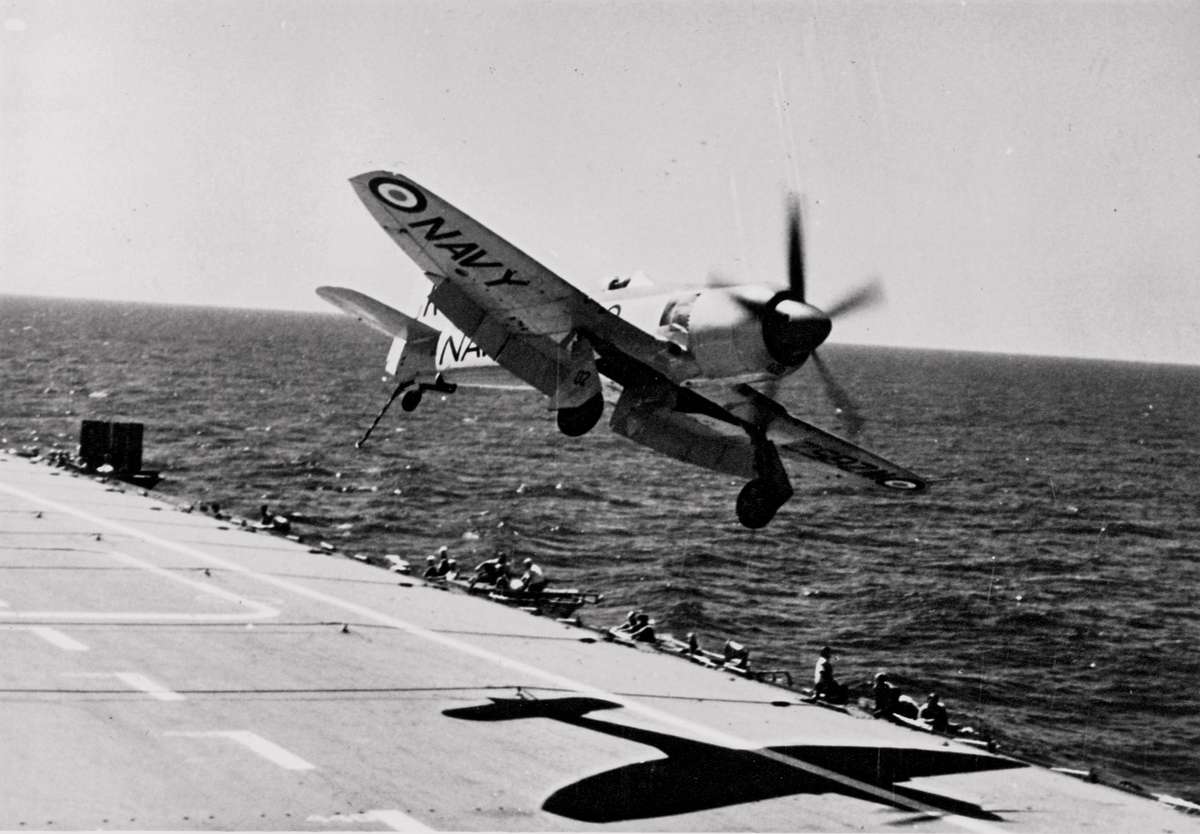 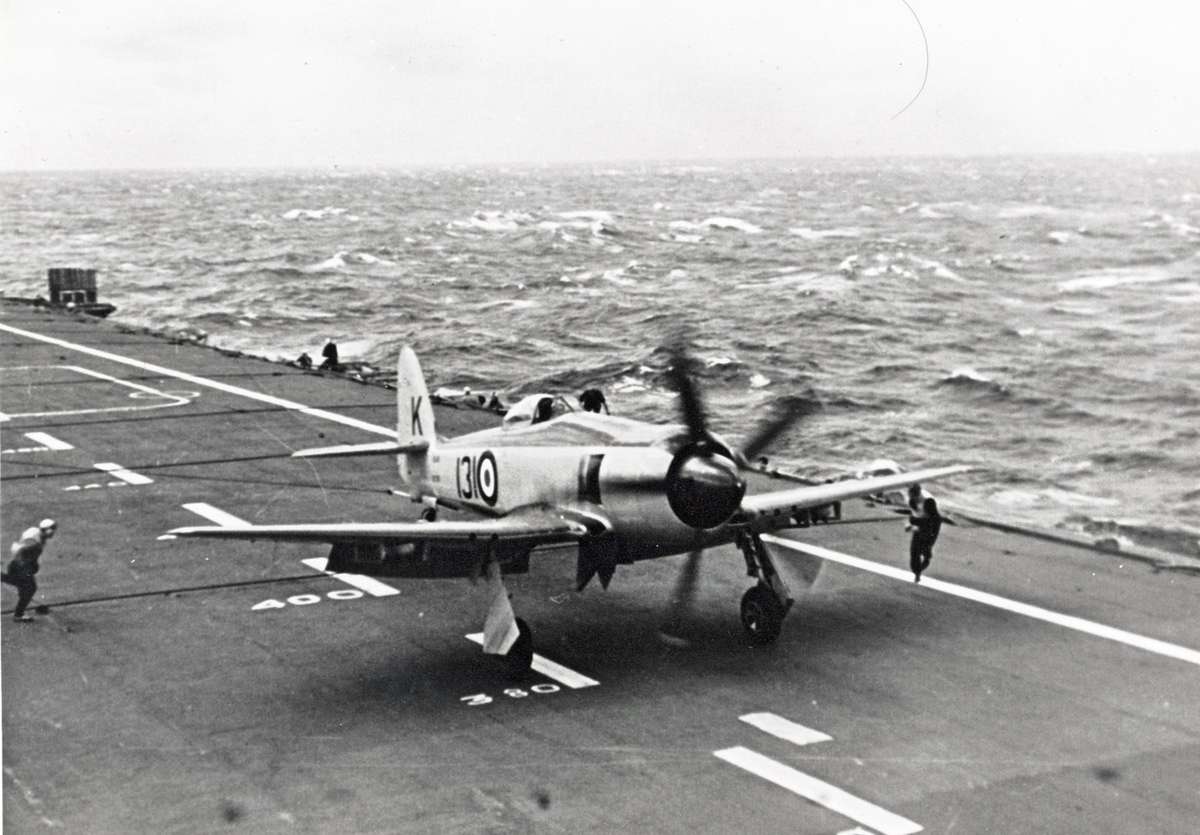 The RAN Sea Furies remained in front line service until 1956, when they were replaced by the De Haviland Sea Venom. 850 Squadron decommissioned in August 1954; 808 in October 1954, and 805 in March 1958. During the late 1950s and early 1960s many of the Sea Furies were sold for scrap, although some were acquired by ‘warbird’ enthusiasts and aviation museums. But, several Sea Furies remained active at RANAS Nowra until the early 1960s, attached variously to 723, 724 or 725 Squadrons, performing fleet communication, radar calibration duties and aerobatic displays at air shows around the country. Nowadays, a few restored, airworthy Sea Furies are in private hands, including pylon racing in the US, which can be seen on YouTube.

If you enjoyed reading about the Sea Fury, why not learn a little more about its replacement, the De Havilland Sea Venom?  The Heritage article is chock-a-block full of facts and photographs, telling another story in the history of the Fleet Air Arm.  Simply click on the image to access this unique collection.

[1] The Firefly (strike aircraft) were on loan from the RN as the RAN F/R5s were being converted to AS6 (anti-submarine) standard at the time.