Related Recollections: The Armourer Articles
Back to Heritage Index
Back to Our Heritage: The Hawker ..

When it was announced that ” Sydney” and its Air Group was to be deployed to join UN forces off Korea I was an 19 year old Naval Airman Armourer serving on 805 Sea Fury Squadron with the 20th  CAG on HMAS Sydney. At the time the ship was cruising off the coast of South Australia. We on the CAG assumed that since we were all ready on Sydney we would be the Air Group to go.

I was delighted at the prospect. This would be my opportunity to prove my manhood and emulate my forebears who had served in WW1 and 2. I also had some trepidation that perhaps I may also sqib it and not be too brave. We did not know at the time that UN forces had complete control of the sea and air and that it was highly unlikely that the ship would come under attack.

The ship then headed off first to Jervis Bay to disembark the CAG and then to Sydney to prepare it for war time service, and to increase the crew to war time complement.

Back at Nowra we on the 20th CAG got the shock of our lives, we were advised that both the 20th and 21st CAGs were to be disbanded and a new CAG (the Sydney Air Group) was to be formed, consisting of 805 and 808 Seafury Squadrons and 817 Firefly Squadron – and both Squadron complements were to be beefed up to war time levels.

The Squadrons then began an intensive work up programme concentrating mainly on deck landing qualifications and armament. Because of numerous postings to the Air Group and also to Air Branch Headquarters, station departments were for the most part very short handed.  This had a dramatic effect on the bomb dump in particular, which was very short staffed. The crew there had great difficulty in keeping up supply of ammunition to the aircraft line. They had to prepare and supply thousands of rounds of 20mm ammo daily together with hundreds of rocket motors and practice bombs with the limited staff available. They also had to provide 500lb live HE bombs from time to time, which created a lot of angst and no little anger and panic among various outfits, some of which in retrospect were quite amusing.

About the middle of the year the air group embarked and began sea work up exercises which was much the same for us Armourers as that ashore.

We left Sydney for Japan early in August 1951 at about the time of my 20th birthday . Training of course continued at a pretty vigorous pace. Our first port of call after leaving Sydney was the old Australian naval base Tarangau on Manus Island. Tarangau was also the compound for the Japanese convicted by the Australian Government for war crimes. The compound was surrounded by a chain link and barbed wire fence and was on the way to Tarangau base proper, and we had to walk past it to get to the canteen etc. The prisoners seemed to be as interested in us as we were in them; they would come to the fence to see us pass by. We thought they were a pretty nasty surly, brutal lot and were to be despised. In retrospect it was not too surprising that they looked pretty unhappy, as most of them had not seen Japan for 10 to 15 years.

Our next stop was Yokosuka in Japan. This was then the headquarters of the American 7th Fleet. I do not remember there being much war damage to Yokosuka but we only had leave from 1600 to 2300 so did not have much time to look around at all. I went ashore once on my own and found the place very strange and somewhat weird. There was virtually nobody on the streets and the lighting was very dim. I did not stay long. 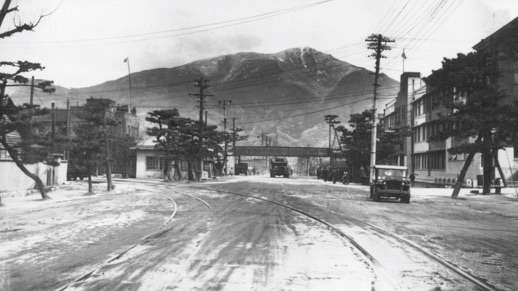 Above: The main street of Kure, showing the BCOF on the right hand side.  Below:  Kure Harbour, circa 1951.  It has since been restored to a spectacularly beautiful setting. 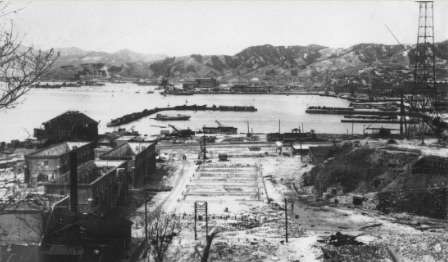 Our next port of call was Kure, which was the headquarters of the British Commonwealth Occupation Force (BCOF), and was also to be our home port for the duration of our stay. Kure had been a huge Japanese dockyard during the war and had suffered extensive damage in the dockyard area, and the township in the adjacent area was totally destroyed. There were masses of pulverised, broken, shattered concrete and twisted steel all along the foreshore. There was no wharfage at all; our berth was a floating pontoon anchored to the shore.

The only multi stored building that I can remember in the vicinity of the dock yard was a three story one that had been taken over by BCOF for a troops’ recreation establishment. It had a bar, restaurant, reading-cum-games room and some accommodation. Since we only had leave from 1600 to 2300 not many of us used this facility, nor did we wander far from the dock area because of the limited time available. Some ventured into the hinterland at weekends when a little more time was available.

The shops, such as they were, were mostly constructed from salvaged timber, sheet iron, canvas and whatever else may prove suitable. The shops were geared to satisfy tourist types such as us and the bars were operated mainly by Europeans and only sold limited varieties of alcohol and food. Public transport was mainly provided by two-wheel trailers attached to old motor cycles capable of carrying two to thee passengers. Japanese labourers used to come on board from time to time to do those laborious, soul destroying jobs that sailors universally hate.

Apart from shop staff, bar keepers and ladies of the night there was practically no traffic on the streets. The ladies of the night were usually quite young, late teens to early twenties and very pretty. It was very difficult for young men such as us to resist for long the invitation  “you comma my house ” especially after consuming a few jugs.

The Japanese were generally quite prepared to be friendly, helpful and were absolutely honest. We on the other hand treated them badly. There was as far as I was aware no physical or verbal violence but we in our various ways constantly reminded them that we were the winners and they the losers and they must be in some way inferior.

After a week or so we set off for our first tour of the operational area in the South China Sea off the Korean peninsula.

Details of the day to day operations have been recorded in the past so no need for them now. Suffice to say that we lost three Sea Fury pilots, and about a dozen aircraft were lost with many more damaged by ground fire. All of the aircrew with two exceptions were recovered; with one dead.  One of the dead Lt Clarkson crashed in the mountains of north Korea and to the best of my knowledge his body is still there. S/Lt Sinclair had to bail out of his damaged aircraft. His parachute did not open and he crashed to earth. His body was recovered and after a short funeral service he was buried at sea. S/Lt Coleman just disappeared in flight. No sign of the crash site was ever found.

We returned to Australia in mid-February 1952 and as soon as we hit Nowra we were sent on leave, the SAG dismantled and we the crew were scattered to the four winds so to speak.

So! How did this affect me? Quite a lot, actually. In my later life I felt deep regret that I was not more conciliatory towards the Japanese; this was a great opportunity to seek greater understanding and respect for a different culture. It also significantly contributed to my diagnosis of PTS and depression that I have since developed and for which I receive continuous medication.