Related Sea Fury VW646 Articles
Back to Heritage Index
Back to Our Heritage: The Hawker .. 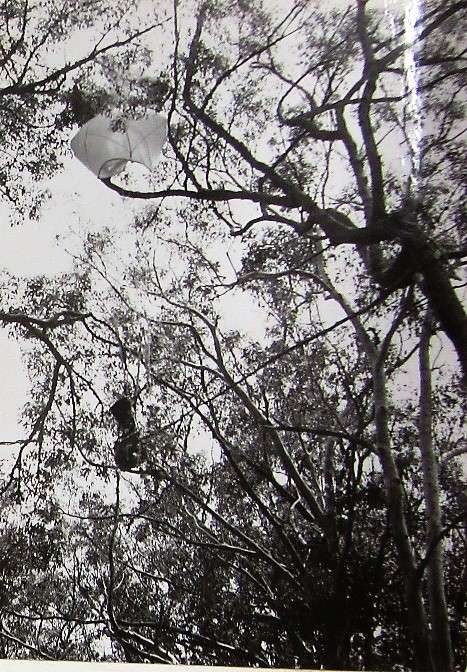 Left: A photograph and newspaper clipping from a Nowra local paper describe the loss of Sea Fury WV646 on 22 November 1950, when the CO LEUT Bowles experienced an engine fire whilst still about 10 miles from Nowra.

The 805 Squadron Diary entry for that day states that the dive bombing programme was interrupted at 1050 by the first complete engine failure in 20 CAG – quote: “…shortly [afterwards] his engine made loud noises and started to catch fire as it started to break up…in the words of the ditty – ‘black smoke came out, great flames came out, Jim Bowles came out – f*** staying in there.’ He got the speed back to 120 knots, jettisoned his hood and got out over the side with his hand around the canopy release. The tail passed over him by a clear few feet but the subsequent investigation showed that his hand must have jerked in the slipstream the necessary one inch to pull the release. It appears therefore the he lost the pilot chute and broke a few rigging lines on the aircraft as he jumped as well as burning a few holes in the canopy. His chute developed a ‘rolled periphery’ forming two lobes and his rate of descent, to his perturbation, was more than one would have wished. However, his descent took him into a 40′ tree which effectively broke the fall and a few minutes saw him on the ground having climbed down the tree none the worse for wear.”

The story goes that having extracted himself from the tree, LCDR Jimmy Bowles was in the need for a cigarette and, while he had the cigarette, he did not have a light. He therefore proceeded to the burning wreck where he was found by Gordon Hardcastle, the 20th CAG Army Liaison Officer, poking a stick into the fire to get a light. Gordon drove Jimmy back to the Air Station in the Army Jeep and, as it was 1300, went straight to the Wardroom bar where many of the Squadron had congregated to ply him with beer. As the bar shutter came down about an hour later, RADM ‘Mumbles’ Coplans appeared, unamused at the scene before him. Apparently he’d been waiting at the sick bay for the pilot to be brought in for a check. (Source:Gordon McPhee. Slipstream, April 1996).