Ian Ferguson remembers the Training Detachment to the States in 1966

“The members of RAN Instructor Group for the A4 Skyhawk to the USA were advised they were leaving Australia in early January 1966. It was a volunteer group names had been submitted in early December 1965. The Group consisted of Aircraft Mechanicians 1st Class A/E Jim Lee and Bob Willis, Chief Electrician Air Barry Herron, Petty Officers Radio Electrical AirGeorge Parker and John Harris, and Chief Aircraft Mechanician Weapons Ian Ferguson.

During the month before departure we together with our wives and seventeen children had to get Passports, Visas, inoculation etc.Then try and arrange banking in the US. Very little information was available on what was allowed in the way of accommodation allowances and the like, plus the short notice did not allow us to forward any household items such as bedlinen and cutlery etc. We were allowed an extra 100 pound baggage allowance which helped. The group departed Sydney on the evening of the 7th February 1966 (one week before decimal currency) again it was at the last moment we learnt we were headed for the Marine Corp Air Station (MCAS) El Toro on the southern outskirts of Los Angeles.

We arrived in LA about 8.30pm and travelled by Bus to El Toro where we were accommodated in Motel like accomodation for transit personnel, kids starving and very little in the way of a place to eat. Remember the thermostat was on about 60 degs F stifling and no control. We met our Boss to be Major Charles “Chuck” Chester the next morning who escorted us to a complex where we all settled for apartments which suited us for the six months we were to be there.An A4E Familiarisation Course for the whole group, then all the course we needed followed. 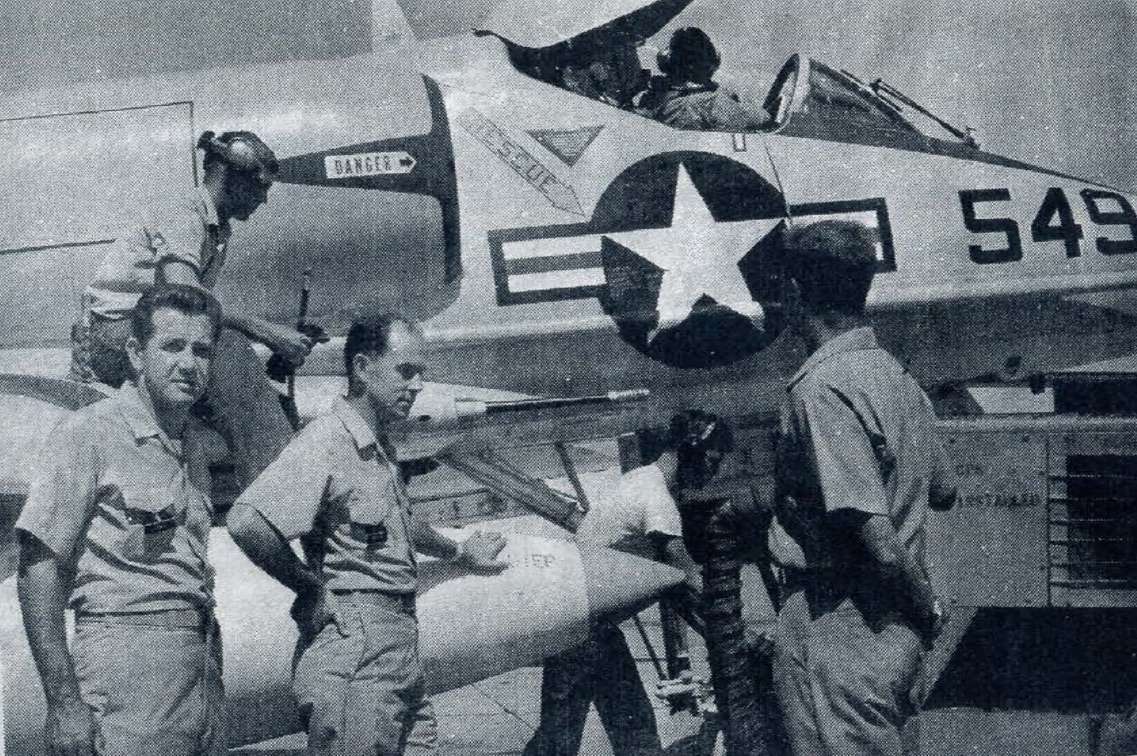 Above: Two press cuttings from the newspapers of the day. The captions read: Left: ‘CHIEFS ARRIVE. Six Royal Australian Navy Chiefs make a preliminary inspection of the Sky Hawk’s J-52 engine. Beginning an eight week course at Naval Air Maintenance Training Detachment = 1087 are (L to R) B.S. Herron, J.Lee, J.F.Harris, R.W.Willis, I.J.Ferguson and G.E. Parker.’  Right.  ‘Australian Trio watches as Lt.Cmdr. Paul Barrish of VA-125 goes through final check[s] prior to taking off in a Skyhawk jet. The three (from left) are Jim Lee, Bob Willis and Barry Herron. They are part of a group of 20 from the Australian Navy studying maintenance and operation of the Skyhawk.’

Courses were on the A4E since the A4F was just going into production. We were fortunate to visit the Douglas factory for a whole day and see the complete production line for the aircraft. We also were able to meet Factory Reps who would be in Australia, Charlie Lundstrom was particularly helpful in solving any problems we had in the differences between the USN A4F and our A4G. I had a little problem since the A4 could handle anything in the USN Inventory, but the powers that be had not let me know what we were purchasing in the way of weapons. Thus I had no idea what launchers etc I need to know. Leut John Selby who was in San Diego helped with Washington in this regard.

Above. A story in ‘The Hanford Sentinel”, one of the local US magazines, about the Aussie Families on exchange and how they found the US “much like home”. Page 2 (not shown here) noted that the families thought the cost of living in the States was about twice what it was at home, despite the advantageous exchange rate of AU$1 – US$1.11.  How things have changed! Click image to expand.

June saw us move house to the Naval Air Station (NAS) Lemoore, just thirty miles south of Fresno. We were all very shortly happily housed in three and four bedroom houses. We were allocated to VA125 which was the Training Squadron for the Air Station, and we split or time between the Naval Air Training Detachment, where we Instructed USN personnel doing courses on the A4E and the soon to be inservice A4F.

LEUT John Selby joined us in NAS Lemoore later in June, having spent the first six months in San Diego learning Tracker. VA 125 had some 120 aircraft all A4Es with about ten TA4Es. Some twenty of the Squadron’s aircraft were permanently stationed at NAS Yuma, which was a weapons training station. All aircrew went there to qualify while Armourers had a great time working like slaves all day every day.

All of us were able to take a flight in an TA4 before we left for home. Mine was called a Sandblower, since it was a low level Navex through the Nevada Desert; I recall the Instructor I was with telling a student we were following he was too high at 400 feet, we then sideslipped under him.”

Below.   Despite good training, things sometimes went wrong, as per the story received below from an ex-A4G maintainer:

In July 1970, I had just finished a Skyhawk course (Peter Welsh, Ben Link, and others) on the Friday and joined VC 724 SQN on the Monday as a young Artificer 3rdClass, (a Tiffy 3, a LS equivalent).  I had a head full of knowledge but as yet no real practical skills – a typical MOBI but not brash or full of myself.  As I entered the J Hangar after lunch I was summonsed by a Tiffy 2 (PO) who was in need of help to get an engine out of a Skyhawk. He was by himself and I knew from last weeks course that we needed to have at least 4 others (approx 6 all up) to perform the task successfully. To my “We need more people” was met by his “It’s all right, I have done this before” I went to my position that of the person who would the engine out using the extraction frame onto the transport dolly. I was to use the speed brace attached to a chain that pulled the engine out. “What do you want me to do” asked I to his “Just wind it out and tell me if it gets hard to wind”.  What could go wrong with that?

So, I start to wind and almost immediately “Its hard to wind” says I.  With that he darts between both fuselage side ports, to the underside of the engine to the hell hole at the back under the engine.  “It’s Ok he says ”Keep winding as it must be misaligned a bit” he says. I wind half a turn and tell him “It’s still tight”. He again does the inspection of all access points and finds nothing wrong and tells me ”Keep winding” which I do.  “Its still tight” repeats I to his “Keep winding” and as I do there is an almighty bang and winding becoming extremely easy.

Next day (perhaps day 2 on the SQN, the memory is a little dim here) as I’m standing in front of a row of Commanders, LTCDRs, Leuts and none of them wearing a happy face, I tell my story of what happened.  It seems that while the hydraulic line could withstand 3000 psi of internal pressure it couldn’t withstand the mechanical advantage I had over it.  Also there were some electrical wires that resisted my mechanical advantage for a while then there was the slight matter of the  Constant Speed Drive (CSD) that was bolted to the front of the engine. The CSD was cunningly hidden behind a close fitting door that had managed to fall down from its propped open position and close itself during the engine extraction process.  The CSD door locking mechanism managed to get itself embedded in the oil tank of the CSD until my mechanical advantage overcame it tearing a hole in the CSD. All these things appeared to happen all at once with the bang that was heard throughout the hangar.

The offending Tiffy 2 was taken off the squadron and I’m not sure what happened to him but he may have been retrained as an X-Ray machine technician in his post RAN career.