New Life For An Old Bird 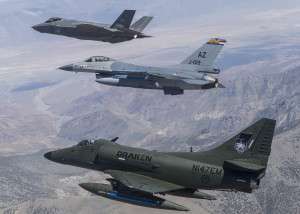 “…Draken International pilot Jeff Scott, who retired as a lieutenant colonel after 27 years in the Marine Corps, has been flying for 17 years and received his wings in an A-4.

“I flew F-35s before I retired and now I’m on the other side flying against them,” said Scott.

The test event will enable an initial assessment of 4th and 5th generation fighter integration, including Link-16 interoperability aspects.

The lessons learned will lay the ground work for future cooperation between 4th and 5th generation fighters and will help shape F-35A tactics for the RNLAF.

“There’s really nothing better than actually going out there and flying and putting the actual aircraft against an actual threat and seeing how it works,” Radvanyi said. “This has been very, very beneficial.”

During the two-week test event, the JOTT organized one large force engagement each day with as many as 12 aircraft flying at a time. While only four Skyhawks flew at a time, there were up to six on the ramp at times.

“It’s been a unique opportunity to see a type of adversary aircraft that you wouldn’t normally see,” said Radvanyi. “The A-4 Skyhawk is not in service with the U.S. military anymore so it’s something that would not normally be seen by the crews that are flying here now.”

According to Scott, Draken International purchased their A-4s from the Royal New Zealand Air Force. Their fleet differs from the A-4s that were once use by the U.S. Navy and Marine Corps because they have been upgraded with F-16A avionics like APG-66 radars, radar warning receivers, heads-up displays and a digital data bus.They also have electronic attack pods that can be used to simulate special presentation requirements for test events.

“It’s a very reliable airplane,” said Scott, adding that the team at Edwards has been “excellent, everyone has been very supportive.”…”

It was delivered to the RAN in August 1971, with 712,5 flight hours logged, arriving aboard HMAS Sydney thence onto an RAN Lighter at Jervis Bay on August 11, then by road transport to Nowra. On Exercise Tasmanex ’79 it launched from Melbourne on August 7 and landed at RNZAF Ohakea, where it was based for a while. The aircraft was withdrawn from RAN service on June 30 1983 and purchased by the RNZAF the following year as NZ6218, now an A-4K. It was damaged in roll over while aquaplaning on landing on 03 June 1985 at Townsville QLD (see photo) and was returned to New Zealand and repaired. It returned to service on 29 March 1990.

The aircraft was retired by the RNZAF on 15 August 2001 with 5594 hours on airframe. It was subsequently sold to DRAKEN in 2013 after 12 years in storage in New Zealand, and remains flying 48 years after its first sortie, as indicated above.