BACKGROUND TO THE RNZAF SKYHAWKS
Read the RAF’s ‘Air Power’ Article of 2001 which gives a good background to why the New Zealanders bought their A4s, how they operated them and some of the stories during their 30-year lives in the service of their country.Click here to access pop-up.

The Labour Government’s 1983 decision not to replace HMAS Melbourne was the death knell for the Fleet Air Arm’s fixed wing element. VC724 Squadron was decommissioned in June the following year, and our ten surviving Skyhawks were sold to New Zealand.

After negotiations, the ten RAN airframes and all their spares and support equipment were sold to the New Zealand government for the bargain basement price of AU$28.2m.  The aircraft were ferried in three batches from NAS NOWRA to RNZAF Base OHAKEA in July 1984 where they would be modified before entering service with No. 2 and 75 Squadrons – to join the existing fleet of A4-K.  Some relatively minor minor updates were incorporated, such as braking ‘chutes and VHF comms, but they retained their RAN colours at least until the entire Kiwi fleet were upgraded to Project KAHU standard (see below).

Right.  Two newly-purchased RNZAF Skyhawks prepare to depart from Nowra.  Note the aft-facing Kiwi on the roundel.  The maintainer who painted it insisted that it was simply a mistake, but many saw it as a final act of defiance.  Image: Pinterest. 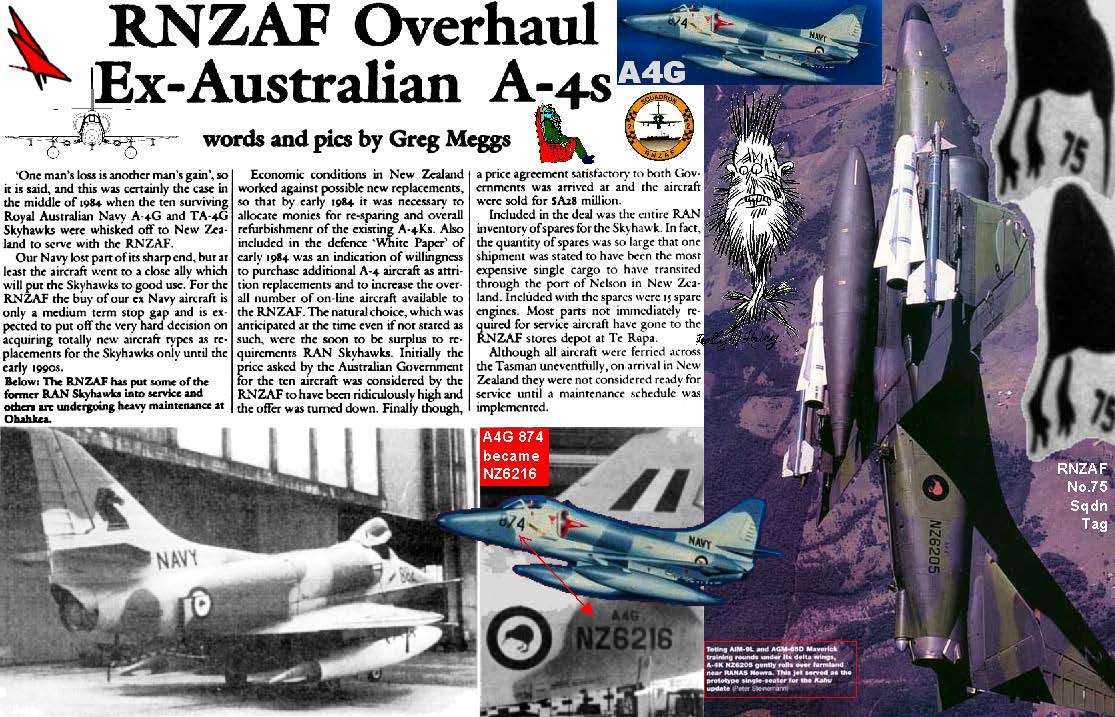 Left and Below.  Phil Thompson, an ex-A4G pilot, has amassed an incredible record of the RAN Fleet Air Arm generally, and the A4 in RAN and RNZAF hands in particular.  His collages, two of which are shown here, generally capture an image or two, superimposed with comment and information that would otherwise be lost.   Here, he talks about the early days of the ex-RAN Skyhawks, which were initially kept as ‘G’ models although with some modifications such as braking ‘chutes.  The RNZAF pilots didn’t like the G model much, which had had a much harder life than their K models as a result of carrier operations – it took a long time to iron out their bugs.

Below:  These ‘before and after’ photos show the difference in the cockpits between an A4-G (left) and a post-kanu A4-K. (Image via Phil Thompson) 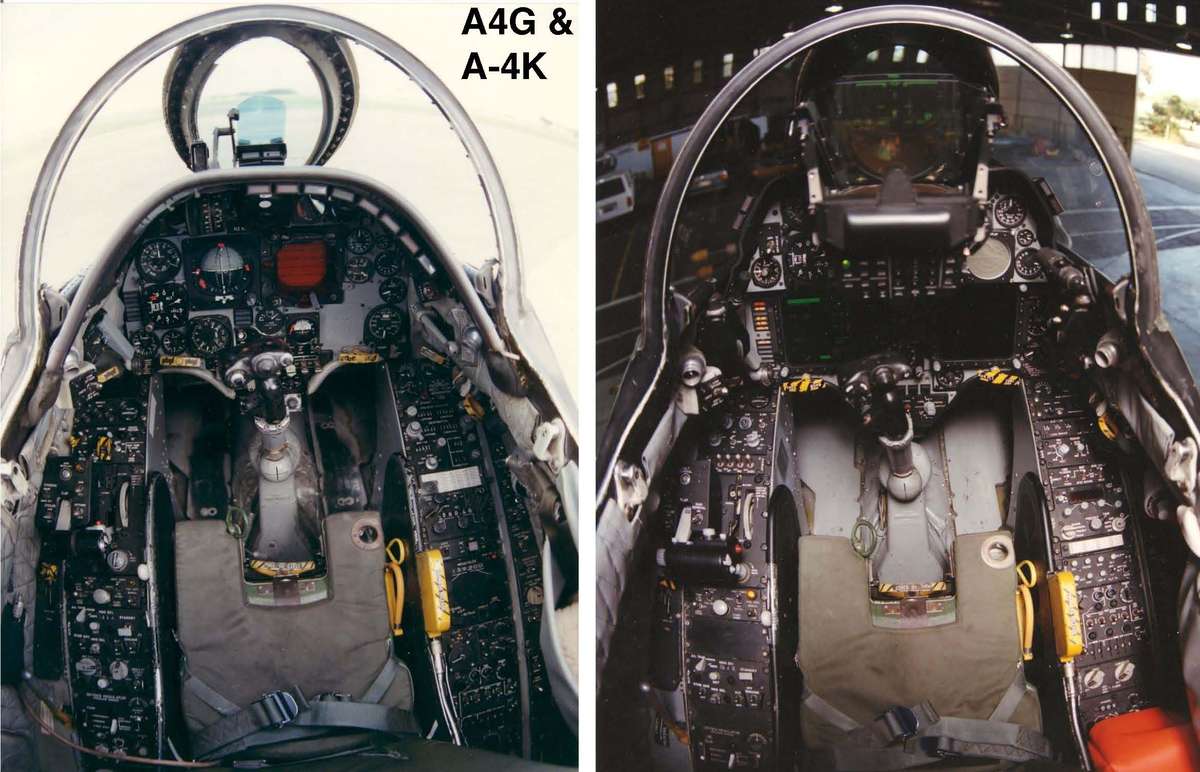 The RNZAF Brings Its Skyhawks Back to Nowra

Australia’s connection to its A4s was not to end with their departure to New Zealand. In 1990 Defence signed a contract with the RNZAF to provide six Skyhawks for Air Defence Support, a move that rubbed salt into the wounds of those who bitterly regretted the decision to phase them out in the first place. Skyhawks appeared in Nowra’s skies again, however, and continued to do so until 2001.

Early 1991 New Zealand and Australia signed “The Nowra Agreement”,  which based RNZAF Skyhawks at HMAS Albatross in Nowra to provide Fleet Support for the Royal Australian Navy.  Under the terms of the Agreement each country shared costs for 400 flying hours/annum. The concept of hiring back the very aircraft we had sold for a song only a few years previously brought howls of protest from many parties – see an excerpt from a current affairs program of the time.  Below.  Navy News 29 March 1991. 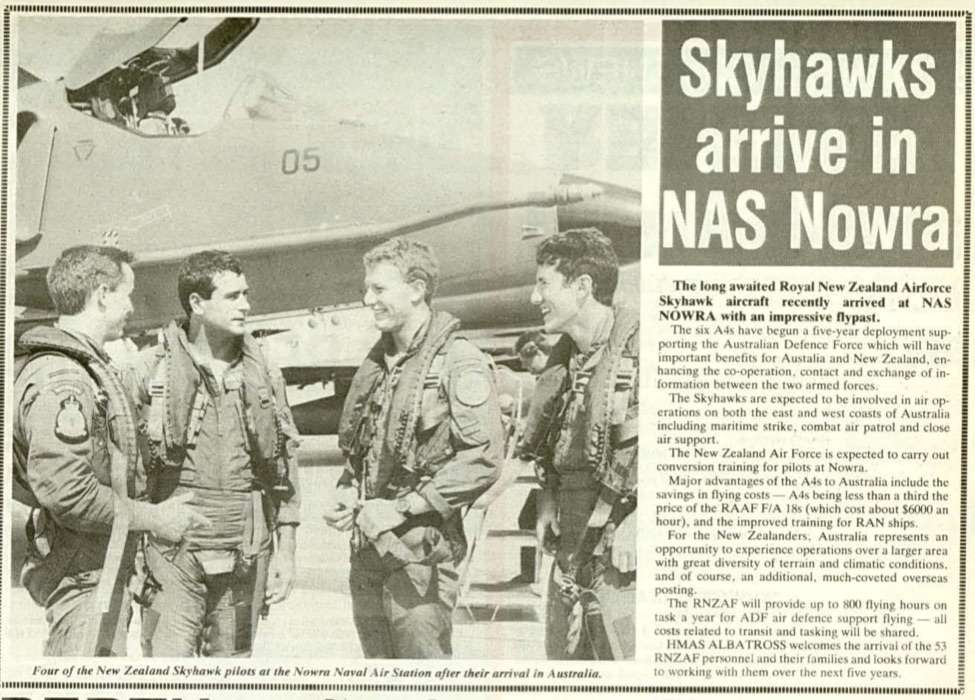 Below: Three Skyhawks of the RNZAF make a low pass abeam HMAS Melbourne. The Kiwis operated to a “Hard Deck” of 50 ft (with newly qualified pilots limited to now below 100ft). One problem was the seeker heads of the training version of the Maverick missiles became encrusted with salt spray, which obscured the picture on the cockpit display.  (RAAF Hornets were limited to 250ft, or “way up in the stratosphere’  as the NZ pilots used to say).

Above: The Nowra agreement was renewed in 1995, with both parties expressing satisfaction in the arrangement. RADM Walls RAN and CDRE Leonard shake hands over the deal. (Navy News 27Jan95).

Above. The Kiwis operated the A4 in a number of liveries, often at the same time as illustrated by the four different paint jobs above. These included the “Early Scheme” of late 1970 when the RNZAF adopted the Kiwi Roundel; the “Maritime Scheme” of 1984 (two known aircraft), which replaced the camouflage tan with a dark grey; and the “Mono Scheme” of 1997 to make savings by moving away from the mish-mash of colours in the fleet.  The first Mono Scheme was an overall dark green with mottled light green markings, but it was reported as “too effective” and was altered to return to the black markings of the previous Maritime Scheme superimposed on the one colour (dark green) paint scheme.

Above. Mothballed F-16s at Davis-Monthan Air Force Base in the States. One aircraft (below) was selected by the RNZAF for closer inspection. (RNZAF images). 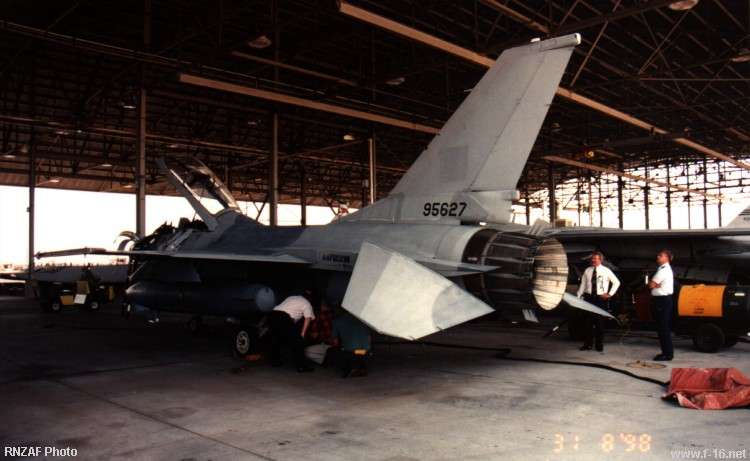 The End of the Line for Kiwi Air Power

In 2001 the new Clark Government in NZ not only axed the proposed purchase of F-16s, but killed the RNZAF’s entire Air Combat Capability. The decision was the death-knell for the Skyhawks, including those deployed at Nowra. The Aussie detachment returned to New Zealand and their aircraft, together with the RNZAF’s other Skyhawks and Macchi trainers, were placed in storage with ‘For Sale’ signs on them.  This included six of the ex-RAN machines.

Below Left.  With an initial price tag of NZ$155m, some trouble was expended on storing the mothballed aircraft, but as time dragged on without a sale they were moved from a hangar to sit in the weather (below right).   Mothballed Skyhawks at RNZAF Woodbourne.  The aircraft were covered in a latex skin to protect them, but storage in the wind and rain didn’t help, as reported by a New Zealand news channel in 2008, here.

Proposal by New Zealand to Replace the Skyhawks

Aware that the Skyhawks were ageing, the The New Zealand Government announced on December 01 1998 that it would lease-buy the 28 Pakistani F-16s which have been kept in storage at the AMARC (Aircraft Maintenance and Regeneration Center) at Davis-Monthan AFB, also known as the (desert) ‘Bone yard’. The Vipers were to replace New Zealand’s 19 ageing, subsonic A-4K Skyhawk strike planes. The aircraft were thoroughly inspected to ensure that they were still in mint condition.

The aircraft were stored at AMARC in 1990 as a direct result of the embargo against Pakistan. The aircraft were put in Flyable Hold for 5 years, during which time 85% of each aircraft’s fuel system was preserved with JP-9, and each aircraft had its engine run once every 45 days. This resulted in the curious situation that most of those aircraft now have more engine run time than airtime, the latter being only 6 hours. This low air-time figure, plus the fact that these aircraft are the most modern F-16A/Bs ever built, is the main reason why New Zealand decided to buy these second-hand F-16s.

New Zealand’s minority government claimed it would make a huge savings by leasing the planes. The 10-year lease for the F-16A/B block 15OCU fighters costs about NZ$200 million ($105 million). The lease should save NZ$431 million over the cost of buying new planes next century. The government opted to acquire the F-16s under a lease-buy deal, with payments spread over 10 years and delivery starting in 30 months.

Pakistan originally paid Lockheed-Martin for the supersonic fighters in 1990, but Congress blocked delivery over concerns about that country’s developing nuclear capacity. 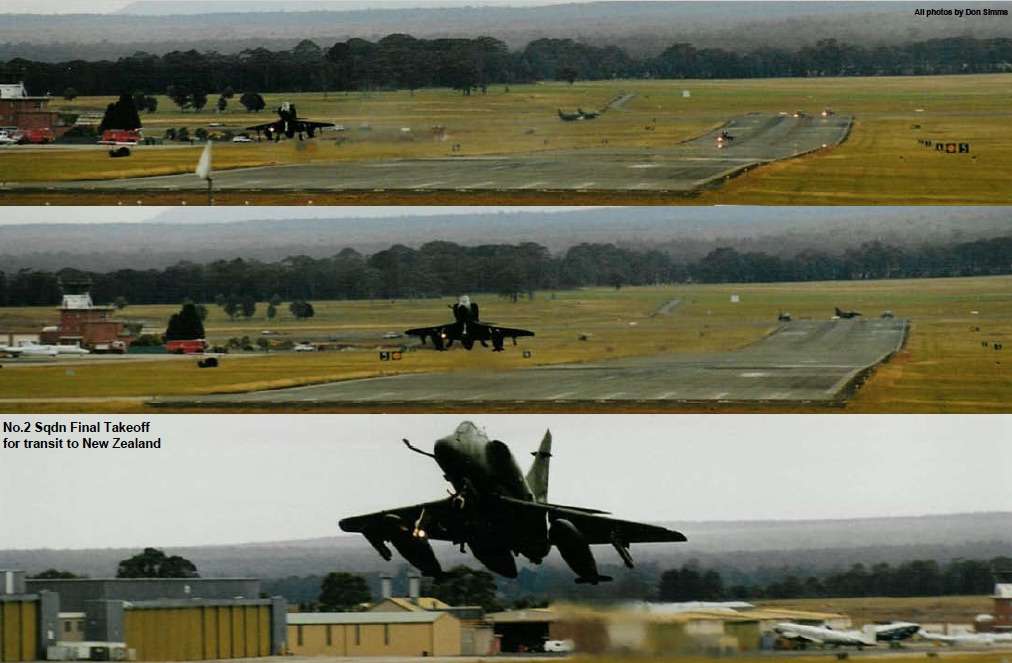 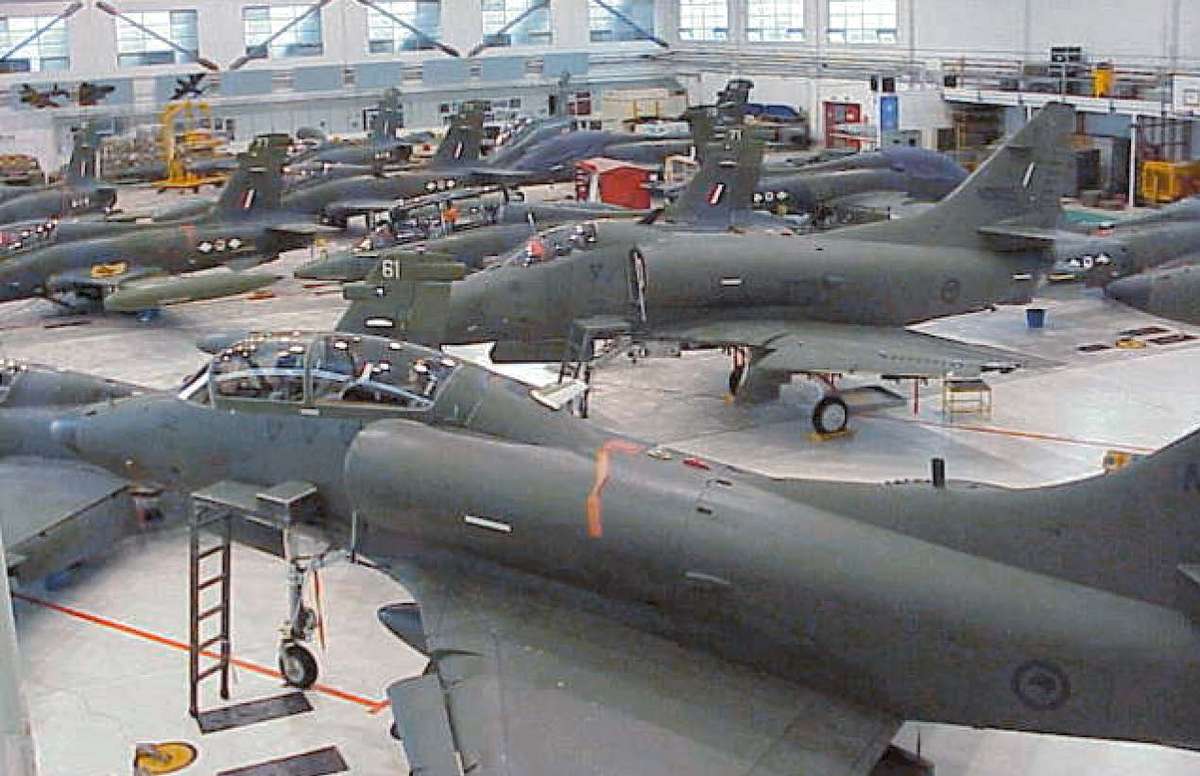 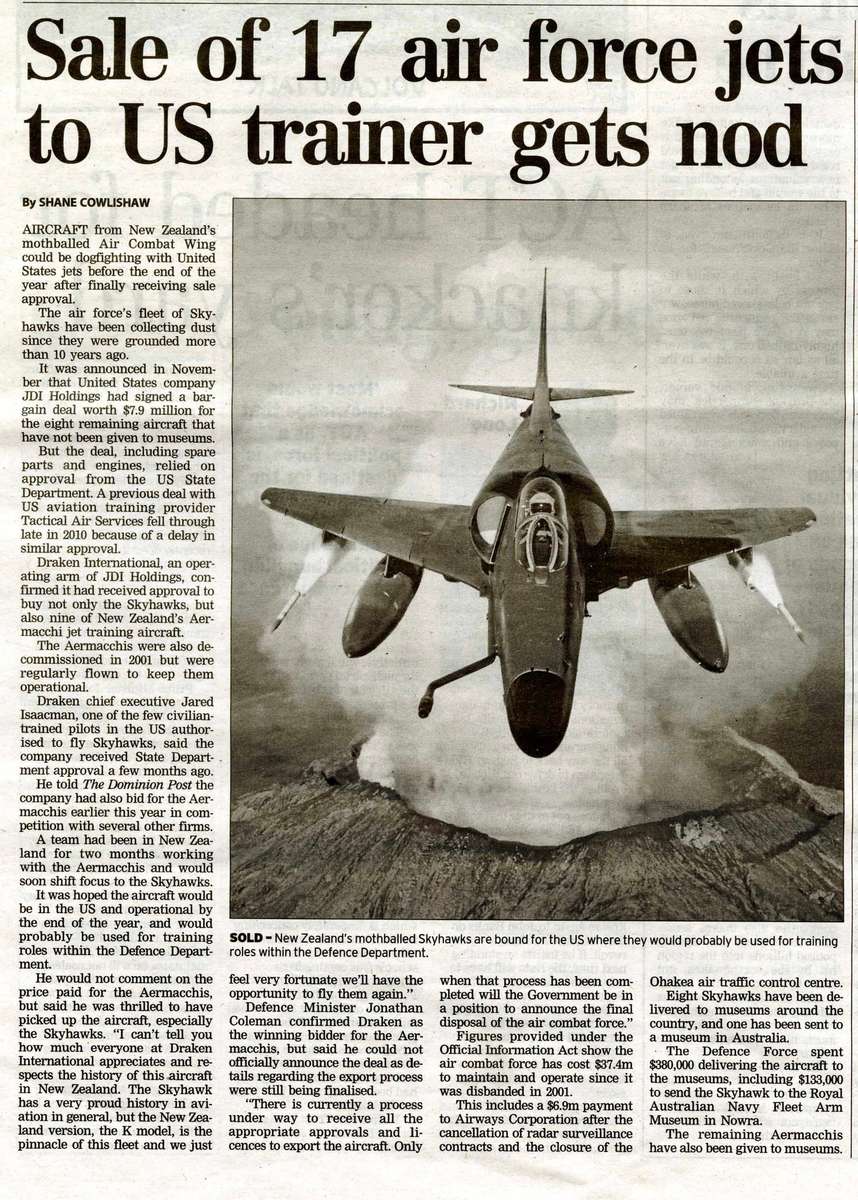 Left.  In what was to be one of the final chapters in the Australian/New Zealand Skyhawk story, this newspaper cutting tells of the approval of the US State Department for their sale to JDI Holdings (USA), which had Draken International as one of its operating arms.  The article, which appeared in “The New Zealander” of 15 August 2012, reported that eight Skyhawks and nine Aermacchis were to be purchased.  Of the eight A4s, six were ex-RAN.  The remaining nine airframes were donated to museums, including one TA-4 to the Fleet Air Arm Museum in Nowra.

And so, in what was to be a final circle, Australia’s remaining A4s returned to their country of manufacture to fly in Amercian skies in a training role. The story of the company that bought them can be seen here, and a final list of the surviving airframes here.