Following the reversal, in the early 1960s, of an earlier Australian Government decision to disband the RAN Fleet Air Arm and to pay-off the carrier HMAS Melbourne, a Navy Office search commenced to identify replacements for the RAN’s aging fixed-wing aircraft. In the case of the Sea Venom All Weather and Night Fighter, the choice narrowed down to the A4 Skyhawk aircraft, used by the US Navy (USN) predominantly in the Air-to-Ground “Attack” role, but also in limited numbers as a “fighter” when operating from the USN’s Anti-Submarine Warfare carriers of the Modified Essex class.  Out of all naval aircraft then available and capable of operating from a Light Fleet Carrier, the Skyhawk undoubtedly had the best all-round capability in both the attack and fighter roles.  The doubts expressed by some aviation “experts” in Defence as to the ability of Melbourne to operate these aircraft were dismissed when, in May 1965, a USN Skyhawk successfully carried out an arrested landing on Melbourne, followed by a catapult launch.

The A4G model Skyhawk to be purchased for the RAN was, apart from certain Electronic Warfare equipment that the RAN was not purchasing, to be built to the same specifications as the latest USN A4F model.  It had the current USN avionics, radar and weapons delivery systems and the J52-P8A engine.  Additionally, unlike its USN counterpart, it was wired to carry up to four AIM9B Sidewinder AAMs on wing stations, interchangeable with the normal attack weapons fit. 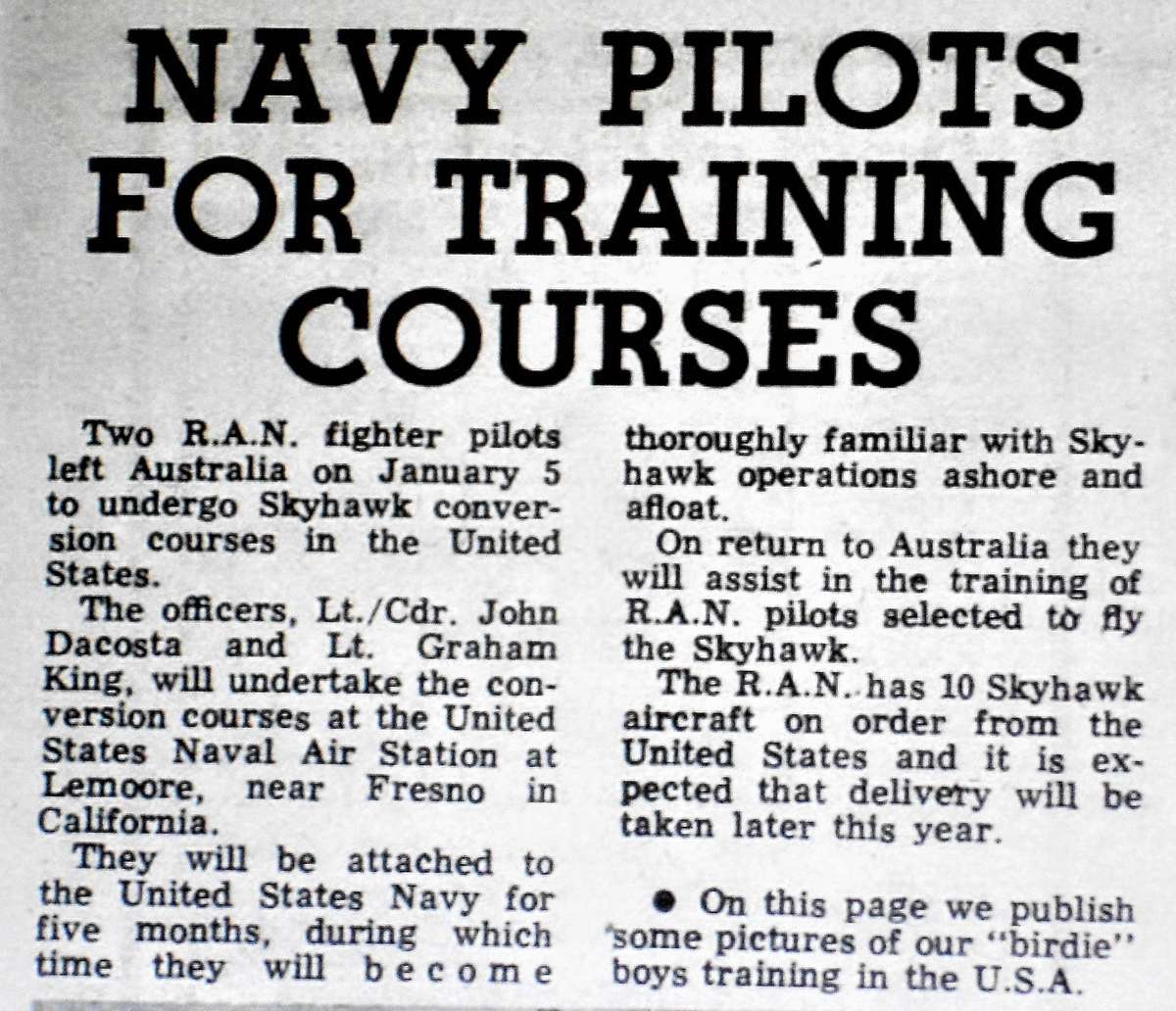 In 1967, the CO and Senior Pilot (designates) of the RANs yet-to-be-recommissioned 805 Squadron were posted to the US Navy’s Attack Squadron 125 (VA125) at NAS Lemoore, California, for 5 months of A4 Skyhawk training in preparation for returning to Australia to conduct the first RAN Skyhawk Operational Flying School (OFS).  At the time, the Vietnam War was placing great demands on USN Carrier Air Groups. To keep up the demand for A4 Skyhawk pilots, the very large VA125 was running a continuous Replacement Air Group (RAG) training programme with a syllabus which, fortuitously, met most of the RAN’s requirements.

The two RAN pilots were experienced in carrier operations in the RAN’s 1950s era Hawker de-Havilland Sea Venom subsonic all-weather day/night fighter in the primary role of air defence (4x20mm cannon) and  limited secondary role of air to surface attack (cannon and un-guided  3-inch Air-to-Ground rockets).  One pilot was a graduate of the Royal Navy’s Air Warfare Instructors Course (LCDR DaCosta) and the other was a Qualified Flying Instructor and Instrument Rating Examiner (LEUT King).  Neither had much experience as “attack” pilots; rather, their training had been more in the fighter/air defence role.

Perhaps the greatest difference that they experienced was that they were coming from a relatively small naval aviation community, quite at home with one aircraft carrier and a Naval Air Station and having Naval Air Squadrons of 6 to 10 aircraft, commanded by officers of LCDRs rank.  By contrast, at NAS Lemoore, California, the VA125 flight line had a line-up of 100 Skyhawks each morning, ranging from the “ancient” A4B (by then relegated to the In-flight Refuelling Tanker role) right through to the latest version (TA4F).  Pilots almost needed a map to find their allocated aircraft on the flight line.  The airfield had parallel 14,500 ft. concrete runways.  The CO VA125 was a four-ring Captain and both the XO and Operations Officer were Commanders.  There was an enormous A4 RAG student population ranging from Ensigns straight out of the USNs Pensacola Flight School, to ex-ASW (and other) pilots of Commander’s rank, just busting to get to Vietnam!

The “culture shock” of this huge difference in aviation circumstances was reduced to negligible proportions by the hospitality and courtesy extended to the RAN pilots (and also to the team of maintainers who were attached to VA125 for technical training/experience on Skyhawk aircraft and equipment).  Apart from the innate friendliness of individual USN personnel, RAN personnel felt that their reception had quite a lot to do with the fact that they were not seen as just another group of US “aid recipients”.  Not only was Australia doing its share in the Vietnam War, but the Australian Government was paying for the Skyhawk purchase and for all associated training being carried out in the USA. These facts seemed to be well known to VA125 personnel and it seemed to have generated an enormous degree of good-will.  There seemed to be a determination that, so far as training was concerned, the Australians were not going to be ‘short-changed’ in any way.

The A4 RAG syllabus was entirely attack orientated and fully met that aspect of the RAN’s requirements.  Highlights were the “Sandblower” low level navigation and attack exercises over much of the Nevada and Arizona deserts.  There was no “fighter” phase of the USN’s A4 training so special arrangements were made for RAN pilots to carry out a one week deployment to MCAS Yuma, Arizona, for air-to-air gun attacks on towed banner targets, Ground Controlled Interception training and Sidewinder firings against parachute flare targets.

Having had considerable air-to-air experience in the RAN using a gyroscopic lead-predicting gun-sight, the RAN pilots were somewhat deflated to find that they were now in a similar position to much-earlier World War I fighter pilots as they tried to get shells to hit  the towed banner using the Skyhawk’s “fixed” bombing gun-sight! They also had a problem getting adequate ranging information when firing Sidewinders against a stationary flare target. (Sidewinder ranging proved less of a problem later because, after training using “captive” Sidewinder missiles, the A4’s in-built terrain avoidance APG53A radar and visual air-to-air ranging, squadron pilots became proficient at getting themselves into the Sidewinder firing position.  “Live firings” were also conducted against the TONIC heat-source target towed by a JINDIVIK drone at the Jervis Bay Missile Range).

An impressive USN professional concept was literally dumped in RAN pilots’ laps with the introduction to them of the 5 to 6 cms. thick A4 NATOPS Manual.  Until then, RAN pilots had only known the British-style “Pilot’s Notes”- a small notebook sized publication containing essential aircraft operating details, check lists and emergency procedures, designed to fit into the leg pocket of a flying suit.  Much of the technical material conveniently brought together for aviators in the NATOPS Manual had only been available for earlier British-type aircraft by researching the maintenance manuals for the aircraft type.  NATOPS was a great tool for improving a pilot’s knowledge of aircraft operations and systems and was adopted into the RAN with the American naval aircraft. It did come with a small supplement which could be carried in the aircraft.

Day and night carrier qualifications (CARQUALS) were carried out by RAN pilots and the rest of the Skyhawk RAG in the designated “Duty Carrier” (USS Kearsage), off San Diego.  This final part of the training programme (re-)introduced the RAN to the use of a Landing Signals Officer (LSO), previously known in the straight-deck carrier age as the “Batsman”, a deck-landing “aid” which had not been used in the RAN since the introduction of the angled flight deck and Mirror Landing Aid.  After CARQUALS, the RAN pilots strongly recommended the re-introduction of the “batsman” concept for Skyhawk operations from HMAS Melbourne, mainly because of the enhanced safety factor, especially at night, when recovering an aircraft that had an approach speed some 10 knots faster than the aircraft which it was to replace.

In summary, the Skyhawk training with the USN entirely met RAN needs and set up pilots well to plan and conduct RAN Skyhawk courses in Australia.

The RAN’s Skyhawks were delivered to NAS Nowra in late 1967. The first flight in Australia took place on 13th December 1967 (TA4G Skyhawk 911) and 805 Squadron was recommissioned on 10th January 1968 as the Skyhawk Operational Flying School.

The first OFS got off to a bad start despite the enthusiasm of Squadron aircrew and maintainers. The problem was that there was a serious shortage of support equipment and spare parts, due to an initial lack of understanding by RAN logisticians of the USN Federal Stock Number (FSN) system. 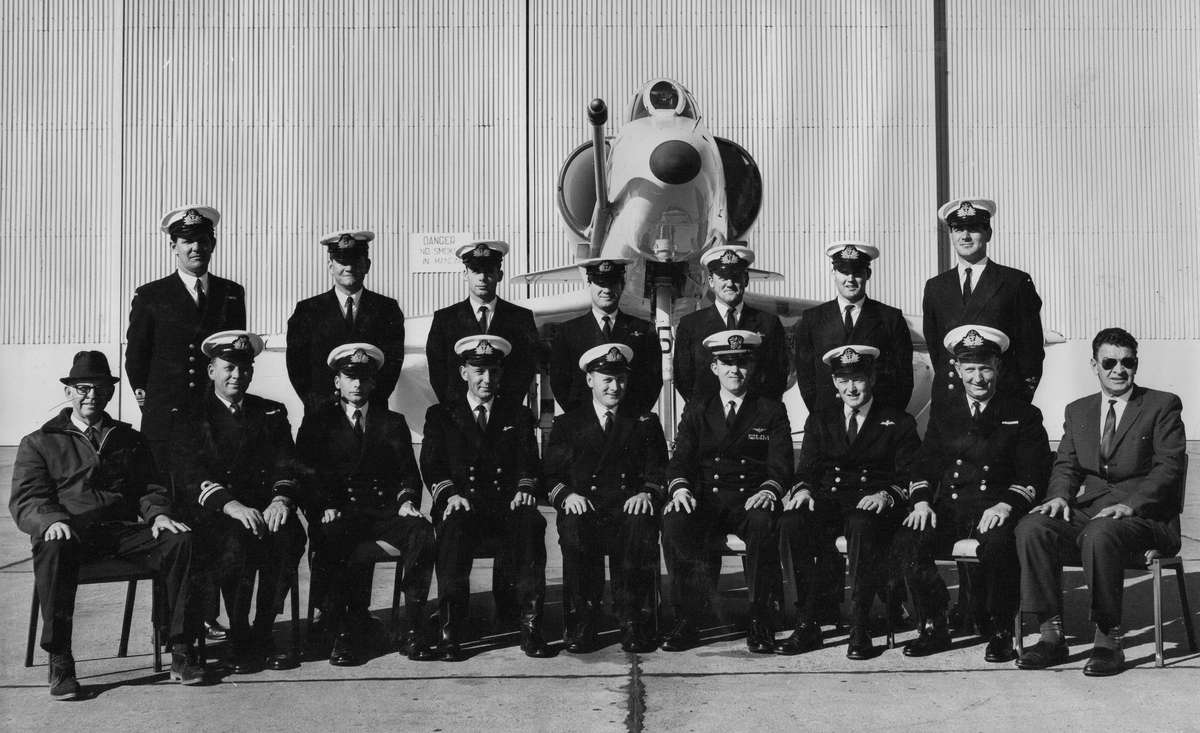 The RAN belatedly appreciated that with previous aircraft purchases from the United Kingdom, British Admiralty staff, in motherhood mode, had ensured that an appropriate initial outfit of spares and ground equipment where provided at the same time as the aircraft.  The US Department of Defense, quite understandably, did not feel under any obligation to do the same thing in what to them was a purely commercial transaction. Since the Australian Government was funding the Skyhawk programme in installments, the US authorities merely ran down the parts list, in FSN order, until the monetary value of each installment ran out, and then forwarded those items to Australia.  Since the FSN sequence of items was quite arbitrary, the RAN had received, for example, spare Skyhawk mainplanes that were not expected to be needed for years, but not the ladders that aircrew and maintenance personnel needed to climb up and into the aircraft.  There were many, more serious, shortages, so in order to rectify the logistics problem, Navy Office set up an experienced team to identify the most needed equipment for initial operations and to liaise with US authorities to resolve the supply priorities.  In the meantime, the first OFS Course was postponed and did not really commence until July 1968.

Once under way, however, the first OFS progressed most satisfactorily and was completed in December 1968.  The pilots on that Course were fortunate in that whilst HMAS Melbourne was still undergoing a major refit and modification in preparation for the embarkation of the new generation of aircraft, the Royal Navy’s HMS Hermes had paid an operational visit to Australia and kindly made its deck available for RAN pilots to gain deck-landing experience.

So began a most successful period of Skyhawk operations in the Fleet, prematurely brought to an end by the “paying off”, without replacement, of HMAS Melbourne in the early 1980s.