Related IROQUOIS N9-883 (898) Articles
Back to Heritage Index
Back to Iroquois: Airframe Histor..

In August 1964, 723 Squadron was under the command of LCDR Jim O’Farrell, who had stood by the build of our Iroquois helicopters at the Bell factory in Fort Worth, Texas. His first task when the new aircraft arrived at Nowra was to train two squadron QHIs in preparation for the accelerated helicopter training task generated by the introduction of the Wessex.

Lieutenants Tony (General) Booth (ex RN) and Jerry O’Day had both been processed by early September and categorised as A2 instructors on the Bell UH 1B Iroquois. Tony had been a Royal Navy Helicopter Specialist Pilot (HSP) and QHI while in addition to being a rated QHI, Jerry had also been a QFI and IRE (RAAF CFS).

Their first students were a group of Midshipman from RAAF AFTS at Pearce, WA where they had been training on Vampires. Some had volunteered to move to helicopters while some in the group had been found wanting during the final stages of training at Pearce and had been transferred to the rotary wing course.

LCDR David Orr took over as CO 723 Squadron later on in September and the pressure to get the course through remained high, with both instructors flying in excess of 60 hours per month. On one day one of the instructors logged 39 engine-off landings wearing out a pair of skid shoes, a bit nerve racking with students doing most of them.

To avoid congestion at NAS Nowra most of the training was carried out at the Jervis Bay airstrip with no other traffic and where briefing and crew rooms were available and BBQ lunches were provided. It was a perfect training environment.

The flight in question, on 11 November 1964, was a dual sortie concentrating on forced landing practice and steep turns, Jerry O’Day was the instructor and MIDN John Macey the student. At the time the instructor had over 150 hours on the Iroquois while Macey had 19.

Forced landings involved the instructor closing the throttle to flight idle without warning the student who then had to lower collective, establish himself in auto-rotation and manoeuvre the machine towards a site suitable for an engine-off landing. Once it was obvious that the chosen site either would or would not be reached but at a safe altitude, the throttle was re-opened and a power recovery carried out. 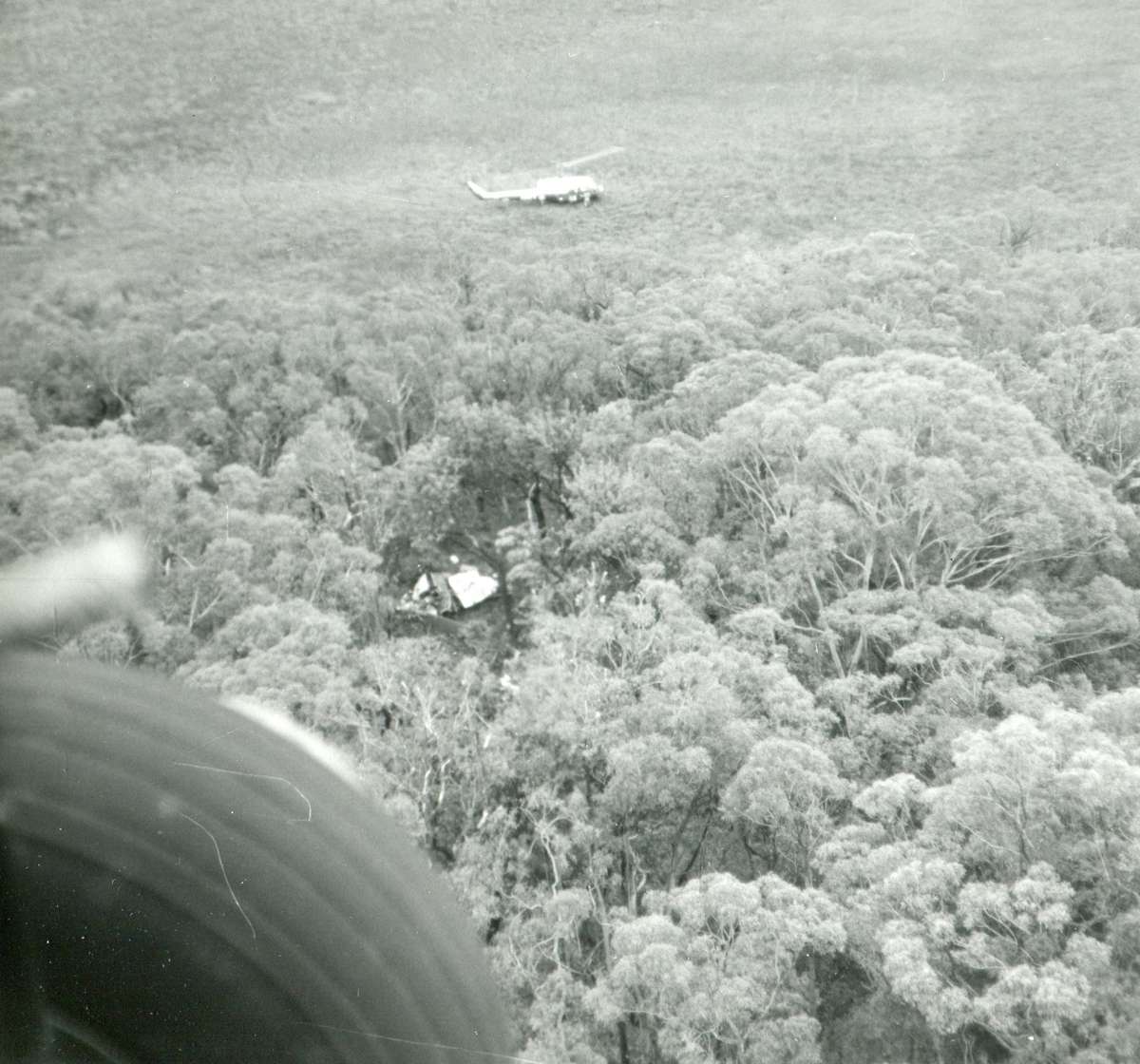 General overview of accident site. The spot where the (intact) UH1 is sitting was the intended target, approx. 50 metres upwind.

In this accident the aircraft crashed into trees at about 50 knots some 50 to 100 meters short of a cleared swampy area that would have been a suitable emergency landing spot.

The aircraft was destroyed and the instructor (and his seat) was projected through the instrument panel and nose of the machine and ended upside down some 5 to 10 metres away from the main wreckage. This was because the inertia reel did not immediately take up, and the instructors body moved forward some distance before it did. As a consequence, the seat was torn from its attachment points and he became a projectile.

The student’s seat remained in the helicopter and he sprained an ankle. Both cyclics had been broken off and the anti-torque pedals flattened while both collectives were in the fully up position. The instructor’s throttle was wound to full open while the student’s throttle was fully closed! There were no witnesses to the accident. 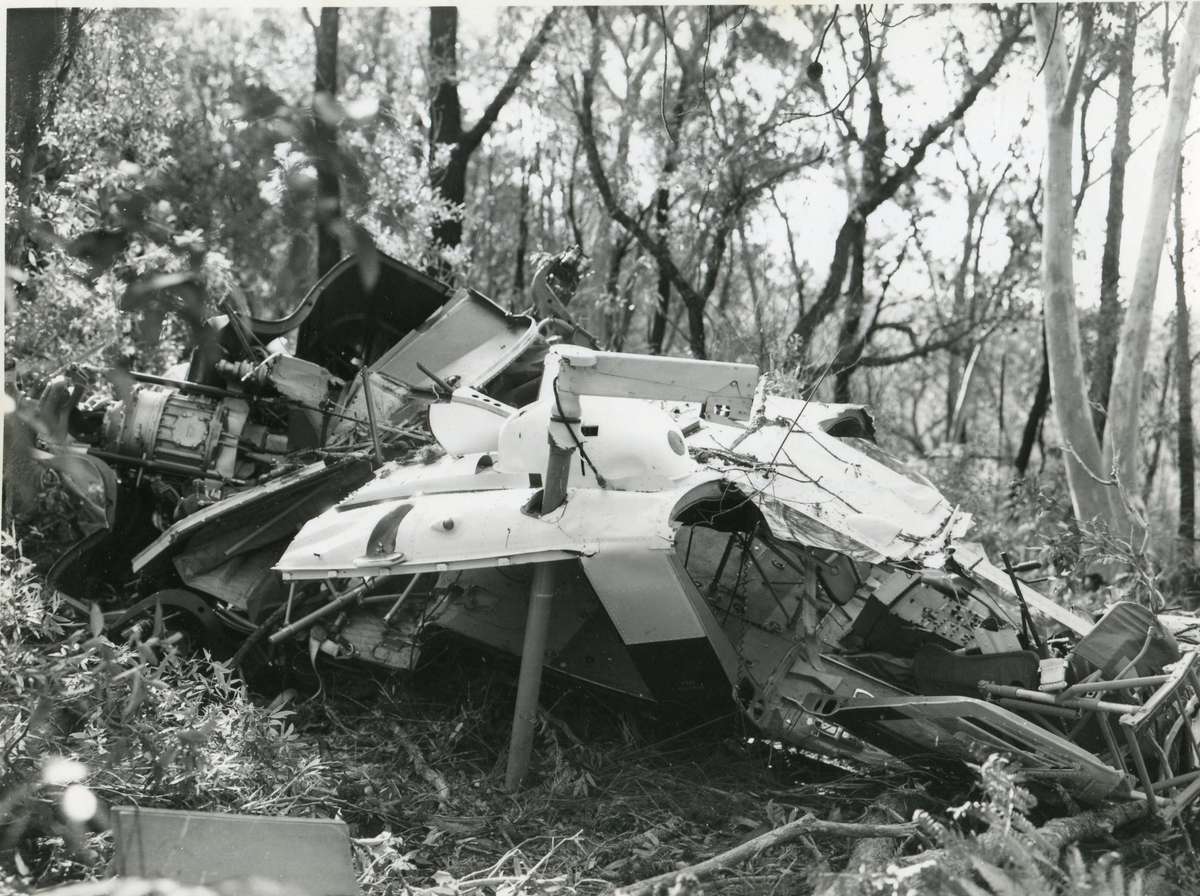 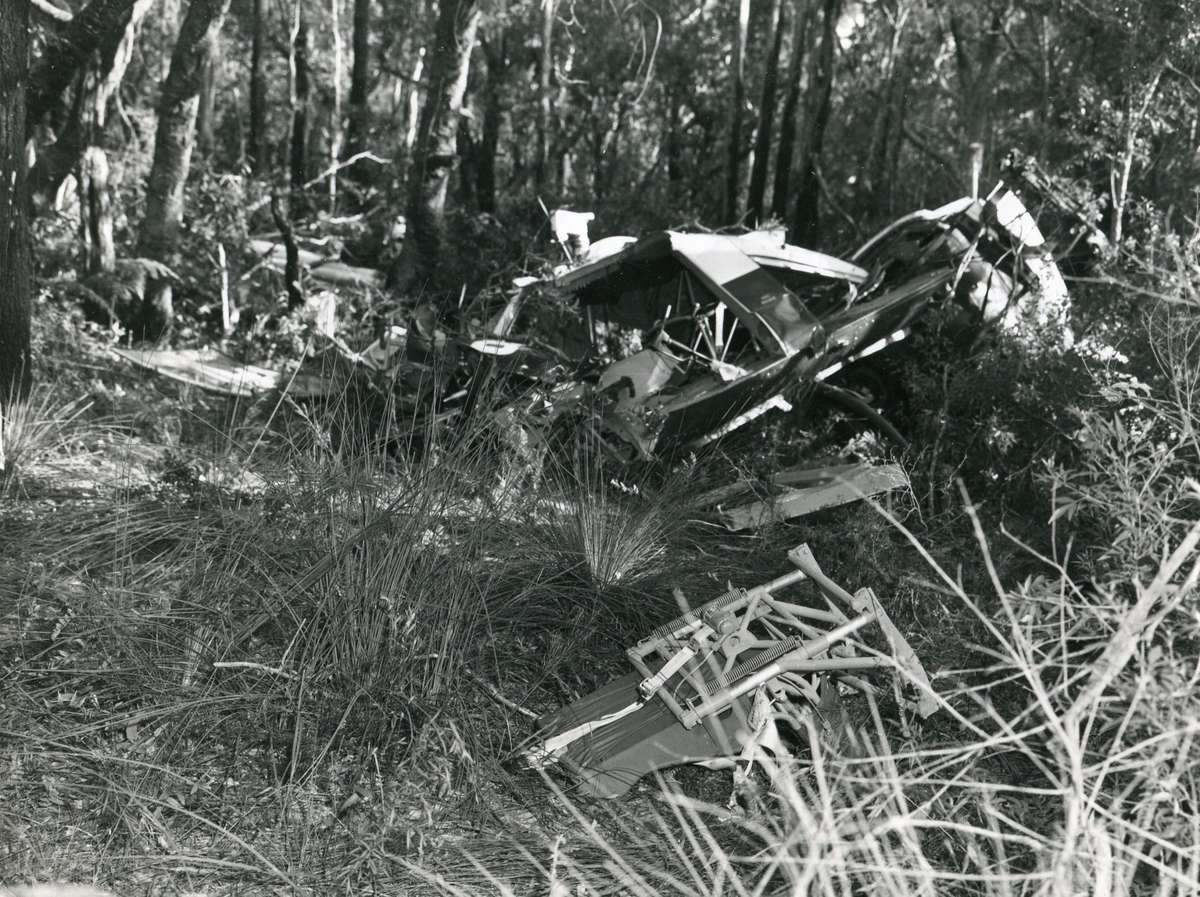 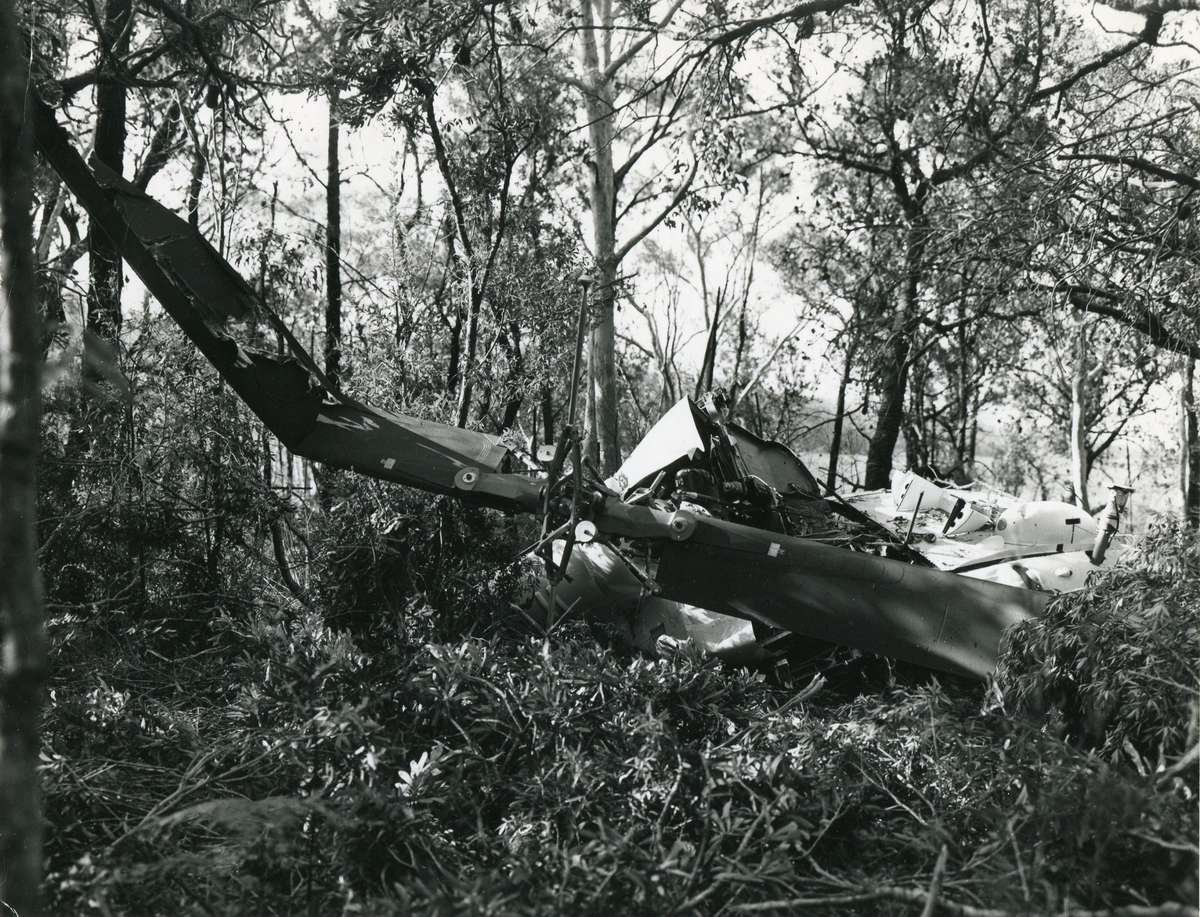 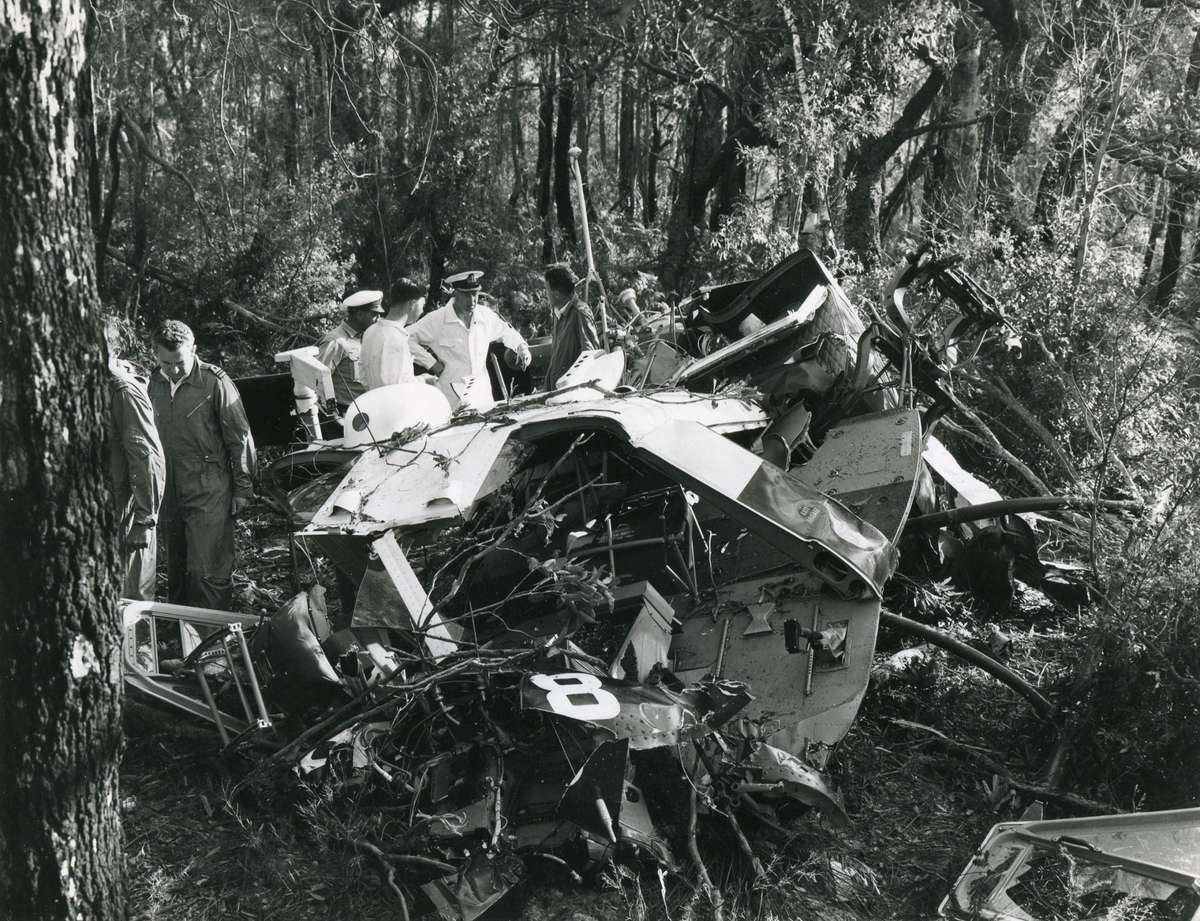 Above: Clockwise from top left:  (click on any image once or twice to enlarge).
(1) Destruction of the aircraft was almost total. Here, the Main Rotor Gearbox has almost separated from the cabin structure and lies at an angle on the LHS of the image. The winch assembly can be seen in the foreground, with the cabin collapsed sideways and the floor canted sharply downwards. Neither pilot’s seat appears to be in the aircraft, although the instrument console can be seen in the centre.
(2) The inverted instructors’ seat is in the foreground, giving an indication of how far he was thrown from the aircraft.
(3) The rotor blades remained attached to the mast but were severely damaged by impact through the trees and subsequently with the ground.
(4) Taken from in front of the aircraft nose reveals the extent to which the cabin collapsed. The instructor’s seat was ripped out and projected forward : the vacant space where it once sat can be seen, with the Collective Lever in the fully raised position.

Below: General view of the wreckage, with the nose on the left. The pilot’s collective can be seen in the fully raised position. 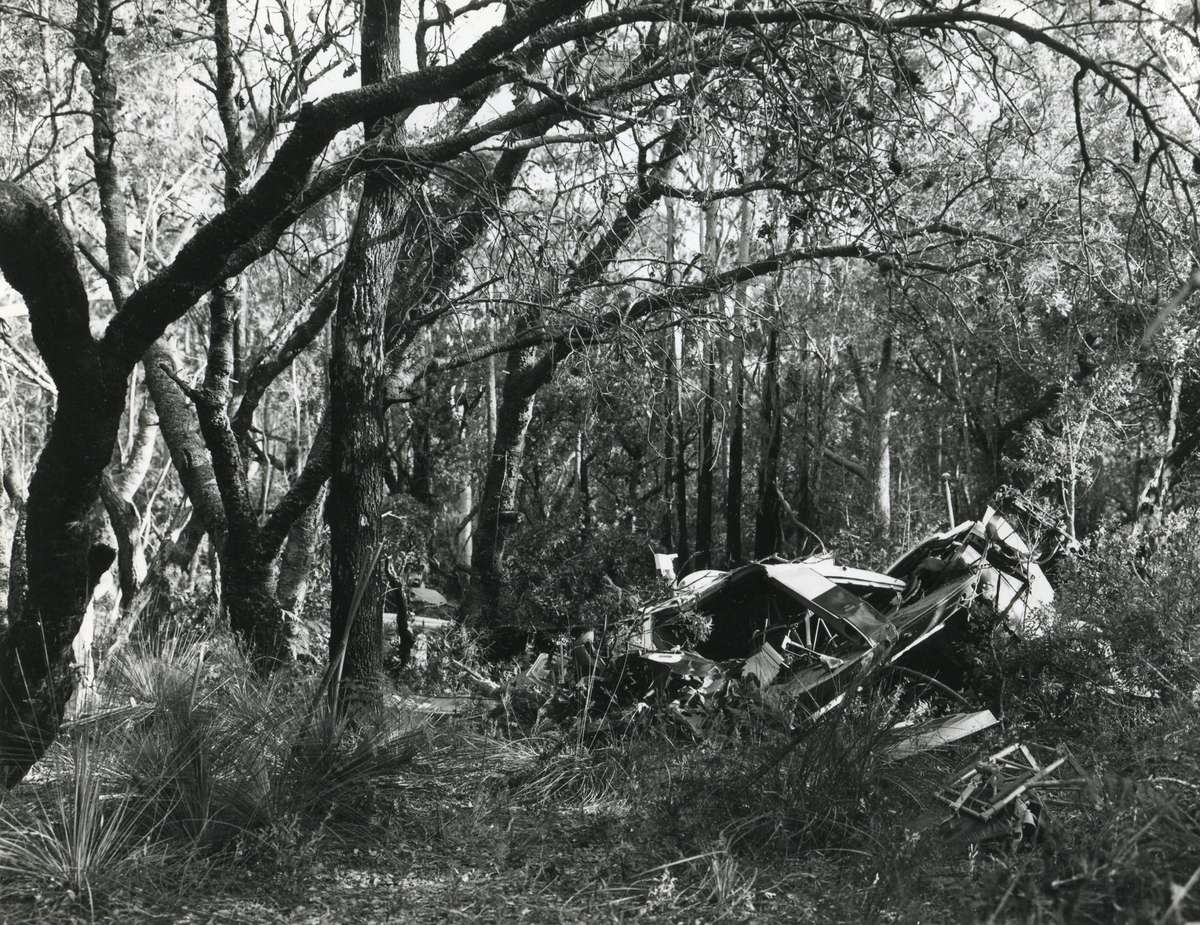 The RAAF DFS investigation found that there was some doubt about who was actually at the controls at the time of the accident, either the instructor doing (a poor) demonstration or the student handling the situation poorly (the instructor was gravely injured and suffered from retrograde amnesia). However, from the evidence the pilots did give, it was agreed that when it became clear that the aircraft was not going to make it to a safe landing area a power recovery was attempted. But application of throttle provided no response and with no power available there was a belated attempt to increase speed and increase collective to clear the trees but it was just too late. In retrospect the instructor feels he that perhaps he should have flared and had a zero-speed descent into the trees as it would have been less painful! But that is with over 50 years of hindsight.

The RAAF investigation found that the instructor had been the pilot flying and that the accident was caused by either:

Note: During a later investigation of an Iroquois ditching in Jervis Bay it was discovered that the RAAF had experienced a small number in inexplicable failures of the Hamilton Standard FCUs to provide power on demand only to “clear” themselves when next tried. Moreover, when bench tested the units tested serviceable. The reason for these events was never discovered.

The instructor’s injuries were numerous. Apart from lacerations he had fractures of both femurs (one compound and comminuted), one hip, one knee, one elbow, a dislocated shoulder and in later years it was discovered he had also cracked a vertebra in his neck. He was in Balmoral Naval Hospital as an inpatient for 10 months followed by attendance as an out patient for a further few months. A medical board restored his A1 medical category on the morning of 3rd March 1966 and with the very active assistance of the Director of Officers Postings (CAPT D.A. Clarke) he was at Nowra that afternoon and flying the next. He then regained his fixed wing A2 instructor category and instrument ratings again becoming an IRE and also flew the Iroquois again.

In late 1966 he was posted to the UK to attend the Empire Test Pilots School (1967 FW Course) at Farnborough and graduated with distinction. He then had a brief tour as a flight test instructor at USNTPS before returning to Australia to be OIC AMAFTU and its first test pilot.

MIDN Macey left the RAN a short while after the accident and had a successful career with TAA.