Related PTA - JINDIVIK Articles
Back to Heritage Index
Back to Our Heritage: Pilotless T..

The Jindivik was a target drone developed as a result of a bilateral agreement between Australia and the UK regarding guided missile testing. While the UK provided the missiles, Australia provided test facilities, such as the Woomera Test Range. As a result of the agreement, Australia gained the contract for developing an unmanned target aircraft capable of a 15-minute sortie at 40,000 ft. 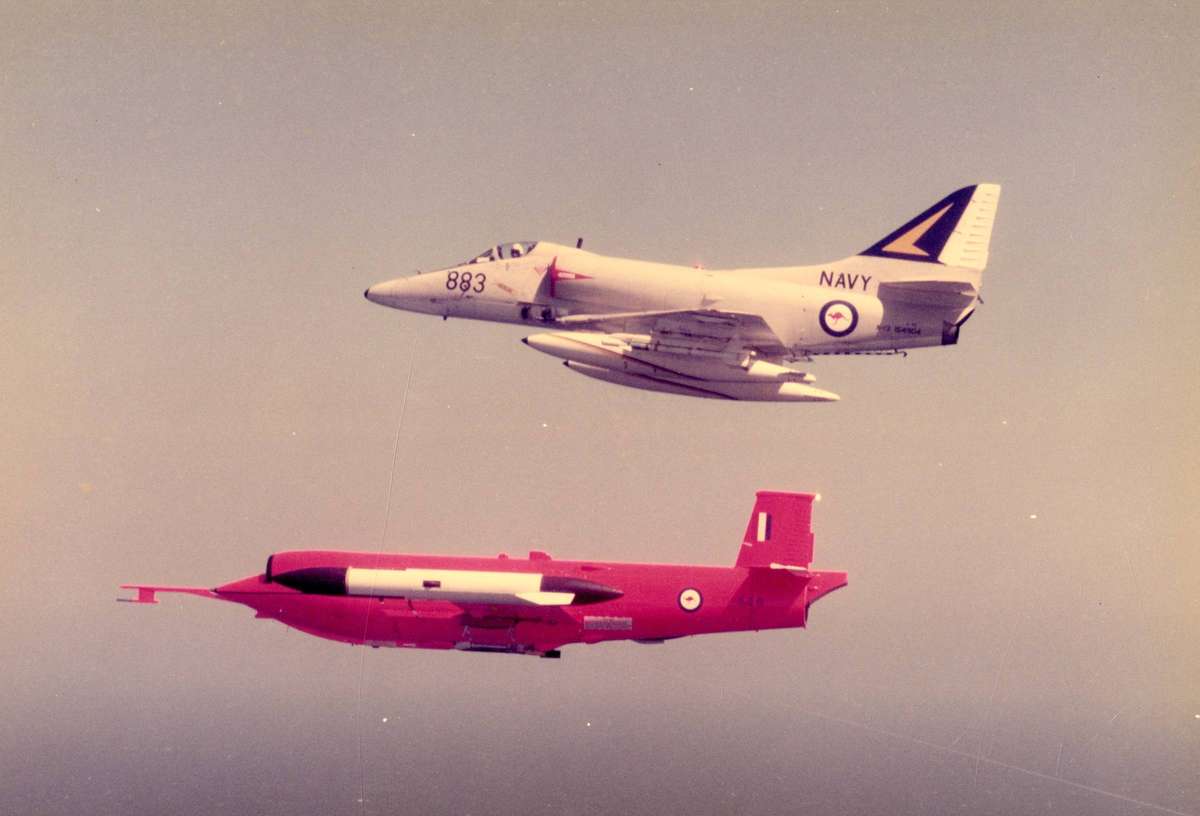 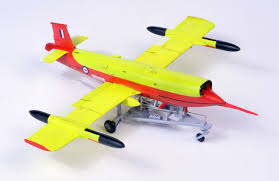 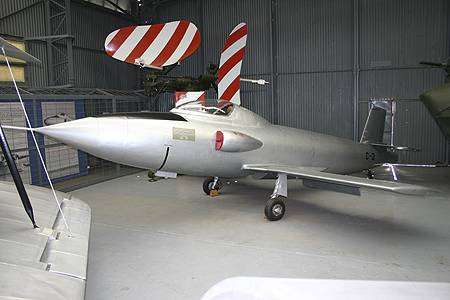 GAF Pika displayed at the RAAF Museum at Point Cook.

The Pika first flew in October 1950 from Woomera airfield. Known initially as Project ‘C’, two Pikas were built and logged over one hundred flying hours in testing. To date the only Australian designed and built manned jet aircraft, only one survived (A93-2 in the RAAF Museum in Point Cook) which ended its flying career in June 1954.

The Pika was powered by a single Armstrong Siddeley Adder turbojet, and had a maximum speed of over 755 km/h. Differing from the Jindivik in its engine intakes, undercarriage and cockpit, the addition of the pilot reduced the fuel load available for the aircraft, reducing its endurance to around 30 minutes. In addition, the aircraft could be both flown by the pilot or a ground station and provided excellent training for operators of the subsequent Jindivik with the added safety net of a pilot in the cockpit. Although the Pika suffered several minor accidents, the trials were a success, and among other results, proved that the Jindivik design did not require a rudder, saving cost and weight. 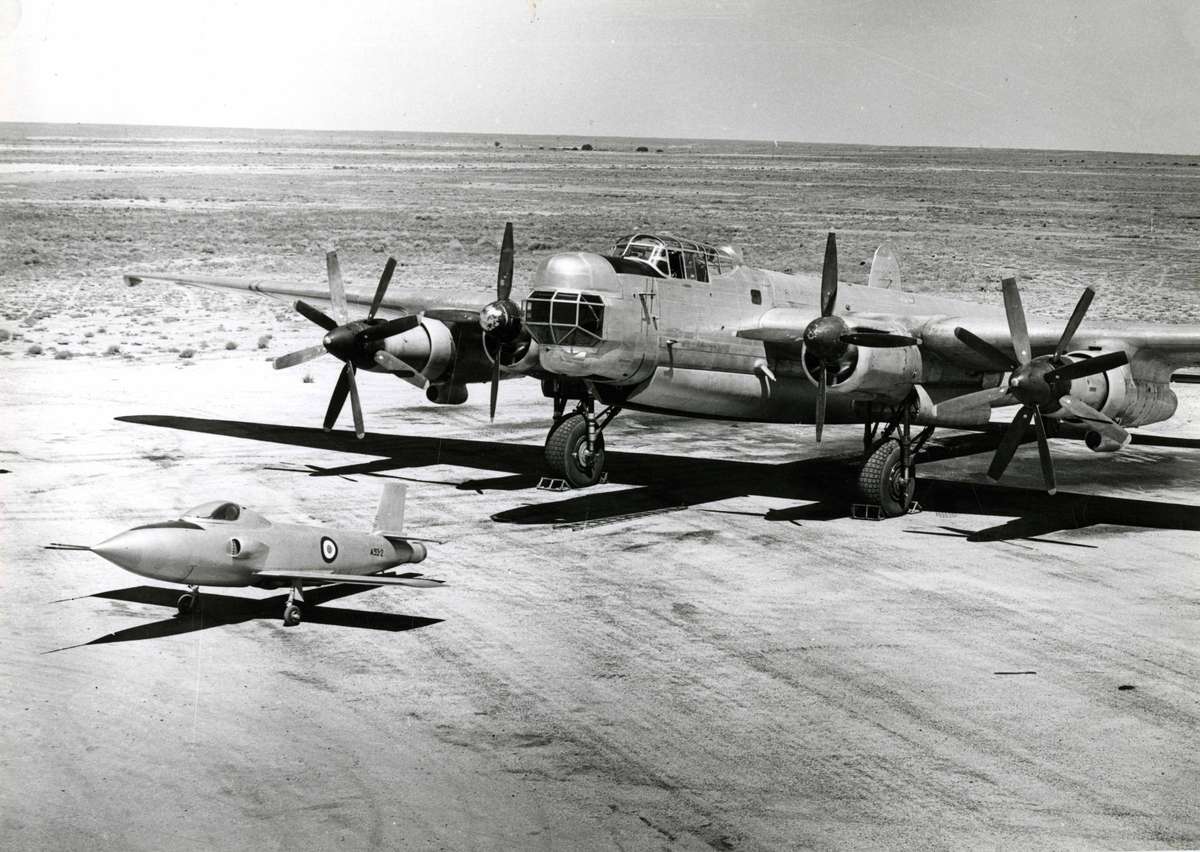 Above: A rare photograph of two test aircraft at Woomera, sometime between 1951 and 1954.  The second of the two Pikas can be seen in the foreground.  Below:  Pika C2 with one of the first Jindiviks. (Photos:  FAA Museum) 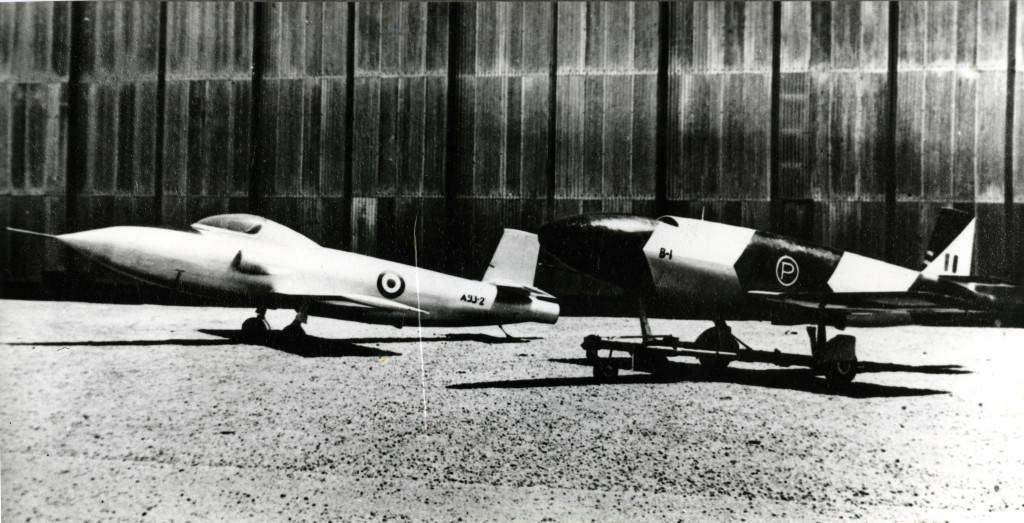 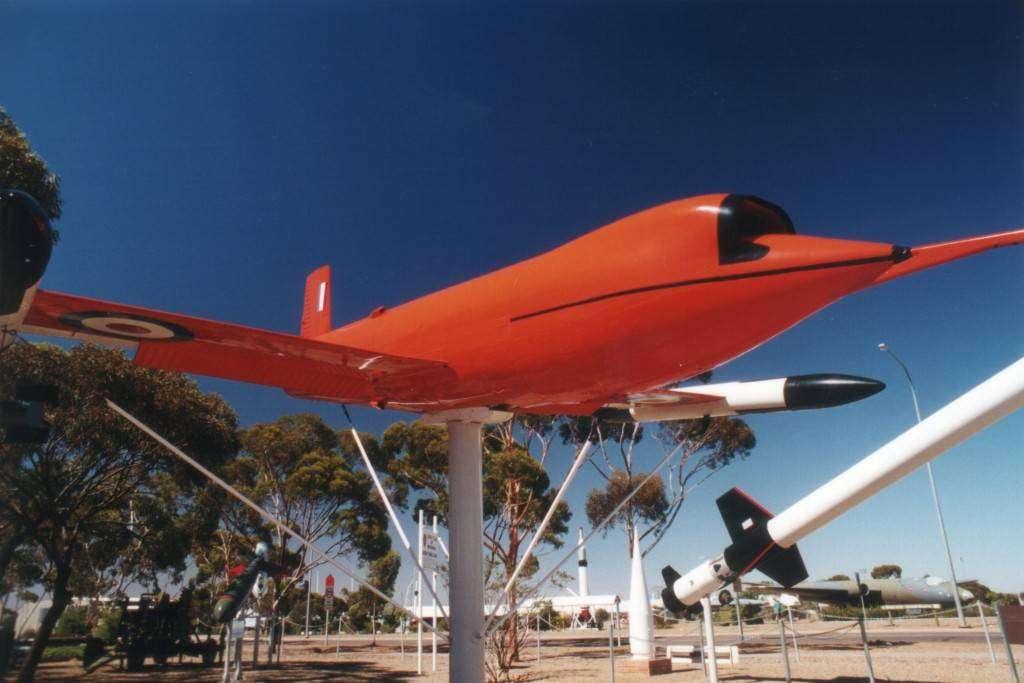 The Jindivik (the Aboriginal word for ‘hunted one’) followed the same basic form as the Pika except it had a single skid instead of an undercarriage and a dorsal air intake located where the Pika’s cockpit was. The Jindivik Mk.1 was powered by an Armstrong Siddeley Adder (ASA.1) turbojet, which had been developed as a disposable engine for the project. Only 14 Mk.1s were ever made.

The Mk.2 was powered by a 1,640 lb Armstrong Siddeley Viper engine. This engine was designed for a short lifespan – about 10 hours, but a “long life” version was also produced for conventional aircraft.

The control systems were manufactured by various firms including Elliott Brothers, GEC and McMichael, with assistance from the Royal Aircraft Establishment. Control was maintained through an autopilot that received radio commands from the ground, rather than direct flight by a ground controller. Eighteen commands could be issued to the autopilot with six further commands for the operation of other onboard equipment. The drone was launched via a self-steering trolley. At 110 knots, the drone applied its flaps, pushed the elevators up and released from the trolley. Landing was made at 150–125 knots. Two controllers (azimuth and elevation) were used to align the drone on the runway. On landing it touched down on its skid and banking would cause the wingtip “shoes” to touch the runway, which controlled its path down the runway as it slowed. 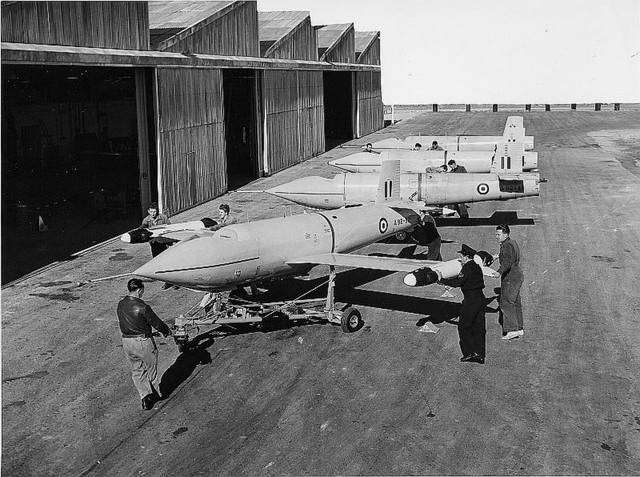 Between 1952 and 1986, a total of 502 aircraft were built by the Government Aircraft Factory in Melbourne for use mainly by the RAF, RAAF and RAN, although a small number also went to Sweden and the USA. 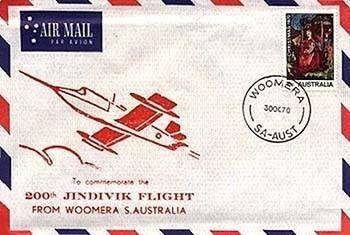 The RAN operated a total of 42 of the Jindivik Mk.203A & B series target aircraft from 1966 until 1998. These were based at Jervis Bay Range facility and were used for live missile and gunnery practice. Its major role was crew training, mainly with Seacat and Tartar missiles, but also for Sidewinder air-to-air missiles carried by the RAN’s Skyhawk jet fighter-bombers. Elusive and fitted with counter measures it could effectively simulate an enemy missile or aircraft attack.

Originally designed as an expendable target the Jindivik’s features and reliability enabled it to fly many times without being destroyed. It had an excellent speed and high altitude performance; including low-level flight over the sea, and could trail smoke, also tow IR/RF decoys and flares to avoid destruction during live firings. 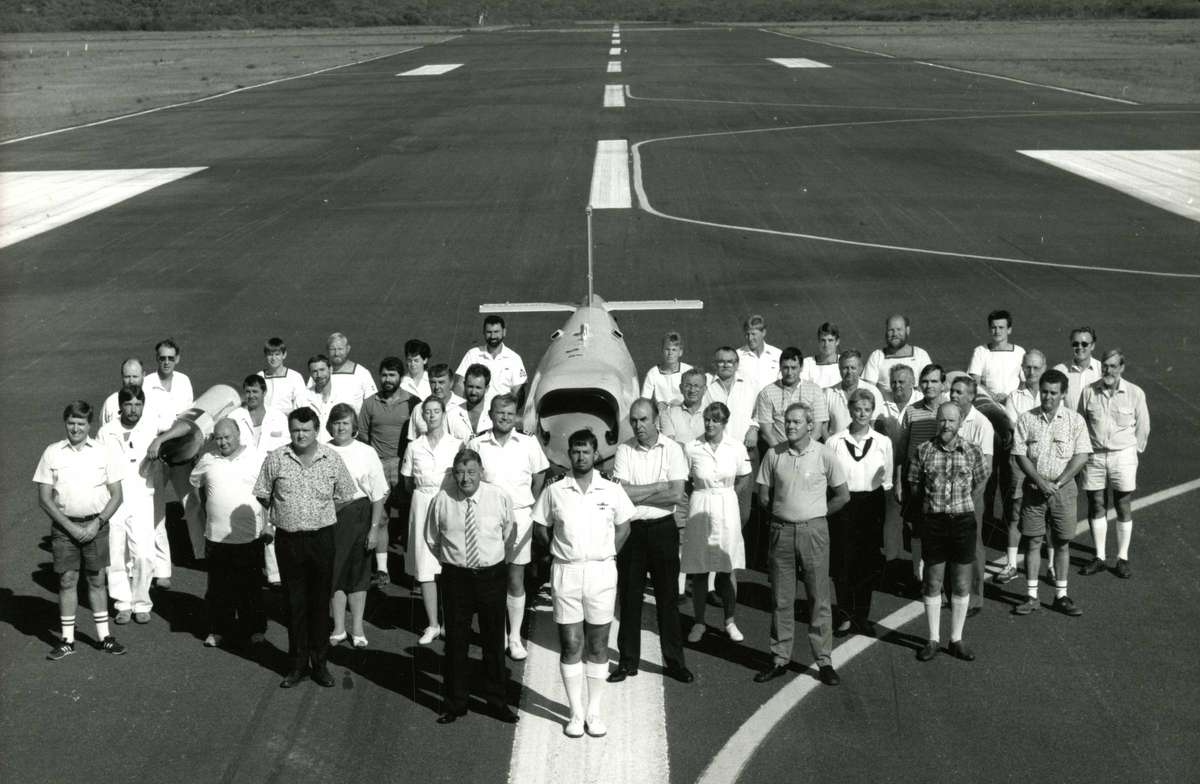 Above.  The Jindivik Team – date unknown.  Below: Preparing an aircraft for flight. (Both photographs courtesy of FAA Museum) 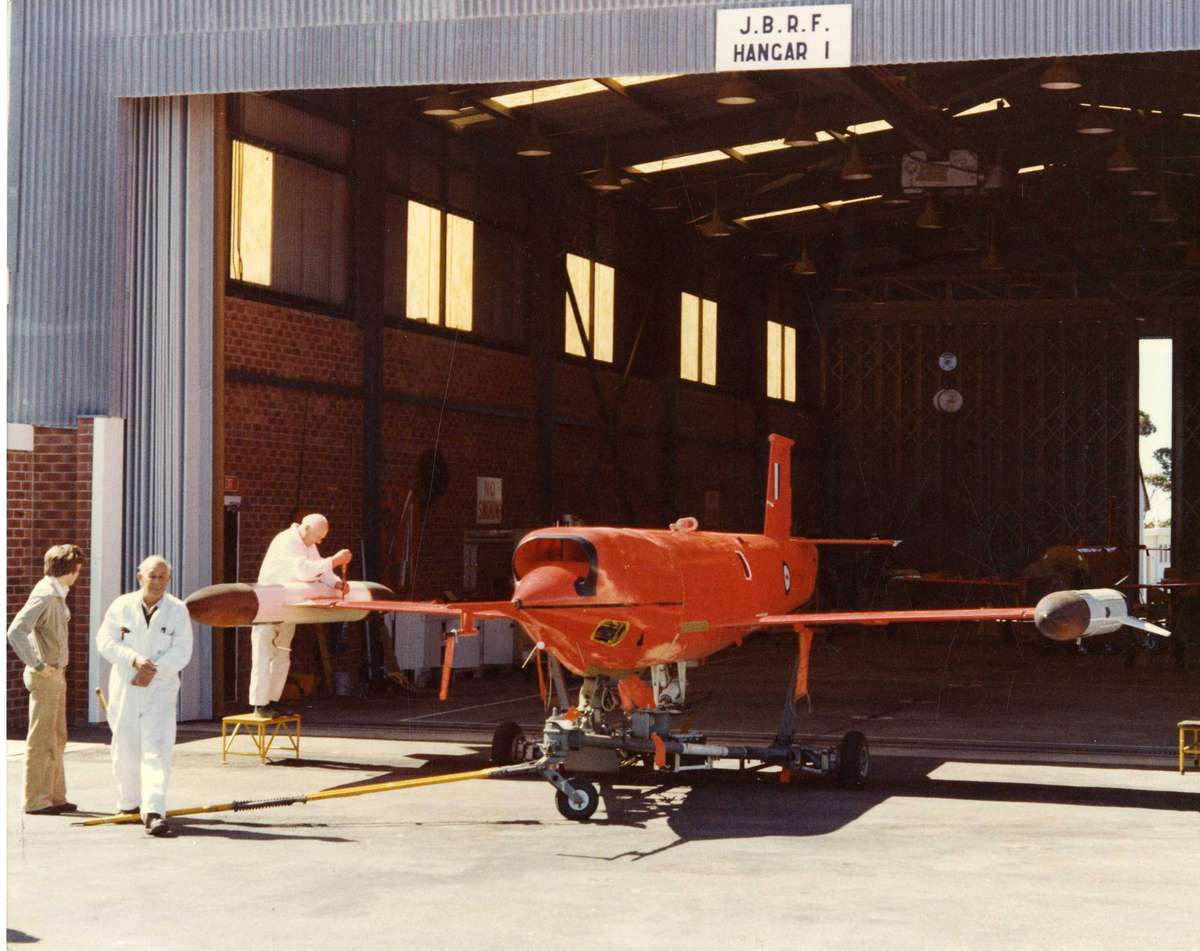 In the early 60’s work commenced on a replacement for the Jindivik to be called the Turana.  Designed as a derivative of the Ikara anti-submarine missile, the project failed, however, and the Jindivik soldiered on until 1998 when it was finally replaced by the BAE Kalkara unmanned aerial target.

The RAN operated a total of 42 of the N11 Jindivik Mk.203A & B series target aircraft from 1966 until 1998. These remote controlled target aircraft, based at Jervis Bay Range facility, were used for live missile and gunnery practice. Manufactured by the Government Aircraft Factory, Melbourne, the Jindivik was originally designed for the British Ministry of Supply. Its performance and reliability led to large orders from Australian and the U.K., with small numbers exported to Sweden and the USA.

Jindivik is the Aboriginal word for ‘hunted one.’ Its major role in the RAN was for crew training, mainly with Seacat and Tartar missiles, including the RAN’s Skyhawk jet fighter-bombers using Sidewinder air-to-air missiles; also with RAAF Mirage jets firing Matra and Sidewinder missiles. Elusive and fitted with counter measures it could effectively simulate an enemy missile or aircraft attack.

Jindivik operated via a radio link from a control centre and was launched from a runway, from a steerable trolley, and returned to land on a retractable skid. Originally designed as an expendable target the Jindivik’s features and reliability enabled it to fly many times without being destroyed. It had an excellent speed and high altitude performance; including low-level flight over the sea, and could trail smoke, also tow IR/RF decoys and flares to avoid destruction during live firings.

In 1998, after 32 years in service, the RAN withdrew the Jindivik – replacing it with the BAE Kalkara unmanned aerial target.