Related PTA - Radioplane Articles
Back to Heritage Index
Back to Our Heritage: Pilotless T.. 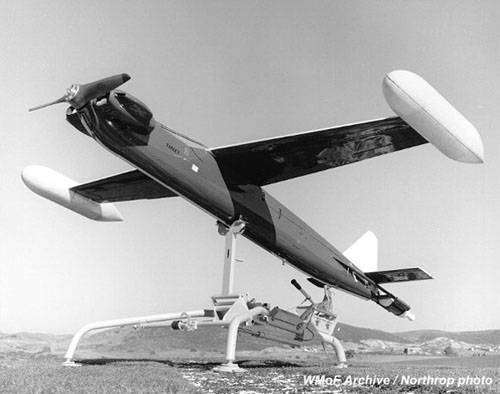 Radioplane built a series of unmanned target aircraft, of which the ‘Shelduck’ Radiophone was one. Design of the Shelduck began in 1946, with first flight in 1947. It was powered by a flat-four four-stroke McCulloch piston engine with 95 horsepower. Specifications were:

Over 60,000 Shelducks of all derivates were built in all, and the type has been used by at least 18 nations internationally. 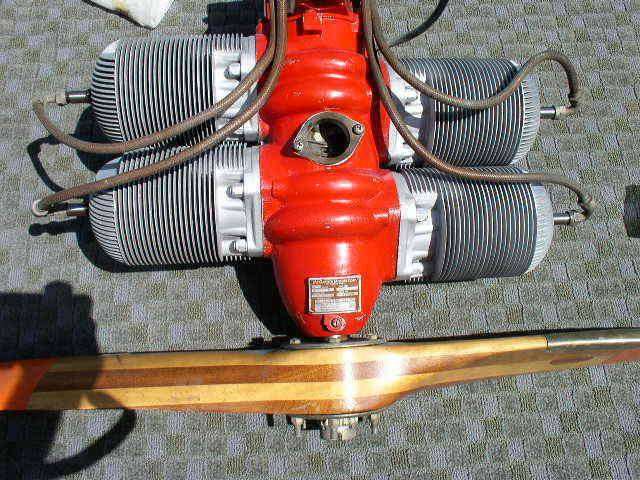 In 1962 ten Northrop Radioplane KD2R5 target drones were ordered by the RAN for delivery in 1963. They were acquired for training operators of the ‘Seacat’ close-in anti-aircraft surface-to-air missile and gunnery practice. Built by Northrop in the US, the ‘Shelduck’ Radioplane could perform conventional flying manoeuvres, including simulated attacks on ships, eliminating the need for a towing aircraft. A total of 54 ‘Shelducks’ were used by the RAN.

Powered by an air cooled, flat-four McCulloch piston engine, driving a two blade propeller, it was radio controlled with a maximum speed of 370 kph (230 mph), and an endurance of approximately 1 hour. Wingspan was 3.5 metres (11 feet 6 inches); length 3.85 metres (12 feet 8 inches); height 76 cm (2 feet 6 inches). The launching system was from a stand using a bungee catapult or rocket. Recovery was via a parachute.

During early trials in June 1964 a ‘Seacat’ fired from HMAS Derwent successfully hit a Radioplane launched from HMAS Anzac. 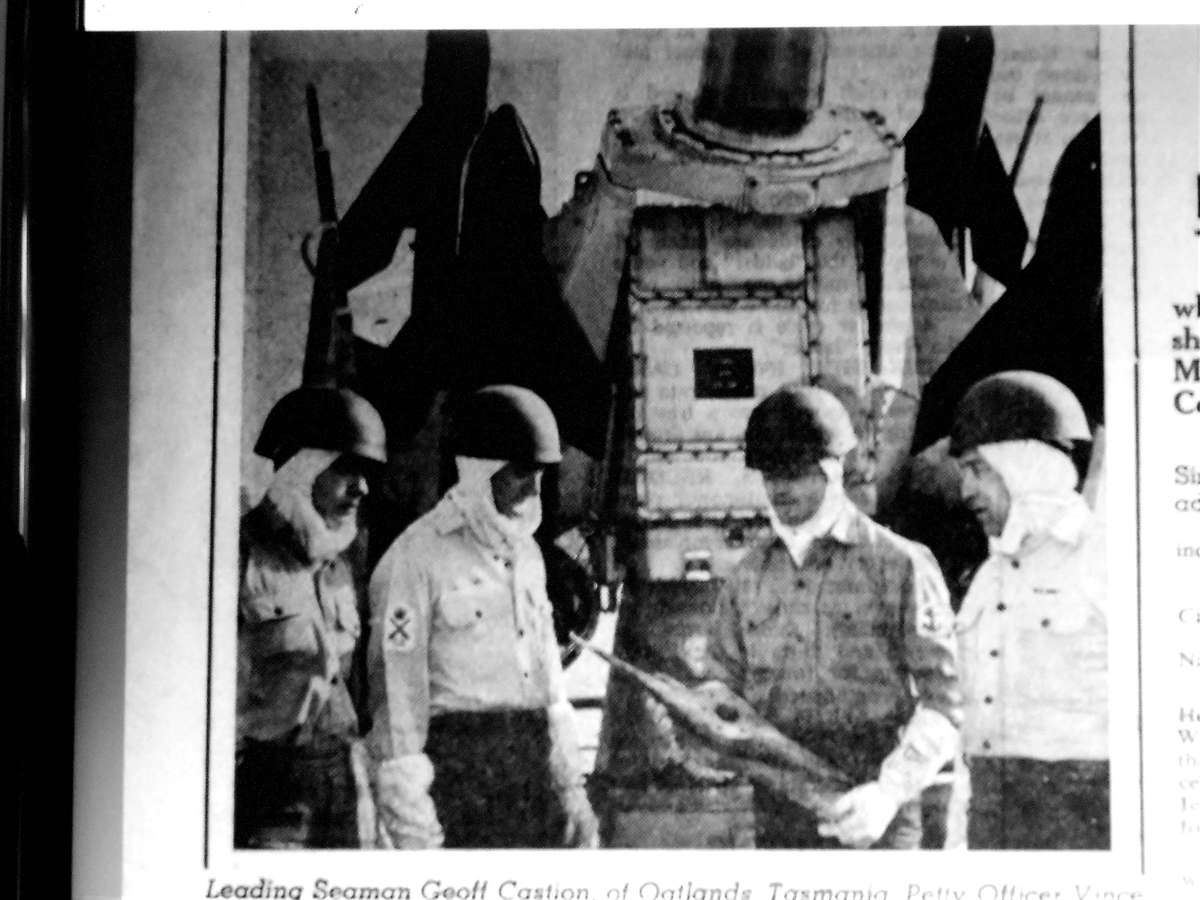 Above: A photo from ‘Navy News’ dated 10 July 1964, featuring the Sea Cat crew on HMAS Derwent with the propeller of the ‘Shellduck’ they shot down.

The Radioplane drone had a relatively short service life with the RAN as it was soon replaced by the Jindivick pilotless target drone.

The following letter from Don Roberts appeared in the June 2017 edition of “Slipstream” magazine:

“I refer to the article mentioned on p44 regarding the PTAs. All I ever see is about the Jindivik, and nothing about the KD2R5 being operated from on board ships at sea. I was on that unit for almost 5 years.

The Jindivik always operated from J.B. Range, while the PTAs operated from ships at sea, providing targets for both AA training and Sea Cat operations. I was the CPO of the unit from the end of 1965 until paid off in February 1970. But I can never find a reference to that unit.

I can remember one year in which we did more sea time than the Squadrons and yet that unit is never mentioned in any way! I suppose that is because it consisted of only one officer (the controller) and six various personnel being: 1 CPO A/E, 1 Radio PO, 1 Radio J.R., 1 PO Electrician, 1 Armourer, and 1 Aircraft Handler (as driver).

We operated from almost every type of ship, including the old carrier HMAS Sydney, but did not operate from any of the DDGs as there was not enough room for our operations. Maybe we were one of the forgotten units?”

We contacted Don and asked him for more information and this is his reply:

“As you are probably aware the KD2R5 was an American produced target, radio-controlled aircraft. I forget the exact dimensions but was approximately 15-foot wingspan, and was powered by a flat 4-cylinder two stroke McCulloch engine of (if my memory serves me correctly) some 1600 cc’s.

It had a 4-throw crankshaft, and was started using a McCullock two stroke engine starter, which plugged into the propeller boss of the aircraft. The unit Petty Officer stood in front of the wing and controlled the mixture for starting, and adjusted the RPM.

After all safety checks had been carried out, the crew Chief started the engine of the starter unit, and plugged it into the boss of the propeller. Then the Petty Officer (A/E) adjusted the mixture to start the engine and while the RPMs were increased. Once the engine had started, the starter unit was removed by one of the crew to a safe distance and the aircraft was tended by the P.O.

The Chief controlled the engine at a distance, but was guided by the P.O. as to the RPM (this was done by ear). With the engine running and the RPM properly set, and the rest of the launch crew clear of the area, the JATO was connected. The PTA launch unit was then adjusted by the P.O. so the target was elevated to the launch angle.

Once this was done the P.O. departed, so the CPO was the only person in the area. He was some 20 metres from the target aircraft, but with a clear view of the PTA and the surrounding area – in position with the launch firing unit ready to go.

All operations were done at sea on the ships capable of operating the PTAs – these were the type 12’s and HMAS Sydney and HMAS Duchess. I don’t think we operated from any other ships, although some of the type 12’s were Kiwis.

At first, when I took over, the aircraft were launched to port in our Navy; as in all others using the KD2R5. I discussed this with LEUT Churcher and we agreed it would be better to try launching to starboard due to the rotation of the prop and the tendency of the aircraft to roll to port. We had 98 successful launches to starboard.

When the Americans found out, the USS Ponchatoula paid us a visit from Hawaii to find out our success in launching. I stuffed it up when I launched off the old Queenborough. She only had one rudder and that caught me wrong footed as the ship started to ride up the wave, then the stern slid back down into the trough and the aircraft clipped a wave top some 100 metres out from the ship and pranged.

The speed of the KD2R5 was approximately 180 knots and it was fitted with a parachute for recovery, operated by the controller pressing the engine stop button on his control box, which ejected the chute and switched the engine ignition off.

The fuel tank held 10 gallons of two stroke mixture which was a 10-to-1 ratio, allowing the aircraft to fly for about 1 hour. The aircraft was NOT aerobatic, as it only had ailerons and rudder, but had a ‘hold height’ unit as part of its control system. This unit was very effective in operation with all flying done within eyesight control, as RADAR frequently ‘lost target’”. 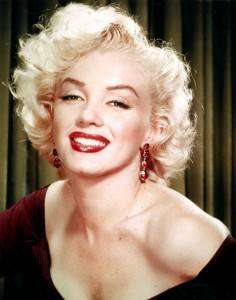 As an aside, there was an interesting connection between Radioplanes and a famous film star.  The first photograph (left) shows 19 year-old Norma Jeane Dougherty, taken in 1946 when she was an assembler at the Radioplane Company of America plant near Los Angeles. The Department of Defense sent a photographer to the factory, who spotted Norma and took her picture.  He suggested she enrol at a modelling agency, and not long after that she made her first movie.  The rest was history, as the second photograph shows.