Related Sea Venom Photo Gallery Articles
Back to Heritage Index
Back to Our Heritage: The Sea Ven..

Left: 808 Squadron pilots training on borrowed RN Mk 20 Sea Venoms in 1955/6 near Yeovilton, UK, whilst our own aircraft were being built. The RN aircraft were not fitted with ejector seats. None of the 39 RAN Mk 53 Sea Venoms ever flew in the UK during this period: they were transported to Glasgow and loaded directly aboard the newly commissioned HMAS Melbourne for passage to Australia. (Image: Michael Sandberg).

The five photos right and below show various views of the cockpit. Right: Two seats – Pilot on the left, Observer on the right. Not much room! Below, clockwise from left [1] Pilots station [2] From pilot’s seat looking right to Observer console [3] The Observer’s panel, dominated by the early radar set [4] From Observer’s seat, looking left to pilot panel.

Above: Another shot of an RN Mk 20 Venom during training in the UK. Image: Michael Sandberg.

Left: RANAMOs dictate the colour scheme of the RAN Venoms and the size and location of lettering and other markings.  Aircraft were in standard livery except for painted designs on the wing-tip tanks, that designated which Squadron they were from.

Below left: Standing Room only! Melbourne departed the UK on 11 March 1956 with 64 aircraft aboard: 39 Sea Venoms, 22 Gannets, 2 Sycamores and an Avro 707A. The Venoms were ‘cacooned’ in protective material and did not fly until arrival in Australia. The CO of Melbourne, CAPT G. Gatacre, noted that that lack of recreational space on the ship necessitated frequent stops on the journey home, including to Gibraltar, Naples, Malta, Aden and Colombo. Image: Jeff Chartier collection.  Below right:  A Venom being loaded aboard a barge in Jervis Bay, NSW, for transportation via HMAS Creswell and thence NAS Nowra 07 May 1956. Image: Jeff Chartier collection.

Right: A Venom comes to a halt after an arrestor landing aboard Melbourne. In the 1950’s it was discovered that the massive G forces from the hook’s single anchor point was causing cracking problems in the aircraft fuselage, so a “V” shaped hook was devised that was anchored to both sides (see below). Melbourne had six arrestor cables: five were relatively close together whilst the sixth was a little further forward. It was irreverently known as the “Jesus Christ wire” as it offered the last chance of being arrested. At full extension the aircraft was not far from the edge of the flight deck when six wire was caught. Image: Jeff Chartier collection.

Above: A Venom departs the catapult on Melbourne. The ship was only fitted with one cat, which slowed deck operations and, on the occasions it was unserviceable, curtailed all fixed wing flying operations. The thick diagonal line where the sailor is sitting demarcates the edge of the angled deck: it gives an impression of just how small Melbourne was, in terms of clearance between flying and parked aircraft. Below the Venom you can see the wire catapult sling about to drop free: Melbourne was later modified to capture the slings as the aircraft launched, rather than lose them in the sea. Image: Jeff Chartier collection.

Left: LEUT Barrie Daly of 816 Squadron ‘B’ Flight checks the security of the 3-inch rockets during a pre-flight inspection c.1966, prior to a catapult launch.  The rockets were unguided but were fitted with 60b HE heads and could be fired singly, in pairs, or as a salvo.  Image: Phil Thompson.

Below: A popular Flying Overall patch was that shown below.  “Ghost Riders” was not only a reference to their night flying intercept ability, but that the engine of the Venom was a De Havilland Ghost.

Below Left: A Sea Venom departs the deck of Melbourne during a ‘Touch and Go’, most probably for crew training. The chequered wing tip tanks denoted an 805 Squadron aircraft.   Image: Phil Thompson collection. Below Centre: Taken from a low perspective, the squat profile of the Sea Venom is emphasised. Image: Jeff Chartier collection. Below right: An image of HMAS Melbourne’s hangar deck occupied by Sea Venom and Gannet aircraft. The relatively small size of the ship didn’t just generate problems in operating aircraft on the flight deck: it also meant that even with two lifts, aircraft in the congested hangar space frequently had to be ‘shuffled’ depending on which were serviceable and which were not.

Below.  An unusual. shot of the radar installation in a Venom nose.

Below.  Venom WZ894 undergoing maintenance at Albatross. This particular aircraft was to crash in May of 1959 after suffering an engine failure over Jervis Bay.

Below.  A dramatic series of five photographs that show what can go wrong, and how quickly.  During the work up for pilot DL qualification this Venom got into the funnel smoke of Melbourne on late finals. The “gate speed” for the deck was 114–118 knots, but it the aircraft was at 115KTS when it went into the hot smoke, and it literally thundered onto the deck at 105KTs – one small knot above stall speed. As it hit the deck, the Observer recalls thinking that unless the Venom hit the deck again to arrest the rate of descent after the initial bounce, it was going to be ugly. He went for the canopy jettison as the anchor flashed past but with a bit of free air the aircraft was able to climb away to live another day. FLTCO reportedly suggested that the pilot “Don’t do that again!” The photos came from stills off the cine camera that recorded all landings, and were forwarded via Max Speedy. 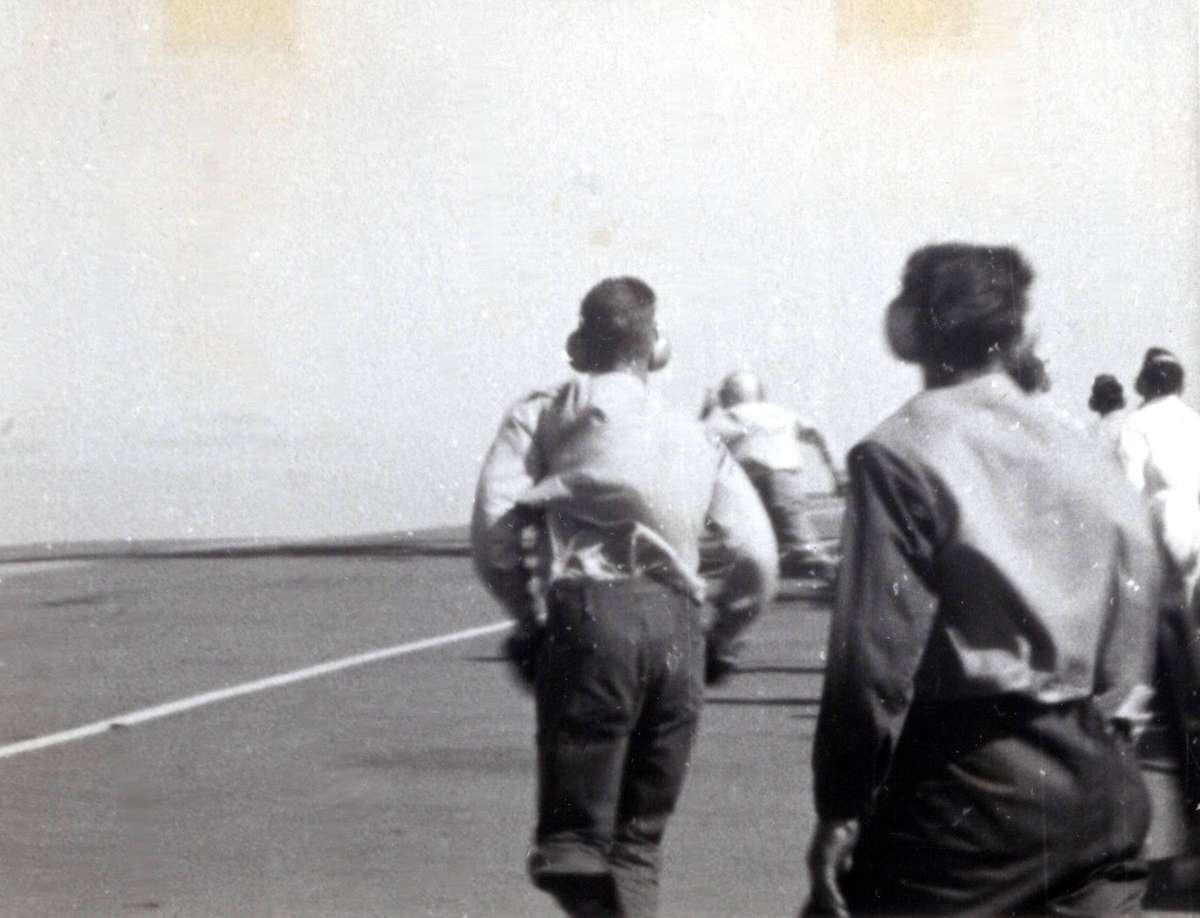 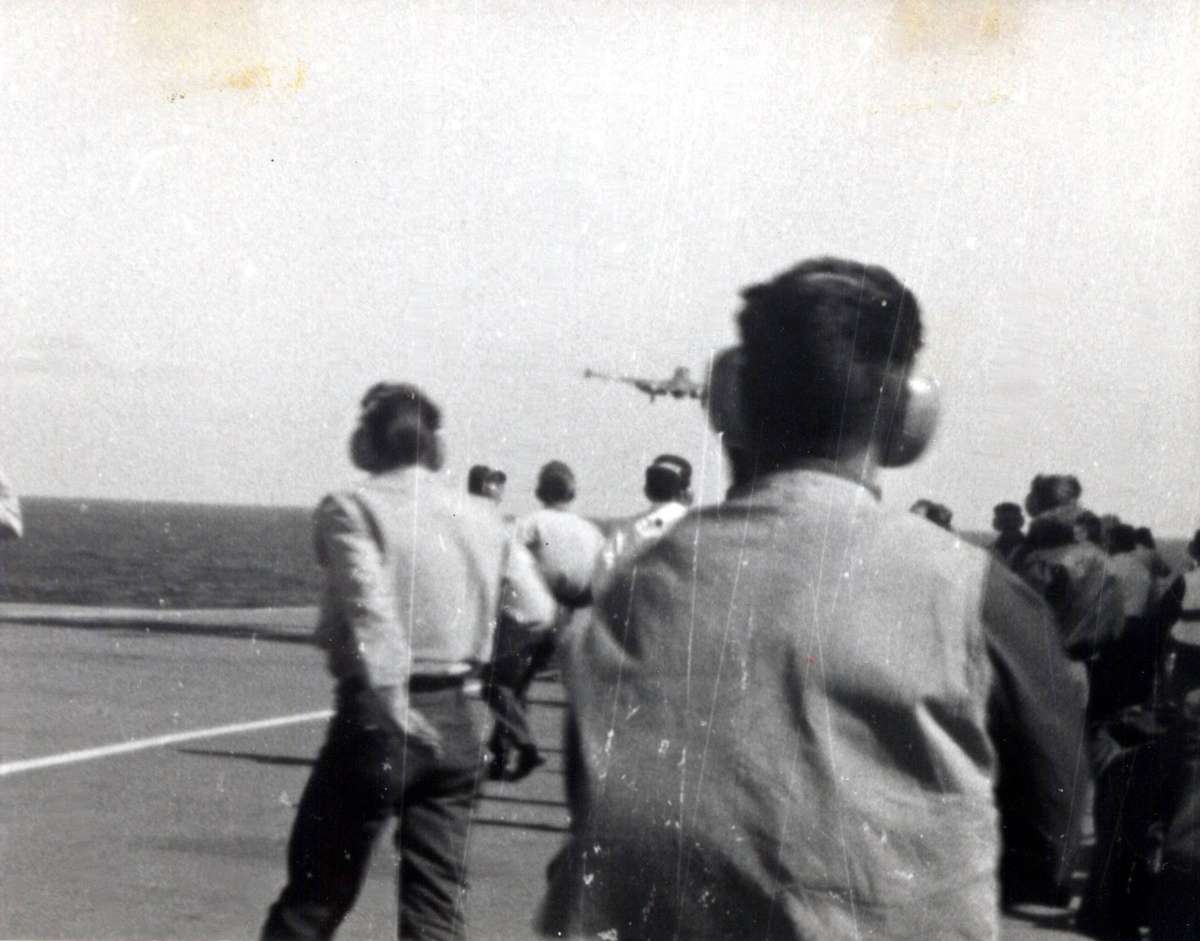 Above: Venom WZ900 being refuelled at NAS Nowra with a Gannet taxying in the background.  Note the ROTAX cartridge on the port wing of the Venom in the foreground.  WZ900 ditched in February 1956 when an arrester cable failed on HMAS Melbourne.  The pilot, LEUT J. Dacosta survived but LEUT E. Kennell, the Observer, did not.  (Jeff Chartier collection). More Information

Below:  An article from the Navy News edition of 22 August 1958 on the maintenance of Venoms at the HdH factory at Bankstown.

Below: A funeral service held aboard HMAS Melbourne for the late LEUT Potts(P) and Thompson(O), who lost their lives when Venom WZ933 crashed into the sea on launch, near Hervey Bay on 08Aug56. The ship hove to and two crosses were delivered into the sea by the Padre, in a very moving ceremony.  The incident resulted in the Venoms being grounded and offloaded, with the ship then proceeding to SEATO with Gannets for the remainder of the exercise.  Words and image provided by Kevin Duffey.

Below: An interesting 1961 image of Sea Venoms taxying forward to the catapult at night, taken with time lapse (Ron Marsh)

Below.  One of the few remaining RAN Venoms (WZ944)  in its new life in Utah, USA, where it has been restored to flying status by Ultimate Aviation.  Regrettably it is in RN livery, but is nevertheless a good news story.  Images courtesy of “Flightpath” magazine (Vol 28 No 4). 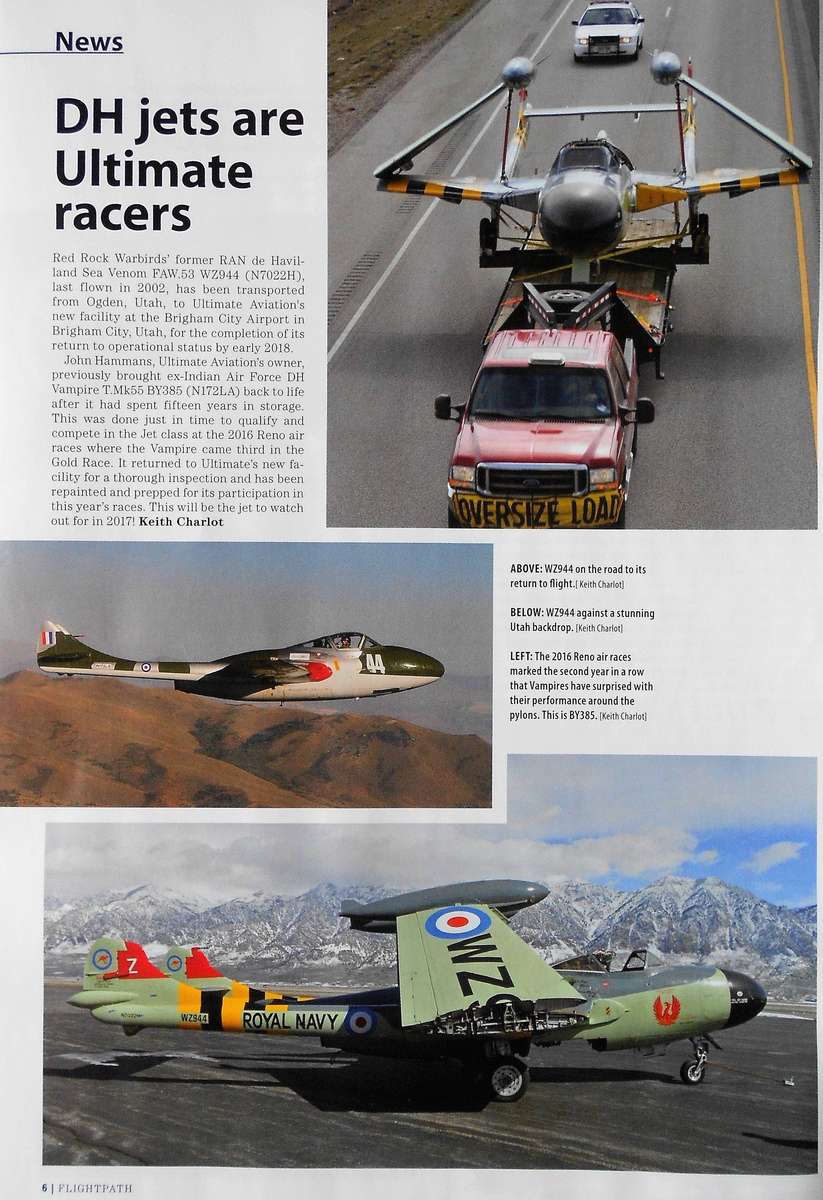 Left. Precious pieces.   When the Historic Aircraft Restoration Society (HARS) bought the remnants of the Naval Historic Flight at the end of 2018,  pieces of Sea Venom WZ895 were included, stored in two containers.   HARS began piecing it together and the image shows their progress by June 2019 – still a long way to go, but starting to look more like an aircraft than a carpenter’s waste bin.  It is hoped to restore the airframe to static display condition.  (HARS image).   Below. One of the other surviving RAN Venoms was housed  in the Classic Jet Fighters Museum but was recently sold to an unknown owner. See here for update.