Below. Two shots of the first Seagull III for the RAAF, taken in 1926.  On the left the aircraft is rolled out of the Supermarine works in Southampton, in the UK.  On the right.  Deployed on the water for the first time.  (AWM images).   Supermarine was set up in 1913 to produce seagoing aircraft, amongst which was the Seagull.  It was acquired in 1928 by Vickers-Armstrongs although Supermarine continued to build and trade under its own name.  The company was to achieve immortality with the design of the Spitfire which went into production just prior to WW2 and became one of the mainstream fighters of the war.  Other types included the Sea Otter (1938), the Attacker (1946 – the Royal Navy’s first jet fighter); the Swift (1951) and the Scimitar (1956), amongst others.  In the shakeup of British aircraft manufacturing in 1960, Vickers-Armstrong became a part of the British Aircraft Corporation and the individual heritage manufacturing names were lost.  This politically inspired merger was to sound the death-knelll for the British aviation industry, which was never to recover its former glory. 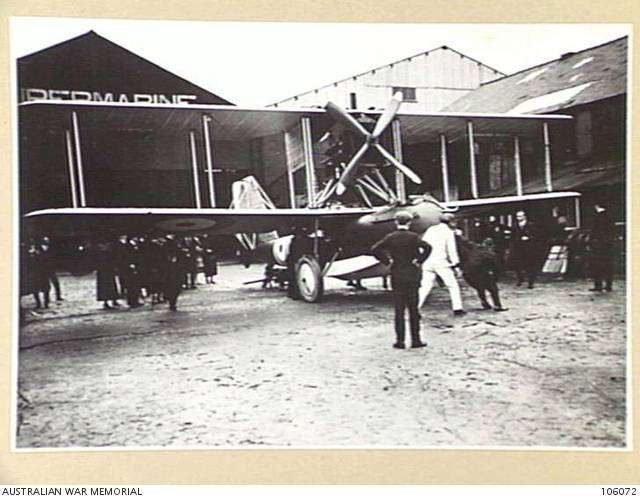 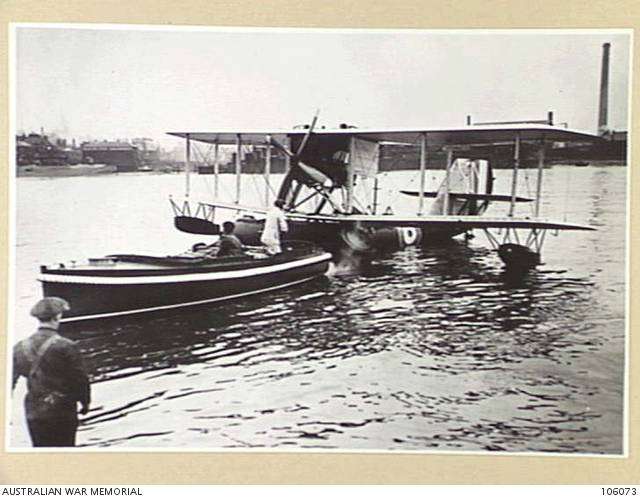 Below.  The remains of Seagull at the solent Sky Museum in Southampton, UK (where the aircraft were built) gives an idea of the intricate construction of the aircraft, which was made almost entirely of wood.  This is the nose section which was rescued in 1974 having been used as a garden shed for over forty years.  Image: ‘Seawings‘.   The wood proved to be a major obstacle to the maintenance of the aircraft, particularly in the tropics where heat, humidity and marine fouling proved fatal to wood laminates and their bonding. 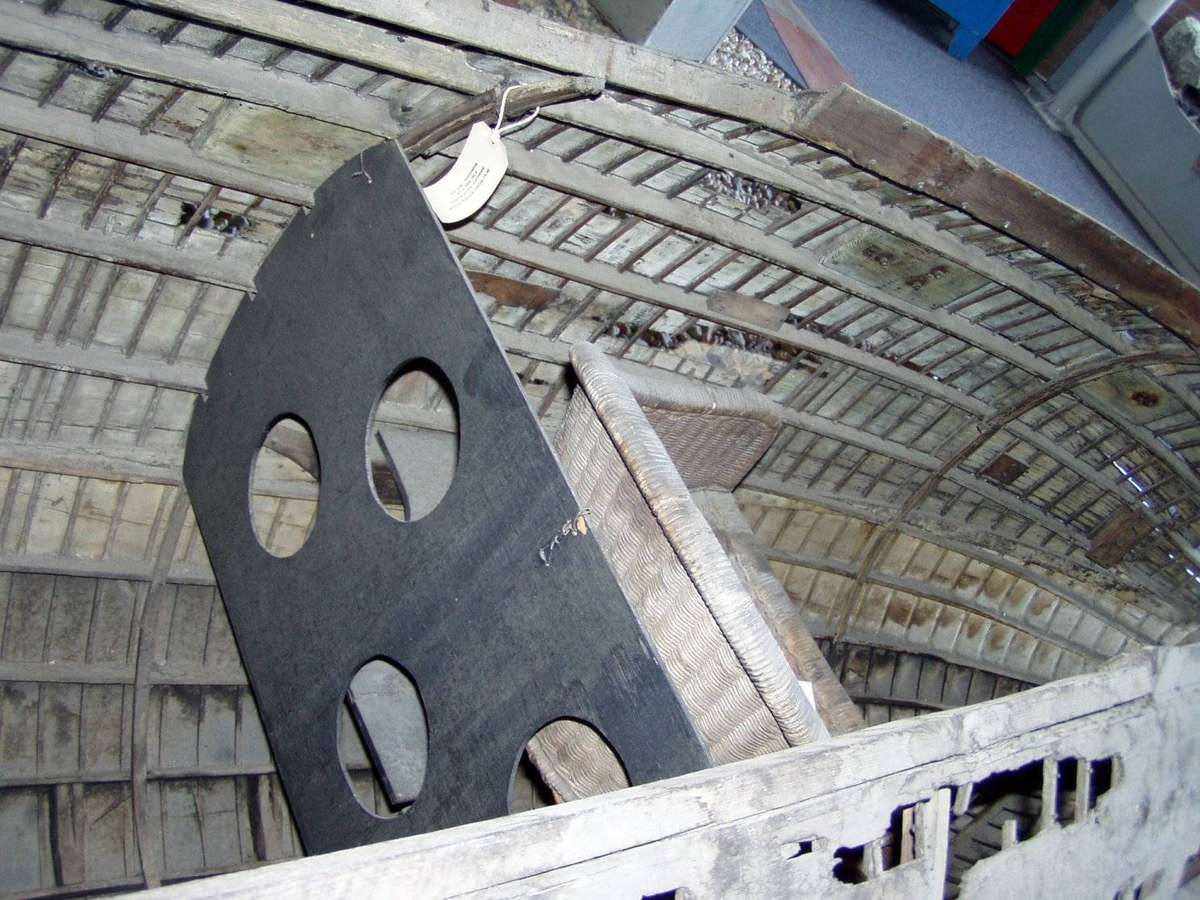 Below left. A good photograph of a Seagull III at mooring, with engine cover on.  The four bladed wooden propellor was perilously close to the forward crew position.  The stepped hull can also be clearly seen, which aided the aircraft on take-off.  Below right.  This Seagull III was badly damaged when it detached from its mount during a storm near Bunbury, WA. 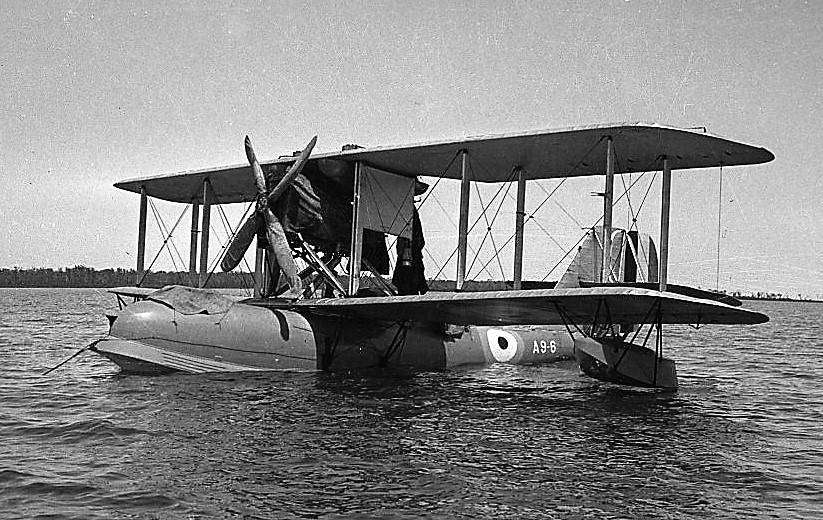 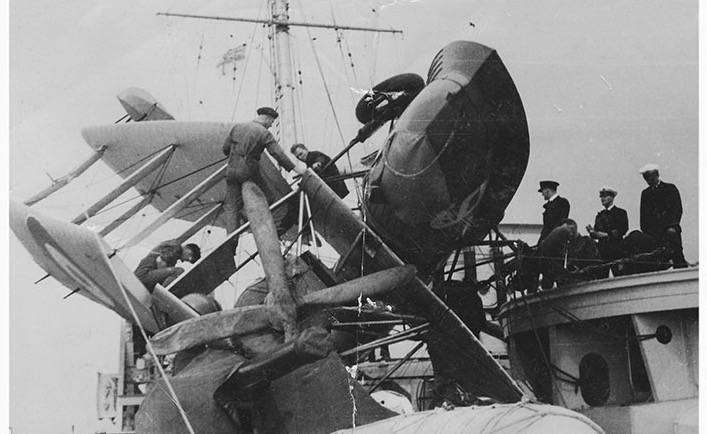 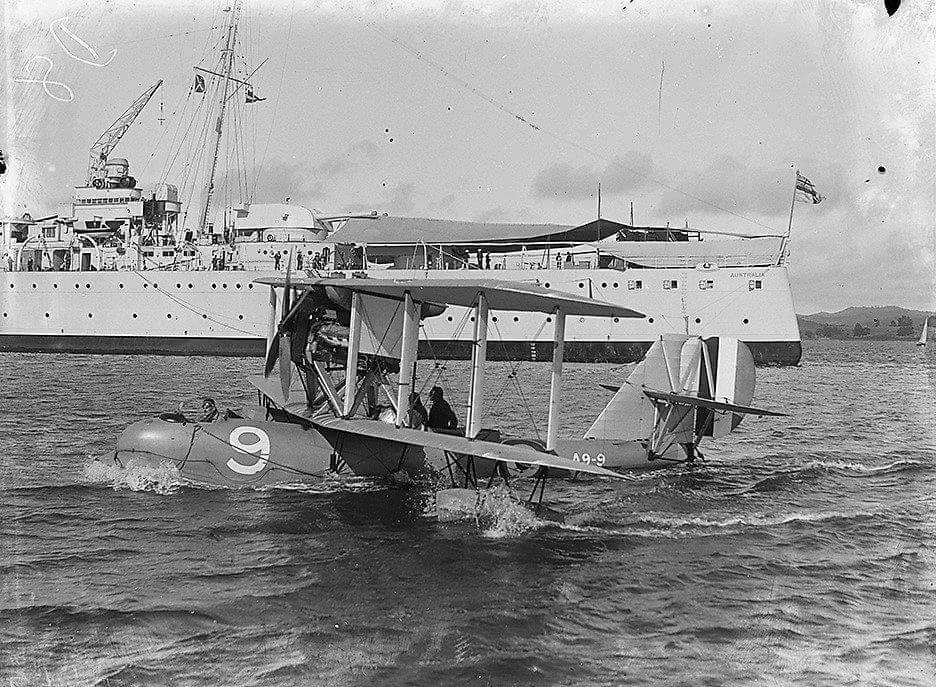 Above:  A beautiful shot of A9-9, most probably in Sydney harbour, with HMAS Australia in the background.  There is no record of Australia ever carrying this aircraft on a permanent basis, but her crane is deployed suggesting she may have been operating it on this occasion.  Photo via Ray Windlow.

As the Seagull IIIs reached the end of their useful life, the RAAF developed a specification for their replacement.  This specification called for a seaplane that offered superior performance and maintenance requirements, was capable of being catapulted from Cruisers, and could carry a full load even in the tropics.   Although the specification was widely regarded as ambitious it was nevertheless sent to all British aircraft manufacturers towards the end of 1931.

By chance Supermarine was already working on a private venture aircraft which met most of the specifications.  The company’s chief designer at the time was Reg Mitchell, who at only 24 years old was very young to hold the position.  He would later achieve fame in the design of the Spitfire, just before his untimely death at the age of 42.

The new aircraft was first flown on 21 June 1933 by Captain “Mutt” Summers, the chief test pilot for the Vickers Group.  A few days later he demonstrated the strength and capability of the aircraft by performing at loop at a show at Hendon Aerodrome.  The company subsequently demonstrated its catapulting capability and as a result the Australian Government placed an order for 24 of the new type, designated ‘Seagull V’.  The first Australian aircraft (Serial A2-1) was flown on the 25 June 1935 and was delivered to HMAS AUSTRALIA on the 9th of September 1935.

Although ridiculed for its ungainly appearance (it was often referred to as ‘The Shagbat’), the Seagull V became one of the most successful amphibians of WW2, with over 740 being built.

Below: A seagull V being lowered into the sea.  Generally the engines were started and warmed up before hoisting, to minimise the time before take off and give steerage as soon as the lines were cast off. (AWM image). 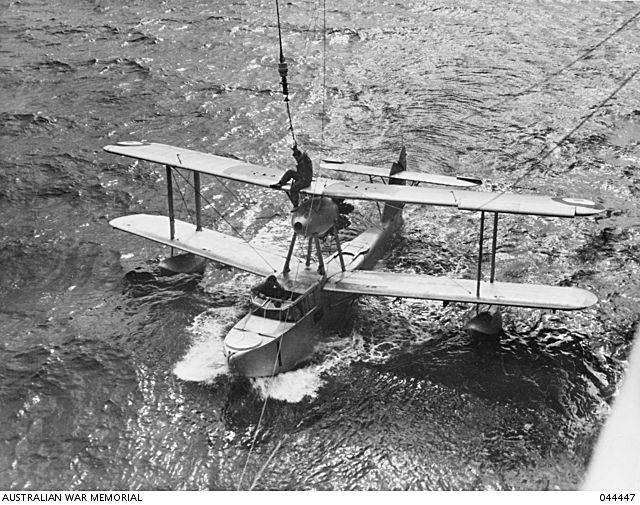 Below: A Supermarine Seagull V being pushed and towed ashore by members of the RAAF for repairs in the Northern Territory (exact location and date unknown). It possibly belonged to No. 9 (Fleet Co-operation) Squadron RAAF (AWM image). 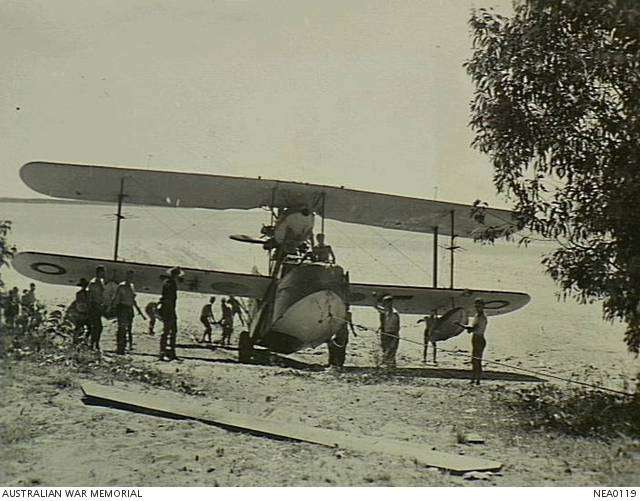 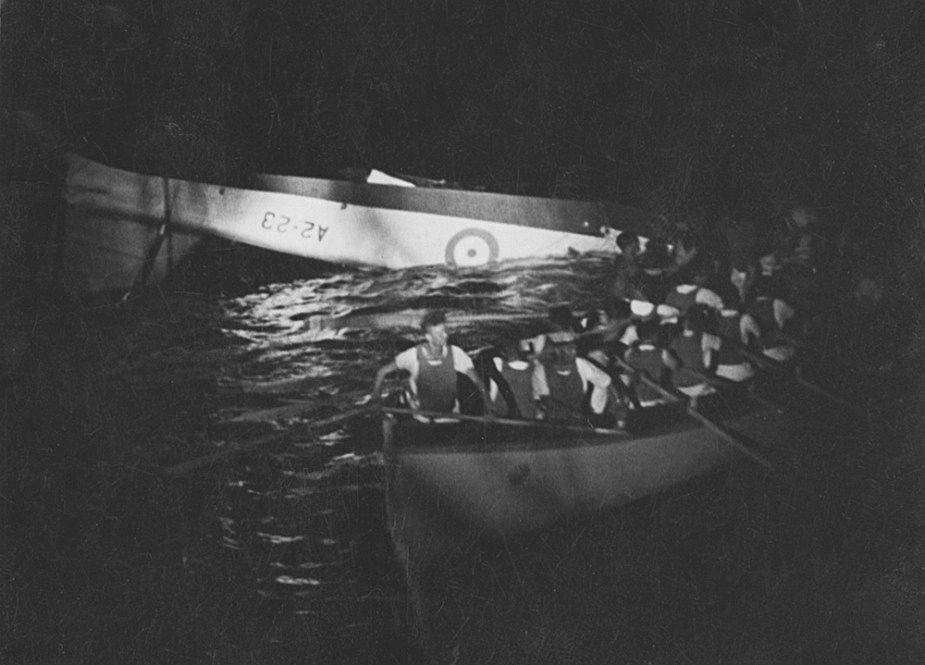 Right: The Seagull/Walrus had two positions for machine guns. This one shows a Vickers K gun in the bow sponson. (RAN Photo)

Left.  Attempting to recover HMAS HOBART’s Seagull V on 01November1939.  The ship had left Singapore to patrol the west coast of Sumatra and the Sunda Strait. HOBART’s aircraft was used extensively for reconnaissance work and on the 1st November was catapulted for night landing practice. Due to the darkness and inexperience of all parties the Walrus crashed into the sea and the damaged aircraft was recovered with the greatest difficulty. Next day HOBART returned to Singapore. While in port, a replacement aircraft (Walrus L2171) was provided from the RAF base. (ADF Serials and “HMAS Hobart” by L.J. Lind & M.A. Payne). 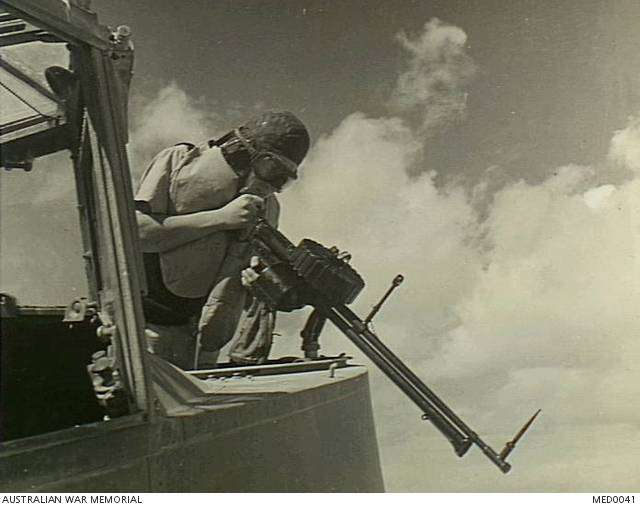 Below: Seagull V A2-14 being positioned on its catapult.  Seagulls were always launched with the wheels retracted, so it may well be that some maintenance is being carried out.

While attached to 9 Squadron RAAF this particular aircraft was used for trials on the seaplane carrier HMAS Albatross for a short time in 1937, and later used on HMAS Sydney. This shot was probably taken on HMAS Sydney in Sydney Harbour. During 1942 A2-14 was used on the armed merchant cruisers HMAS Manoora and HMAS Westralia, then withdrawn from service in 1946 before  being auctioned off in 1949. 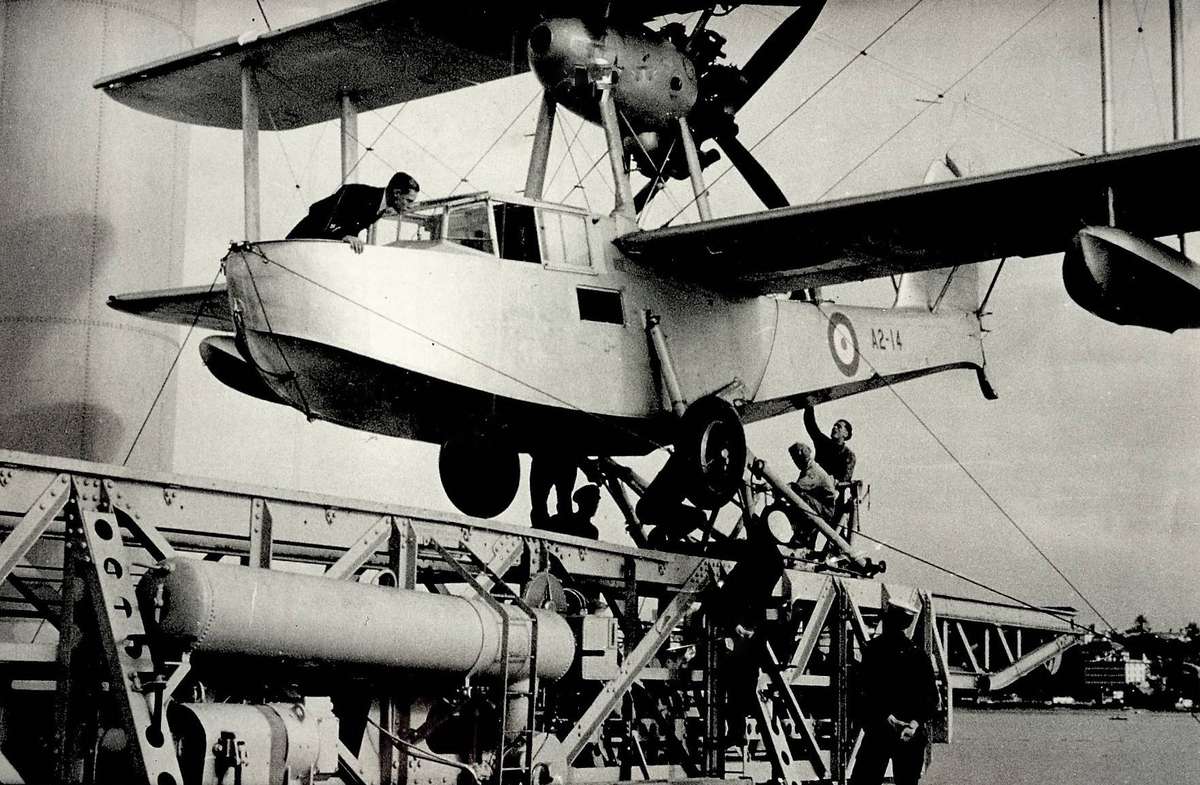 Below.  This unusual image of Walrus W2755 was taken aboard HMAS Australia in 1943. The angle of the shot gives us a good overall impression of the size of the aircraft, and some of the complexity of hoisting it onto a catapult.   Once again, maintenance is in progress on the undercarriage. The extra temporary V-shaped trestle under the bow would ease pressure on the launching cradle/frame/dolly – which is still attached – but would be removed prior to launch. Note also the circular turntable that would allow the aircraft to be turned into the relative wind, subject to the limits of the ship’s superstructure. (Photo via Kim Dunstan). 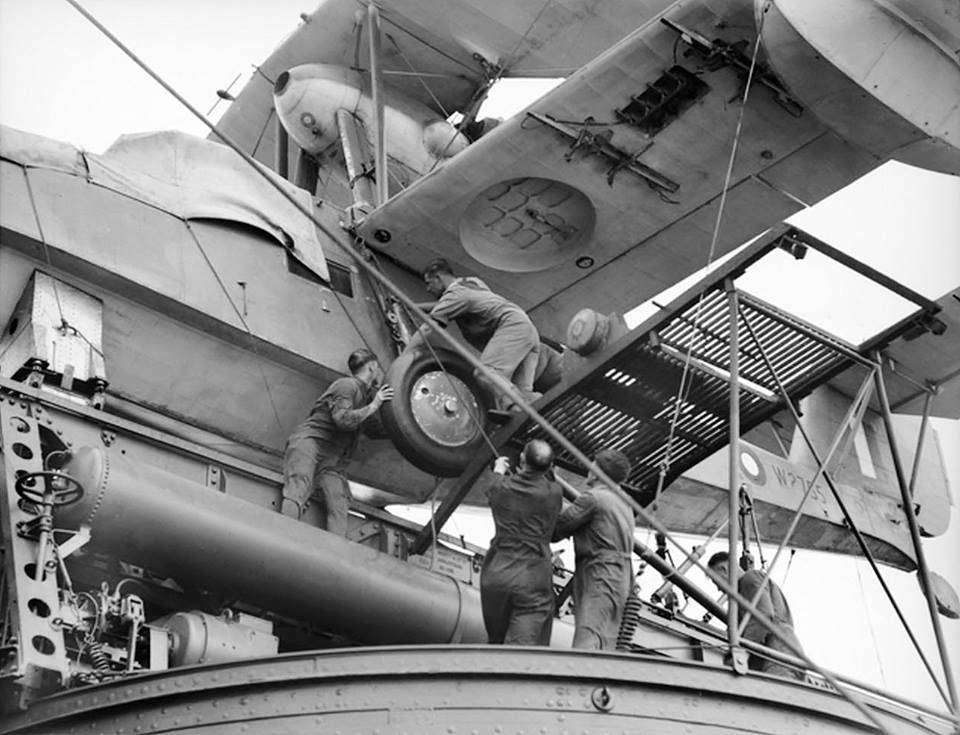