In 1948-9, the newly formed RAN Fleet Air Arm (FAA) took delivery of four surplus Mk11 Wirraways, with further deliveries in 1952 and 1953. Although obsolete, these rugged piston-engine aircraft operated from the Naval Air Station at Nowra as training and general-purpose aircraft until disposed of in 1957. They played a valuable support role in the development of post-WW2 naval aviation in the Royal Australian Navy (RAN).

On 4 June 1947, the Minister for Defence, Hon. J.J. Dedman MHR, stated in Federal Parliament that the first stage of a naval aviation plan would be implemented in 1947-48. The plan included ordering two light-fleet carriers with aircraft, the recruitment and training of pilots and maintainers and the establishment of stores and shore bases. He said Australia’s experience in WW2 demonstrated the need for maritime control in our defence, and that the lessons of the Pacific War proved the value of aircraft carriers in a modern balanced fleet.

As the RAN already had a plan for a post-WW2 fleet, which included aircraft carriers, action commenced immediately. With government approval a disused RAAF airfield at Nowra, south of Sydney, was transferred to the RAN as the main base for the FAA on 15 December 1947. It was subsequently commissioned on 31 August 1948 as HMAS Albatross [HMAS Nirimba at Schofields became the second base]. The priority was to start training ex-RN, RANVR, RAF, RAAF and RNZAF pilots who enlisted in the RAN FAA (or were on loan) ready for the arrival of the brand new Sea Furies and Fireflies in May 1949. The Wirraways that began arriving at Nowra from November 1948 were well-suited to this early training task.

Wirraways under construction at the Commonwealth Aircraft Corporation plant, circa 1940.  The fuselage comprised a welded framework, constructed from four separately produced sections bolted together during final assembly. The sides of the fuselage featured fabric covering while the underside and decking had metal coverings instead, consistent with the rest of the aircraft. (Image: AWM) .

The Wirraway was produced by the Commonwealth Aircraft Corporation (CAC), at Fishermans Bend, Melbourne. It was a licence-built variant of the North American NA-33 advanced trainer. Production of CAC Wirraways Mk1, 11 & 111s ran from 1939 to 1946 with a total of 755 built.

The Wirraway was a two-seater monoplane with stressed-metal wings, tube-steel airframe, fabric covered fuselage, and retractable undercarriage. It was powered by a 600 hp Pratt & Whitney Wasp R-1340 S1H1-G, 9-cylinder air-cooled radial engine; driving a three-blade de-Havilland/Hamilton Standard variable-pitch propeller. The tandem cockpits were fully enclosed with flight controls in both positions (the rear cockpit control column was detached when not in use). Radio equipment included a TR 11b transmitter/receiver; plus a 1083 transmitter and 1082 receiver.

Because RAN FAA aircrew were required to wear a life vest and dinghy pack, some modifications to the Wirraway seat ‘Q’ type harness/webbing was necessary. The RAAF silver paint scheme continued with the word NAVY on the fuselage, and code NW on the tail. In other respects, the aircraft remained the same including the RAAF serial numbers. The first Wirraways were delivered to Nowra’s Station Flight.

The Genesis of the Wirraway

The Wirraway was built by the Commonwealth Aircraft Corporation (CAC), which was a conglomerate of disparate companies formed to kick-start an Aviation manufacturing capability in Australia.  They chose the North American Aviation Company’s NA-16 Trainer as the first to be built under licence.

North American Aviation was founded in 1928, initially as a company that bought and sold interests in airlines. In ’34 it went into manufacturing, with a focus on training aircraft, one of which was the NA-16.  War brought rapid diversification, however, and the company went on to build such classics as the B-25 Mitchell bomber and the P-51 Mustang fighter.  By VJ day North American had 8000 orders on its books.  A few months later that had dropped to just 24.    Nevertheless, it persevered and contributed to both the jet and the Space age.  It is now part of Boeing.

The NA-16 was a conventional tandem-seat trainer. It first flew in April 1935 and had many variants, one of which became the Harvard.

In 1935 Lawrence Wackett, the General Manager of the newly-formed CAC, led a team to Europe and the USA. They were looking to evaluate modern aircraft types within Australia’s capability to build, including its power plant.  They selected the NA-33 (an upgraded version of the NA-16) with its Pratt & Whitney R-1340 “Wasp”  radial engine.  CAC also built some propellers, becoming one of the very few manufacturers who manufactured both engines and props.

The Wirraway featured some modifications to the NA-33 design, such as provision for two forward-firing guns and the strengthening of the wings and tail to facilitate dive-bombing. Other modifications included the adoption of a single gun set on a swivelling mouth to the rear of the cockpit, and installation of cameras and radio sets.

The first Wirraway model CA-1 made its maiden flight on 27 March 1939 but was retained by CAC for trails. The first production aircraft were delivered to the RAAF on 10 July 1939, and by the beginning of the war six had been delivered.

Forty CA-1 variants were constructed before the CA-3 entered service,  although there were only detail changes to the design.  Similarly, the CA-5, CA-7, CA-8 and CA-9 models were all very similar to the CA-3.   Only the CA-16 featured substantial design changes, such as wing modifications to allow a heavier bomb loan and the addition of dive brakes for dive-bombing.

The designation CA-20 was reserved for aircraft in RAN (Fleet Air Arm) service, which might suggest further modification or reconditioning – but all RAN Wirraways were surplus and passed directly from RAAF storage, so they did not pass through CAC for rework. 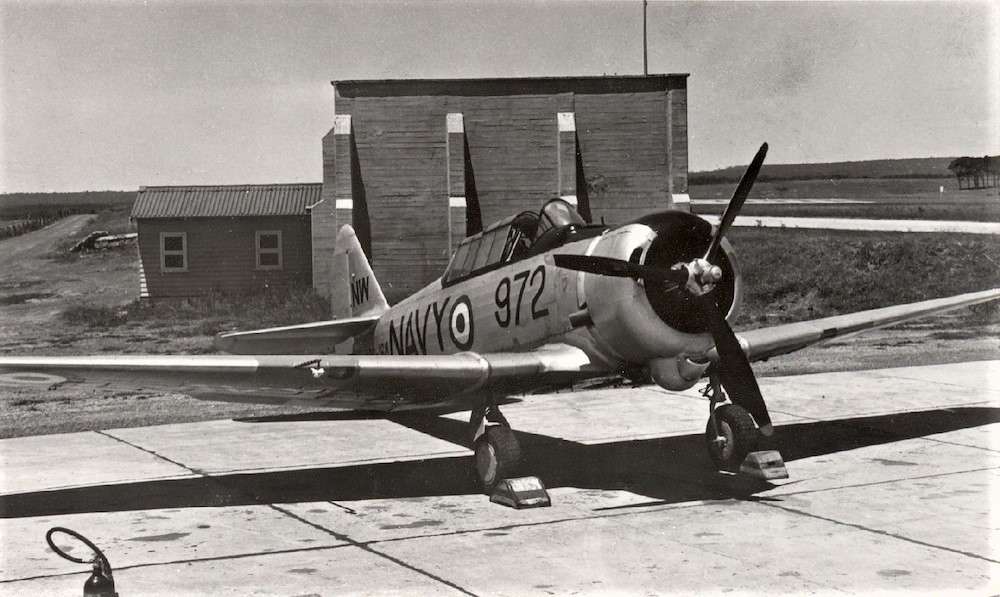 Another shot of one of the four original Wirraways at Nowra. post 1953 as it bears the “NW” designator on the tail. Looks like the old 20mm test firing butts behind it.

One of the first of four Wirraways delivered to the RAN in 1949. Note the “W” on the tail, an early designator for Nowra. It was changed to “NW” around 1953.

When the Wirraways arrived at NAS Nowra in 1948/9 their main role was aircrew training. With the influx of ex-RN, RANVR and other pilots who had transferred to the RAN FAA, the Wirraways would refresh flying skills before they converted to the Hawker Sea Fury or Fairey Firefly. Observers, prior to joining a Firefly squadron, utilised the Wirraway’s rear cockpit to perform Radio, RT and navigation training. In 1954, at the behest of 723 Squadron’s CO, some Observers gained experience using the Wirraway’s dual controls.

On 07 April 1952 723 Squadron was commissioned at NAS Nowra. The Wirraways and other aircraft joined 723 to form a Fleet Requirements Unit (FRU). This gave the Wirraways the opportunity to be involved in various roles including aircrew refresher and instrument flying courses, radio and radar tracking exercises and Search and Rescue. They also assisted the Australian Joint Anti-Submarine School (AJASS) – the joint RAN/RAAF facility based at NAS Nowra specialising in anti-submarine warfare (ASW) exercises.

When 724 Squadron was commissioned on 01 June 1955 as the fixed-wing training squadron, the Wirraways moved there. 724 was equipped with a range of aircraft, including Hawker Sea Furies, Fairey Firefly AS6s, and Vampire T.34 jet trainers. Part of 724’s role involved assisting RAN ships near Jervis Bay, doing radar and radio calibrations. At other times aircraft would work with the Radar Plot Branch at HMAS Watson, based at Sydney’s South Head, conducting interception exercises.

RAN trainee pilots joining 724 Squadron (having flown Wirraways ab initio at the RAAF Flying Training School at Point Cook) found conversion to the more powerful Sea Fury and Firefly aircraft was eased by a having access to the Wirraways at Nowra. Overall, the main tasks for the Wirraways at 724 were Instrument Flying (IF) training, General Flying Practise (GFP), and re-qualification sorties for pilots not attached to squadrons to maintain their flying hours. The Wirraways also played an important part in maintainer training.

Responding to the RAN’s call for spare RAAF aircraft for training purposes, the Air Board approved more aircraft for NAS Nowra in June 1948. These additional ex-RAAF aircraft included two Dakota C-47s, which the RAN converted to flying classrooms for aircrew training; three DH Tiger Moths and 14 (non-airworthy) Supermarine Spitfires for maintainer training. They latter were also used by aircraft handlers to practise marshalling aircraft (with engines running) on the ‘Dummy Deck’ – a mock flight-deck.

Two Wirraways on the tarmac with a Sea Fury in the distance at RANAS Nowra – we don’t know the name of person in the picture, but gives an indication of the size of the aircraft and its 600 hp Pratt & Whitney Wasp R-1340 engine.

The CAC Wirraways transferred to the RAN were dispatched from RAAF Tocumwal or No 2 Aircraft Depot Richmond – free of charge. The Wirraways were Mk11s selected for post-war use and had been held in storage. They were delivered ex-stock and not reconditioned by CAC as noted in some reports. A total of 16 airworthy Wirraways served at NAS Nowra, variously between 1948 and 1953, with one additional unsuitable airframe held in storage.

The RAN FAA found the Wirraways to be sturdy, reliable aircraft and a valuable asset at NAS Nowra, serving as a training and general support aircraft until disposed of in 1957. The fact that only one RAN Wirraway was written-off during their time at Nowra (in June 1953) shows how well the Wirraways performed – a worthy workhorse indeed.

The RAN Wirraways were replaced by De Havilland Vampire T.34 & T.22 trainers at Nowra. In 1957 the 15 remaining Wirraways were sold to Lund Aviation Inc. of New York.

None of the RAN Wirraways survive because all airframes were sold or disposed of. But several ex-RAAF Wirraways are located in Australian aviation museums, with some airworthy examples, and others under restoration. CAC Wirraways may also be found at the PNG Museum at Port Moresby, and at Fantasy of Flight, Polk City, Florida, USA.

On Sunday 30 May 1999, during an Air Show organised by the Australian Naval Aviation Museum at NAS Nowra, a privately owned Wirraway was conducting a demonstration flight when it nose-dived into the ground. The 1950s restored Wirraway made several passes along the runway when it appeared to lose power and crashed. Both the civilian pilot and passenger were killed – the Air Show was then closed.