This page is under construction

Although the purpose of this website is to tell the story of Wirraways from a Fleet Air Arm perspective, it is worth capturing its broader historical perspective – and that of the Commonwealth Aircraft Corporation (CAC), which constructed them.
CAC was a consortium of companies that included such names as BHP, General Motors Holden, Imperial Chemical Industries and the Orient Steamship Company, which worked together to form the company in 1936, in anticipation of a war in Europe.  Its purpose was to boost manufacturing capabilities, and in particular to bolster aircraft production in the event they would not be available from ‘traditional’ sources should conflict arise.
By September 1937 a factory had been completed in Port Melbourne. By then a small team had been overseas to select a modern aircraft type to produce under licence.  It was the North American NA-16, and it went into production as the CAC Wirraway – with the first aircraft rolling off the new assembly line in March 1939, just six months before the outbreak of WW2.
The Wirraway was therefore not only the first aircraft of the newly-formed CAC, but also the very first mass-produced aircraft built in Australia.

All RAN Wirraways were ex-RAAF and were surplus to requirements.  They were transferred from storage, either from 2AD in Richmond or 1AD Tocumwal.  The list below (courtesy ADF Serials) details the aircraft and dates:

RAN Wirraways were all designated model CA-20 but this appears to have been purely an administrative nomenclature as they were transferred directly from storage without modification or rework.  In fact, the RAN aircraft were a mixture of model numbers: 1xCA-1, 9xCA-7, 1xCA-5, 2xCA-8, 2xCA-9 and one CA-16.  You can see a pop-up of the Record Card for A20-138 here, which is indicative of the transfer process.

Left.  Another manufacturing shot (how many men does it take to make a Wirraway?).  This shows the final operation, which is screwing the fabric covering to the sides of the fuselage. The engine cowling, wings, centre section and part of the fuselage cowling were covered with Dural Alloy.  (Australian War Memorial).
Below. This newspaper cutting tells of the two new carriers for the RAN, marking the very beginning of our Fleet Air Arm.  The first, HMAS Sydney, unloaded its new Sea Furies and Fireflies at Jervis Bay in May of 1949.  They represented the latest in air power, but had no dual seat training capacity, so the Navy asked the RAAF for a number of Wirraways. You can read all about the beginnings of the FAA here. 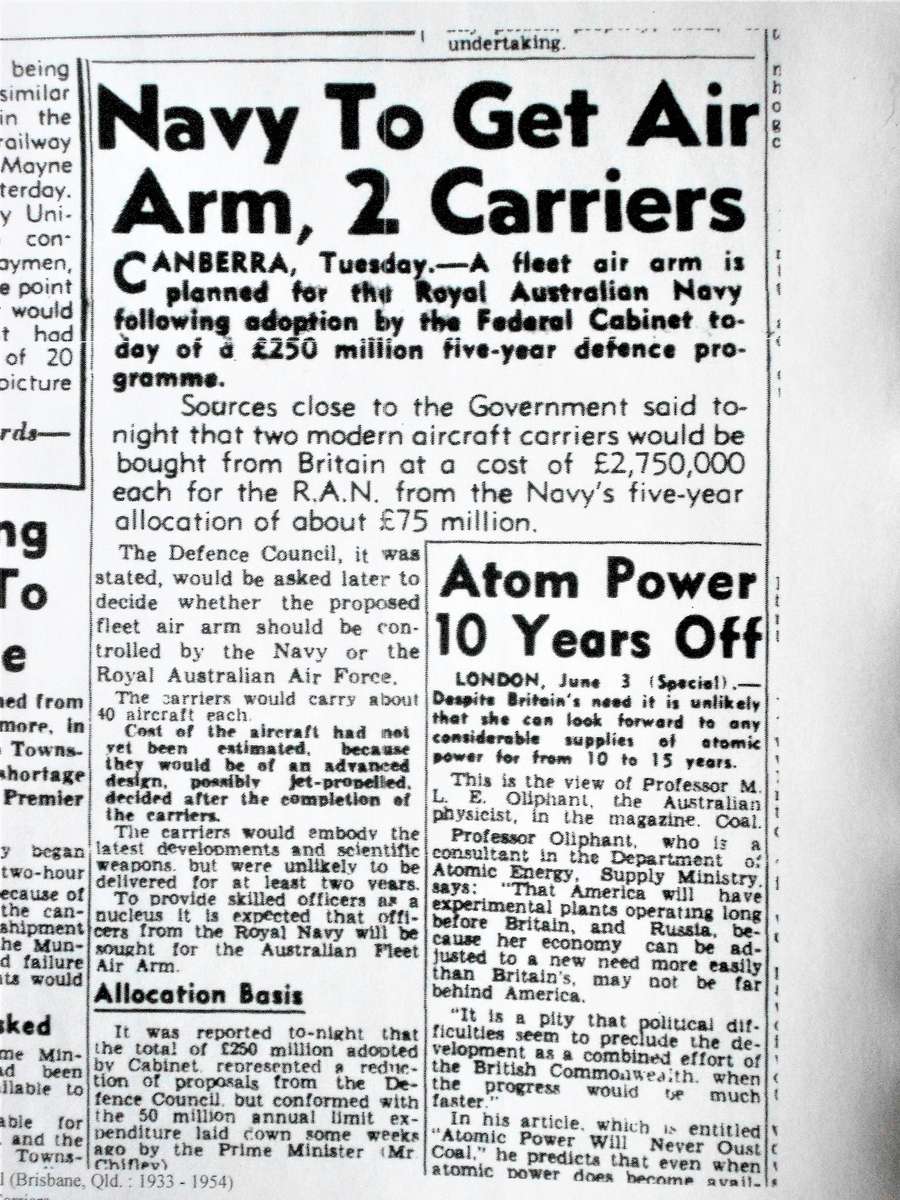 Left.  The engine starting instruction from the Pilot’s Notes, using the Throttle, Hand Fuel Pump and Mixture control all mounted on the left hand side of the front cockpit (image below).  Note also the mechanical bomb release and the signal pistol cartridges – nothing too sophisticated!

Below. A view of the rear cockpit starboard bulkhead showed a similar spartan construction, consistent with wartime design. Note the spare control column stowed on clips.

Right:  The Wirraway trained hundreds of Army, RAAF and RAN pilots. Here, No. 12 course graduates at RAAF Point Cook on 12 May 1954 – the Navy trainees are in the front row and many went on to fly Sea Furies Gannets or Fireflies in the Fleet Air Arm.  Left to right:  Phil Rowe,  John Champion,  Murray Douglas,  Haddon Spurgeon,  Jim Van-Gelder and John “Cal” Pain.  (via FAAM). Van Gelder lost his life just a year later when his Gannet crashed into the sea off the Isle of Wight, UK.

You can read the Wirraway Instructor’s Handbook here. 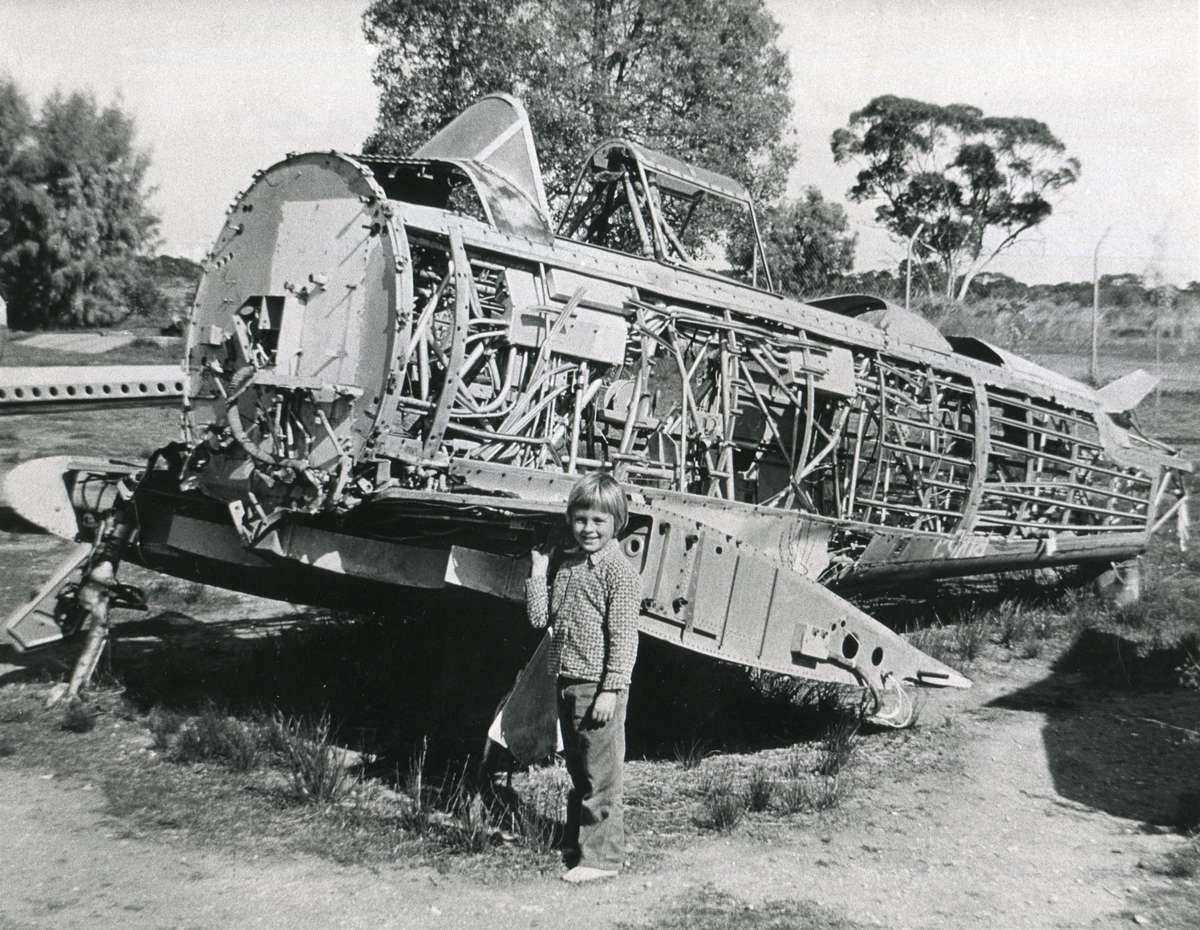 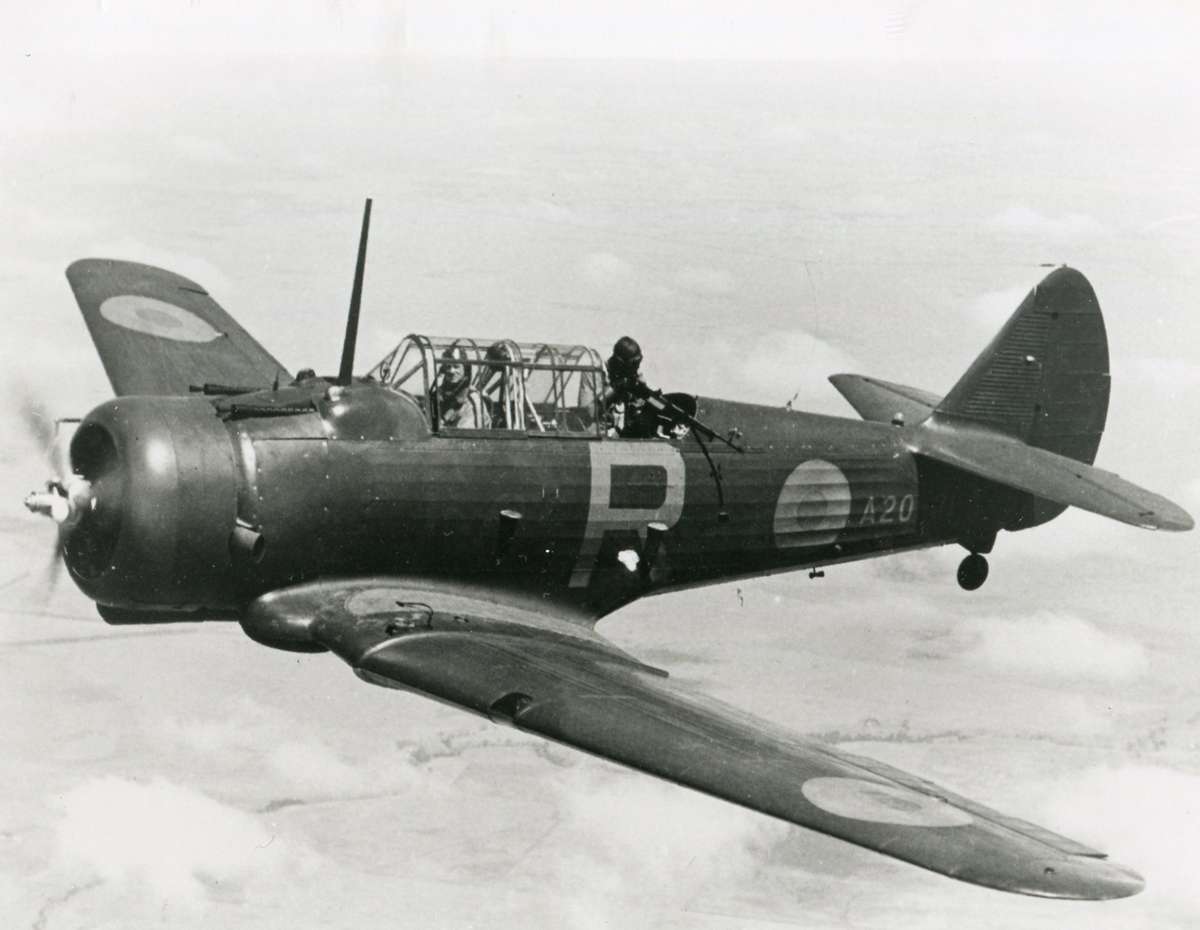 Above.  Neither of these aircraft served in Navy, but their photos show useful features. On the left, this wreck near Mildura gives a good impression of the solidarity of the Wirraway’s construction.  Right: one of the few images we’ve seen with the gunner’s position in the aft cockpit manned.  (via FAAM).  Below.  A20-139 parked alongside a Sea Fury at NAS Nowra, circa 1950.  The hangar under construction in the background is still in use to this day.  (via FAAM).

Left: Only one Navy Wirraway came to grief: A20-145 which crashed following an engine failure on take off at Nowra on 18 June 1953. Details of the accident are scarce but we know the pilot (Nunn, RN) survived but the aircraft was dismantled for spares (above) and then scrapped.

Right.  None of the ex-Navy Wirraways survived, so vintage shots are not possible of the actual airframes.  This photo is the closest we could find: the aircraft is marked with an old RAN serial number, but is actually another airframe. It’s painted in old RAAF camouflage colours which may have been the case when it was in RAAF service. The aircraft is part of the ‘Wirraway Aviation Museum’ collection at Pokolbin, NSW. Note also the rear mounted Vickers  machine gun.