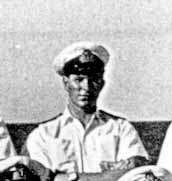 John Hereward McClinton was born on 18 July 1932 at Cheadle Hulme, near Manchester, UK. The details of McClinton’s recruitment in the Royal Navy are not available, but it appears that he enlisted in 1950 or 51, joining the RN Fleet Air Arm (FAA) to as a Midshipman Trainee Pilot. This involved an aircrew selection process where he was selected for pilot training before being drafted to the Elementary Flying School at HMS Siskin, Gosport.

Having successfully completed the EFS course his next move would have been to RAF Syerston to continue his training. After graduating with his ‘wings’, Acting Sub Lieutenant (P), McClinton was drafted to an RN air station for an Operational Flying Course. Here he would have consolidated flying skills on naval aircraft, including weapons training and deck landing on RN carriers. McClinton then converted to the Hawker Sea Fury to become a fighter pilot.

Having completed his training, McClinton was drafted to RNAS Stretton (HMS Blackcap). In the 1950s the RN and RAN had an aircrew exchange program, to provide wider experience and develop inter-service cooperation. On 29 May 1953, Acting Sub Lieutenant (P) McClinton was transferred on loan for a one-year (approx.) term for flying duties with the RAN FAA. He arrived at HMAS Albatross (RANAS Nowra) on 4 June 1953, joining 805 Squadron – a front-line unit equipped with Hawker Sea Fury Mk11 fighter bombers.

805 Squadron was stationed at RANAS Nowra until the squadron was required for sea duty, when it would then embark on the aircraft carriers HMAS Sydney (111) or HMAS Vengeance (1). At RANAS Nowra, McClinton commenced flying the Sea Furies and exercise drills. On 3 July 1953, 805 Squadron embarked on HMAS Vengeance and immediately began ‘work-up’ exercises. After calling at Sydney Harbour, the ship proceeded to Hervey Bay (Qld) where ‘work-ups’ with live-firing and bombing exercises took place over several weeks, stopping at Brisbane before sailing south. Following exercises with RAAF aircraft from Williamtown the ship disembarked its Air Group on 9 August to RANAS Nowra, at Jervis Bay

On 21 September 1953, 805 Squadron (with 850 and 816 Squadrons) embarked on HMAS Sydney for ’work-up’ exercises in the Hervey Bay region before returning to Sydney Harbour for replenishment. She then sailed for Fremantle, arriving on 26 October. From there Sydney proceeded to Singapore to begin exercises with RN Fleet units in SE Asia waters, before proceeding to Hong Kong for a brief stopover. She then resumed exercises with USN, HMS, HMCS and HMA ships, during which time her Squadrons were heavily engaged in exercises with fleet units.

Sydney then sailed to Japan making calls at Kure and Sasebo, and again engaging in exercises with naval units with a heavy flying schedule. Having completed several weeks of exercises, she sailed from Kure for Hong Kong on 27 December 1953, with flying exercises on route. Upon arrival at Hong Kong the ship replenished and some recreational leave was given, prior to resuming more exercises with RN fleet units based in Hong Kong – which commenced early January 1954.

On 15 January 1954, HMAS Sydney was conducting exercises with HM Submarine Thorough, near Hong Kong, with several RN destroyers and aircraft from Sydney taking part. During the forenoon of the15th, McClinton was severely injured when he walked into a rotating propeller on Sydney’s flight deck. Captain Oldham returned the ship to harbour with all despatch, instructing aircraft to land at Kai Tak. An hour and a half later McClinton was transferred to the Naval Hospital at Hong Kong, but died later that day.