Mystery Photo number 10 showed a SBLT strapped to a glider at RANAS Nowra in the mid 50s and asked the following questions: There wasn’t exactly a flood of answers to this Mystery Photo (but then there never is).  Cris George came closest to the correct answer when he suggested the glider was a local version of the German SG38,  the SBLT was Senior Commissioned Engineer Harold L. Kent, the year between 1950 and 1954 and the aircraft in the background was a DH94 Moth Minor.

Actually, we are not sure of the exact glider type ourselves, other than it was a Zogling Style primary glider. This was a German high wing cable braced machine that was designed by Alexander Lippisch in 1926 and produced with many variations by a variety of manufacturers. The exact derivative in the photograph remains a mystery, but we know it operated at NAS Nowra at least in 1958 as the aircraft in the background is a Wirraway which were withdrawn that year.

Cris’s suggestion of the SG38 is close, as the basic configuration of that machine was very similar to earlier gliders such as the Stamer Lippisch Zögling  but the SG 38 was an entirely new design. Improvements included enlarged tail surfaces for better stability, a separate skid mounted on shock-absorbing springs, and an updated seat for the pilot.  We think the Mystery Photo is of a  more basic machine. 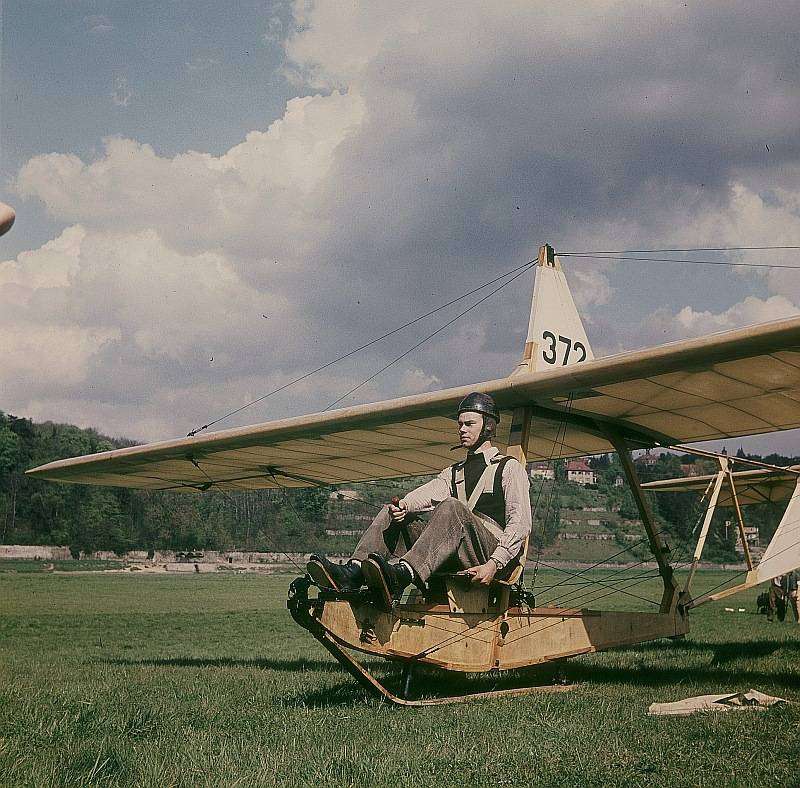 Cris provided a photo to support his assertion, however, which is shown above.  You can see the similarity not only in the design of the glider, but the responsiveness and wooden expression of the pilot – perhaps it is the same Sub-Lieutenant!  We were concerned that a piece of his glider appears to have fallen off but he hasn’t noticed it.

Cris also kindly provided the following excerpt from The Advertiser (Adelaide, SA) dated Tuesday 10 October 1950, which gives some insight into why he thought it was SBLT Kent and also why gliding was so popular in post WW1 Germany.

By A Special Correspondent

A dozen officers and men of the Royal Australian Naval Air Station, HMAS Albatross, at Nowra, 22 miles north-west of Jervis Bay, have recently established a gliding club and will begin practising shortly.

Their leader and instructor is Senior Commissioned Aircraft Engineer Harold L. Kent, RN, who has been serving on loan at Nowra for a little more than 18 months. He has been a glider pilot for 11 years, and was a member of the British gliding team which visited Switzerland in June 1948 to take part in international competitions.  Since he has been at Nowra, Mr. Kent, who joined the Royal Navy 31 years ago as a boy artificer, has designed a glider of his own, which is an improvement on the original type of German glider known as the SG 38. He has flown it himself numerous times and it has now been awarded a certificate of airworthiness by the Gliding Federation of Australia. The club could not begin training until the certificate had been received. German Efforts Gliding can be practised for military purposes or purely as a sport. It was for military reasons that the Germans engaged in it on a wide scale after the First World War, when the extensive manufacture of aircraft was forbidden them under the Treaty of Versailles. Their development of the art and the formation of large numbers of clubs in their own country led to the rapidly-growing popularity of gliding throughout the world. In Germany alone, there were 300,000 glider enthusiasts at the opening of the second World War.

The practical value of gliding to the Germans was proved in the war on several occasions on which gliders were used by Hitler’s invasion troops, particularly in their invasion of Crete. But is it as a sport, or pastime, that most people are attracted. Indeed, one ardent sporting glider has become almost lyrical about the subject. ‘I am unable to describe by words,’ he, says, ‘the sublime pleasure one experiences in gliding over hills and valleys, silently, like the eagle, cruising or hovering, rising or descending at will. ‘The ample controllability makes you feel like an eagle, master of the air. The constant alertness necessary in watching for favourable air currents, and in studying their relation to the varied scenery, below, provides thrill and challenge.. ‘A few weeks in a glider camp is outdoor life to the full.’ Those who have joined the gliding club at Nowra have done so merely to take part in what is, to them, a new and novel recreation, but they may, nevertheless, obtain much information about wind and air currents which will have considerable scientific significance. The members of the Nowra Gliding Club have had many distinguished predecessors who have all added something to wards solving the problems associated with flight. Even if they, themselves, do not make any great discoveries, they will have a lot of good, healthy fun; and that, really, is all they set out to do in forming their club.