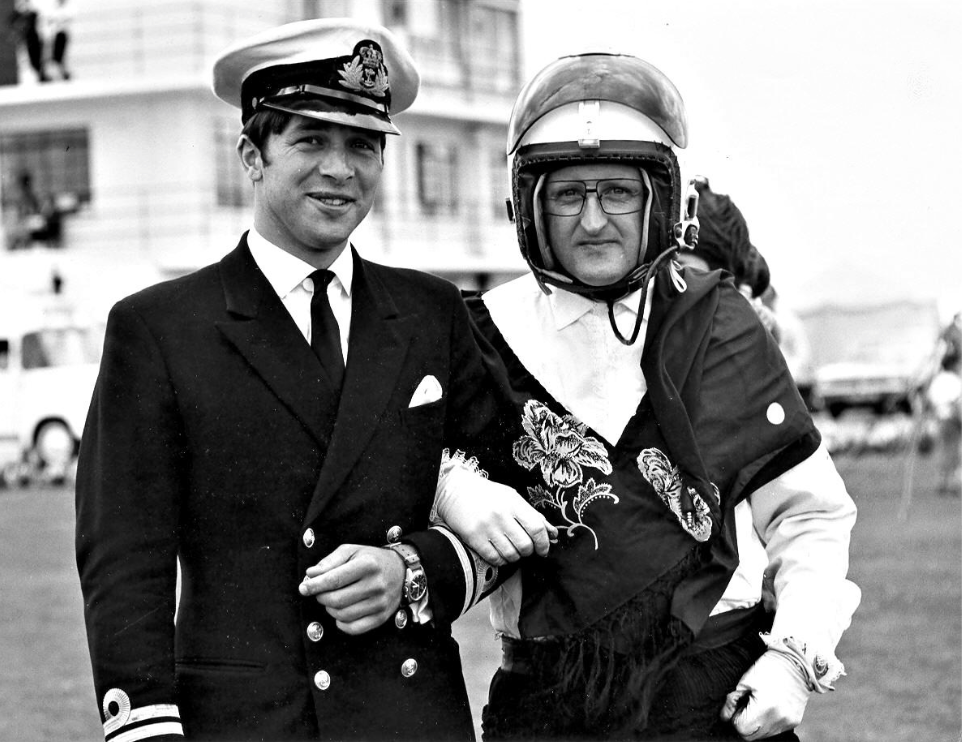 Readers were asked to provide:

The officer on the left is LEUT David Garwood, RN, a student on 705 Squadron.  He was escorting the good looking ‘lady’ on the right who was [then] LEUT John ‘Bomber’ Brown.  John  provided the following information.

As one of the events on the program, I was to do the duty  ‘little old lady’ stunt. Standard Air Show skit, where a member of the crowd wins a flight in a Navy helicopter in a number-plate draw. Mine of course was the ‘winner’ so nobody else turned up to claim the prize. The show didn’t call for much except getting airborne in an erratic manner after the ‘instructor’ got out to fasten the empty seat belt. I was allocated about 1 minute to generally go ‘nuts’ in a Gazelle (who could ask for more!?)

The helo doors were off to make the in/out for the two participants easier. Two previous practices had gone well, but without the full ‘old lady’ gear on (you can see it coming, can’t you)

At the pre-flight briefing the weather guesser got it wrong again, but told us truthfully that the cloud base wouldn’t get much above 500 feet at best. We were also doing a “Sharks” (Display Team) display, but below 500′ in helos, doing a ‘low show’ was not a problem.

Guest Military aircraft invited to the day included the Luftwaffe (German Air Force) who were forced to divert to RAF St.Mawgan earlier in the day with their F104 Starfighters, due to our weather. They insisted they should take part so ‘Wings’ compromised by letting them do a GCA (Ground Controlled Approach – radar approach to the main runway), do a Minima overshoot and return to St.Mawgan. He also had ‘concerns’ about:
a)    Language barrier – German pilot was not all that clear on the phone.
b)    Doing the CGA with the weather as it was and,
c)     Doing the whole exercise with aircraft like the Starfighter – a stalling speed faster than anything in the UK at that time.

Plan B was now that we would put on the little old lady just before the F104s and when they were established on the approach (in cloud) a radio call would get me to exit stage right. The reason being it was a display with no fixed time in the routine – the granny could flop around the sky forever!!! Timing was nothing!

Came time to get prepared and everything was fine, but what cannot be seen in the photo is granny’s flowing locks. The skit started, and immediately the flowing locks blew around and covered my eyes. Shit! A boot full of other pedal sort of cleared things but there was no sign at this stage of the Luftwaffe!!

“Keep filling” was all the tower could tell the – almost blind – granny.

Suddenly the call to “Clear” came over as the Luftwaffe suddenly turned up at about 10 miles and approaching at some 200+ knots (I have no idea of their actual speed, but “fast” covers it). In a matter of a minute (which felt like 30 seconds) the following occurred:-

The Luftwaffe was sent a message thanking them for their “great” appearance.

Ken Vote chipped in with a similar story.  It would seem that dressing up at air shows carries some risk.

My incident was at a Fairbairn air day circa ’73. I was the pilot and Dick Mackerras was the member of the crowd who was to jump in and “fly” the Huey.

As he broke from under the crowd barrier dressed in jeans and t-shirt two SAS troopers who were ground party for the next act, Army parachute display, chased him as he sprinted 50 yards to the chopper. They caught him just outside the rotor disc, knocked him down and put the boot in. Mackerras broke free, dived in the back and I launched. Dick assured me he was ok and we completed the routine

The routine had been covered in the pre airshow brief. Hedley Thomas, Squadron Leader Training Flight Commander, could not prevent Lieutenant me from severely debriefing Major parachuter.