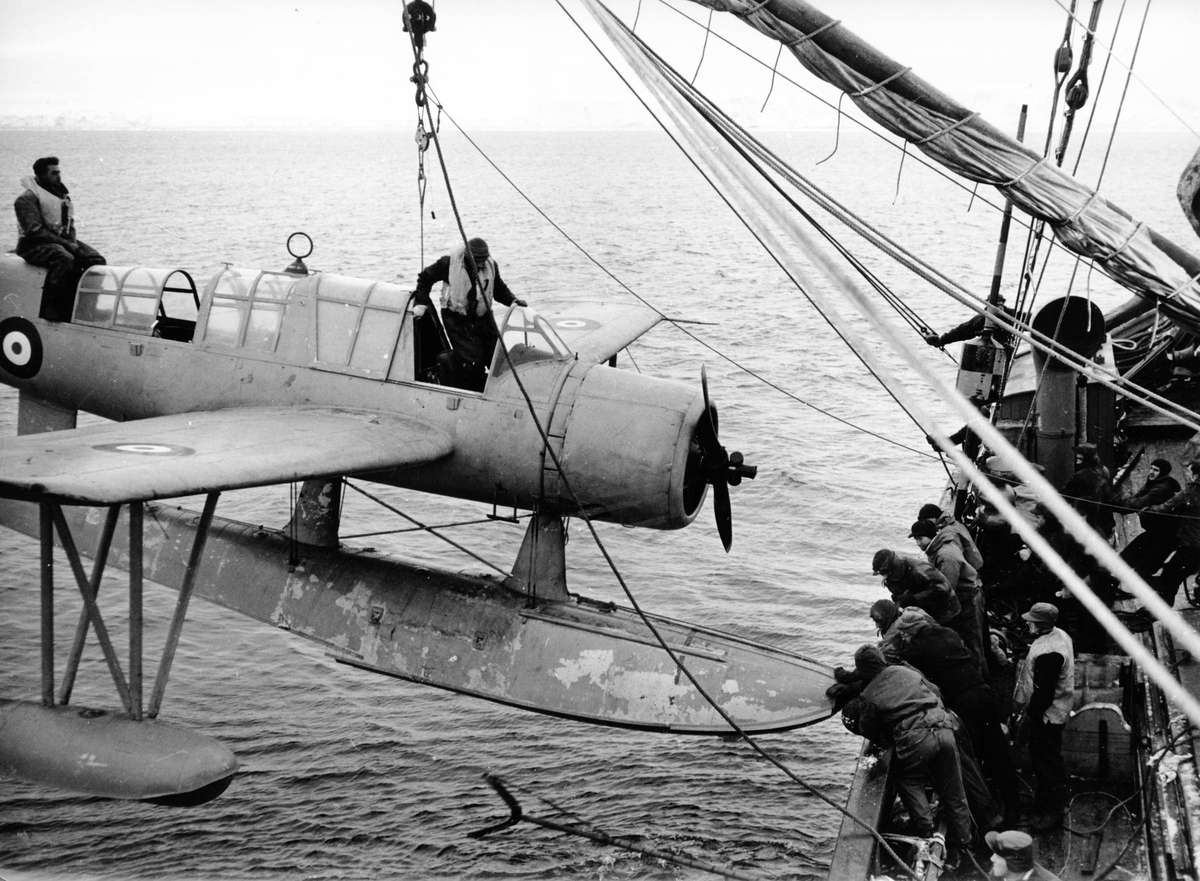 Mystery Photo 23 showed an aircraft being loaded aboard a ship with the aircrew waiting to disembark (Image courtesy of FAA Museum).

Richard Kenderdine correctly identified the aircraft as a Vought Kingfisher, being loaded onto HMAS Wyatt Earp during a deployment to the Antarctic.  We believe the photograph was taken in the vicinity of the Balleny Islands, in February 1948.

The embarkation of the Kingfisher aboard HMAS Wyatt Earp in 1948 is one of the strangest and doubtless one of the most ill-conceived events in the history of Australian Naval Aviation at sea.

The Wyatt Earp was originally built in Norway in 1919 as the sealing ship Fanefjord.  Designed for Arctic waters it was very strongly constructed of wood with an overall length of 136 feet, a beam of 29 feet and a draught of 15 feet. It was given a round bottom and no bilge keel so it could withstand the pressure of ice.  The side effect, however, was that she rolled like a pig: on occasions up to 55 degrees each way. The rate of roll was also very quick: typically 4.5 seconds from port to starboard and back.

In 1933 an American millionaire bought the Fanefjord and renamed it Wyatt Earp after his home country hero. He had it sheathed in oak with steel plates as further protection against ice, and made four expeditions to Antartica with Sir Hubery Wilkins – but at the end of the 1939 voyage he was exasperated with the excessive roll characteristics and so gave the ship to Wilkins, who promptly sold it to the Australian Government for £4,400.

Shortly after the beginning of WW2 the Wyatt Earp was handed to the RAN, who renamed it Wondalga and used it to carry stores to Darwin and then as a Guard Ship in South Australia.  At the conclusion of the war she was made available to Sea Scouts for training.

That might have marked the end of the old vessel, but for a quirk of fate.  In 1947 another arm of the Government were looking for a suitable vessel for the Australian National Antarctic Research Expedition, and the Wondalga was recommended for the task by no less than Sir Douglas Mawson, who knew of the ship.   It was handed back to the control of the RAN, renamed the Wyatt Earp, and given a £50,000 refit (in excess of 10 times more than they had paid for the vessel in the first place). Rotting timbers were replaced, the superstructure altered to provide better visibility from the bridge and workspaces and extra accommodation fitted for crew and scientists.   A new diesel engine was also fitted, although the mast and sails were retained: the last ship in the ORBAT to have sails. LCDR William Cook joined the ship in refit and later wrote:

“Perhaps we were the last of His Majesty’s ships under the White Ensign to use sail. I know I got a great thrill out of piping ‘Hands to sailing stations’ when we set all plain sail as we so often did. We found that with a favourable wind on the quarter we increased her speed up to two knots. But the real advantage was that it slowed down her rate of roll by at least two seconds, which, when she was rolling 30° to 40°, really meant something.” 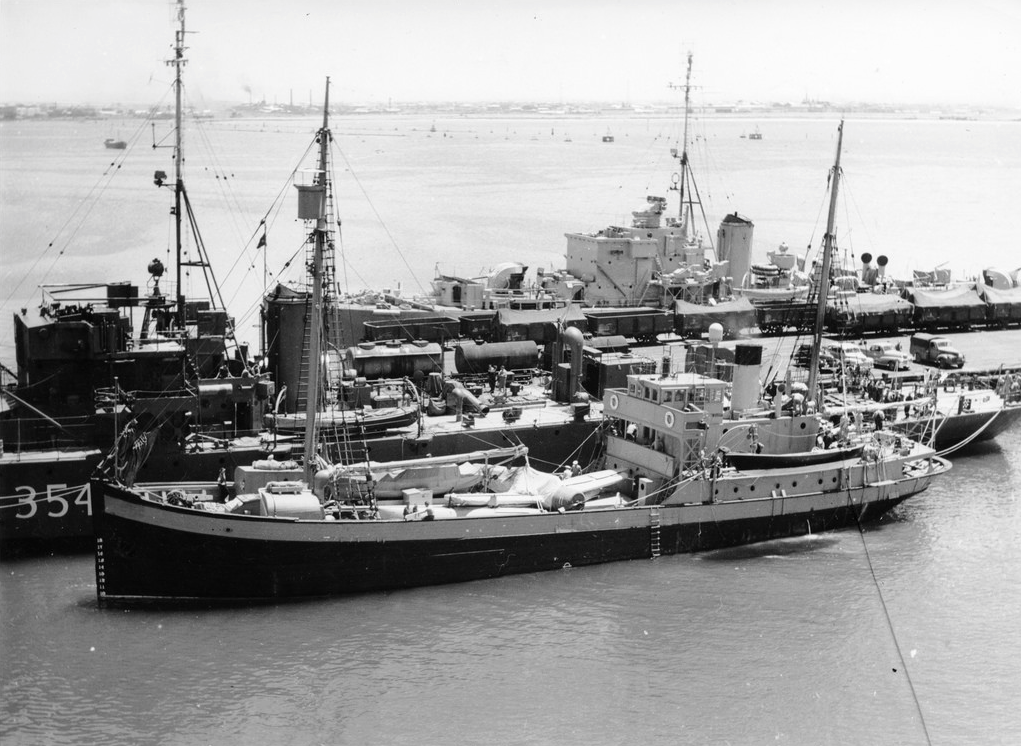 HMAS Wyatt Earp alongside Williamstown Naval Dockyard on 05 December 1947, with the Vought Kingfisher stowed on the forward deck.  The famous WW2 Frigate HMAS Gascoyne lies inboard of her, and HMAS Culgoa is berthed across the pier.

After a couple of false starts for technical problems, the ship sailed at the start of March 1938.  She had a Voight Kingfisher aboard: a cumbersome, ungainly aircraft seemingly comprising more float than fuselage and significantly underpowered. 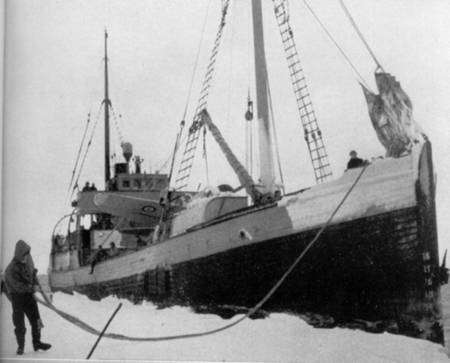 Left:  HMS Wyatt Earp at Ice Edge, 1948. The Kingfisher’s wingtip can just be seen forward of the bridge superstructure.

HMAS Wyatt Earp returned to Australia on 31 March 1948, after only four weeks at sea. The voyage was not a success:  she was battered by severe weather and the entire crew were incapacitated by sea sickness due to her rolling motion.  There were also serious personality clashes between key people aboard which led to a very unhappy ship.

Three months after her return she was paid off and sold to a shipping company in Victoria for £11,000 and renamed the Wondalga.  In 1956 she changed hands again, christened the Natone and put to work in east Australian waters in general trade.  In January 1959, now forty years old, she was struck by a severe storm off the coast of Queensland that flooded the engine room. She managed to make Rainbow Bay under sail but was blown ashore and wrecked.

The Vought Kingfisher, despite its ungainly appearance, was one of the most successful WW2 naval observation float planes built, although it saw most of its service in the USN.  A single Pratt & Whitney R985 Wasp engine developed only 450HP, making it somewhat underpowered – but over 1500 aircraft served in many theatres and it performed well due to its rugged construction.  It was primarily carried by USN battleships, launching by means of a catapult launch rail and recovering by hoist 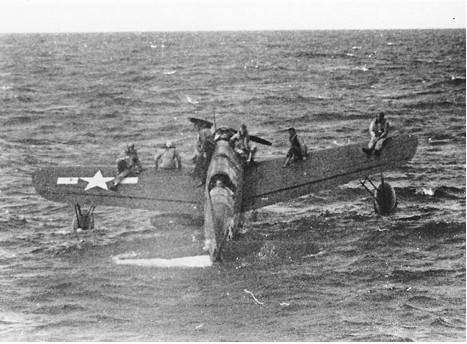 after landing in the water alongside its mother ship.  It was also used to rescue downed aircrew, with its most famous rescue  occurring in April 1944 when a number of survivors were picked up and carried (via water taxi as the aircraft was too heavy to fly) to the submarine Tang  (see photo left)

Australia received 18 Kingfishers from a batch of aircraft ordered by the Dutch East Indies and diverted to Australia in 1942. They were initially used as training aircraft for pilots destined for Flying Boats, but later did convoy escort duties.  Only one Kingfisher ever embarked on an RAN vessel – the Wyatt Earp as described above, which was too small and ill-equiped to operate her effectively.   It was, nevertheless a formal operation and, as such, the Kingfisher is one of the aircraft types that operated at sea in the Royal Australian Navy.

The Kingfisher assigned to HMAS Wyatt Earp was A18-13. It was fitted with an engine pre-heater and painted yellow before the embarkation and, according to ADF Serials, flew some 40 hours during the mission scouting for pack ice.  The aircraft was returned to RAAF Point Cook on 31/3/48.   As you can see from the photo below left (of a different airframe), the Kingfisher was not a graceful sight.