The attached two photographs show a particularly significant moment back in 1956.  Can anybody give information on where it happened and what the occasion was?   Click on the photos to enlarge them.

Answer can now be seen below. 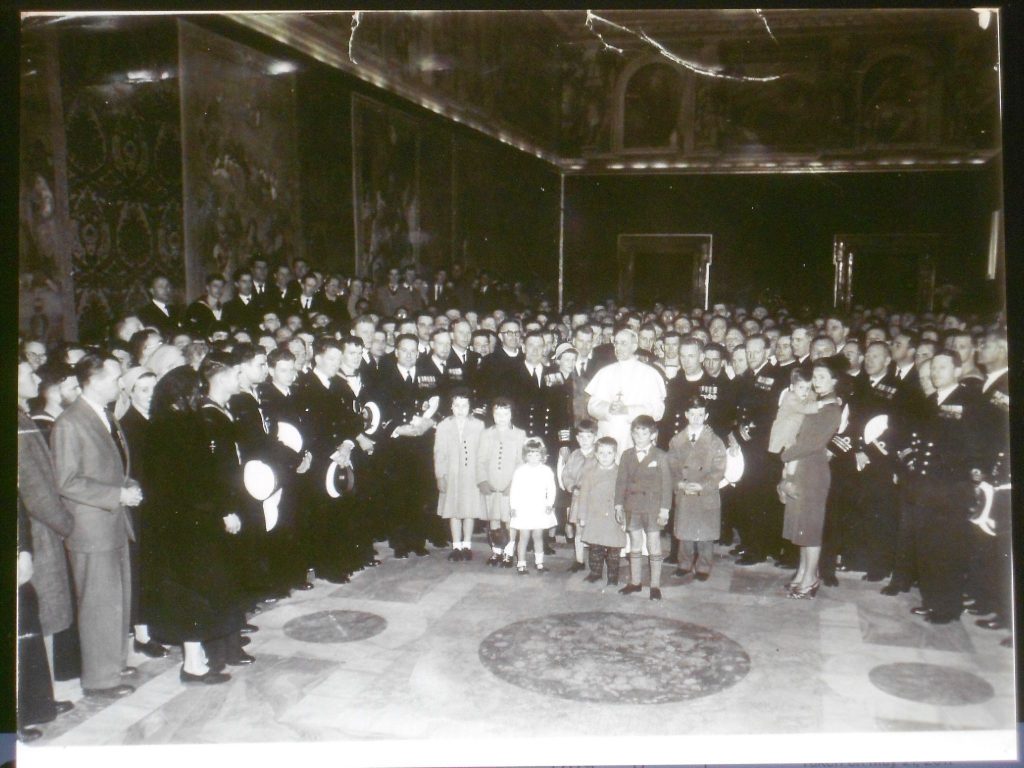 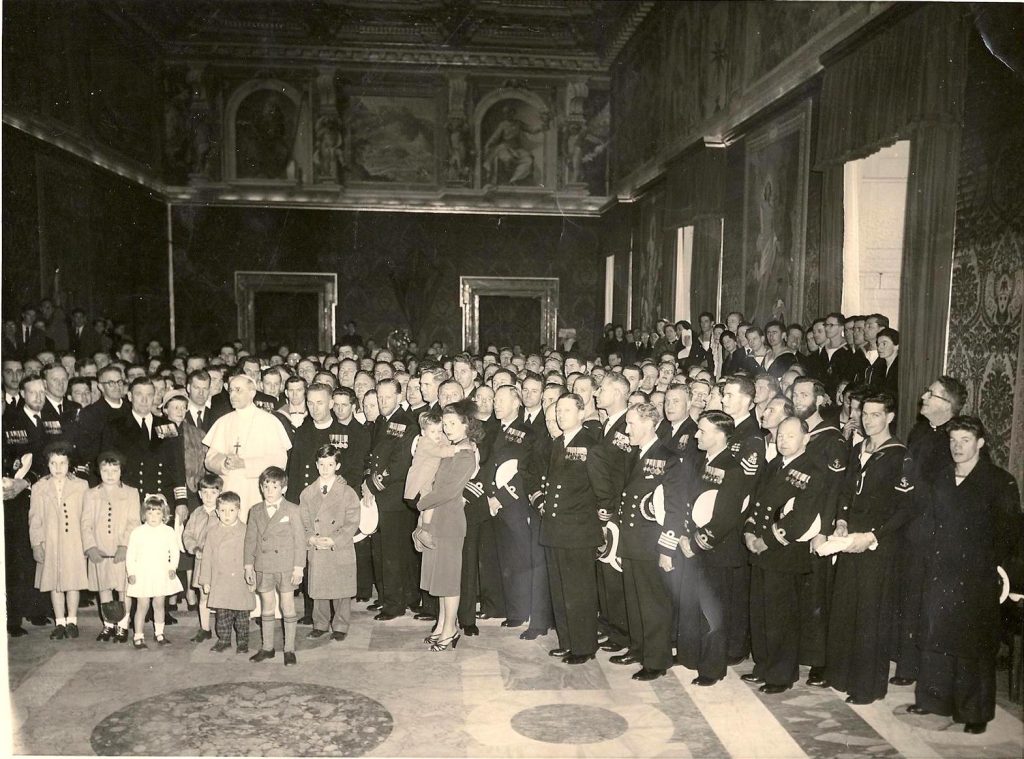 Mr John Ahern of Townsville picked the correct answer on 26th December when he advised ‘This was taken at the Vatican in 1956. Crew & family members were given an audience with the Pope whilst HMAS Melbourne was visiting Naples on the trip back to Australia.’

“36. At 1200A Friday 23rd at a Papal Audience in the SALA CONSISTORIALE in the Vatican in ROME, I had the honour and pleasure of presenting a party of 200 officers and men to His Holiness the Pope. The audience was also attended by a small number of Australian civilians normally resident in ROME. The Pope’s message (spoken in English) was to the effect that as seafaring men we go about the world seeing many lands, visiting many places and meeting many different peoples. This experience should breed in us a breadth of vision and understanding which should transcend all petty jealousies, quarrels and misunderstandings. Therefore as we go about the world we should be able to take with us, wherever we go, friendship and love.

37. At the suggestion of the British Mission to the Holy See, the Australian Minister had prepared an address from me to His Holiness. It had been sent to the Pope by the British Minister and hence I did not need to speak it.  The address was as follows:

‘Your Holiness. May I thank you, on behalf of all Australians her present, for your great kindness and condescension in receiving us today. Thus have our expectations been fulfilled. And may we fervently join with our Prime Minister in the message he sent to your Holiness on the great occasion of your Birthday and Commemoration of our Coronation, when he wished your Holiness on behalf of the people and Government of Australia – sincere congratulations and good wishes.’

38. It is understood to be extremely unusual for His Holiness to grant an audience during Holy Week, so that audience we were given was a mark of great favour.”

To our knowledge this is the only time a large contingent of officers and sailors from an Australian warship have been granted access to the Vatican and to meet the Pope. It really is an historic event. 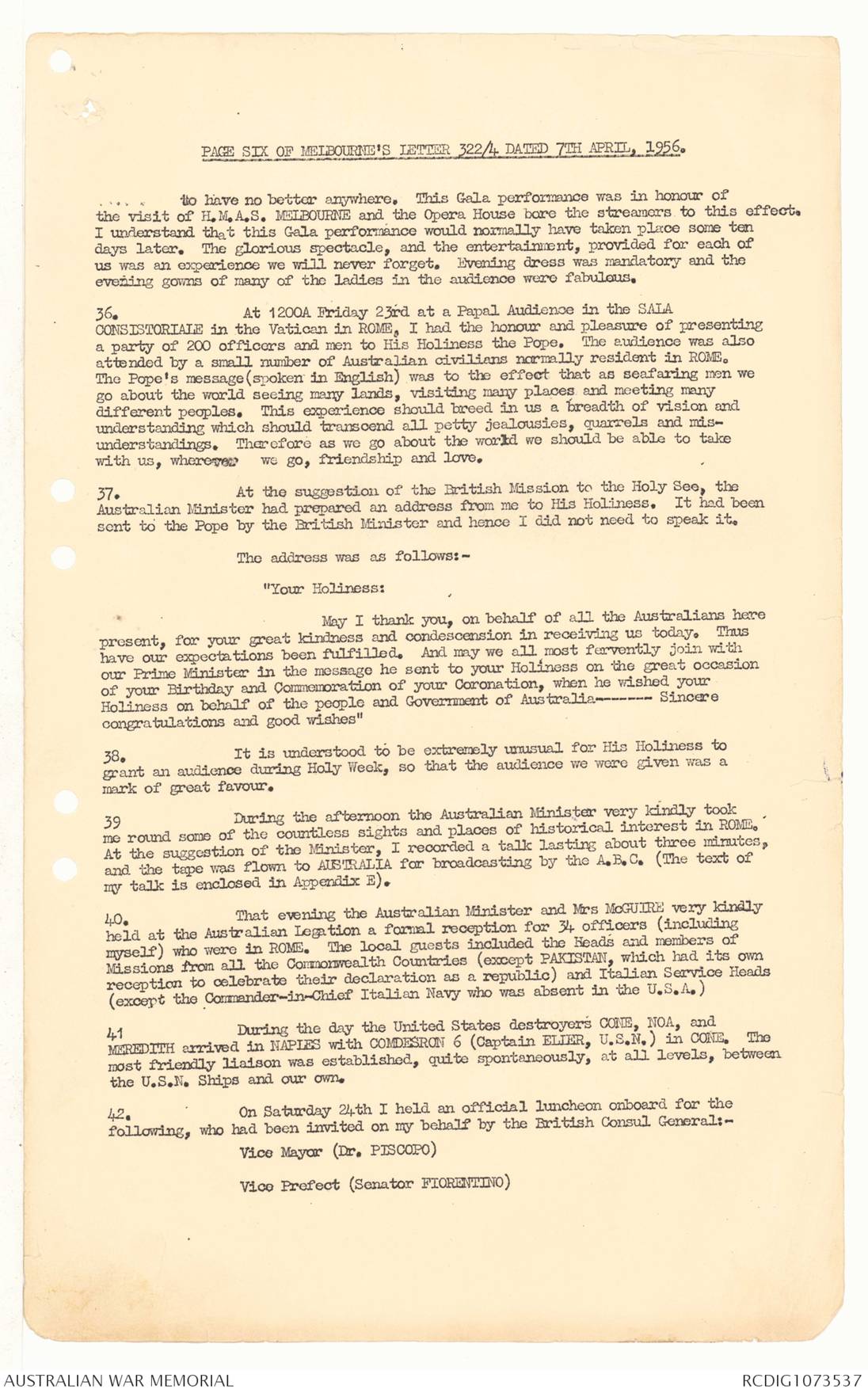