Mystery Photo number 27 has a very tenuous link to aviation, that’s for sure, but it was of such interest (to me, anyway) that I’ve decided to include it.  The photo is courtesy of the Australian War Memorial.  It was taken almost exactly 93 years ago today, so its older than most of us. 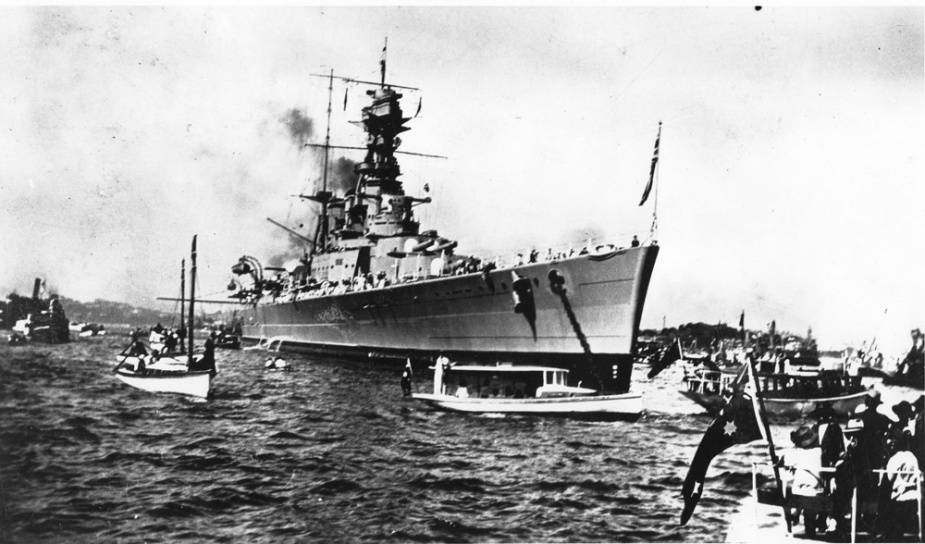 The flag in the foreground suggests an Australian port, and indeed it was:  the vessel is about to be moored in Sydney harbour and the year was 1924.  She was just four years old at the time, having been commissioned in 1920.

Readers were asked what the name of the ship in the photograph was.

Hood was the last battle cruiser built for the Royal Navy. Commissioned in 1920, she was named after the 18th-century Admiral Samuel Hood. One of four Admiral-class battlecruisers ordered in mid-1916, Hood had design limitations, though her design was revised after the Battle of Jutland and improved while she was under construction. For this reason she was the only ship of her class to be completed. As one of the largest and most powerful warships in the world, her prestige was reflected in her nickname ‘The Mighty Hood’ – in fact she was the longest ship in the Royal Navy – a record only broken recently by the new aircraft carrier Queen Elizabeth. 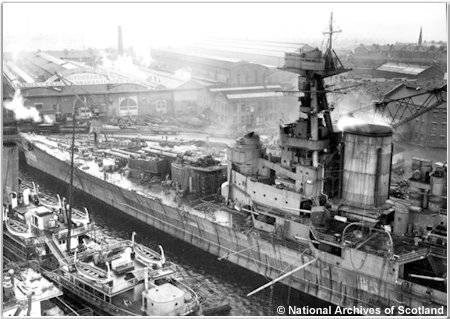 Hood under construction in 1918

Hood was involved in several showing the flag exercises between her commissioning in 1920 and the outbreak of war in 1939, including training exercises in the Mediterranean Sea and a circumnavigation of the globe with the Special Service Squadron in 1923 and 1924.  It was during this voyage that she visited Freemantle, Adelaide, Melbourne, Hobart and Sydney, where she attracted great interest (see photo below). 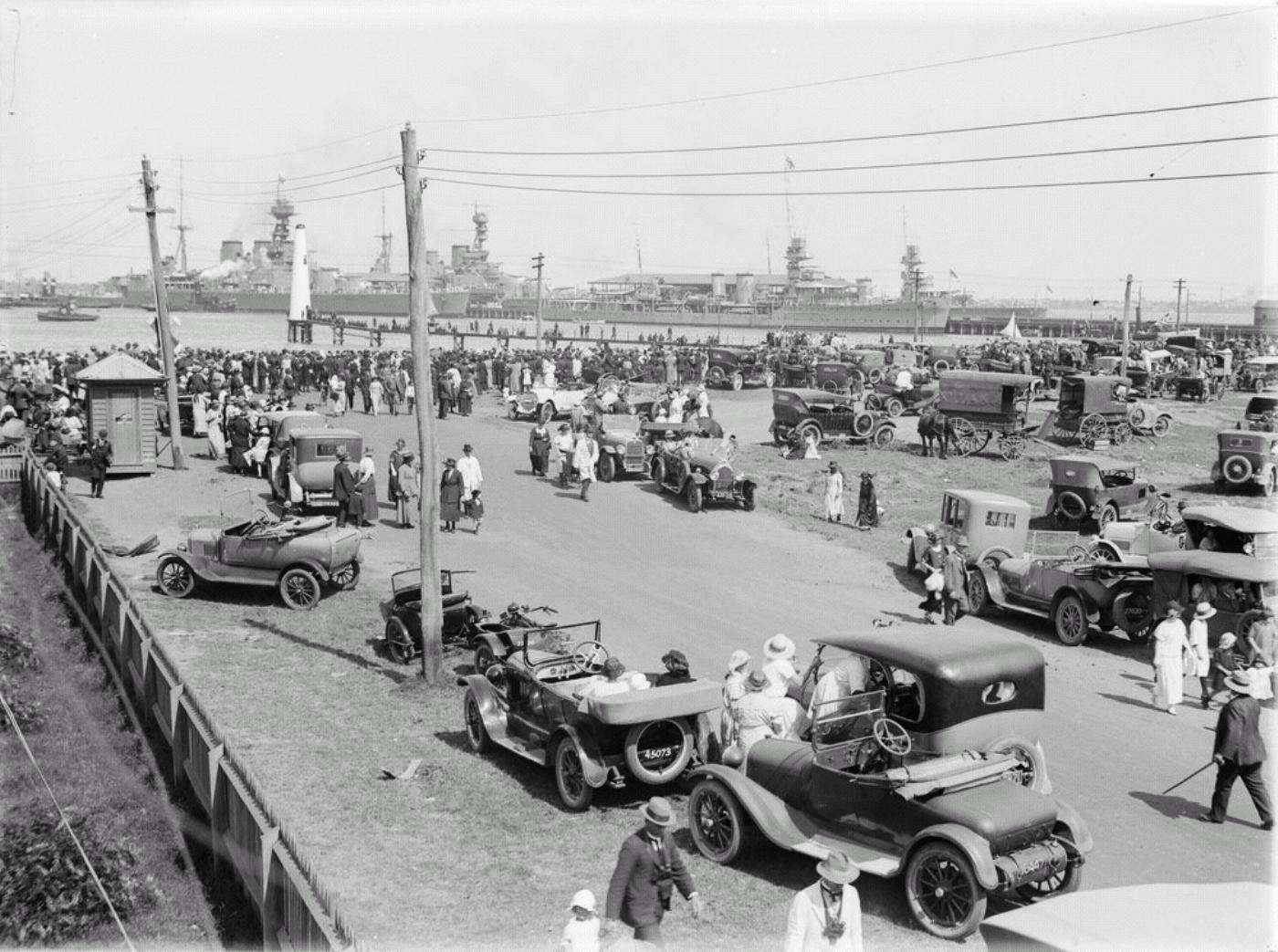 During her visits she was accompanied by HMS Repulse, who was also destined for an untimely end during WWII. Whilst in Sydney she accompanied the battlecruiser HMAS Australia out to sea where she (the Australia) was scuttled in compliance with the Washington Naval Treaty.  See photo below. A video of the scuttling can be found here. 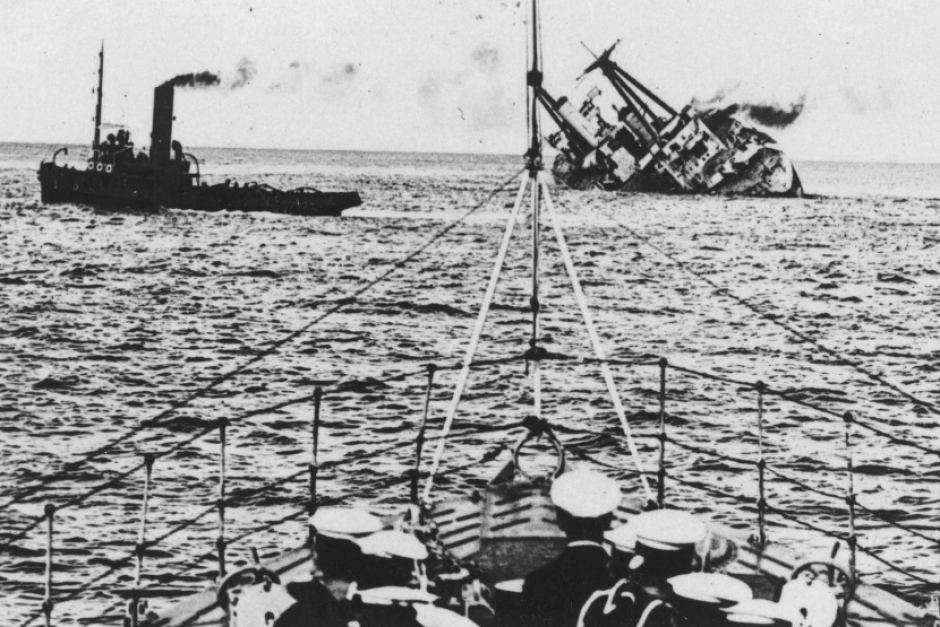 Below. A striking photograph of the Hood firing a broadside. She was the pride of the British Fleet and her loss with all but three lives was a great blow to the morale of the country. 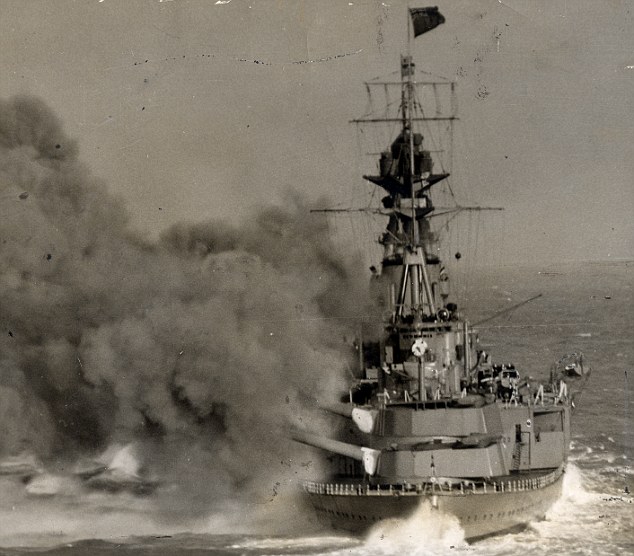 The Loss of HMS Hood

The story of the demise of the Mighty Hood is well known but an excellent documentary including original footage can be found here:

In May 1941, she and the battleship Prince of Wales were ordered to intercept the German battleship Bismarck and the heavy cruiser Prinz Eugen, which were en route to the Atlantic where they were to attack convoys. On 24 May 1941, early in the Battle of the Denmark Strait, Hood was struck by several German shells, exploded and sank. Due to her perceived invincibility, the loss affected British morale. In fact the vulnerability that caused her loss was known and had been scheduled for rectification in 1941 – but the start of WWII forced the ship into service without the upgrade. She was 21 years old at the time of her destruction.

Bismarck, of course, was sunk by ships of the British Home Fleet a few days later. An extraordinary documentary examining the wreckage of the Bismarck can be seen here.  It includes forensic analysis of the damage wrought by the lone torpedo that struck her rudder, and the subsequent shells of the British ships. The pilot of the Swordfish attributed to the torpedo strike only died recently.