Mystery Photo No. 40 was kindly provided by Ron Marsh. 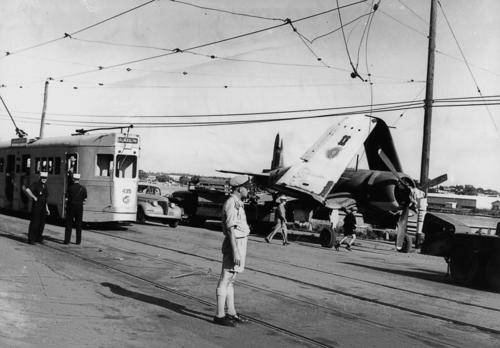 It showed an aircraft in some strife on what appears to be a busy street. There was a tram to the left which gave a clue as to the place and the year, as did the aircraft type (for those with eagle eyes).

The questions were:  What type of aircraft, where is it and a rough date (year).  Extra points were promised for those who could hazard a guess where the aircraft was heading and why.

The photograph was taken on Kingsford Smith Drive, Hamilton (in Brisbane) in 1945. According to the caption the aircraft had been unloaded from a carrier and whist being towed its wings became entangled its overhead tram lines.  The tram driver and conductor are looking frustrated and the schoolboy near the starboard oleo must have had a tale to tell.  The consensus was that it was a damaged aircraft being mored to the RN repair facility at Archerfield aerodrome.

Richard Kenderdine thought it was a Chance-Vought F4U Corsair, probably from the British Pacific Fleet (insignia painted out under wing) in 1946. He went on to surmise it was probably on its way to being dumped off the coast as part of the lend-lease agreement with the US. HMS Pioneer and Perseus were involved in transporting the aircraft to the dumping site.

Noting the photograph was taken about a year before the disposal of these aircraft, it is not likely that this particular Corsair – or others like it – was actually on the way to being dumped.  It is possible they were stored at Archerfield whilst the logistics of the dumping exercise was agreed, however, before being loaded back aboard a ship for the actual disposal. 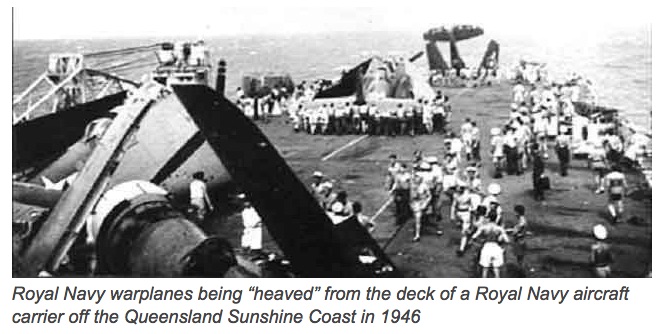 Of interest, a second photo of the same era was taken at Morningside, most probably alongside Cairncross Dock. Some smaller R.N. carriers were repaired there and aircraft stored alongside temporarily.There are Avengers ,Barracudas and Corsairs. 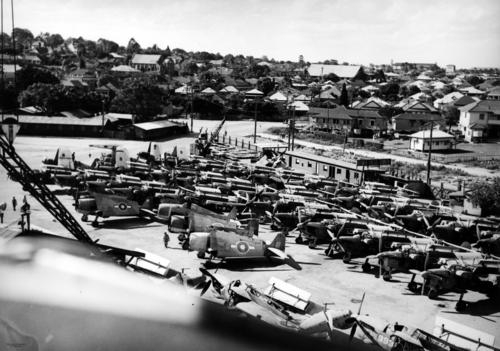 The caption incorrectly stated that they were aircraft under repair. maybe because folding wings were something the newspaperman knew nothing about. This photo was also 1945. They may have been from H.M.S. Slinger which was a American built light carrier used by the British Pacific Fleet to transport spare aircraft, which entered that dock for repairs. She had developed shaft problems,common to that class of ship, which had to come out through the flight deck – hence the offloaded aircraft.