Mystery Photo No. 47 was kindly provided by Ron Marsh/Kim Dunstan.  It showed HMAS Melbourne with another ship in close company. 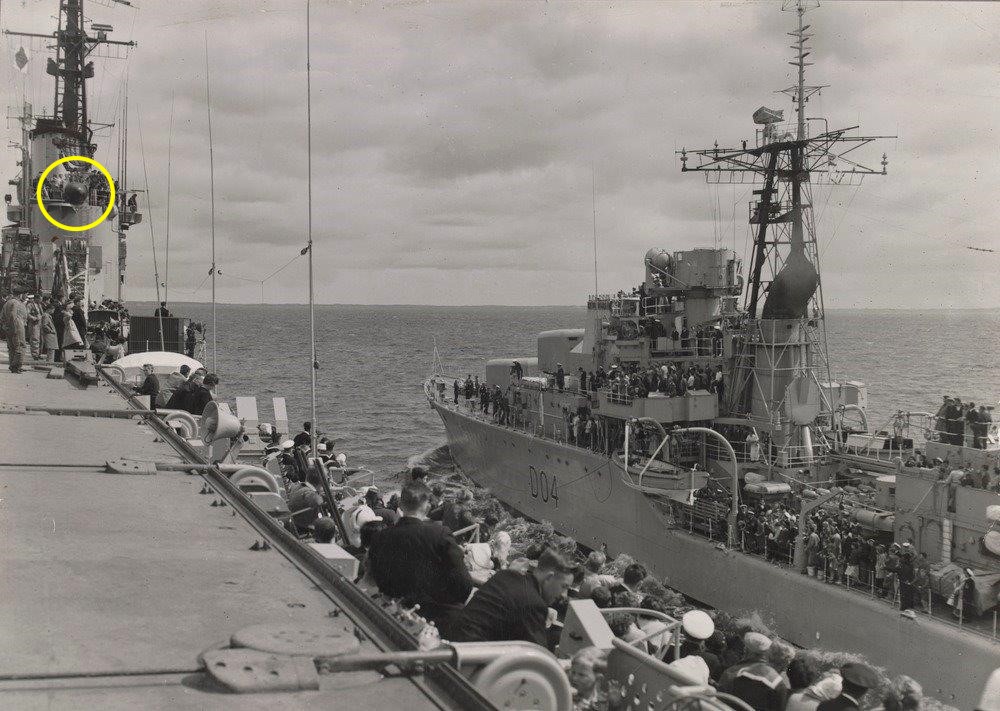 The Webmaster wanted to know:

This was a big family day on Port Phillip Bay on 09 November 1959 for HMA Ships Melbourne and Voyager.  Melbourne’s ROP reported some 700 guests were aboard, plus press representatives. The exercise took place in Port Phillip Bay, near Melbourne.

The device circled in yellow is a Sea Venom nose (complete with radar) on the rear of the island just below the big radar aerial. It was there to perform as an SCA (Ship Controlled Approach) radar for the returning Venoms and Gannets.

The radar had a general scanning mode +/- 60 degrees and (maybe) +/- 15 – 20 degrees up/down with a range (in the air) of out to about 40nm on aircraft and land to about 60nm. There was a “lock on” mode which was reasonably effective on targets out to 20nm in to as close as 150 yards or less.  At some point the display was then transferred to the pilot via a collimator and to his gun sight, enabling him to aim his guns.

Venom aircrew normally vectored themselves to the target from all angles (by night without any lights) down to the target at 12 o’clock and slightly high at 150 yards, so they could see the glow of the jet pipe. What made all this a bit hard was that the display had its base line (zero range) expanded to a straight line, not an arc, distorting all targets.  A  target at minimum range could be left or right and it was very difficult to decide which.

On board ship, the lock-on and the general search modes were not stabilised, so the pitch and roll of the ship made the adoption of a glide slope very difficult.

The device only appears in photographs between 1959 and 1963 or thereabouts, and may therefore have been installed during Melbourne’s August 1959 refit at Garden Island.

The history of how the Sea Venom radar came to be used that way can best be found in a book produced by the Fleet Air Arm Officers’ Association entitled “Fly Navy – The View From The Cockpit 1945-2000” (Edited by Lt.Cdr. Charles Manning AFC RN and published by Leo Cooper 2000). The excerpt we are interested in was written by Lt Bob McCulloch RN who wrote the piece.

“I was airborne on 9 August (1957) in a pair of Sea Venoms NF22s doing practice radar intercepts, when towards the end of the sortie the weather suddenly closed in. The only way of getting back on deck was going to be a primitive Carrier Controlled Approach (CCA), Air Traffic Controllers using the ship’s radar to talk us down until we were close enough to see the deck and land.

Such was the theory. In fact none of the ships’s radars was designed for such precise close-in work on a small fast-moving target, and not surprisingly we saw nothing of the ship on our first approach. Next time around, after a large missed approach pattern that consumed a lot of fuel, in our eagerness to get aboard we probably went a little lower than we should, for very shortly after the controller advised ‘Look ahead for the mirror…’ Eagle’s 150ft grey superstructure, bristling with aerials, flashed past our left wing-tip in the fog. It should have been on the other side. Half the line-up error and we would have flown square into the back of the funnel.  I made our feelings known to the controller as pilot Bunny Warren powered us back up into the cloud and all aircraft were then ordered to divert and land ashore.

RNAS Lossiemouth being closed for runway repairs, RAF Kinloss was equipped with precision Ground Controlled Approach (GCA) radar with which to talk us down on to their enormous runway.

Such was the theory. In practice Kinloss GCA operators were used to dealing with one or two slow-moving Shackleton maritime patrol aircraft movements a day. Eight or ten Navy jets, short of fuel, all clamouring for immediate landing in marginal weather, were another kettle of fish and things did not go smoothly. As far as Bunny and I were concerned, our fuel gauge told us we could not afford to take our turn in the Kinloss ‘stack’. Could base was 200 feet and getting worse. it was a matter of sauve qui peut [every man for himself]. We would do our own approach. Using the sharp coastal echo on my AI-21 radar, I conned Bunny down below cloud over the sea and into Findhorn Bay towards the western end of Kinloss’s east-west runway. But we shot past it without seeing anything until in desperation Bunny called for the runway control van to fire some Very lights. Seeing the glow of one of these, he did a very tight circuit, extremely low, and just managed to put the aircraft on the concrete before the engine stopped.  Both tyres burst on touchdown.  Our momentum was just enough to get us off the runway to let the others land, which they all did safely.

Back in Eagle the incident had stimulated the Boss of 894 Squadron, one Peter Young, and Senior Observer Ox Moore, into a bit of lateral thinking. Given that ship’s radars were useless for getting aircraft down in really bad weather, and given that the AI-21 radar in the Sea Venom was specifically designed to track small contacts, which it did very well – pick up range was about ten miles and Observers regularly conned pilots in as close as 100 feet behind the ‘enemy’ for a gun attack, close enough to see the red-hot turning ring up the victim’s jet pipe – why not try using AI-21 for Carrier Controlled Approaches?

And so it was soon after that we got back aboard I found myself sitting in a Venom parked facing aft just behind the island, using my radar to ‘talk down’ a couple of Venoms on simulated CCAs.  This was done by passing headings to steer to keep them on the ship’s extended centreline, and also their range to touchdown and the height they should be at every half mile as they descended.  Giles Carne piloted the first Venom on the first AI-21 controlled CCA. The rest, as they say, was history.

The trial was such an obvious success that during Eagle’s next short maintenance period at Rosyth a special ‘shack’ was built just aft of the island to ouse an AI-21 radar with all associated communications, and very soon after this hasty ‘modification’ was fitted in all RN fixed-wing carriers – the first dedicated CCA radar. Deservedly, Peter Young and Ox Moore were awarded a Herbert Lott Trust Fund prize for their contribution to Naval Aviation.

The only drawback was that to begin with we Venom observers, as well as flying, also made up the CCA talk down roster, making for some very long days and nights.  The only operational problem I recall was trying to sort out with the ship’s Direction Officers, who fed the aircraft into our approach pattern using their own big radars, which ‘blip’ was which. it was fairly important to be sure you were talking to the right one. Do I hear somebody say, ‘What’s new?'”

For those interested in Melbourne’s history, her ROP is available on line and provides a wealth of detail about life and times on the carrier throughout her career.  For example, earlier in the 1959, during exercises out of Singapore, two badly injured sailors from a USN escort were transferred to Melbourne for medical attention. One sailor who had his hand blown off needed hospital attention in Singapore. As it happened a RAF Sunderland aircraft was participating in the exercise and was asked to transport the sailor to Singapore. Apparently the sea was a bit choppy and the pilot was reluctant to alight on the water, but Melbourne made a slick on the water a la ‘Walrus-style’ and the Sunderland was able to land and collect the sailor. Good to see those old Navy tricks can come in handy.

Our thanks go to Max Speedy, who provided some of the technical detail above.