Mystery Photo No.52 was forwarded by Ray Godfrey.

The Webmaster wanted to know what was going on in the following photograph: 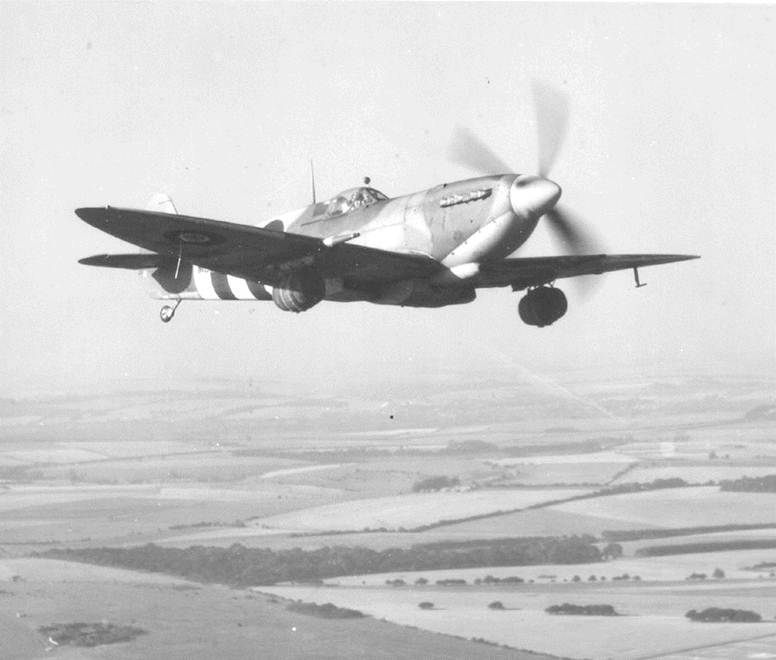 The Mystery Photo was extracted from an article on the website “war history on line” and the answer is reproduced here, as provided by Elaine Smith in her website article:

Only a few days after the Allied invasion of Normandy on D-Day, the dust and heat of the tortured area stirred up quite a thirst in the British boys on the front lines. Young men who had survived the brutal landings and pushed several miles inland found poisoned water and only a weak cider to drink. Soldiers wishing for a fine pint of beer was a common occurrence.

The boys needed their beer. Anyone who has been around young men knows they will find a way to get their beer. And it wouldn’t bother them if the delivery system is illegal or otherwise non-regulation.

Upon hearing of this dilemma through a Reuters correspondent report back in London, the Henty and Constable Brewery offered free beer to the British armed forces in France. Men called “sourcers” sprang into action. Often involved in black market goods, these men would devise a way to get the beer to the soldiers.

Volunteer pilots from the Royal Air Force soon were in the bootlegging business. Jettison fuel tanks were steam cleaned, and the brewery filled the tank with beer. A quick flight up to 15,000 feet thoroughly chilled the shipment sloshing about in the tanks. 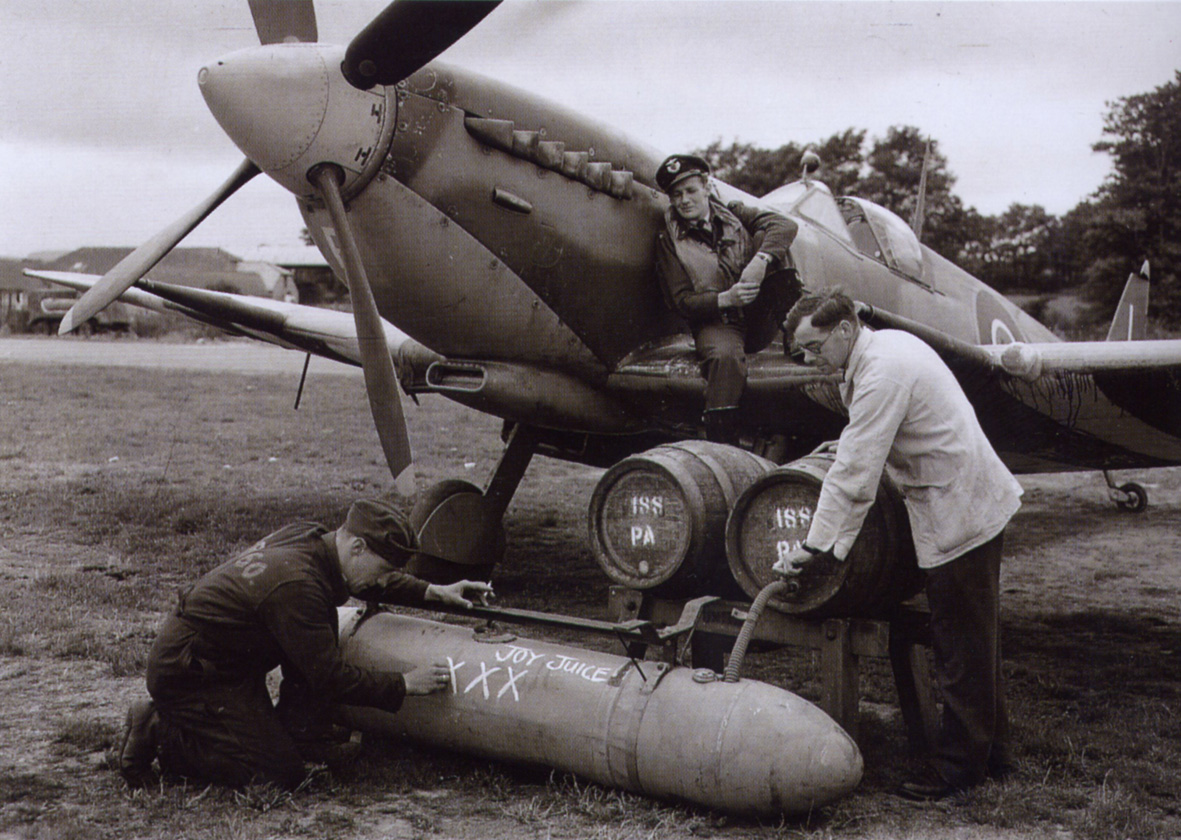 The pilot of one of the first beer runs received instructions to follow the salvo fire from the battleship Rodney and land on a small strip just to the south of the bombarded area. He and two other pilots flew across the channel and reduced altitude to 5,000 feet. He was quoted saying,

“The welcoming from the Rodney was hardly inviting, but sure enough, there was the strip. Wheels down and in we go, three Spits with 90-gallon jet tanks fully loaded with cool beer.”

Neither were there any happy Brits greeting the planes as they taxied near the end of that particular runway. A man appeared from behind a tree and rushed to the Spitfires. He pointed to a church steeple and quickly explained German snipers had been taking shots at them all day. “You better drop your tanks and get off before it’s too late.” The three planes did just that and got out of there in a hurry.

Nonetheless, the “erks,” as the infantrymen were called, drank every drop. Another pilot said he hated making the beer runs as everyone at the airfield was watching and anxiously awaiting his safe landing. And if a rough landing damaged the tank filled with beer, the pilot responsible was reviled and despised for a period of time – until he successfully delivered a shipment of beer! 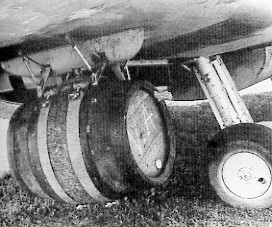 Beer barrels attached to the wings.

Enterprising Royal Air Force personnel also modified the Spitfire’s bomb racks to fit barrels of beer to the wings. The beautiful aircraft would cruise through the sky with a barrel attached to either side of the fuselage. An outfit in Sussex took the idea one step further, designing a “Beer Bomb.” Wooden casks were fitted with streamlined nose cones, giving the appearance of a real bomb.

Especially after refueling stations were established in the conquered territories, the jettison tanks, made in London, were no longer needed in battle and were instead filled with Black Eagle brews from Westerham. The planes would have “Bitter” on one side, and “Mild” on the other.

The Americans got onto the bandwagon after seeing the British operation, and an Icelandic pilot with modified tanks on a P51 Mustang successfully cart beer from London to France. One remark was, “…those Brits really know how to go to war.” Shortly after that, Mustangs also made the beer runs, delivering the brew to the equally thirsty boys in the US Army.

In addition to the Spitfires and Mustangs, the Hawker Typhoon was also used in these goodwill missions. The pilots must have felt they were providing a humanitarian service. Often, after completing their delivery, the fighters would continue to strafe a freight train or bomb a building or two. Obviously, the beer bombs were saved for the British soldiers.

The beer runs were unofficially approved by the brass and continued until a major shortage occurred in all of England. But by then, breweries in the path of the Allied forces were pressed into service, likely to the relief of the local survivors as well as the soldiers of World War II.

Another source, kindly forwarded to the webmaster by Ron Marsh, stated:

“We were also making ‘jettison’, auxiliary fuel tanks for fighter planes to carry extra fuel to enable them to fly further into Europe and still be able to get back home. Once refueling facilities were established over  there, the Westerham Brewery used to fill those  auxiliary  non-returnable  petrol tanks  with  Westerham Ales for our troops in Europe. Black Eagle lorries delivered it in barrels to Biggin Hill where the auxiliary dual purpose tanks were filled with Bitter on one side and Mild on the other. We made them of 16 gauge metal with baffles for safe landing, the RAF’s version of the brewer’s dray.”
Westerham and Crockham  Hill in the War

In his book “Dancing in the Skies”, Tony Jonsson, the only Icelander pilot in the RAF, recalled beer runs while he was flying with 65 Squadron. Every week a pilot was sent back to the UK to fill some cleaned-up drop tanks with beer and return to the squadron. Jonsson hated the beer runs as every  man on  the squadron would be watching you upon arrival. Anyone who made a rough landing and dropped the tanks would be the most hated man on the squadron for an entire week.(GaëtanMarie)

The famous Spitfire test pilot Jeffrey Quill stated “After D-Day in 1944, there was a problem about getting beer over to the Normandy airfields. Henty and Constable (the Sussex brewers) were happy to make the stuff available at the 83 Group Support Unit at Ford near Littlehampton. For some inexplicable reason, however, beer had a low priority rating on the available freight aircraft. So we adapted Spitfire bomb racks so that an 18-gallon (82-litre) barrel could be carried under each wing of the Spitfires which were being ferried across from Ford to Normandy on a daily basis. We  were, in fact, a little concerned about the strength situation of the barrels, and on application to Henty and Constables for basic stressing data we were astonished to find that the eventuality of being flown on the bomb racks of a Spitfire was a case  which had not been taken into consideration in the design of the barrels. However, flight tests proved them to be up to the job. This installation, incidentally, was known as Mod XXX Depth charge.”
Source: Air International, September 1976; Aviation News,8-21April1994

Note:  One of the more detailed answers we received was from Nev Smith, who suggested that it was a Mark IX Spitfire delivering beer to Saint Croix, France in 1944.  The webmaster has been unable to verify this very specific information, but bows to greater knowledge!