Mystery Photo No.53 showed an Aussie A4G Skyhawk on the catapult of a carrier, ready for launch. 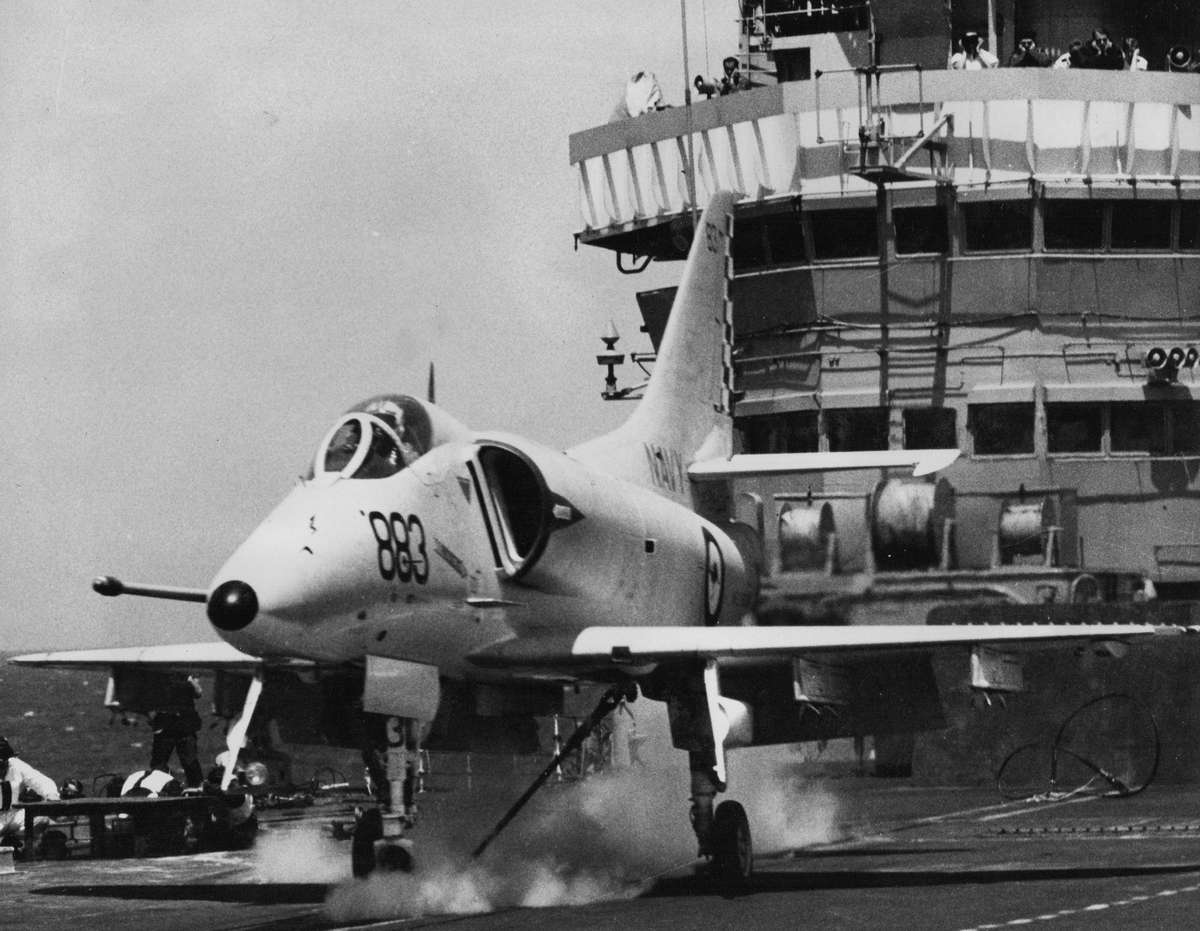 We asked readers to tell the webmaster:

Before we answer the questions, we need to go back a bit.

Faced with an enormous bill to replace obsolete Navy FAA infrastructure, the Australian Government decided in 1959 to disband the Fleet Air Arm’s fixed-wing capability in 1963, and to pay off HMAS Melbourne.

But Indonesia’s ties with Moscow and her vast purchase of Soviet military hardware, together with the 1960-62 tensions over Dutch West Papua (Irian Jaya) and 1963-66 Malayan Confrontation, were the cause of serious disquiet. Likewise the reach of Indonesian and Chinese strike bombers, and the spread of communist insurgencies dictated a re-think. By 1964 the life of the ageing Gannets and Sea Venoms had been extended for another four years, and the search for replacement aircraft had begun.

The list was quickly narrowed to types that would not require a larger aircraft carrier, and, after deck trials, orders were placed for 14 Grumman Trackers and 10 A4G Skyhawks.

Above.  A top secret assessment of the strike range of Chinese and Indonesian long range strategic bombers in the early 1960s.  The treat was real enough to abandon plans to phase out the Fleet Air Arm’s strike capability, and to purchase new aircraft for HMAS Melbourne.

Melbourne travelled to San Diego in October of 1967 to collect the new aircraft, delivering the first of them (by barge in Jervis Bay) on 21 November.

But although she could ferry the new types, Melbourne could not operate them. To do that she needed extensive modification, including an upgraded catapult, new radars and EW equipment and AVGAS storage. The refit also provided an opportunity to update living accommodation, provide better water distillation, and the overhaul of essential machinery.

Melbourne entered refit at the end of November 1967. She was not to go to sea for another 15 months.

In the meantime,  the Fleet Air Arm had a bunch of new aircraft but no ship on which to hone their skills.  Fortunately, HMS Hermes visited Australian waters a year later for Exercise ‘Coral Sands’ – in early November 1968 – and both Trackers and A4s had the opportunity to use her deck.

You can see a video of the Hermes’ deck operations here.