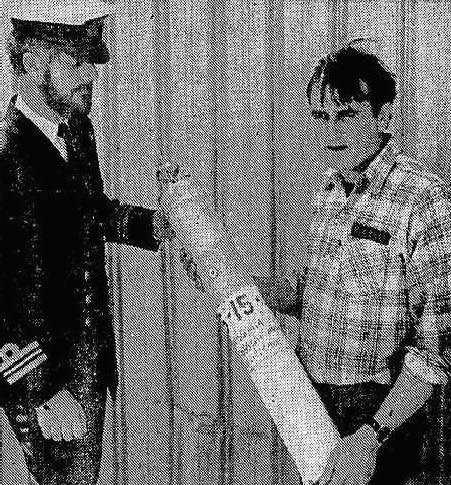 Mystery Photo No.54 was a poor quality image showing the late LCDR Barry Bromfield discussing a phallic object with another man.  The photo appeared in the Canberra Times of 26 September 1980.

Barry was working for the Directorate of Naval Aviation Policy based in Canberra, and was therefore in a good position to call in to a factory in Queanbeyan to talk to the foreman of Snowy Welding Pty Ltd. The subject was on of Navy’s Sonobuoys, which had fallen from a Tracker whilst it was making an unscheduled approach to nearby RAAF Fairbairn.   The aircraft landed there and it was noticed one of the sonobuoys was missing.   Shortly afterwards RAAF authorities received a call from Snowy Welding to say their factory had been struck by the buoy.    You can see the dent on the factory wall behind the two men.

Sonobuoys are carried in spring-loaded racks in the aft section of each engine nacelle (see photo above, right) and are held in place by electro-magnetic release units.

We received a number of answers to the photo, including this one from Andy Brown:

“The photo shows Barry Bromfield and the Manager of Snowy’s Welding shop Queenbeyan holding a wayward channel 15 SSQ 41 Sonbouy which had released, uncommanded, from an S2G Tracker which was carrying out a touch and go at RAAF Fairburn in 1978. Why am I so familiar with this story ? I was the POATWO who had signed off on the loading certificate and therefore was deemed responsible, according to initial reports, for bombing a childcare centre. The facts are it hit the roof of business and slid down the roof onto the ground not even waking the shop’s dog sleeping nearby. Being an engineering shop the noise generated within the shop muted the sound of the direct hit. Subsequent investigation found the # 15 Sonbouy launcher tube was cracked internally which allowed the latching gate to open. The Ch 15 was always carried as for SAR purposes which may have led to the number 15 tube being cracked.”