Mystery Photo No. 55 originated from the National Archives of Australia.  It shows the foredeck awning of an Australian capital ship, with something going on that obviously captured the interest of those on it. 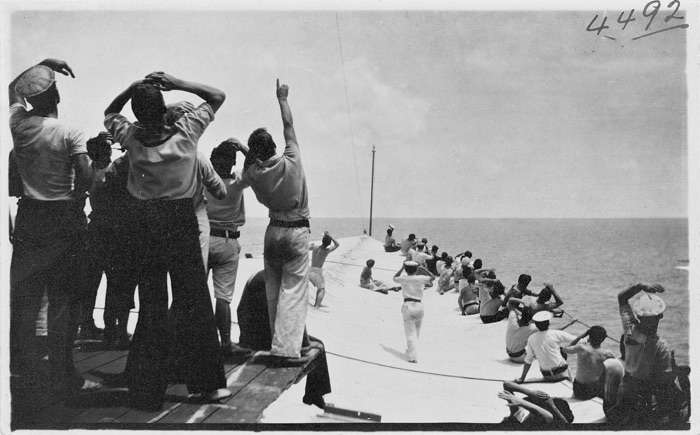 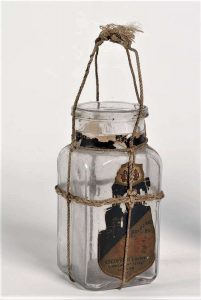 Both the position/timing of the ship and the event they are watching was of significant and separate historical interest.   The smaller photo to the right, showing a Escoffier pickle jar, was given to help work out what’s going on.

We asked our readers what the name of the ship was, where was she at the time and what had attracted the interest of her crew.

The photo shows the canvas awning over the foredeck of HMAS Sydney (1) on 10 December 1919 on her return journey to Australian following the end of WW1 – after years of service with the RN in the Caribbean and North Sea.  The sailors are  looking up at Ross and Keith Smith’s Vickers Vimy flying overhead towards Darwin. The second photo shows a jar used to drop a message of thanks to HMAS Sydney from Ross and Keith Smith who were flying overhead. 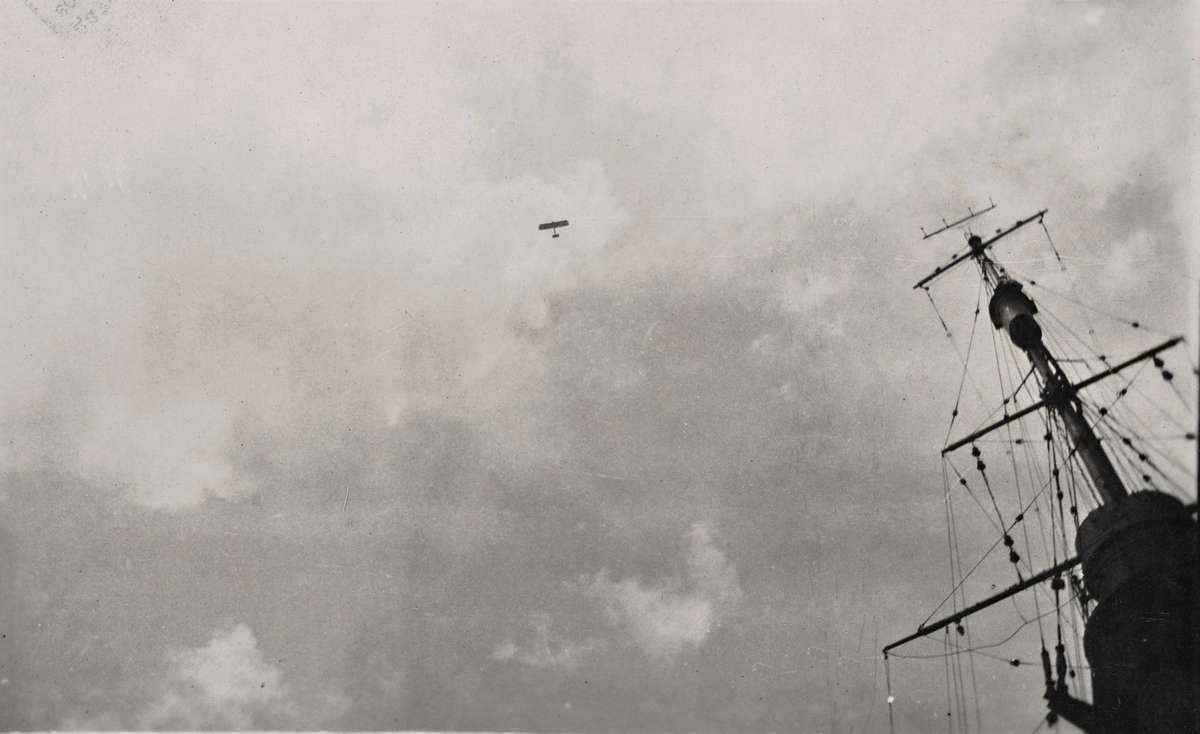 Flying across the Timor Sea in a Vickers Vimy on the last leg on their record-breaking flight from the UK, 180 miles from Port Darwin, Ross and Keith Smith spotted HMAS Sydney (1) which was positioned to guide them towards Darwin in case of need. However, the aircraft was on course according to Sydney’s Captain H. Cayley, saying it was ‘proof of wonderfully accurate navigation on the part of the aviators’.

As the Vimy had no radio the Smith’s decided to drop a message of thanks to Sydney letting them know all was going well. Using string and a hastily made parachute they dropped to bottle which landed in the sea near Sydney. The bottle was an Escoffier pickle jar – presumably the contents were eaten  en route from London. 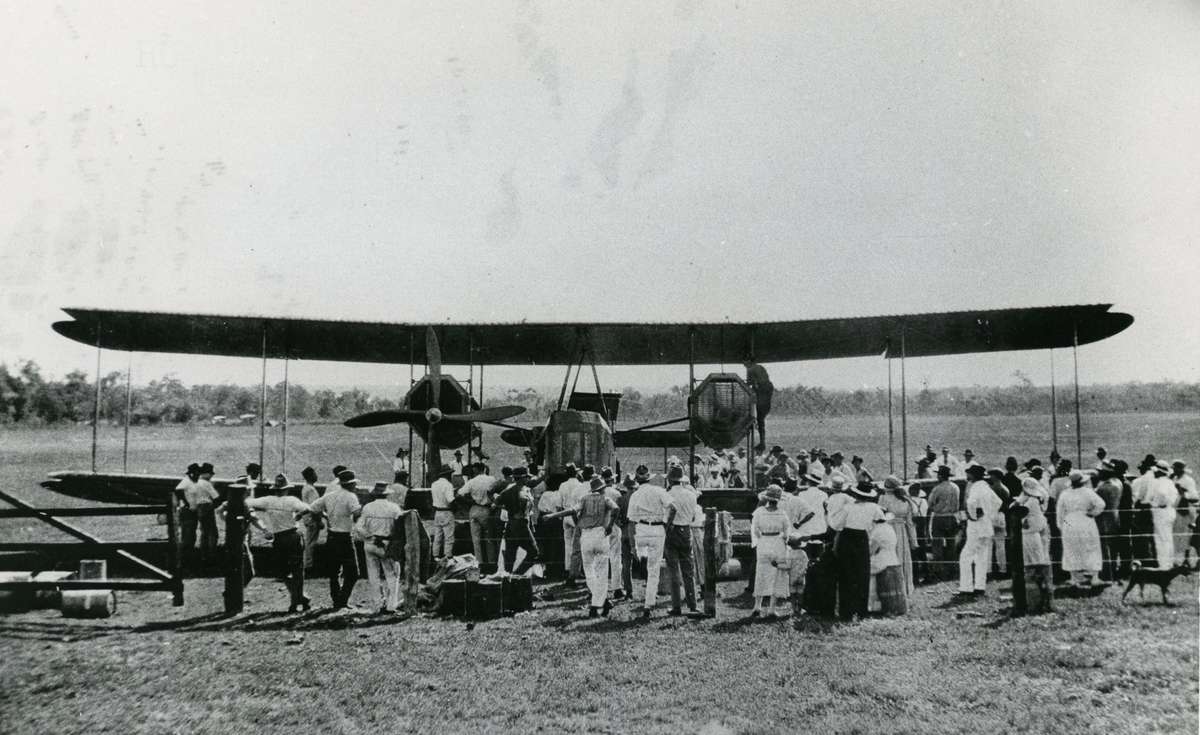 Above: Vickers Vimy at Darwin on arrival 10 Dec 1919 with a welcoming crowd (port engine still running) 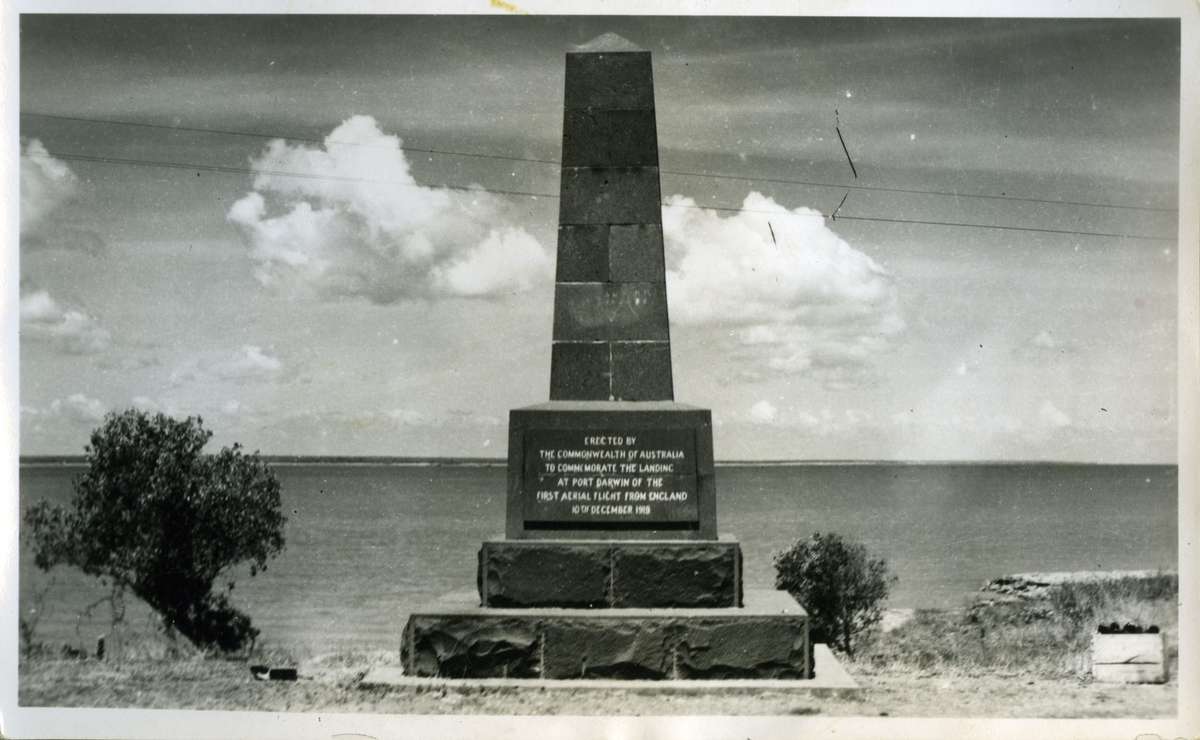 Memorial near Darwin, commemorating the flight.

The epic flight had been mostly over land and this was the first lengthy journey over the sea for the Vimy and the grateful Smith’s (and aircrew Sergeant Bennett and Sergeant Shiers were glad of Sydney’s presence in case of a problem. As it happened they landed at Darwin in about two hours to a rousing welcome.

The original message from Ross and Keith Smith together with the bottle were donated to the Sate Library of NSW by Captain Henry Cayley of HMAS Sydney in 1922.

Material and text by Kim Dunstan.