Mystery Photo No. 58 was extracted from a social media page. 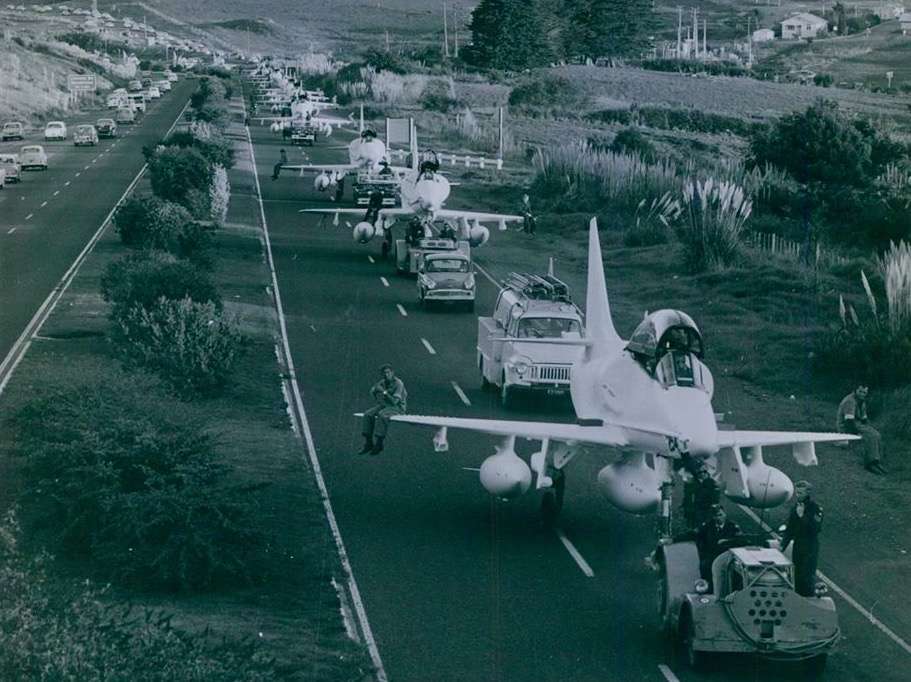 The image showed bunch of Douglas A4s being towed along a National Highway, and asked the question where the highway was, and the approximate date of the event.

The date was 17 May 1970.  The USS Okinawa, an Iwo Jima class amphibious assault ship, arrived in Auckland Harbour carrying 14 brand new Douglas A4-K Skyhawks for the Royal New Zealand Air Force. They were carefully unloaded and transported by road from Freyberg Wharf to Whenuapai Air Force Base, about 26 km to the north west.

Their safe arrival was something of a miracle – firstly, because there had been stiff opposition to purchasing them.  The Canberra bombers No.14 Squadron were, however, old and increasingly unreliable.  British fighter production had been axed by the UK White Paper in 1957, so the Kiwis turned to the United States, which offered several types that might be suitable, including the Northrop F5-E Tiger, the McDonnell Douglas F-4E Phantom and A4-E Skyhawk,  and the General Dynamics F-111. Ultimately the Skyhawk was selected although the NZ Treasury argued strongly for the cheaper Tiger.

Designated A4-K (“K” for “Kiwi”) the aircraft were essentially the A4-E model with minor changes specified by the RNZAF.  Ten single seat A4-K and four dual-seat TA4-K aircraft were embarked aboard Okinawa for passage to New Zealand, secured on the upper deck in weather-proof wrapping.

After leaving Pearl Harbor in Hawaii, the ship struck a storm with 80 knot winds, and the captain at one stage considered pushing the aircraft into the sea to save his vessel – but the weather subsided just in time and they arrived safely on 17 May 1970.

The aircraft were carefully unloaded at Freyberg Wharf and towed by a variety of vehicles though the streets of Auckland and thence by the highway to Whenuapai – a delicate operation as they had to negotiate narrow streets and tramlines, amongst other obstacles.  By the end of the day all 14 were safely stored at the base, however. 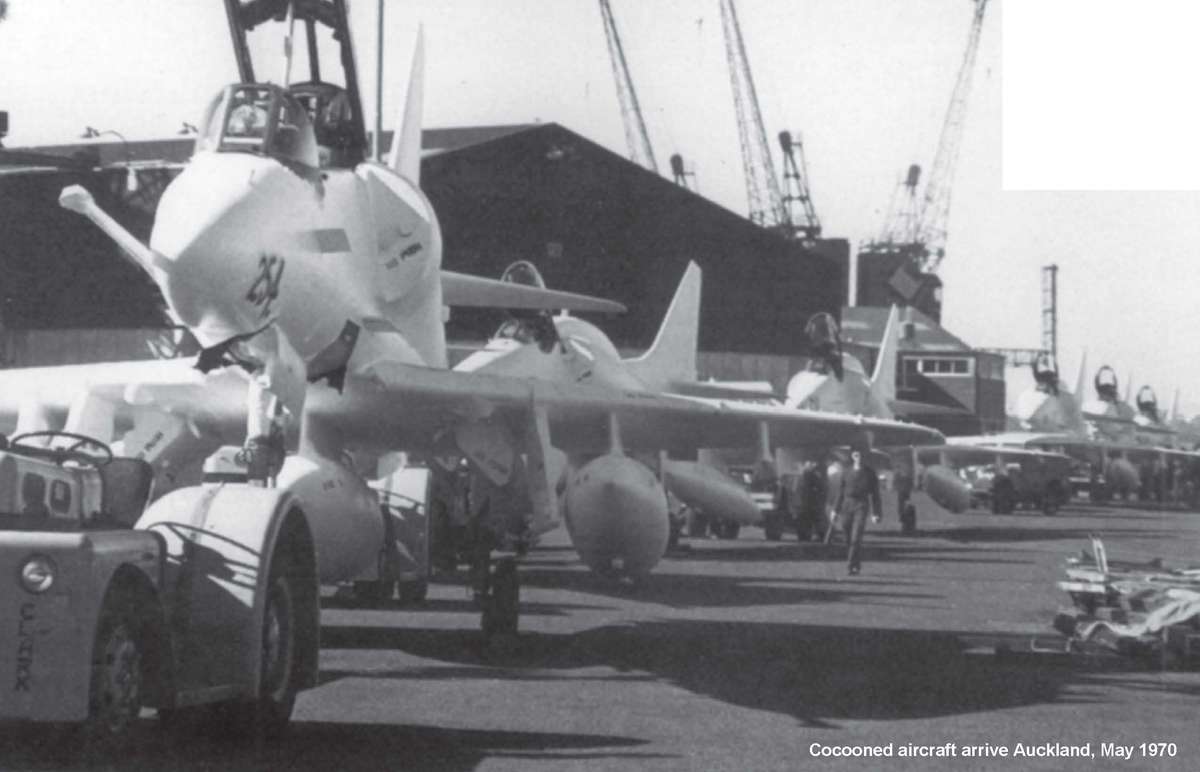 Above. Kiwi Skyhawks disembarked in Auckland Harbour, ready for their road trip. Below right: An aerial view of the Skyhawks threading their way though Auckland CBD.  Below Left, top to bottom:  Some of the difficulties/obstacles they encountered can be seen here (click any image to enlarge).  Images by Don Simms. 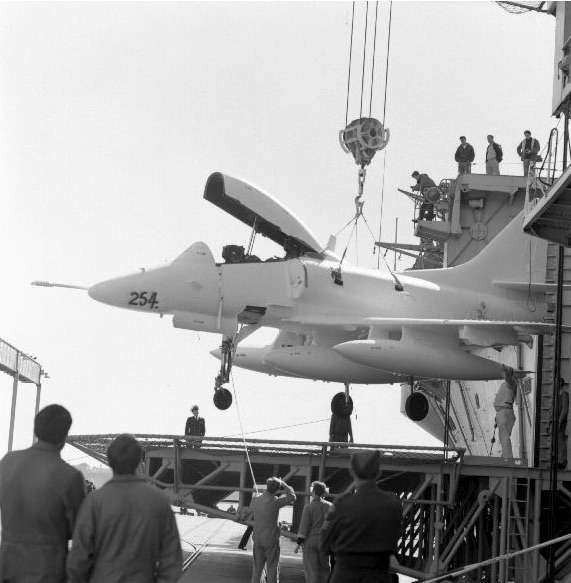 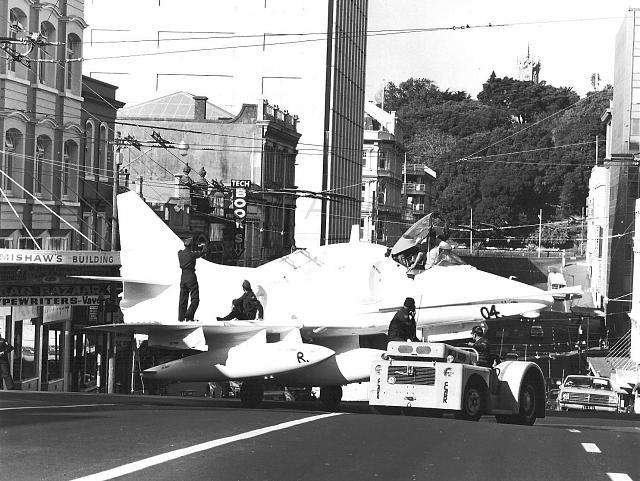 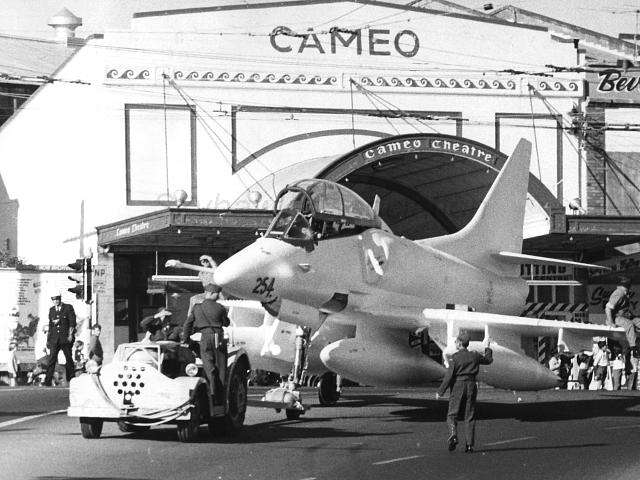 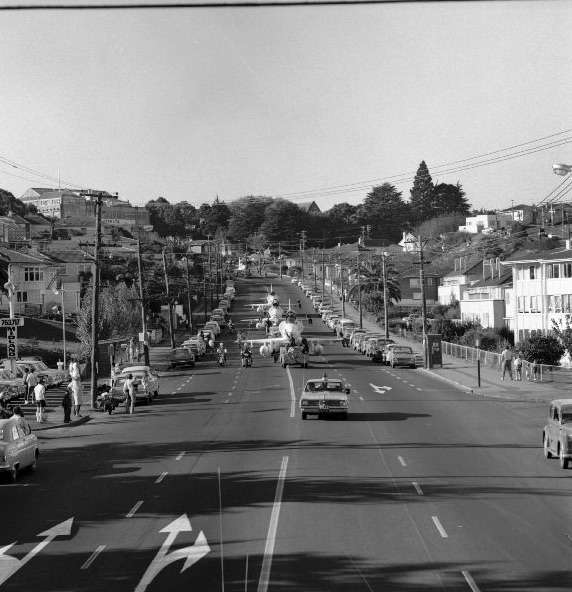 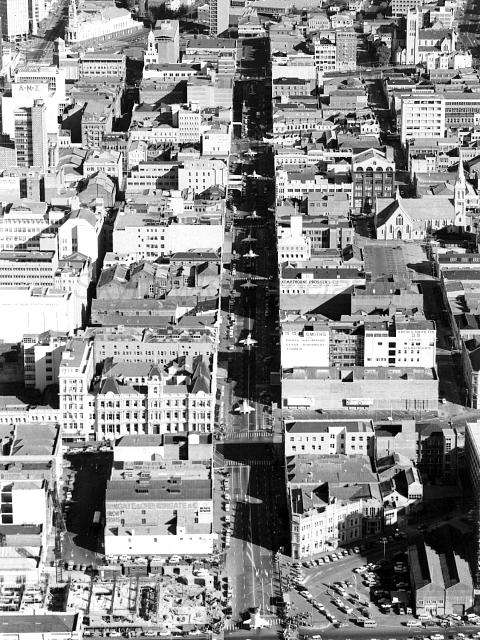 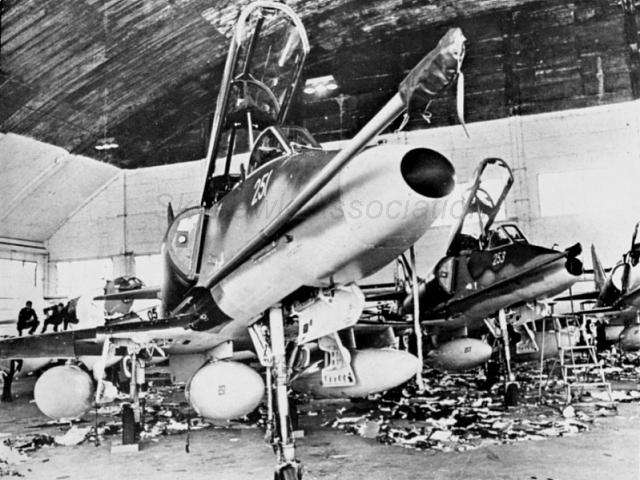 Right. Once at the Air Force Base the protective coating was stripped off each aircraft and they were prepared for the one hour flight to RNZAF Base Ohakea, ready for service with No 75 Squadron. A new era in RNZAF history had begun.